As part of my quest to find a set of rules I really like for my Neo-Assyrians we had a go at ADLG. One of the MNG's lurker members, Patrick, came along to induct us into its mysteries. Chris A was supposed to join us, but he got stuck at work. For the game we had me & Steve (with Babylonians) and Dave and Phil with the Neo-Assyrians. Probably stacked a little against us as Dave has the rules and has read them, and Phil has dabbled. 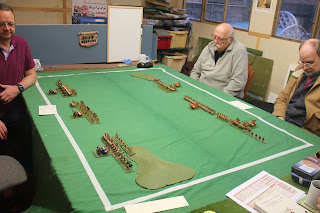 I set it up with not much scenery as I find that best for learning rules. We massed our chariots on our right, with a view to smashing in their left wing and turning their line. 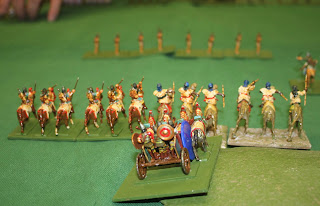 I had command of the right. I had to raid a few army boxes to make up the armies, as there's no consistency between rule sets in the case of these armies. Those camels are bow armed, by the way. The man with the big blue counter is a command figure. In other deficiencies, all the figures should be on 60mm square bases, except the skirmishers. 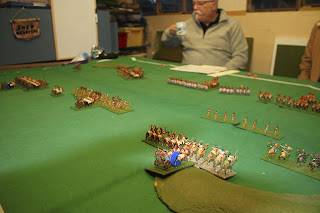 I've got some light horse out on my right, trying to get round Phil's flank. I'm using my light infantry to protect my more valuable units. Note to self for future reference - these units are not expendable as their loss counts the same to eventual victory or defeat, so this isn't necessarily clever. 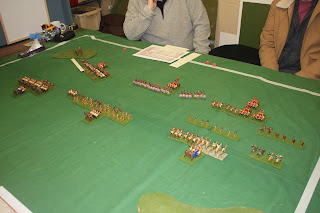 Steve has got his light horse out on the left flank to trouble Dave's wing, whilst he lines up his chariots. Phil has split his centre to send some heavy infantry to support his wing. ADLG is a PIP-style game, so there is an element of risk in this, but the Assyrian commanders are better, so they get more CPs or PIPS, so less so for Phil than for me. 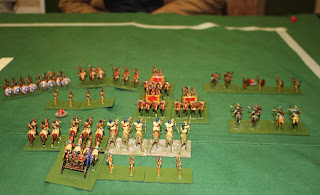 I reckon I'm good here, as my camels neutralise his chariots, and my horse is slightly better, I think. All that can possibly let me down is not having enough CPs to keep all my stuff in the game. 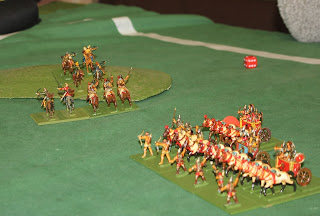 Dave is forced to peel units off to deal with Steve's light horse, which is up hill of him. 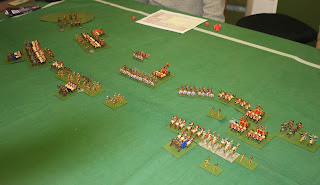 We have more bowmen in the middle, but this numerical advantage is off set as the Assyrians have better armour, and really big shields. The cunning plan to shoot them up and cause lots of damage before the eventual melee has not gone well, and we, in fact, lose a unit first to archery. 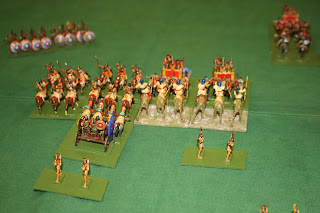 On my wing Phil has been forced to allocate his General to shore up the light cavalry melee off right, which we're starting to get the upper hand in. 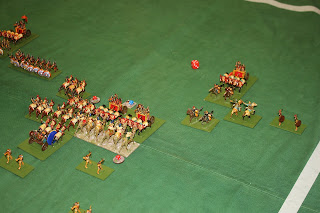 In some mixed results we break some of their cavalry, and then lose a light horse unit. I think at this point we were winning. 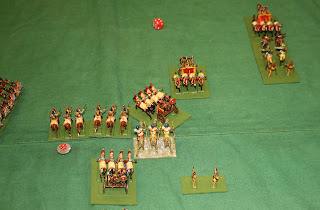 It swings even further in our favour as although I lose a camel base, we kill more cavalry and a chariot.  Alas my light horse is now surrounded. 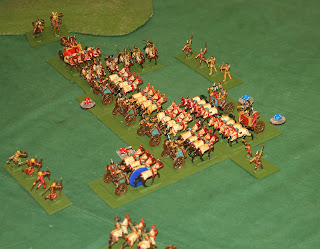 On Steve's wing we are inflicting lots of damage, but we have been caught in the flank on the end. This was my fault as I wasn't expecting a unit to about face and charge all in the same turn (we had a conversation at this point about how you get flank attacks, as you cannot turn in on a unit's flank or rear without first being past its front line, despite how close you are and how much movement distance you have). Steve survives, however, and is well set up to deliver a crushing blow next turn. 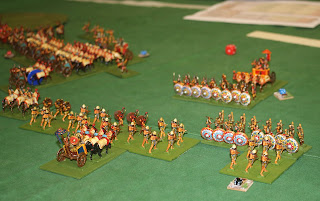 The Assyrians finally finish their long trudge through the arrow storm, and contact our infantry. We have failed to deliver as much damage as I had hoped. 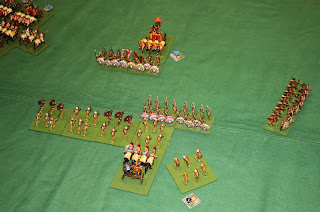 We lose one unit in the melee. However, we are starting to do damage to the units at the back with the General. They are both now really vulnerable. 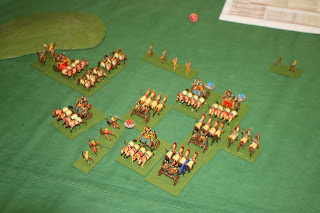 And then Steve completely blows the left wing with a succession of dreadful die rolls. Not a single combat won, despite having between +1 and +4 advantage in all of them. We're now close to cracking. 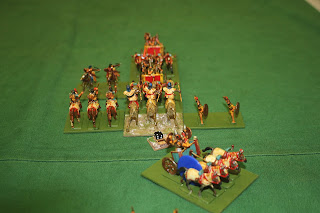 I follow up by doing the same on my flank, and then Phil kills my general. 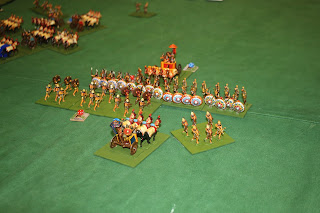 Our superb archery performance in the centre was a one time thing, and we don't break any units, and instead lose another one. 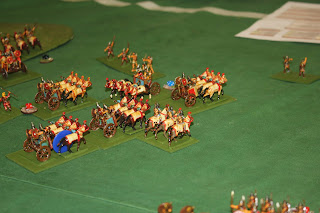 On his flank Steve does break another unit, but when we do the end of turn count up we've lost. Phil & Dave were only 3 points of breaking, however, so it was a close game.

So what do I think of ADLG? Well, it's not an original comment, but I can see where the bits have come from. I can spot DBx mechanisms, and FOG and Armati and probably some Impetus too. It looks like it's been built to address what the designer didn't like in all the other systems as much as what he did like. Consequently there seems to me to be not an original thought in the whole thing which I find disappointing.

However, it does work. Bit clunky in place, but it works, and it gave a tense and close game. I do not, generally, like PIP style games, and they're core to the system here, but the shortfalls are mitigated to some extent, with the General "free move" concept.

Conclusion? Happy to play again but I don't see it becoming my "go-to" set of Ancient rules.