So it is that time in May when we head off to Central MK Shopping Centre for the Campaign Wargaming Show. This is our most local show, and a bit special as it takes place in a shopping mall and is so free to enter. This means we get to meet real people, not just wargamers.

We were there with our Edgcote game. This is still in development, but we're making progress. It has moved on from Alumwell, and Phil has settled on a circular main area, built across three pasting tables. This enables it to be shrunk down and fitted into a car boot along with most of our crates of gear. Alas we will probably also now flow over onto the car back seat as well. That's the price of using 28mm figures. 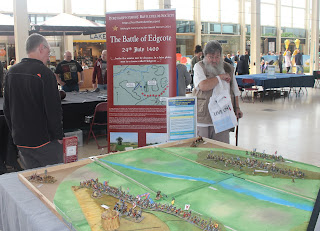 So far Phil has only got the rough painted circle of polystyrene. Due to time constraints my foam hills were pressed into service (they look a bit ragged as they're supposed to go under a cloth). The corner areas will represent off table locations, like Banbury & Northampton. In the background it's good to see someone actually reading all of the banner text. 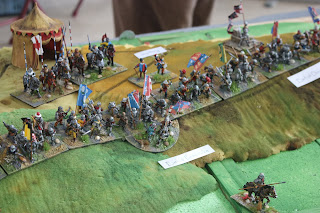 The figures are now pretty much all painted and properly based. Phil is still dry-brushing the bases in places. 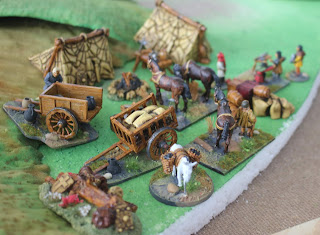 Of course we have some lovely camp vignettes to round out the whole thing. 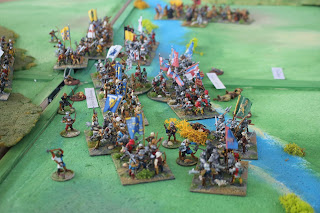 We did move the figures round, but we did a lot more talking to people than playing the game. 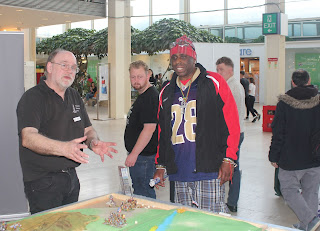 Here we see Phil in a classic "What's all this about" discussion. This bloke has come to MK with his chums to get some stuff. Had no idea we were there. Spent about half an hour with us. Knew nothing about wargaming, re-enactment or the Wars of the Roses. He now knows a bit about all three. Is he a convert? Probably not, but it isn't a closed book to him anymore.

In addition to our game we also had our regular show stand and stuff. 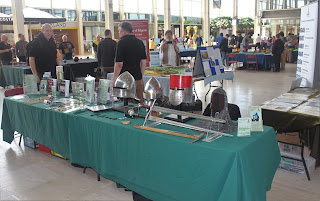 Here we are all ready for the off. We could probably have done with more space (and we did get an extra table on Sunday for our archery expert). We were busy most of the weekend. 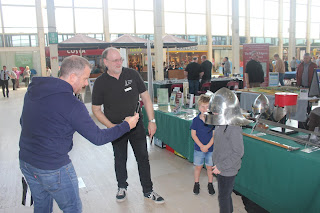 We got quite a few people putting the helmets on and we are able to tell the potted history of the development of armour with those 4 helmets. Then we have a few musket balls to explain how it all ended. 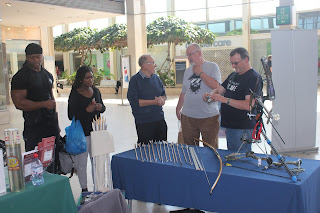 Here's Peter talking about arrows and bows. Again, a group of people who didn't know the show was on and stayed for quite a while. The guy on the left was a big guy, and his partner had a penchant for archery. 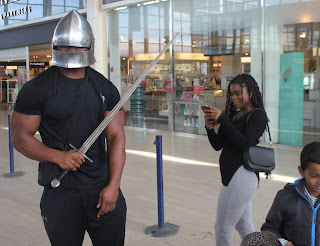 To be honest we don't often get people who really look like they could actually wear a suit of armour. I think he was quite taken by the idea of doing a bit of re-enactment.

We sold a few of our new book on Edgcote, and we handed out a lot of flyers for the Conference. They seemed to excite some interest. We can only hope it turns into ticket sales.

And then there were some games to look at: 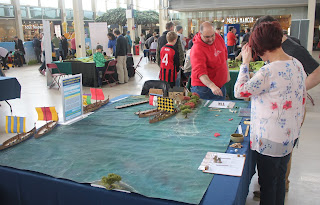 This was a "Saga at Sea" game. That's MNG irregular Graham S in red. He likes Saga, so he was well in there. 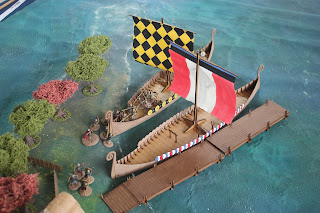 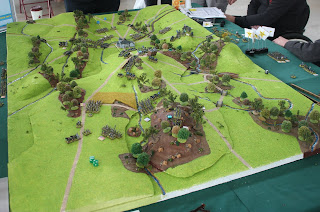 This was a 6mm Gettysberg, or similar. Might have been at Alumwell. 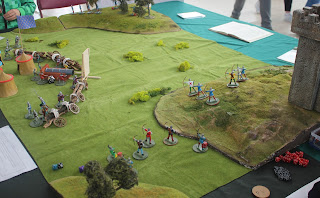 The Peterborough boys always have something interesting. This was a Don Featherstone "Skirmish Wargames" game. We've signed up for their show in September again. 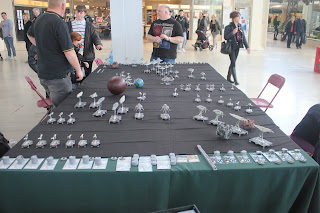 This was a very large Star Wars Armada game, although I think DS9 also turned up at some point. They had a lot of plastic on the table, so I don't think it was a game of manoeuvre. 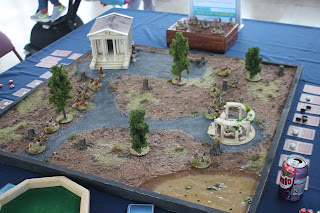 This was a Mortal Gods skirmish game. I only took a picture as my brother is quite keen on it. 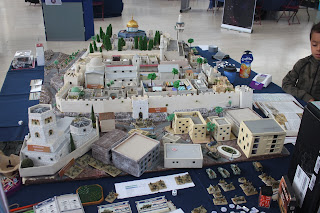 This was a game of the 1967 occupation of Jerusalem by the IDF. Nice model of the Dome of the Rock. 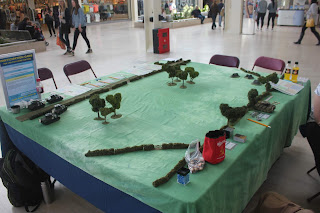 Tank hunting game called "Tiger, Tiger, Burning Bright". I think the aim is for the four Shermans on the left to knock out the one Tiger on the right, before they all get brewed up. 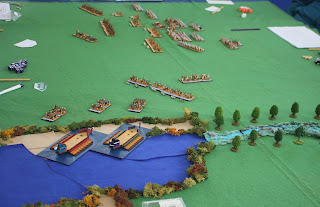 Finally we had a Dux Bellorum beach landing, which seemed to be going okay.

We had a good weekend and did our bit spreading the word for the hobby. Footfall in the Centre was a bit slow at first, compared with when we first did this all those years ago. Trade stands were down in numbers too. Dave L did a fine old trade with his books, and I bought a couple of board games. However I was unable to pick up the paint I wanted, nor were there any packets of 20mm figures to buy. Bit thin all round, and the show deserves better than that. They need to look at their publicity a bit more, really, for the hardened wargamer, but for us, for passing traffic, it is hard to beat.