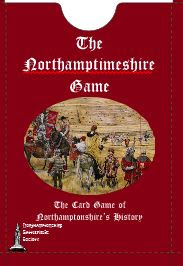 I designed a card game in my sleep, flying back from my last holiday. I put together the detail of it on my return, and produced a prototype. It actually played rather well, and the tests I did with people were universally successful.

The game itself was/is about the history of Northamptonshire. It has the dual goal of introducing people to Northamptonshire's very varied history, as well as being a "proper" game that a gamer wouldn't have a problem with playing.

I discussed it with other members of the Northamptonshire Battlefields Society Committee and we felt it was a product that would compliment our existing range of merchandise. Problem was, given the need for a decent sized print run to get the unit cost down, the Society couldn't fund the production. Well, it could, but even I, as the designer, wouldn't argue to tie up a large proportion of our disposable funds on a product that might not make its money back for 5 years, if at all.

Initial contacts with people working in the "heritage business" indicated that there might be, - or would be - interest from local heritage sites. Question was whether or not they would be interested in supporting the product. The feeling was that there would probably be an appetite and and funding available. The game, after all, could be tailored to include local heritage locations if needed. It would just be a case of substituting some of the events in the game for events linked to the sponsors, so to speak. This wouldn't be an unlimited opportunity as the locations and events would have to work within the game, and there are certain events that will remain in the deck regardless if it is to be published. I'd rather not see it published at all if it just ended up as a bland "Spires & Squires" deck. William Boteler is always going to be there, as are the Diggers of Wellingborough.

Anyway, through contacts we have we arranged a meeting with people who run a major bit of our county's heritage offering.

When I was working full time I didn't tend to see meetings and committees the same way as a lot of people do. They were not just ways of filling your day and avoiding work. The important thing about them is to understand their purpose and use them to fulfil that. This can be disseminating information or it can be a decision making or approval body. The important thing is to know what it is for and what is expected out of it.

Which brings me to the meeting today, and how I had taken my eye off the ball. I thought I was going to a meeting to demo the game and then talk about arranging the funding and distribution. Turns out I was more of attending a "Dragon's Den". And one where funding was really, really tight.

Now I don't have a problem with the latter idea. If I'd known that then I'd have done the appropriate work beforehand. Neither of the people we were pitching to play modern proprietary games, understand their popularity or get the pricing, and I hadn't done any prep work to explain. So I was left looking like I didn't know my subject, the size of market and so on. Plus, I see this as a way of getting people to learn more about our history from a fairly low cost impulse purchase, not as a way of generating income, and today's heritage is all about making money.

So the meeting didn't get where I wanted it to as the aims were not the same for everyone, and I feel that we may have blown that particular chance, - although I'm wondering if they could do what we wanted anyway.

All of which is a shame, because it feels like we cashed in some high value chips without understanding what we were getting in return. If I'd done that in a work environment I'd be bloody furious with myself, - or, indeed, if one of my staff had done that I'd be livid with them. And there it is, I've just made all the mistakes I was previously so careful to avoid.

So I'm not sure where we go from here. I don't think we can provide the hard marketing data they're going to need, - this was always likely to be an "act of faith" decision where you hazard a couple of grand from a marketing budget to try something different. That's not looking likely in the slightest.
Posted by Trebian at 17:58