The Jacobite variant of my Marlburian rules "Va t'en guerre" now has a name. As you can see from the heading they are called "Va t'en Ecosse" (A Level French really paying off there), and they will be going to COW in July.

There will be further changes to the simple tweaks I put in for the last game as I just can't leave things alone, but this Tuesday's game was another game to sound out the suitability of the core systems, and do a bit of calibration. And allow me to use my newly painted lowlander foot.

In the previous game the Rebels were counted as being higher quality, and they had more commanders of better quality too. I evened them up this time round to see what difference it would make. The Government forces were slightly stronger in terms of game points, but the measure is very crude. For this game we were joined by Dave, so with two a  side I was able to sit back and just umpire the game. 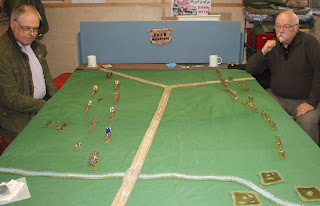 The Government forces are to the left, and are commanded by Richard and Steve. The Rebels to the right are in the capable hands of Dave and Tim. 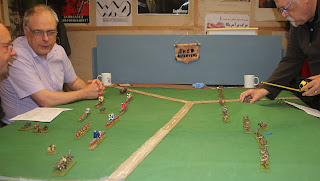 The Rebels won the initiative roll, and decided to move first. Following a brief discussion this might be made compulsory for the Rebels in an open field game, and I'll probably give them an in-built +1 to the roll, at least initially. 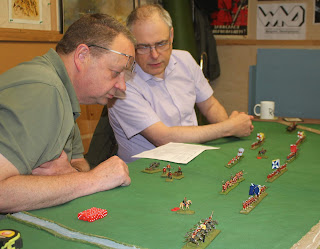 The Government generals confer. Steve, on their right, has a Scottish Brigade. This has a couple of regular army infantry battalions, and a Highland regiment, supported on the wing by some cavalry. Richard has the left wing, made up of English regiments. 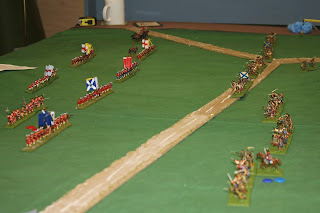 The Rebels continue to rush on, having being handed the initiative again. There is an issue with the game that generally speaking the Government forces have no incentive to advance. And so didn't. I may need to think about how far apart the armies are deployed to avoid boredom in the initial movement only rounds. 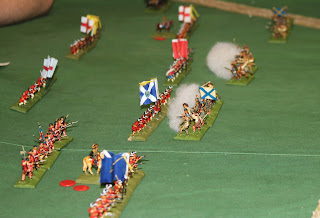 The central Highland regiments deliver their volley at the charge, then cast away their muskets and fall on with basket-hilted swords a-waving.  We resolve the melee furthest from the camera first. 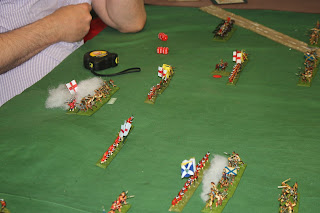 I got this wrong initially, as I forgot the first hit inflicts Disorder, but we were able to work back what had happened, and this resulted in the English battalion being broken and pursued through the gap in the reserve line. The Scotch battalion at the bottom of the picture is made of sterner stuff, being merely driven back in Disorder. 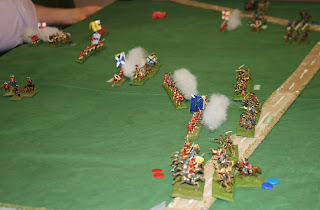 The Government forces now started to get a bit aggressive. They charged with the cavalry on both wings, and stepped their infantry forwards into range where possible, and delivered some disciplined volleys. Richard's cunning plan was to take advantage of moving second in the turn, and then hopefully win the initiative and fire again before the Highlanders could charge in. 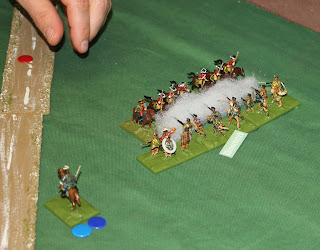 Out on the Rebel right the Highlanders stood to deliver a volley, but the Dragoons still charged home, led personally be Richard's General figure. 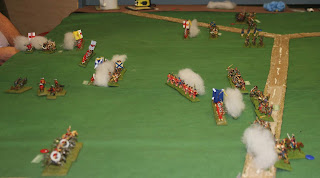 On Steve's flank, however, his cavalry received some damage and were bested in the ensuing melee.  Richard's plan, however, did succeed, and further fire was poured into the hapless Highlanders. 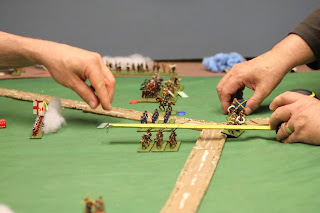 Over on Richard's flank one regiment of Highlanders never even got to grips and were blown away by sustained platoon fire. They flooded back to the rear, past the advancing columns of more conventionally armed troops. 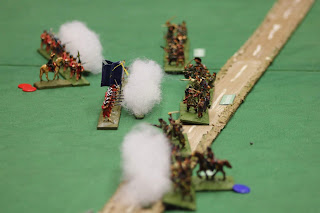 Now Disordered, the Highlanders in the centre readied themselves for a desperate charge. 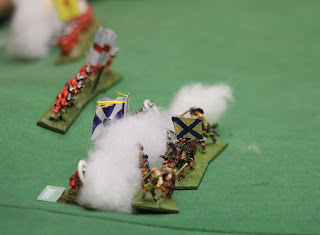 Elsewhere the regiment of Scots contacted six photos ago is hanging on, but steadily losing ground. 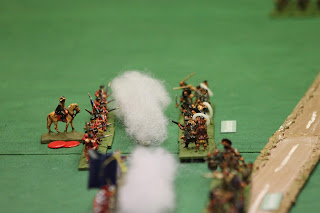 In the centre the Highlanders are kept at bay by deadly fire. 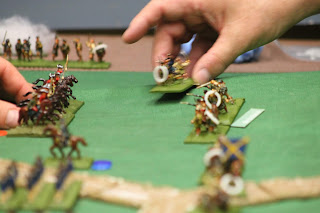 Richard's cavalry prevails in the melee, driving the Highlanders back. 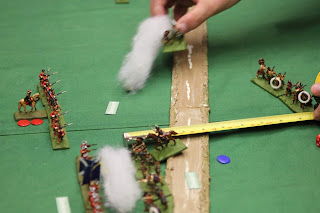 In the centre another unit is broken by fire, and leaves the table, trailing smoke (that stuff catches on everything). 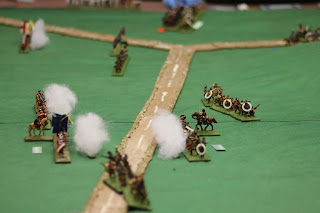 Their compatriots are also driven back, but managed not to break. 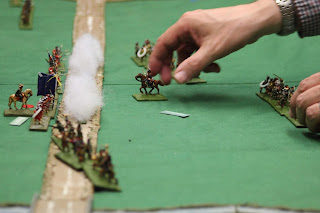 No! I spoke too soon. A couple of failed morale checks and off they go. 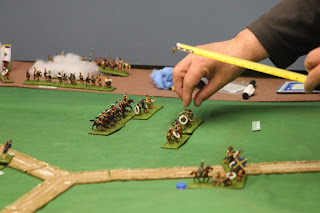 The left flank Dragoons drive their opponents back again. 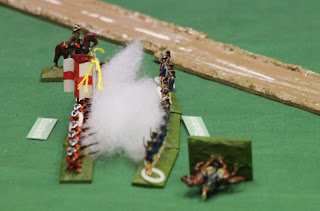 The Royal Ecossois deploy into line and engage in a fire fight, which they lose. Dave's General is shot and killed. 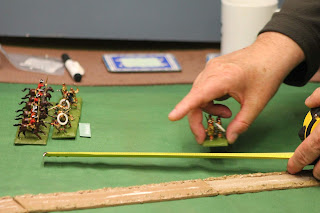 Dave's Highlanders are finally broken by the Dragoons. 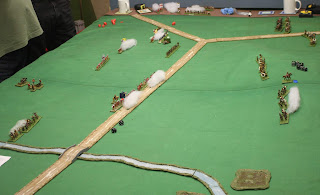 Elsewhere the centre of the Rebel army has collapsed, and the army breaks, having lost over a third of its strength points. The Government forces have taken some punishment, but they held on valiantly for the win.

So, a win to the Government forces. A more nip and tuck game, with the initiative roll being crucial at a couple of points. Not a lot of tactical finesse employed by either side, but then that isn't the nature of the beast.

The rules allowed for two completely different out comes on the flanks with exactly the same factors, which I think is good. Regular foot can hold their ground and keep the Highland charge at bay with well ordered fire, so that's good too.

I want to introduce an "intimidation" test, however, as the British did seem a bit blase about the screaming hordes rushing towards them, and I think that I need a separate Highland action phase, rather than combine it with the cavalry.

But it is looking right and feeling right, so still very positive.