Probably the most referenced artillery piece in the '45 campaign is the Coehorn Mortar. As far as I can see no one makes a 20mm soft plastic one, so I was going to have to scratch build.

Rod, who is the Bible for this sort of thing, drilled out some railway luggage trunks from an OO/HO accessories set. I don't have any of those.

Having routed through my bits and pieces boxes and stuff just lying around on and in my desk and on my storage shelves I found nothing suitable. In the end I decided to resort to Miliput. 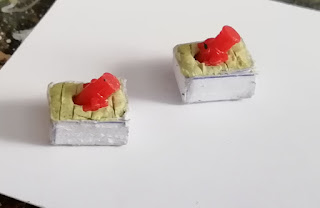 I wasn't too bad at making oblong blocks, but whenever I tried to put the barrels in (cut down from the IMEX AWI small howitzer) they went out of shape, and I couldn't get them back square. Very annoying. So I made up some open topped boxes from thin card (all those business cards I had left over when I lost my job still have a use) and crammed them full of Miliput, then stuck the barrels in. I was then able to level off the putty and make some lines like they're made from wooden boards. It wasn't until after they'd set that I realised I'd put one barrel in upside down. They look a bit scruffy, but I reckoned they'd paint up okay. 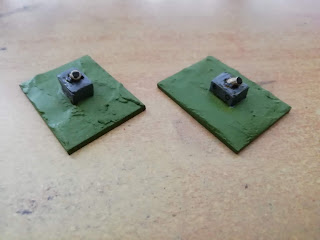 Here's the painted version, mounted on their bases. I added some painted detail on the sides and they look okay. A bit too deep, but that was the practicalities of what I could fold and glue with the cardboard and my none too nimble fingers. 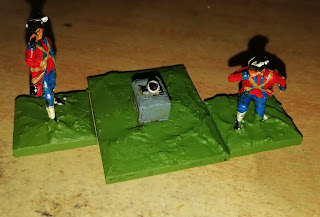 I've painted up two crew per mortar so far. I may need to re-think this as the rules have something in them about rolling the same number of dice as crew. The figures are IMEX again, but I think now I have got the Zvezda figures from yesterday I'll switch to them in future. 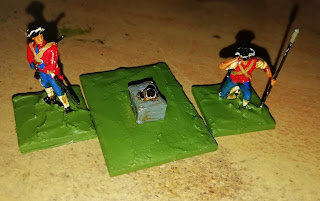 I relented on not using the figures with ramrods. We'll just see how they work out. If it snaps off, then so be it, and I'll just have to paint up a replacement figure, or maybe drill out the hand and replace it with a modified pin. 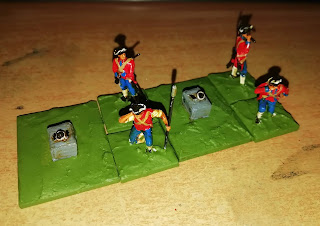 Here they are as a battery. I think they'll do, so I can knock up another pair now. And looking at the barrels I could probably improvise some of those from sprue off cuts.

Yes. Very pleased with that.