I thought it was a while since we'd run out my Greeks and Persians, so for a follow up Armati game after last week I thought it would be good to get them out. There's also a few freshly painted hoplite units that need to get on to the table. And when I checked it had been nearly 5 years since the last game of this type, so certainly about time to have another go. 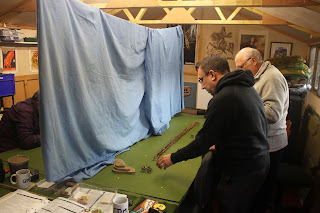 We had a good turn out. Tim & Dave took the Greeks, assisted by Will, making a welcome appearance after recent bouts of ill health. 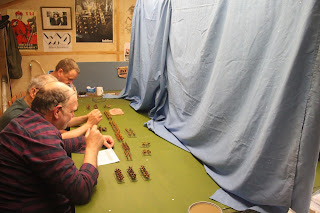 The Persians were run by Steve & Richard, aided by Phil. As you can see I erected a curtain to enable swift deployment without messing about with maps. Both the armies were quite large - 100 points in Armati terms, which is as big as you should really go on a standard sized table. 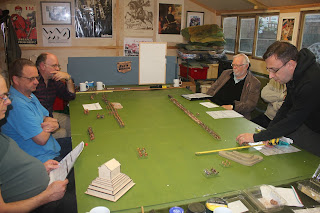 Under Phil's advice the Persians weighted their left wing heavily. They deployed their hoplite units in depth to add a bit of punch to the centre of their infantry line. The Greeks tried to cover their entire frontage to stop their flanks being turned.

Surprisingly the Greeks won the initiative roll and went first, but only by making a slight wheel of their infantry line. I felt this was a missed opportunity. I think the Greeks have to get on with it as their flanks are vulnerable due to the Persian preponderance in cavalry. You know you are probably going to lose the flanks, but you could win the game in the centre if you can get fighting there as soon as possible whilst delaying out wide.

Rather than anchor their flank on the steep hill on their left they decided to hold back on their right and trust Tim with taking the battle forwards on the left. 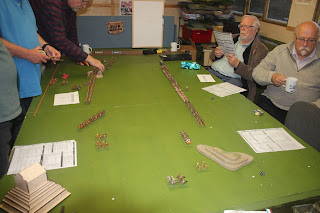 The Persians reacted by swinging their cavalry reserve out to cover the move. 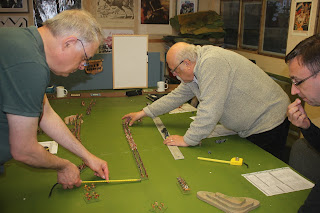 Having prevaricated in turn one the Greeks decided they needed to get stuck in. The Persian archers had already started to inflict hits out on the flank guards, and the Greeks couldn't afford to give any advantage away on either end. Dave resorted to using a straight edge to move his phalanx. Richard is checking how much wriggle room he has got to get past the end of the hoplites. 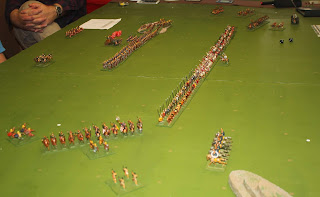 The massed Persian cavalry swing past the Greek infantry, setting themselves up to deal with the Greek flank guard cavalry. Tim has pushed his light horse off to the left, so Richard has diverted some skirmishers to keep them occupied. 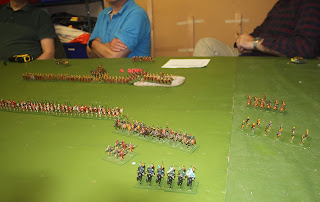 On the right the Greeks have held back their peltast light infantry (they had two units) but this has lead to one of them being killed by missiles. This might be a serious error, as dual light infantry units are a classic way of dealing with cavalry. 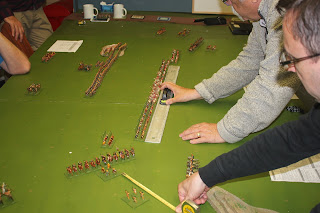 Dave continues to slide forwards. Tim is trying to work out how he can stay in range with his archers and not get run down by the cavalry. 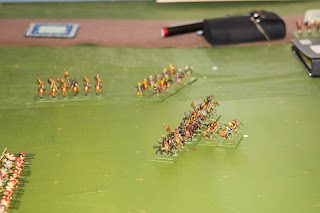 On the right the peltasts get stuck in. They need some luck. 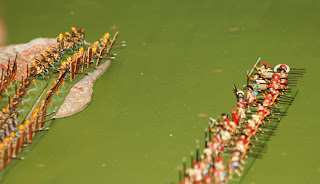 Over on the Greek right the Sparabara finally succeed in feathering the hoplites facing them. 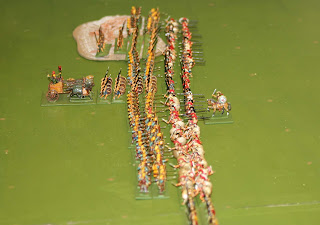 The Greek advance ends up with them falling about an inch short of the Persians. The dilly-dallying in turn one has caused this to happen. They should be stuck in and inflicting casualties by now. This will cost them. 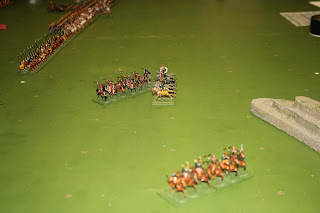 The cavalry on the Greek left finally engage. Tim managed to rally off his BP. Richard chose to split the Division and run down the archers. 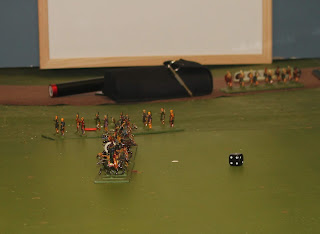 In the distance the peltasts inflicted a hit, but taking on two cavalry units was too much for them and they are removed. 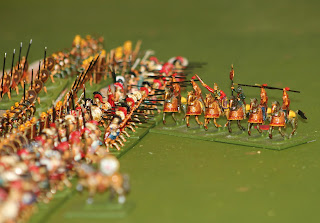 The speed of this collapse on the flanks and the delay in getting into contact means the Persians can do an emergency turn with a cavalry unit and hit the phalanx in the rear. This is not good for the Greeks. 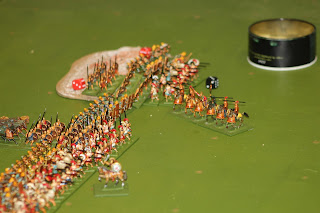 So the first round of infantry combat, instead of being the good news for the Greeks which it should have been, results in a victory for the Persians. Luckily (??) the unit that breaks them is not on the flank so there's no routed in to test to take. 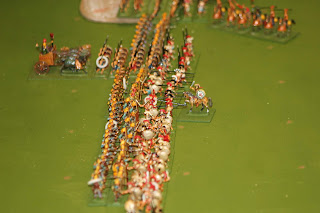 The Greek general gets stuck in, and critically allows his unit to inflict a hit. In the background you can see the Persian general sheltering behind his hoplites in deep formation. 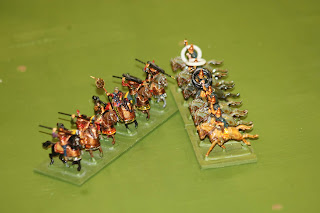 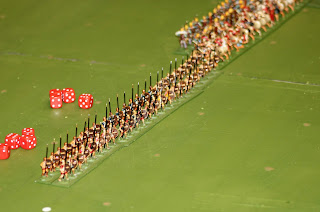 Dave about faces the end of his phalanx in preparation for losing the flank cavalry melees. 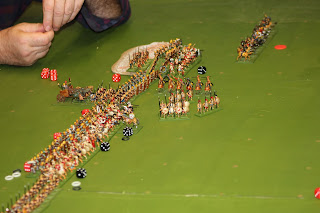 Next turn and the Greeks win the initiative, for all the good it does them. Well, it does mean they choose melee direction, so they avoid another routed in to test, but still lose another hoplite unit. 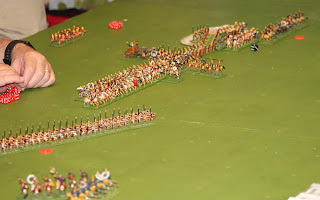 Dave starts to close down the space available to the Persian cavalry on the flank. 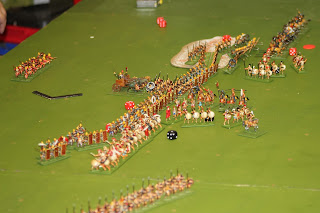 But those Persian cavalry in the centre just keep rolling on, and more hoplites break. 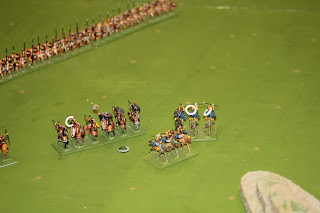 And whilst Tim does inflict a hit, he still loses his cavalry. The Greek army is well and truly broken.

An overwhelming victory for the Persians, despite not doing too much damage with their archery. However a couple of early errors made by the Greeks really played into the Persian hands, and it became difficult to see where they were going to get a win from.