We seems to know even less about Jacobite Artillery than we do the cavalry. We know most of it was nicked from the British after Prestonpans and not a lot else, except they did drag it around with them. Later on they got some French guns that were bigger and suitable for siege work.

From the books I have we certainly don't know what the crews looked like. Anyway, undaunted I decided to rely entirely on an on-line resource called Rod's Wargaming, which I've mentioned before and is awesome. He's been building the '45 units properly rather than just paint figures generically and call them things like the McFlurry's. He has a page on artillery that seems to cover most of what I needed, and even recommended some figures to convert, these being the IMEX American Revolution range. On reflection I should probably have hunted round for the Zvezda Russian & Swedish Great Northern War boxes as you get an extra gun and three limbers for £1 more and a bit more variety in terms of pieces (oh what the h*ll, - if I see some at a show I'll buy them anyway). On the other hand the reason Rod chose the IMEX guns, I think, is that they're generally quite small, being about 3 pounders in the American box, and what looks like a Coehorn mortar barrel in the British box, which fits the guns that were used.

So, Rod reckons the gunners just wear berets and are in trews with short jackets and a bit of plaid. I sort of went with that, but converted a couple of figures in turn back coats to simple long coats.

The IMEX figures have very fine detail compared with everything else I'm using, and are a bit taller too. The gun is also a finely detailed model next to my old Airfix kit. Oh well. 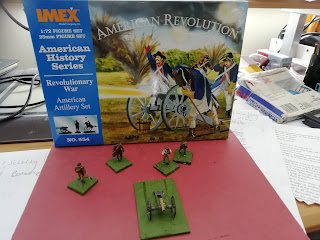 The guns come with 6 gunners a piece, including some multi-part chaps with ram rods. I only need four per gun with the rules system as written, so I'm over supplied. I've left out the rammer figures as they look a bit fragile and the plastic is quite stiff, so prone to breaking, I reckon. 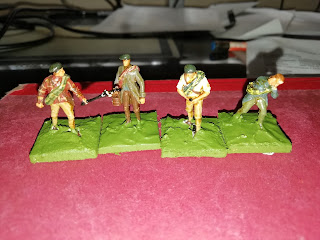 Rod modified his figures with his soldering iron and a head swap or two. I just went for a knife to carve off the detail and some Miliput to add the berets and plaids. As you can see they are a bit skinny. 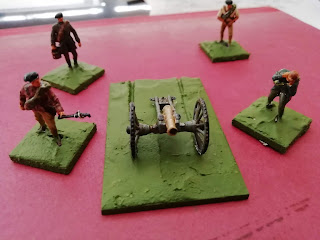 Here's a close up of the gun and its crew. Looks okay, I reckon.

Right, need to get on with the others and work out how to make bases for the Coehorns.
Posted by Trebian at 17:38