Some of the Monday Night Group have never played any of my Taiping Era games, so it seemed about time to give it a go. I set up a Taiping attack on a town and their idolatrous temple buildings. These were being defended by Manchu forces under regular Imperial commanders.

I had a couple of players, - Richard took the Taipings and Steve got the Imps. I decided to experiment again with only using my camera phone, so I apologise in advance for the quality of the pictures. 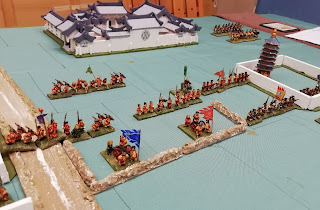 Here's the centre of the Imp defences. Guns backed by some infantry, flanked by the walled Pagoda complexes. 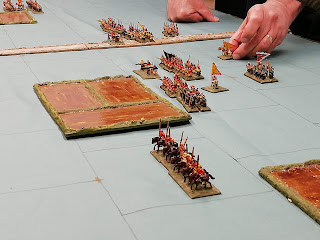 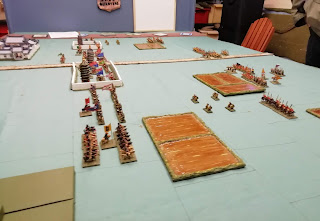 The Imps responded by sending forwards their Tiger Men to scare the horses. 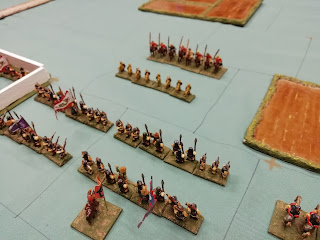 This didn't work out to well, and they were forced to retire. 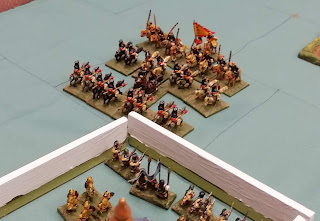 Over on the other flank the Taiping cavalry charged the Manchu horse, although one of the Taiping units refused to move, having failed to pass its Moral Vigour test. 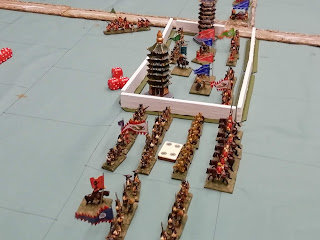 The Tiger Men are driven back onto their infantry supports 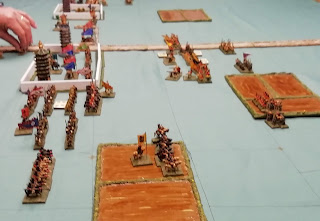 Steve started to develop his right wing by pushing his cavalry forwards. 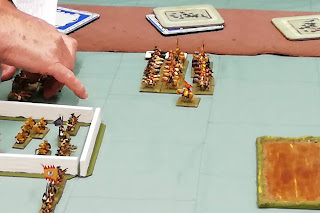 On the Imp left the Longhairs start to prevail, and their second cavalry unit decide to join in. 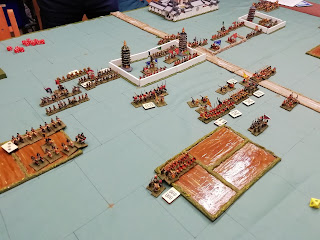 As the Taiping centre press forwards the defending Imps open fire with everything they've got and inflict some damage. The Taiping cavalry that charged the infantry have been driven back a square, but the Imp cavalry on the left of the picture have been badly shaken by Taiping musketry. 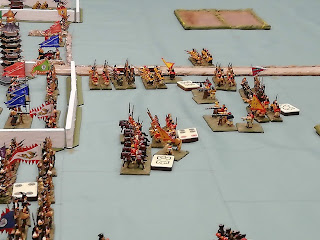 Up by the road the Taipings mass infantry for an assault on the large compound. 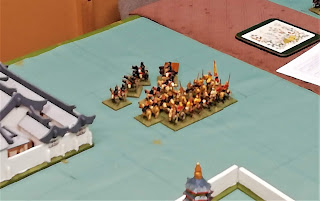 The Taipings continue to prevail in the cavalry fight over on their right. 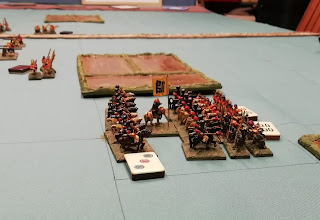 The Manchu cavalry launches itself at some Taiping infantry. 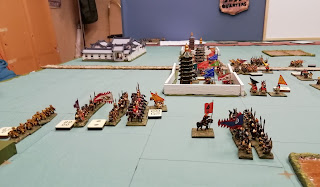 The Taiping cavalry in the centre charge again, and drive the infantry back. In the background the infantry assault the Pagoda compound. 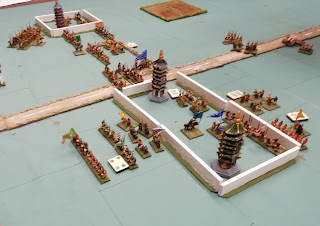 The Imps are ejected from the compound, and are pursued by one of the attacking units. The other starts to loot and desecrate the temple. 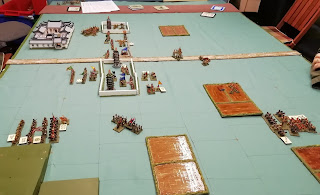 The Taiping cavalry have punched a hole on the flank near the camera, but elsewhere devastating fire from the Imp artillery has caused some Taiping infantry units to flee. Behind the building in the distance the Imp cavalry has been driven off, and the Taiping horse as returned to trouble the Imp rear. 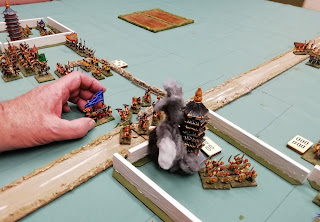 As the Pagoda starts to blaze, the Imp infantry wheels round to capture it back. 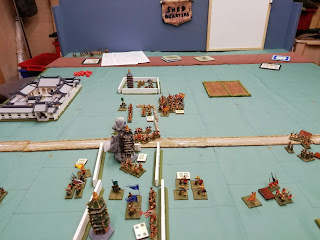 More Taiping infantry start to retire, but the cavalry has driven the Imp foot out of their position. 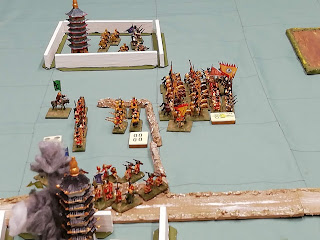 Next turn the cavalry break those infantry, but too late.

Most of the Taiping forces are now in retreat, so the Imps claim a victory.

Both of the players took to the game quite well, despite the rather odd way it works, and had a good time. Richard was very good natured over his defeat after I did stack the scenario against him. The Imps are weaker, but I over compensated for this by giving them more troops and putting them behind walls mostly.

The surprise was how well the cavalry performed on both sides, which is unusual for this system.