Would you Adam and Believe It?*

I was remarking yesterday how I wished I'd gone for the Great Northern War artillery sets from Zvezda, instead of the American Revolution chaps from IMEX, and what should I find in my local model shop? 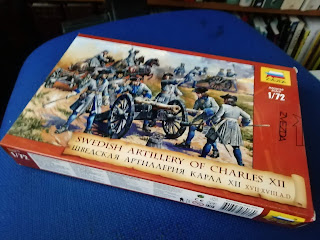 I only went in for some paint, (and I only went out for that as I had to pick up some Edgcote Conference leaflets from the conference venue as well, which is just up the road). I'll swear they didn't have them last time I went in, and the figures aren't exactly recently released. And they work out cheaper than ordering from Hannants once you include postage. And I'm supporting my local model shop too. So, good for the high street too.

I umm'd and ah'd for must have been nearly 15 seconds before buying them. After all I don't really need them. 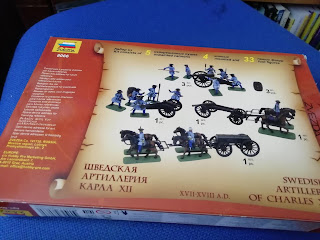 And then I looked at the back and thought that I could use the ammunition wagon for transporting my Coehorn mortars when they are finished. And British uniforms for artillery changed from red to blue between the WSS and the '45, so I need extra crew so I can duplicate them to be appropriate.

Well, that's what I told myself anyway.

And if you were to think that the detail on the IMEX figures was good, the Zvezda chaps are in a class of their own.

* I had a colleague once who wasn't very good at the Cockney Rhyming slang thing. This was one of his better attempts.
Posted by Trebian at 17:08