A Visit to the Big City

So, not being able to get tickets to Glasto again I headed to London on Sunday to play a game face to face with the guys I've done the multi-centre Skype games with.

It's something I always keep meaning to do but I don't really like driving into London and I don't have a railway season ticket anymore. However this month was a game about the crisis of 1469, called "Shameless and Impudent Lords" so I couldn't really skip out of that, could I?

The game was a Diplomacy type of game crossed with a bit of Kingmaker, and we had about a dozen players involved. I was intrigued to see how Nick the designer had dealt with the issues around doing a game of this period, as it has exercised me for the last year or so and I haven't really worked out how to do it yet.

My drive into the City - the game was played in the Holborn area - was uneventful, and accompanied on the way down by Bairstow & Roy tonking the Indians to all parts of the ground via TMS*, so I was in a good mood at the start at least. The designer had read a copy of my Edgcote book, and we'd exchanged a few emails on how things might work. I was very conscious I didn't want to hang over the game with an air of "I know all about this", and he gave me a pretty good role to make this work for me. I was John Neville, Earl of Northumberland and Warden of the East March. I think history tells us that he wasn't on the inside of his elder brother's councils, so I prepared myself to act surprised when stuff started to happen, and not to encourage rebellion. I was intending to council against it, then quickly rally to the Neville banner when drawn into the innermost workings of my brother's plan 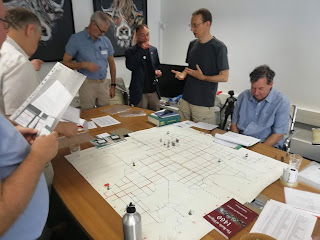 The briefings begin. Nick is explaining how it all works. The chap sitting down is Martin, who did all the game admin. Sterling piece of work all round. You'll note a copy of the best book on the 1469 campaign clearly visible on the table, placed there by the game designer, not me.

Anyway, I'm in charge in the North, so that's my figure on the left, with a stack of red retinue counters.  The nearest figure to me is some chap called "Robin", and he's in York. The figure near the book is Worcester, IIRC, and he's in Ireland, being the Lord Lieutenant.

Everyone else is in the South, or East, it would appear. King Edward is on a Pilgrimage.

Luckily for game design purposes we were all allowed to talk with everyone, regardless of where we were located, which was a relief, as otherwise it would have been a lonely old game for me, marooned in the North. Admittedly with turns lasting a week, and characters being in places such as Ireland and France, this rather stretches credulity. Especially as people off-shore can talk to who ever they like, but can't then get their ships out of port. Well, this is "the real Game of Thrones" so perhaps everyone was sending ravens. 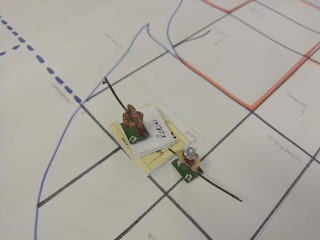 The news quickly emerged that Robin had some people with him who were more than just raggedy peasants. I immediately geared up, collected forces from some of my estates and half the local levy and headed to York to deal with the problem. As that's, like, my job. I was astonished when pretty much everyone else in the Kingdom immediately called out every single person they could to deal with the threat. Which I took as a personal slight. Perfectly capable of dealing with issues in my own backyard. And did I mention that it was, like, my job, too? 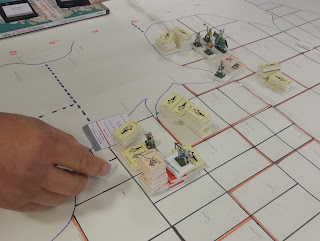 At this point I was just outside York, but other, leaderless, levy were also on their way. A loop hole in the rules meant you could order a muster without a Lord being present. The Rebels also now released the manifesto echoing my brother of Warwick's concerns. I asked him whether it was still okay for me to duff up the rebels and stick Robin's head on a spike. He didn't demur. I think that was an error. 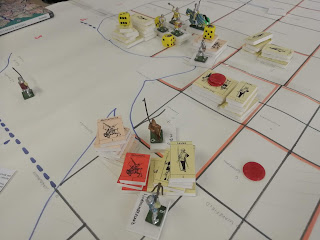 Long story short, Robin sees off the levy sent to intercept him, then bumps into me, loses the battle and ends up dead. I am rewarded by Edward IV with a castle at Clitheroe. Which is nice.

Margaret of Anjou was sticking her nose in now, and it was clear that Nick had decided to crash the 1469 & 1471 crises together, as rumours of the return of Jasper Tudor started to abound. 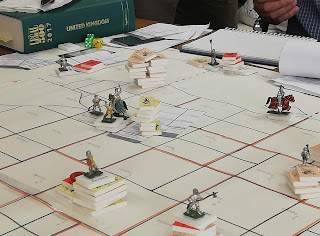 There's some dithering in the centre of England. Clarence has married Isabel. Warwick has raised everything he can and landed in Kent. That's his big stack of pink counters in the background. Exeter is somewhere in the West Country. Henry VI is dead, and is on his way to being beatified. Lord Rivers is bumbling around with an army and no clear plan.

I've gone back to Berwick to deal with any threat from Scotland, and disband any parts of my army I don't need. I will, in due course, be forced to raise the Northern shires again, cross the border, and loot and set fire to stuff in retaliation for a raid by the Scots. 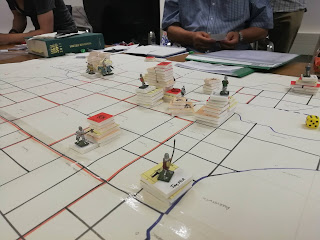 The climactic clash is about to occur in Wales. Jasper Tudor has been cornered north of Aberyswyth, near Porthmadoc. Butcher Worcester with lots of chaps is heading his way. Tudor loses the resultant battle, but escapes with his life in a rowing boat.

Meanwhile in the West Country Exeter has been backed down into the toe end of Cornwall, but then comes out fighting, defeating Humphrey Stafford, who dies in the battle.

The Lancastrians then pretty much had to withdraw, and we ended with Edward still on the throne, all of the Rivers' family still attached to their heads and the Nevilles not in open rebellion. Remarkable.

It was an interesting romp through the politics and problems of the period. There were already suggestions for improvements as we were packing up, and no doubt there were more in the pub afterwards (I had a two hour drive home so I didn't really want to spend an hour in the pub drinking lemonade so I missed it). There has also been a lively discussion on the email group for the players.

Without a doubt the game had more hits than misses in it, but I, for one, felt that it was too easy to raise armies and keep them together. And also too easy to talk to people where ever they were. Having said that there were a lot of players and a lot of moving parts, so there has to be a compromise or two in the overall design to get anything like a result in the 3 1/2 hours we were playing.

* For my overseas readers this is a cricket reference.

Email ThisBlogThis!Share to TwitterShare to FacebookShare to Pinterest
Labels: Edgcote, wargaming, Wars of the Roses