So it occurred to me that over the last year or so the Shedquarters MNG has grown in number, and that in all probability none of our new players had played the original "AK47 Republic".

Clearly an omission to be rectified.

I worked out a couple of armies, - Colonials as defenders, and People's Popular Front as attackers. Phil & Richard had played before, so I split them, with Phil defending, then had Dave & Tim with Richard and Steve with Phil. 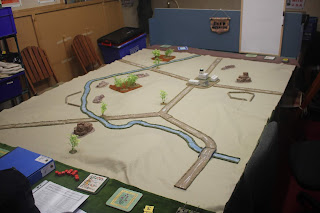 The terrain is larger than for the "classic" games back in the day when I ran an AK47 convention. The board is about 6' x 5', which I think was the original recommended size. It was the size we played originally until I started the convention, when I shrunk the tables to 4' x 4' to fit the hall size and to ensure we got the games fitted in to the allotted time and space. My, those games were fast and furious. 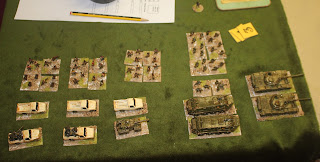 This is the PPF before the political flowchart... 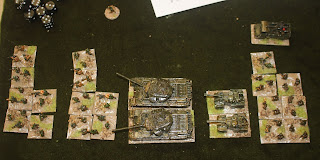 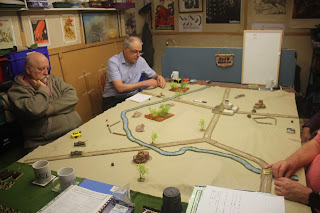 After putting out the objectives the players swapped sides of the table. The attackers got two units on, - some tanks and some militia infantry - as did the defenders. They got a unit of professional infantry (placed in the town), and two armoured cars. 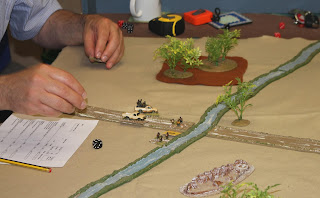 Richard's militia infantry seized the river crossing, amid much jubilation. 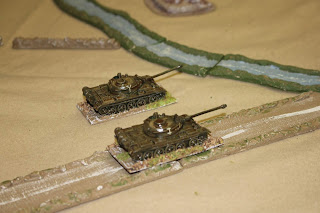 Tim had the tanks, and started a long, slow, drive across the table. 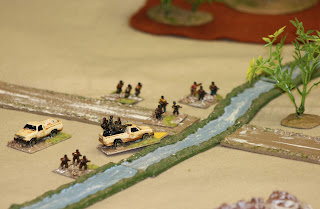 The militia at the crossing spread out and made themselves at home. 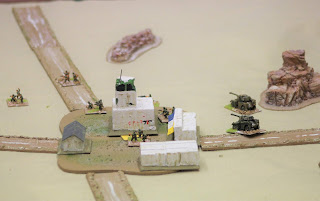 Phil decided to punish their impudence by moving his infantry out of the town. His plan, as they are professionals, is to do a lot of firing and get those airstrikes from the random events rules. 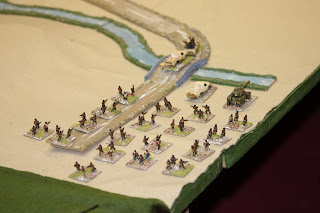 As part of their political flowchart the attackers got the 100 point militia power up. They also rolled well on the reinforcements, and got two units on in successive turns in the far corner... 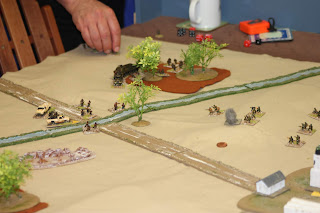 ... and their regulars in APCs as well, in the other corner, near the river ford. The defenders were not so lucky, and were facing 5 units with only two. Phil's aggressive approach (was there ever any other) was taking fire, but he was closing the range. 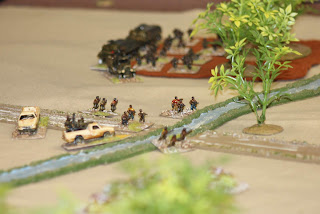 As the regulars de-bussed into the wood, it was revealed that their C-in-C was with them. This proved to be a vital move. 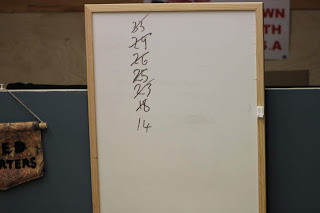 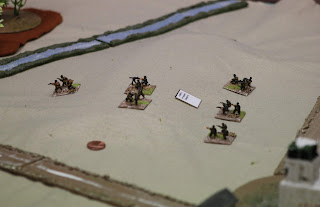 Then Phil got his airstrike marker, having shot a man at the river crossing. 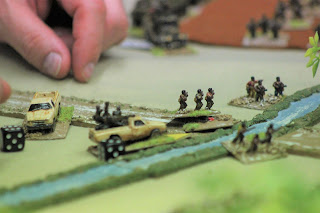 Richard moved his men up to reinforce the defences. 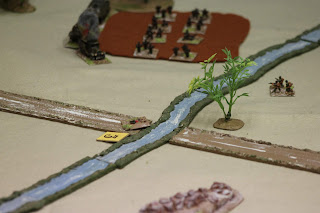 The airstrikes came in, brewing up the truck in the background with the RCL, and destroying a militia vehicle too. The militia at the crossing promptly turned and fled. That's why they aren't on the table any more. 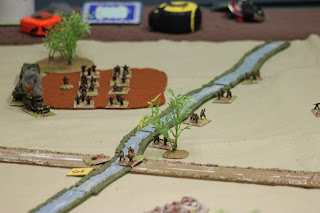 The meant Phil could seize the crossing. 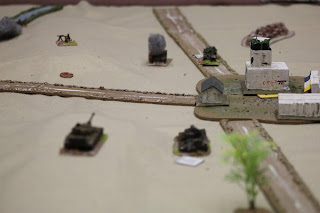 The tanks and armoured cars faced up to each other, and exchanged kills. 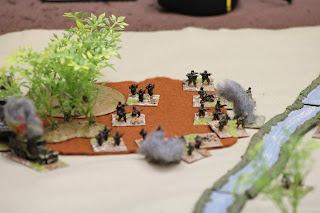 Deciding to ride his luck, Phil close assaulted the wood. He got the better of the exchange, but the presence of the attacking general meant their opponents held on, passing most of the morale checks. 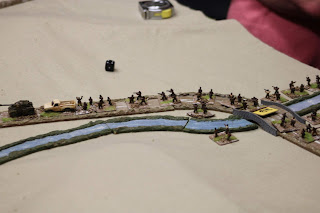 Tim started the long slow walk from the corner to the main town, by way of the third objective. 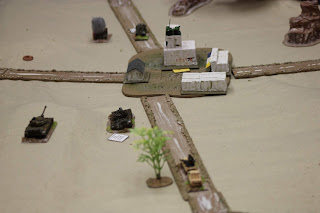 The armoured vehicles continue to fire at each other, as the smaller of the two militia units heads hell for leather to occupy the town. 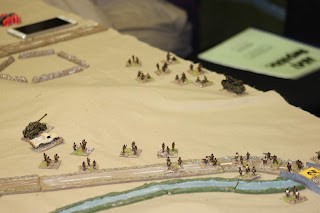 Finally the defenders get some reinforcements on, which gives Tim pause for thought. Is it too little, too late? 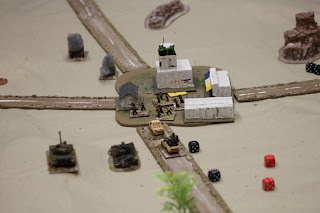 Well, yes, it was. Steve lost his last armoured car, so he was no longer disputing the central objective, which Tim then occupied with his militia. The defending reinforcements got a shot or two at the big militia unit, but not enough to cause it any problems. Phil's professional infantry had by now taken a hit too many, and failed their final morale test, and so retired from the last objective, although Richard was unable to get there and claim it.

Then the defenders rolled a 5 for the countdown and it was game over.

The attackers ran out substantial winners, 72 points to 26. They really had the rub of the green, in both the political charts and in reinforcements. Phil & Steve hung in there with two units versus five for a lot of the game, and could almost have sneaked a win, if they had not lost the last armoured car.

So, a two player game kept six of us occupied and entertained for 3 1/2 hours. AK 47 Republic worked its magic on the newbies who were all enthusiastic about playing again.

Truly a classic set of rules.