Supposedly the largest battle of the '45 rebellion, The Battle of Falkirk was fought in January, late in the day and in foul weather. Possibly the great missed opportunity for the Jacobites it presents the game designer and rule writer with a number of problems. It really does need scenario specific rules, so that's why it hasn't featured until now.

As "Va t'en Ecosse" has been to CoW this phase of its development cycle is about complete, bar finishing the couple of regiments sitting on my painting desk. I need to turn to something else for a while, but what better way to round off than with Falkirk, 17th January 1746, and a load of scenario specific rules made up on the spot. More or less. 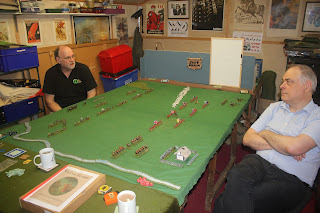 Falkirk takes place on a plateau, which mostly slopes down towards the British rear and left. The British are initially encamped off to their right, and march to the field in order to give battle. Their artillery becomes bogged down and never makes it. Their right wing is partially protected by an impassable ravine, which is represented by the grey area centre top. The battle starts at 4pm, just as the sun is going down, in the pouring rain which the prevailing wind is driving into the face of the British Army.

For the game Phil took the Jacobites, and Richard the British, assisted by Tim who was given the cavalry. 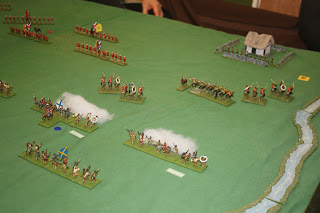 The game moved on so quickly I seem to have forgotten to photograph loads of it. On their right the Highlanders advanced, then the British cavalry charged them. The Highlanders stood and delivered a volley (first scenario rule introduced, number of dice rolled reduced by a random amount), and inflicted Disorder and some damage. The Dragoons still charged home, but were outclassed by the Highlanders, and were forced to retire with extreme haste. Unlike their historical predecessors I didn't make them flee between the two armies and get shot up. 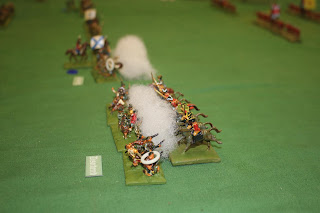 Having softened them up with his first two Cavalry units, Tim threw in his reserve line. 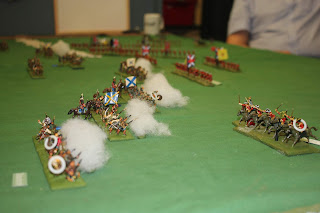 The reserves fared better, but were still repulsed. 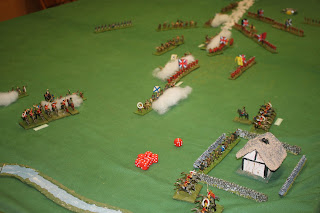 The fleeing cavalry had opened up the British left, and Phil pushed his clans into the open space. Elsewhere the regulars tried to hold off the Highland charges with firepower, but this was proving less effective than usual. Out on their right, the British were starting to turn their infantry inwards to cover what might be a breakthrough in the centre, but this exposed them to musket fire from the Highlanders. 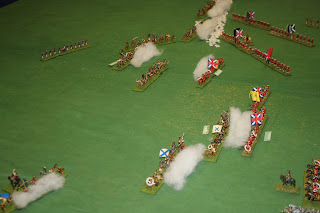 The British left of centre infantry recoiled from the charge. The right centre recovered from being intimidated and repulsed their attackers. 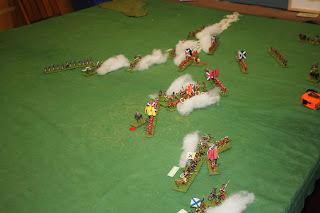 The second wave of Highlanders charged in and broke through in the right centre. The British left has now almost completely gone, apart from some militia hiding in the buildings. Richard is still trying to pull his artillery into position. They only move 1d6 inches per turn, due to the muddy ground. 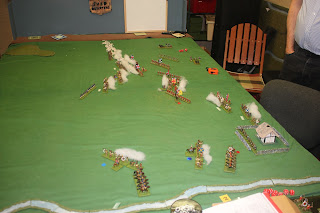 Phil has finally got his cavalry into position on the right, only to discover that the ground is too marshy for him to charge. He was not amused. Out on his left he has edged a unit round so he can hit the British regiment not fully covered by the ravine. 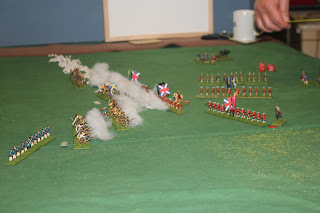 General Cholomondley is bringing up his infantry to stop his position being turned by the collapse of the centre. He has even deployed his guns. 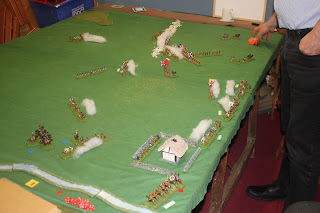 The Highlanders charge over on their left, but are held. Elsewhere the British Army is in full retreat, and it's a Jacobite victory.

So, very close to a historical outcome. The game is stacked in favour of the Jacobites. They have a higher value army using the crude points system I've put in, and they were generally classed as better quality troops for the entire game. The die roll to reduce firing dice hampers the British more than the Jacobites as that's their main way of dealing with their opponents.

So, a satisfactory conclusion to this part of the "Va t'en Ecosse" journey. One of the players asked about Killiecrankie. I do have rules for plug bayonets in VTG, and I think I might be able to improvise pike elements too....hmmmmmm.