Yes, July has rolled round again, and the annual WD Conference of Wargamers is once again convened at Knuston Hall in Northamptonshire.

As you can't have too much of a good thing we started early with a meet up of about a dozen delegates in a pub in Northampton. This was so we could do a walking tour of medieval Northampton, including the location of the 1264 battle, with local guide & Northampton history guru, Mike Ingram. We spent a fascinating two hours strolling around the main and back streets of the town, in very pleasant sunshine. Being a local, of course, I'd never bothered doing this before, and also didn't take my camera with me.

So, it was then time to buckle up and drive to Knuston, in time for a swift pint before dinner.

Dinner was followed by an ambitious Plenary Game, on the subject of the Yom Kippur War. This featured a named role for every one of of the 40 delegates, some in teams and some just individuals. The game was supported by a WhatsApp group to spread news and allow general announcements. As the designer, Ian Drury, remarked, he'd run a Yom Kippur game in 3 hours with 20 players, so no doubt running it with 40 would enable it to be done in an hour and a half. 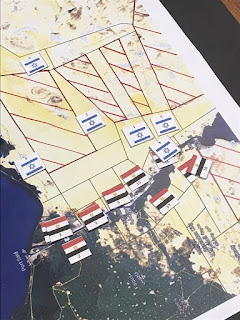 Despite everyone's best intentions (?) war soon broke out, and some players got to push counters across maps.


I was Kurt Waldheim, and my role was to try and get people to make statements at the UN, and then try and convince people to use the UN to broker a ceasefire and put in UN Peace Keepers.

I did succeed in organising one session of the Security Council, and got speeches out of the US President and the UK Prime Minister. The Soviets refused to play ball and sent their most junior person to just say no to everything. A nice turn round from the usual situation, that handed the USA a propaganda coup.

In fact I had been completely sidelined. In a brilliant performance Rob Cooper as Henry Kissinger shuttled around everyone, separated the Egyptians from the Syrians and brokered a ceasefire in Sinai which was to be enforced by a Saudi peace keeping force (yes, really). No UN involvement at all. He then announced it to the World at a summit in Cyprus, having summoned me there to provide a fig leaf of UN legitimacy. I refused to sanction the deal, and let it be known that it was not supported by the UN. Hah. Lot of good that did me.

It all went surprisingly well. There were a couple of design issues identified (the internal tensions in the Kremlin meant the Soviets rarely came out of the Library, for example). I was up against Rob Cooper again, as indicated above, and as per usual he had me on toast.

After that we went into proper ADGs. I ran Martin Wallace's trial "CAN System" game "First Adventure". This is an entirely card based one-shot dungeon crawl for four players and a GM. I'd been a player before, so I GM'd. The players were WD stalwarts, including Geordie from the Exiled FOG blog.

They did solve the problem, but only one got out alive. There was lots of argument, a fair amount of cowardice and some bravery, probably in equal measure. Much as everyone enjoyed it, no one could really see why you'd buy such a one-shot game, even though they are currently popular. I deployed Martin's arguments, such as I could remember them, but I'm not convinced either, and the group remained unconvinced. Anyway, I passed it on to Jerry, with the injunction to send Martin some feedback, play it, then pass it on again.

By now it was nearly 1am, so my master plan of setting up my game for the morning then having a lie in was well and truly busted.