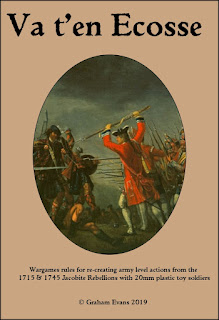 My big set piece for this year's COW was a refight, near enough, of Culloden using my "Va t'en Ecosse" rules, which I have been working on over the last few months.

I seemed to have enough time this year to put a cover on what is otherwise a Word document. I have chosen the least original picture of the battle that is known to mankind. And is also out of copyright.

I was up early to get the tables up and the toys out before breakfast. Can't stand coming to a session where the organiser is still ferociously searching through boxes and fussing with the table layout. Also takes the pressure off me at the start to know I've got everything where I want it, and ensures I've got enough tables for what is quite a big game. 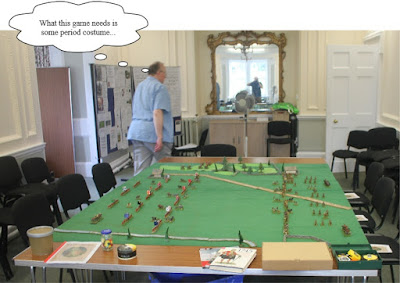 The British Army is to the left (I put "Hanoverians" on the sign up sheet, and a player crossed it out and wrote "British Army" in its place. Quite right too). The Jacobites are to the right. 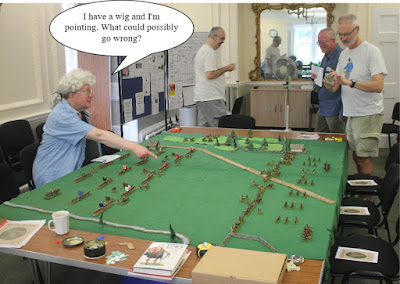 The players started to gather. John got there first. Luckily none of the others were scared off by the furry creature sitting on his head. 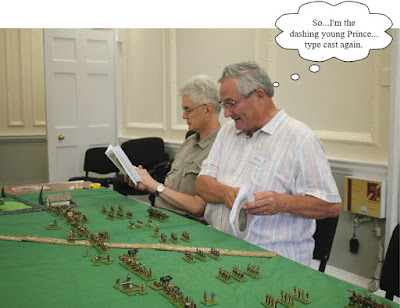 The Jacobites were soon taking advantage of the copies of the rules left for them. Nigel decided to take the right wing, with the big Highlander attack columns. Jim, modestly, decided he was ideally suited for the role of the Bonny Prince. Which is sort of fair as he was the only Scot present. Shame that Charlie preferred to speak Italian, really. 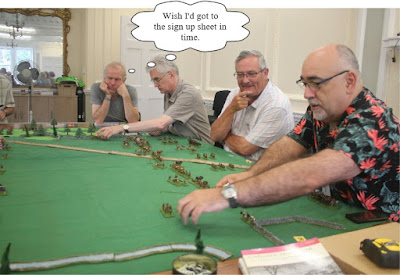 The Jacobite team was completed by Rob, who misheard the instruction to wear a Highland shirt as "Wear a Hawaiian shirt". They fired their guns then set off at the British, although Prince Jim held back in the centre. I think he wanted a staggered attack all along the line, but Rob was having none of it. As the first full-fat toy soldier game he'd played in 20 years, he was going to move toys and get stuck in. 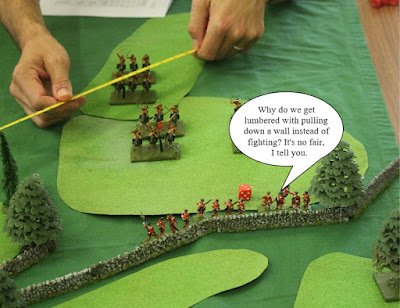 Meanwhile the British hold their position, whilst sending forwards their Highland battalion to break down the enclosure walls to allow the Dragoons to pass through to the Jacobite rear. 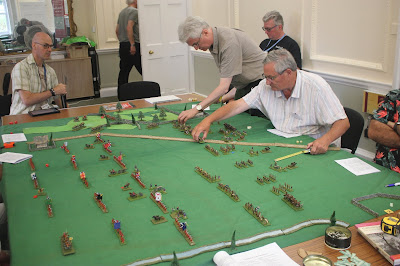 The Prince decides to join in on the full frontal advance precipitated by Rob on the left. 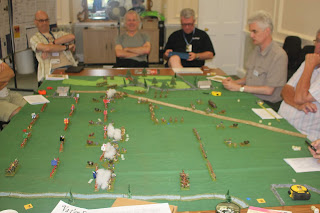 The front lines engage. Alas for reasons I can't explain this picture is a bit blurry. The audience is mostly leaning back and going "Woah! That looks spicy". Tim finds something more interesting on his tablet. Knuston has good wi-fi. 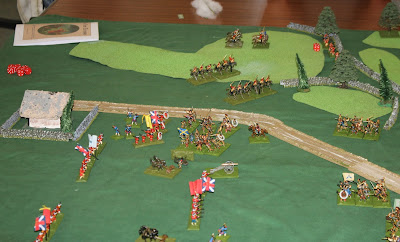 The first Highland rush smashes into the British left and breaks their opponents, sweeping away the gun crew as well. However Ian has very cleverly bluffed his opponent by taking down the park wall and then switching his cavalry to attack the inner flank (for those of you who are not aware the two players facing off at that end of the table are brothers. So, no needle there or bragging rights on the drive home up for grabs.). 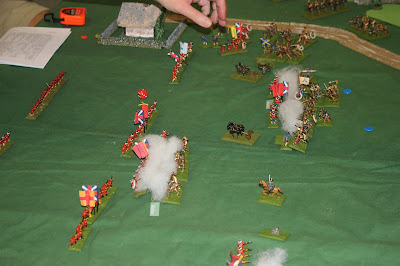 The Highlanders also drive back the centre of the British line, but it isn't a success all along the line, and some of their clans are halted in their tracks. 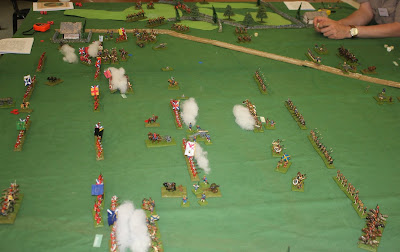 It's all in the balance. Near the camera on the Highland left Rob's Highlanders intimidate their opponents and drive them back. Elsewhere in the centre the steady musket fire halts and breaks the Highlanders, who flee back behind their second line. Fortunately for them the Lowlanders have been deployed in line against just such an eventuality. The British left continues to reel backwards, but the cavalry has now deployed into line to provide much needed support to the hard pressed infantry. 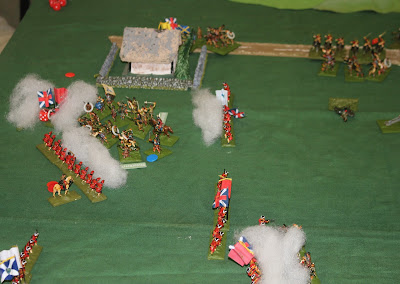 The Highland success has pushed them into a "kettle" enabling the British to turn and fire into them as they pursue. It is a feature of the rules that you can fire into a melee from the flank and rear. This firing damaged the Highlanders, but didn't break them. 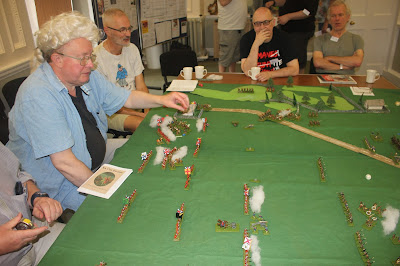 The British right has held up well, but on the centre left the Highlanders have driven well into the second and third lines of the British position. The cavalry out on the left have contacted the Highland reserves and prevented them following up the breakthrough. Not pushing the Dragoons through the enclosures is proving to be a good choice. 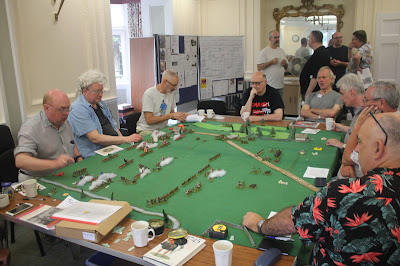 The wider angle shot shows that David's right hand unit is still falling back. Rob is using his cavalry to launch a series of charges on the British infantry to hold them in position whilst he repairs his line and tries to rally his Highlanders. 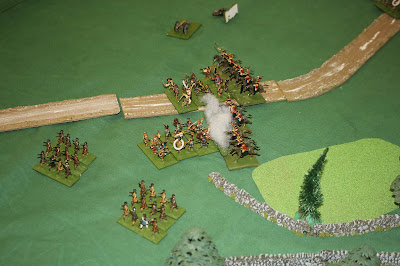 The British cavalry close with the Highland attack columns. The melee is hard fought. 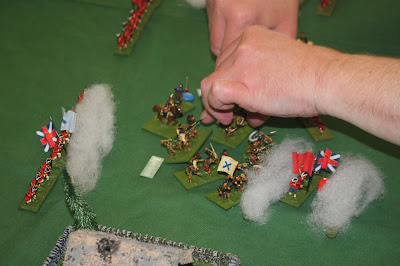 More volleys into the pursuing Highlanders on the British left start to cause great execution. 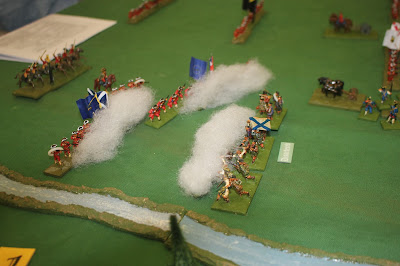 The British on their right try to keep the Highlanders at bay with platoon fire. 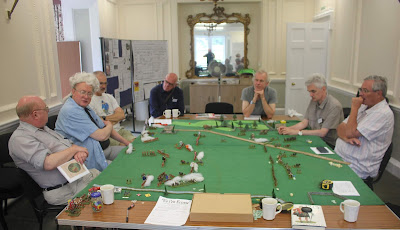 Combined charges by the Highlanders and the supporting cavalry finally get a proper breakthrough on the British right. In the distance the British cavalry has broken through as well. Elsewhere a number of the Highland units have driven their opponents off the table, and we're waiting for if and when they return. Otherwise their bolt is pretty much shot. The British have stabilised their line and are starting to press up on the Lowland Supports.

We were then out of time, and it looked like a marginal British victory. In the interests of balance I didn't make the Jacobite left boggy and difficult to traverse. I also didn't penalise them for being hungry and tired having been up all night. So a game that was in the balance most of the time was what I should have expected and was what I got.

The session took about 3 1/2 hours. It was the biggest game I've put on with "Va t'en Ecosse", and also with more players than normal, none of whom had played the rules before. I was ably assisted by Phil who reminded me of the bits of the rules I'd forgotten. Honestly, I can't do those late nights anymore. So I'd call it a success.

I have a few more units to paint up for these armies., and more gunners too (I need to find some RN gunners, as they served at Prestonpans), but mostly these rules are giving me the game I envisioned. The battles look like the historical encounters, and historic tactics seem to pay dividends.

You'll see from the pictures that I had a number of spectators who stuck with the game for most of the session, plus several people who came in and said nice things about the game and the figures.

Yes. Very pleased. And then off to lunch.
Posted by Trebian at 15:49