Conference of Wargamers 2019 - Saturday Afternoon Edgcote into the evening.

After I had packed Culloden away and had lunch it was time for me to assist on a session, as Phil presented the Edgcote model and associated game. 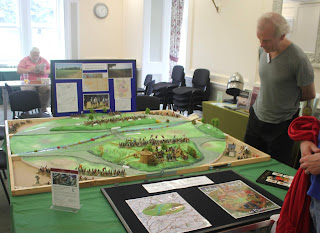 Despite WD & COW attendees professions to be interested in the game rather than the toys and the terrain, everyone loves a bit of 28mm eye candy. My only difficulty was explaining why we were using Hail Caesar. Most people got the reasoning. 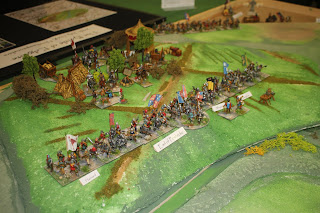 The Royalist encampment. Young Henry Tudor and his companion Richard Corbett have had a more complete paint job, and given an extra bit of scenic basing. 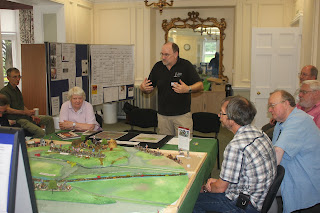 Phil kicked off with an introduction, and then passed over to me to say some more about why the battle was fought. I hadn't really given this intro much thought, as I've been so focused on the Culloden game. I hope I was coherent.

Phil had given more thought as to how the game should be played and the rules in HC we need to use and adapt. We still have an issue with how we deal with the opening position of Pembroke and Devon, and whether or not they are present. For now we are more "Wavrin" than "Hall", with both armies deployed on the hill and ignoring the Barmaid Incident. 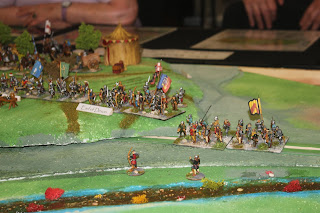 Stafford got provoked off the hill with some archery. We were still having issues with units not moving because of the command roll. I recommended afterwards that we went for command values of 8 instead of 7 on 2d6, which gives you closer to a 2/3rds chance of moving. 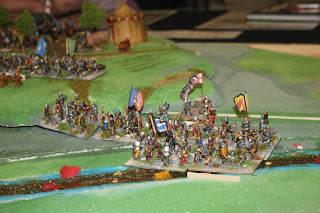 The Rebel right wing followed up and combat ensued across the river. 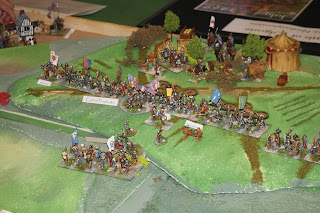 Abandoned by his non-moving colleagues Robin himself advanced on Edgcote Lodge Hill and the Royalist army. As a side note our archery skirmish screen rule worked quite well, and one player who uses HC from time to time said he would adopt it. 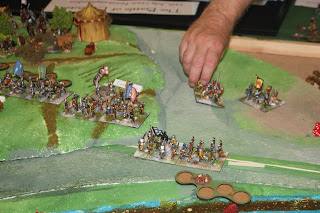 Devon's men were broken in combat. No need to be scared off by arriving reinforcements. 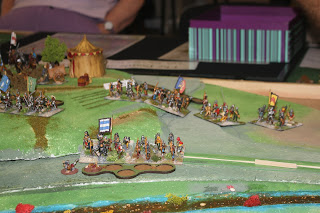 It was a tough fight, however, and the rebels concerned retired to their hill top. 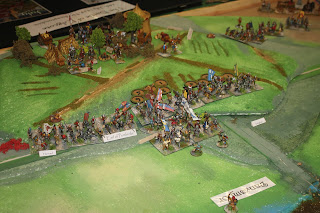 The Royalists headed down the hill to attack Robin's men. A tough fight. Robin's earlier unanswered archery hits were keeping him in the fight even though outnumbered. 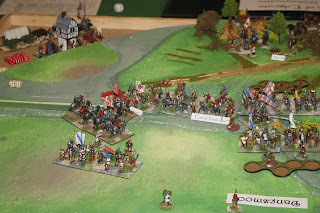 We were dicing for reinforcement options through out the game, and for the first time ever Clapham turned up with Warwick's proper advance guard, - a mounted retinue. They hammered into Pembroke's right wing. 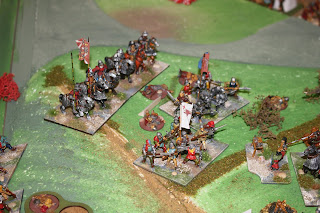 The cavalry broke through and overran the encampment, at the loss of Clapham, whilst he performed various valiant feats of arms. 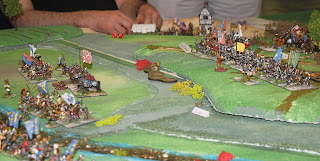 With the death of Clapham, the retinue had over-reached themselves and so retired. 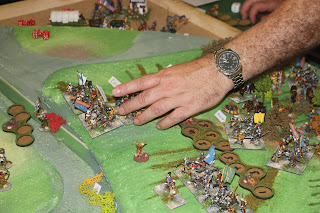 Fortunately for the rebels Sir William Parr had finally arrived and was able to press home the advantage gained. 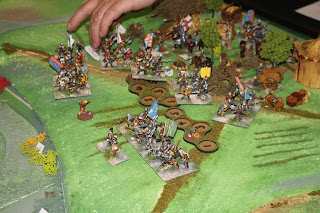 And very soon the rest of the Royalists were fleeing. Another hard fought win for the Rebels.

It was another close game, however, and could have gone either way. I'm afraid I'm never going to love HC. It is a tool kit that enables you to adjust the rules to match what you need, but if I was going to do that I'd just write my own rules anyway. However, that wouldn't achieve what we want, which is to use 28mm & HC as a hook to get a certain wargamer demographic to stop by and play the game or at least talk to us.

We're still not quite perfect on how we are using the rules, and Phil & I have had further conversations about what is needed. No. Let's be fair. Phil has done pretty much all the thinking, and then bounced the ideas off me. He's looking to exploit or create natural "lulls" in the game when reinforcements move and or arrive, which I think will capture more how the battle seems to develop. My sense of the actual battle itself is that there's a fair amount of hanging around and hanging on waiting for reinforcements to arrive. That's certainly the case for Robin, who knows where his reinforcements are and probably when they will arrive, so his task is to fix Pembroke and Devon in position so they can be destroyed.

I will be really interested to see what the offside reports from the players will say once the are published in Nugget. This is the closest I've come to running a game with players in the various playtests. When we were at last couple of shows it was mostly just me & Phil, and I was running the society stand whilst Phil ran the game. Hopefully we'll get more help for the next two, and I'll be able to talk to people over the model.

After we wrapped up it was time for a pre-dinner drink and then dinner.

After dinner I was initially at a loose end as I had missed the sign up for the RPG session I normally play in (I was gratified to hear later on that I was missed), so I wandered out to the patio, and took part in a session on large scale kinetic model guns, - those powered by either small gunpowder charges or springs. 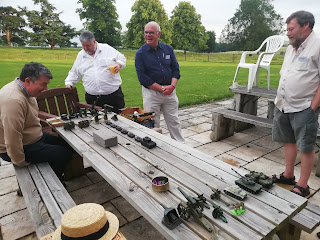 There were some lovely, lovely models here. The early ones truly are working scale models, and not the crude guns I mostly recall (I find the Britains 25pdr hard to love). If you can see there's an AA gun at the far end of the table. You fire it by putting several caps (as in the paper strips) into the breach chamber, and pulling a lanyard. It's a nice piece of engineering. 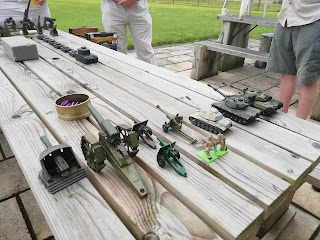 It was pointed out that the quality steadily declined over the years as the models with proper rivets and nuts and bolts were too expensive to machine and assemble.

And I still say that, lovely as they are, I still don't leap at the chance to wargame with them as I honestly can't hit a very large target at short distance.

After that I retreated indoors and found 5 other people to play the "Northamptimeshire" card game I've been working on. It's the first time I've played it with 6 people, and it worked very well. So I know it works as a game, but I'm still stymied as to how I get it into production without breaking my personal bank.

And then as midnight was beckoning I went to bed.
Posted by Trebian at 20:35