Sunday morning is always a bit blurry, so I needed to check my pictures to remind myself what I'd done.

My first session of the morning was John Bassett's "Not just pikes and elephants", a discussion and workshop on Hellenistic urban warfare. He took us through three detailed accounts, the most spectacular of which was Pyrrhus' attempt to storm a city at night using elephants, one of which gets stuck in the gateway. The other two were Ptolemy III's invasion of Babylon and his attempt to track down a high value target and finally Cleomenes III of Sparta and his attempt to raise a revolt in Alexandria. After doing this JB divided us into three groups to look at how we would game each of the scenarios. The group I was in got Cleomenes. 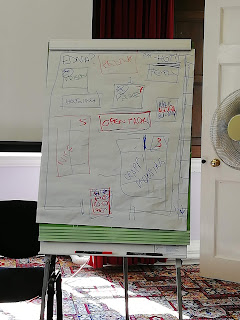 I can't recall how the Ptolemaic group were going to deal with their problem. The Pyrrhic group were going to build four man elephant cardboard box simulators. My group's solution is a bit more toy soldierist. As the Cleominid revolt started with 12 men trying to raise support by running round the streets banging on doors, I thought that you could do this as a 30 minute participation game. The player(s) start with a tray of 12 figures, and they need to raise another 12 (say). They do this by moving round a map or model of Alexandria and each area will have a response value and a resource value. Other locations will have problems to solve. There'll be a morale track, which will fall for every turn they fail to get more followers. When that reaches zero they all commit suicide.

Or something like that. You can see the results of our deliberations on the flip chart above. 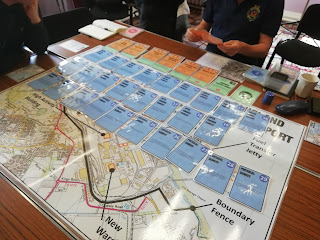 After a morning cuppa and home made cookies off to play "Cyber War". This is a cyber warfare training game used in the UK. The scenario is that Redland is trying to thwart invasion plans by Blueland by staging a deniable cyber attack on the only Blueland port. A port that looks a lot like Immingham. But isn't.

We had lots of cyber type weapons and tricks to deploy and some cyber defence experts in the game. I think this might be only my first or second cyber war game and I'm still a bit of a novice at it. I therefore took my role as identifying systems we would want to attack (eg the cranes, or lock gates) then see if they were vulnerable.

Apparently this isn't how its done. Cyber warfare is a lot of "throw it at the wall and see what sticks". Once you've found a weakness you then decide what to do with it. At least I think that was the message.

Anyhow we found a vulnerability and identified a prime slot. We needed to find a time when the tide was on the turn (going out), preferably on a Friday and close to 5pm. This brought us the working slogan of "It's Friday, it's 5 past 5, and it's CRACK-A-LOCK!!". I guess if you find this funny you wouldn't be any good at hacking on account of advanced age.

Well, it worked and we drained the docks with a half loaded ship in the port. This hit bottom and keeled over, rendering the loading area useless and wrecking loads of supplies.

After a full roast Sunday Lunch we had an hour long session before the WD AGM. 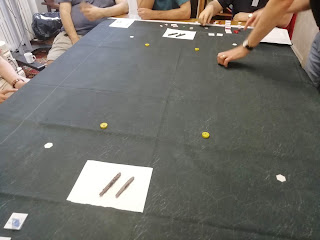 We were a US two carrier group, and they were the same but Japanese. Alan was trying to develop the game to allow for searching for enemy planes and ships, but in an open game. This meant using dummy counters for ships and for planes. 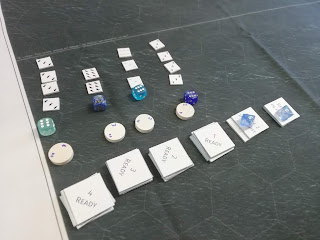 For the planes you can have up to four flights in the air, launching two per turn, including dummies. The big square counters have plane type and dummy on the back, and you have the counter on top of the stack for what that flight is doing. The dice are used to represent the number of turns you are in the air. 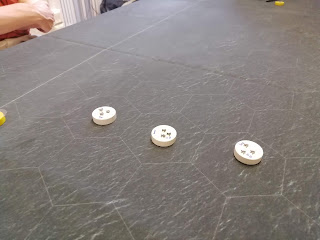 It's not obvious, but we are moving on hexes. And the draught style counters have little planes put on them when you know what they are.

We only had an hour to play, which was nowhere near enough to learn the system and get a good look at it. We succeeded in getting a dive bomber strike on one of their carriers, but lost a load of planes in the process. The dummy system didn't really work that well and it was clear this was early stages of development. I hope Alan got a decent number of "takeaways" from the game, and will be back again.

And that was it. A quick AGM with no surprises, deposit paid for next year. Then a cup of tea and cake, and a last minute game of "Northamptimeshire" with some people who understand voluntary sector "kickstarting" (very helpful) then it was back in the car and homeward bound. CoW over for another year. New games played, old and not so old friends met again and new friends made.

Practically perfect in every way.

Email ThisBlogThis!Share to TwitterShare to FacebookShare to Pinterest
Labels: Conference of Wargamers, CoW