In order to allow me some recovery time after COW Richard put on another RCW skirmish game using "Triumph and Tragedy". This was a follow up to the game we played in January.

I got the Reds again, and Steve played the Whites. 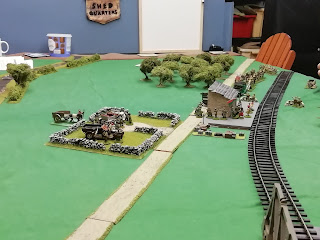 Having escaped from the last scenario still in possession of the "Princess" my brave Red forces, supported by some Austrians were holed up in a station (Richard had bought some new track!) waiting for a train so we could get to Moscow with our prisoner. Alas no trains had come for quite a while. 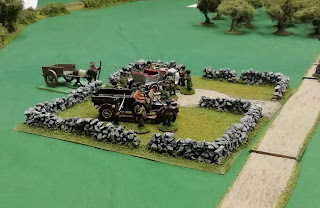 We had two vehicles, - including the stolen Rolls Royce from the last game - but alas only one driver. 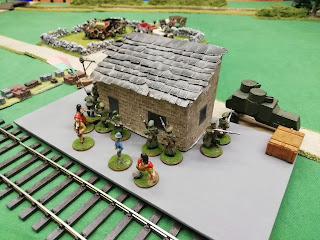 There were some Gypsy Girls dancing on the station platform. One squad of my men was in the station house. The umpire refused to let me order my men to loop hole the walls or clear the slates to fire from the roof, which rather cramped my style. I did have an armoured car to cover the main road, however. 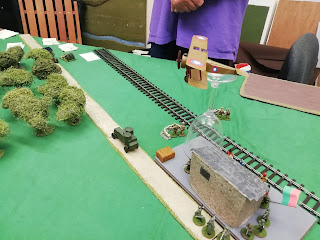 Soon the Whites appeared, deploying some artillery, and calling in some air support for a bombing run. He missed the building (lucky, as if the bomb had gone through the roof I'd have lost a lot of people) and injured one of the Gypsy Girls. See. That's how the Capitalists care for the common people. 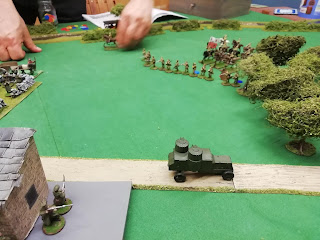 Then loads of White Infantry and Cavalry, - they may have been Czechs - emerged from the woods. The Putilov armoured car swung its MGs round and literally gave them both barrels. 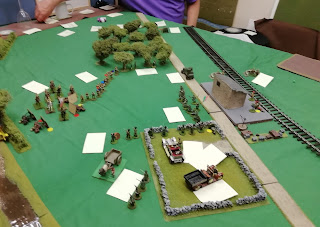 A litter of order cards covers the table. The section in the walled paddock has formed a firing line, and the men in the station house have likewise formed up to deliver devastating fire. My character has rushed to the Rolls with the hostage, only to find I can't drive. The driver from the lorry is summoned. 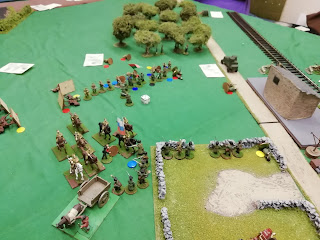 There's loads of firing, and my men from the station charge the infantry and the cavalry charge the men from the paddock and it's all confusion. Meanwhile the Rolls has been driven off and I'm making my escape whilst the brave Bolshevik forces hold back the White Tide. Mission successful at the small cost of basically everything.

"T&T" has some interesting mechanisms, and I would like to read the rules properly (although not enough to want to buy them). There are inherent problems with skirmish games once you get beyond four or five men a side, and groups start to need some form of unit coherence. Only by being blind to these problems can you make all of this work. Luckily all this can be salvaged by setting up a good scenario, which Richard did. It was also explained to me that I was supposed to lose and the Whites were supposed to recapture the Princess, setting up the next game in the chain.

What can I say? I'm a military genius.