Well, who'd have thought it?

Well, there's no other way to put it, really. My Edgcote book won an award in the Northamptonshire Heritage Forum's annual awards. Yes. Best Publication. Ahead of many worthy works by local historical societies, collecting Victorian photographs or researching the minutiae of the lives of the names on the local war memorial, an academic work on an obscure battle in the corner of the county, which includes an appendix in Welsh won the award.


I have to say that I was totally gobsmacked when it happened. We were up for two awards (that is, the Northamptonshire Battlefields Society was), and I'd written both of the nominations. I thought the other one was much stronger, and I only really chucked this one in because there was a category and we hadn't published anything else.

What makes this gratifying is that the judging panel is mostly made up of both Heritage professionals, and also academic historians. It's great when people you know say they like your book, and you hope they're not just being nice*, but these folks don't know me and are proper experts too. Bloody marvellous.

There was a proper bash to hand the awards out. It took place at Holdenby House, - you know the one where Charles Stuart, that man of blood, was held captive before being whisked away by Cornet Joyce**. We had the Lord Lieutenant there, one of his deputies, my local MP and Earl Spencer, as well as a local radio personality (who would be well known to you if you lived round here). We had drinks on the lawn and nibbles and everything. It was dead posh. And I got to make an acceptance speech where I was able to eyeball my MP (who covers Naseby) and tell him that it wasn't good that battlefields had no statutory protection, and that the memory of those who had died on them deserved better. 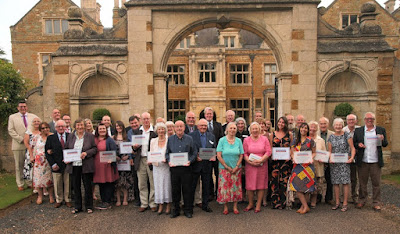 And here's a picture of all the award winners. I'm centre left as you look at it, in a stripy blazer (dead stylish, me). The tall fellow in the middle is Earl Spencer.

Anyway, if you want one, see me at a show (we're doing Other Partizan and Hereward next), or come to one of our talks. Or there are copies in the Delapre Abbey shop. Or you can simple order from Amazon.

And don't forget our Conference on Edgcote on 27th July. It's going to be brilliant.

* Although I know this isn't true of Bob Cordery, who has gone out of his way to recommend the book.
** Well, not all of the house. The bit that's left was the kitchen wing when the Hattons first built it.