It's August, so it must be time for Partizan again.

We didn't have anything new, except that the rules system for running Edgcote is getting a bit more intuitive. We were lucky to have Paul M assist us, as it's a hard day, given our amount of display space and the large game. In fact the game is sufficiently large that we had to take two cars, as my estate car is still in the repair shop. 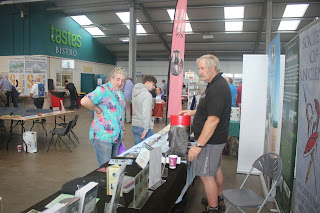 We had a steady traffic throughout the day, without ever being really heavy. I recognised a lot of faces as Partizan regulars, so as we're not really showing anything new they don't tend to stop. 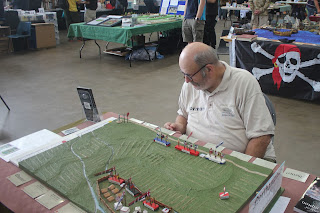 Norman stayed a while to take the weight of his feet, however. And played 1460. And had a thoroughly wretched time. He managed to get Edward of March, Richard Neville & Fauconberg killed, as well as the Archbishop of Canterbury. Wars of the Roses? What Wars of the Roses??? 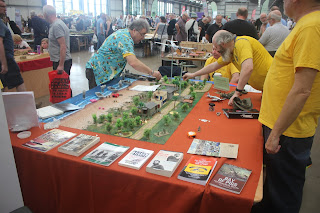 I did a quick turn round the hall to pick up some stuff and eye the games. I liked the idea of this Bay of Pigs game.The guys were enjoying themselves. They even had an SU 100 like this one below: 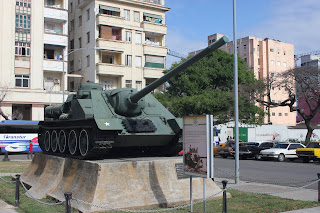 This is the one Fidel Castro used to shoot at the US ships off shore. He supposedly sank one with it. 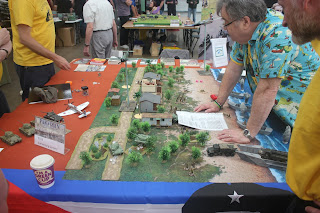 I asked them if it was Fidels' tank. The bloke said "Dunno, It's my brothers". If he was playing Raul Castro I guess that's the right answer, but I'm not so sure that's what he meant. Still, nice to see something different in terms of subject, although the source books I could make out at the end of the table mainly seemed to be Western and not Cuban. What it has done is inspire me to have another look at the whole operation. I thought I could do something with my AK47 Republic forces when I got back from my Cuban trip, and I still think that's possible. 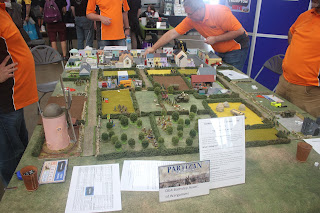 This game was about rioting in Trumpton. Nice idea, but the figures used didn't look like the figures we all remember so fondly (although I didn't see Pippin Fort turn out, so I may be partly wrong), and if you're going to do this sort of thing, you need to get the look right. 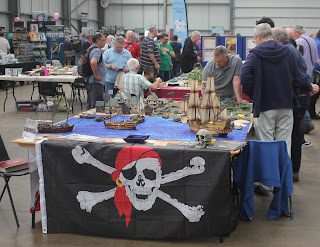 Across the way from us was a big pirate game. Aaaarrr! And all that sort of stuff. 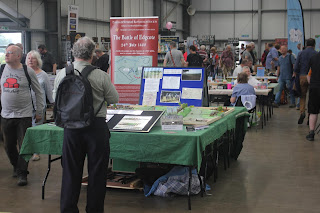 We had 28mm Edgcote as our game, which was slightly offset from our main run of tables. 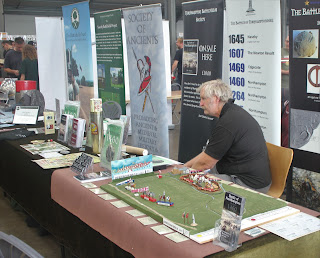 We do have an impressive array of banners when we have them all out at once. 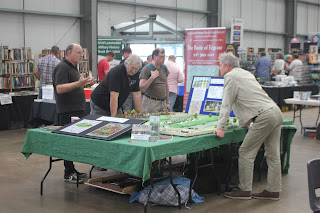 Phil & Paul got to run the game through once with a member of the public, and got a Rebel win. We get a few people to stop and chat, but the layout we're forced to have at Newark means our resources in terms of people can't be easily shared between the show stand and the game. Especially when you factor in comfort breaks, tea & coffee runs and the odd bit of retail support. And we really could do with more volunteers to do an hour or two. It has been a long time since I played anyone else's game at a show. It doesn't help that this clashes with the second day of the Bosworth big medieval weekend every year, as a couple of our committee members are committed to that. 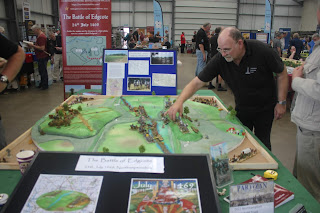