It's all about me. Truly it is. 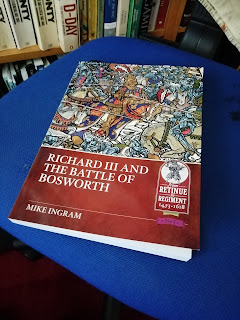 A month or two back I proof read, fact checked & commented on a book written by a Northamptonshire Battlefields Society colleague, Mike Ingram. This book, about Richard III & Bosworth, isn't an NBS publication, but is being put out by Helion.

I have railed against Helion in these pages before, and warned my colleague about the proof reading and editing. Still, he stuck with them, and I believe they have actually employed a proper editor for him, so high hopes that it would all be okay. Anyhow, writer copies arrived this week, and I picked one up. It's a nice looking book. I'm working my way through it and compared to some other Helion products it hasn't been marred by masses of typos and page setting errors (I noticed a problem with the family trees as soon as I opened it, - the Tudor wiring diagram doesn't have a title, although there's clearly space for it, and Edward V isn't highlighted like all the other kings.).

So why is it all about me? Other than a credit in the acknowledgements? 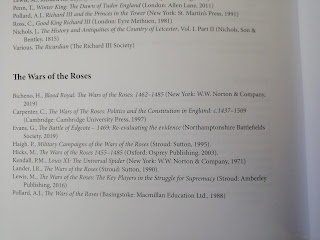 Well, it is the first book to list my Edgcote book in the bibliography, that's why! Yes, there it is, within 6 months of publication already adding to the academic weight of a book about the Wars of the Roses.

It has also been gratifying as I read through it to pick up where suggestions I have made have been incorporated in the text (or even things removed!). What is odd to me is the thought process in what has and hasn't been included. Mike & I don't see entirely eye-to-eye on a number of Richard III issues. He, together with the President of the Richard III Society, think that Richard didn't have a hump, and if he did then no one really knew about it. And that bloke in Shakespeare's play? That's really supposed to be Robert Cecil, who was really a hump back*. I, however, do think he had a noticeable curve to his back and that lots of people knew (his armour had to be specially made). The original draft also had Richard having the throne thrust on him by people clamouring him to take over. The final description of Richard's coup is very even handed and seems to carry with it the air of paranoia or distrust that surrounded Richard as he cynically bastardised his nephews and stole the Crown.

In truth that's not really important in the context of what is really significant in this book. There's very good stuff on the way late medieval armies were raised and fought, and the European background to the campaign and battle, placing Henry Tudor's invasion in the overall context of Louis XI's scheming is ground breaking for a popular history book on his 1485 invasion.  All of that is really good, as is the analysis and description of the Battle of Bosworth itself. That makes the book a must buy if you are interested in the period at all.


* Robert Cecil really did have a curved spine and hump. He suffered from scoliosis, the same condition as Richard III. This fact is generally not used when Ricardians point to the Robert Cecil analysis.

Email ThisBlogThis!Share to TwitterShare to FacebookShare to Pinterest
Labels: Bosworth