For reasons I won't go into here I left organising the regular weekly game a bit late. As I was casting round for something to put on quickly, my eyes fell on RFCM's "BAIT", the PBI version for the Spanish Civil War.

Since we last did a game at this level I've acquired a load of extra Spanish buildings from Bob Cordery. What an excellent opportunity to make use of them.

In this scenario (I don't use the pre-game shennanigans in BAIT) several platoons of militia (1 Anarchist, 2 Communist) were tasked with seizing a small town. Once done, this would be consolidated by the Asaltos from the neighbouring large town. The town itself was protected by some Guardia Civilia, who could call on a Falange section and, if really needed, a small regular army force from a nearby barracks.

To add some more spice the Anarchist commander had to seize the bank, on the Town Square and pinch the gold stored there, whilst the Communists needed to capture the Town Hall with all the land records and burn them. 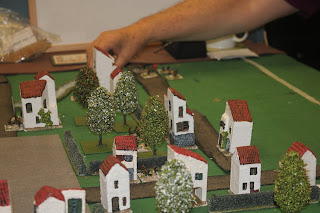 Dave was the Communists, and started with a broad approach. He was soon under fire from the Police. 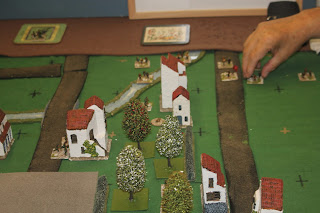 In the ensuing fire-fight, both sides took casualties. 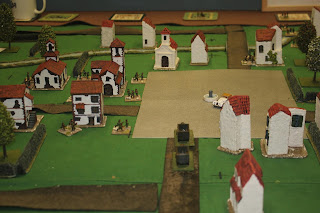 Tim was the Anarchists, and took a more direct approach by storming up the road in his armoured trucks. 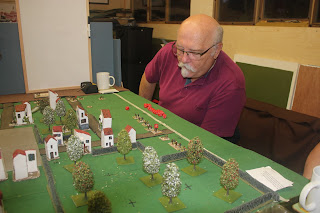 Dave then followed up with his second platoon, 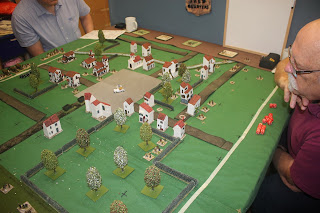 They worked their way into the buildings, taking fire as they went. 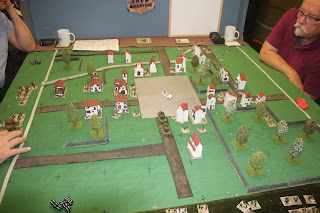 Ah. Yes. The long establishing shot I forgot to take at the start of the game. Key buildings are to the left of the Town Square 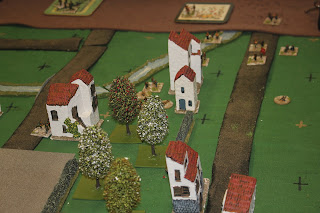 The fighting on the far side of the board gets more intense. 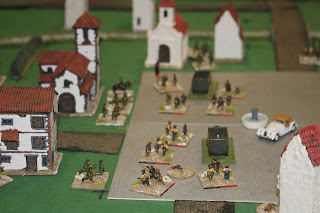 Tim gets out of his trucks, but without enough APs to assault the buildings. A fire fight breaks out 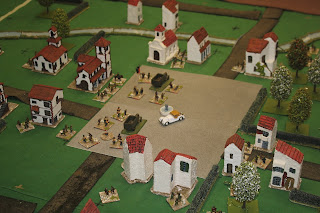 Tim is now pinned down from all sides of the Square. He's starting to take casualties but without inflicting any in return. 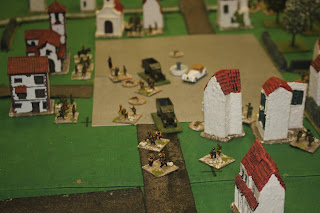 Soon his platoon is broken, and heads off the table. 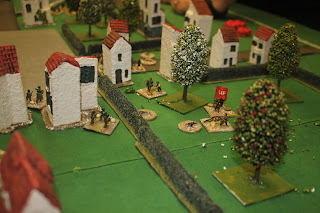 Dave is now pinned down in the orchard. 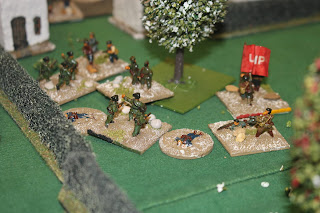 The Guardia launch an assault... 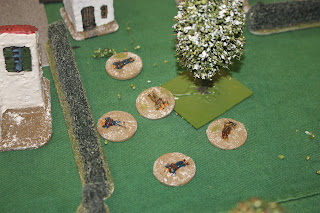 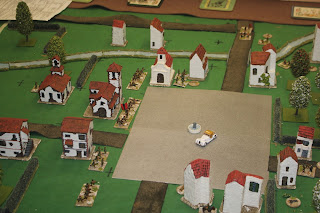 Meanwhile the Falangists have marched into town, flag waving, and occupied the bank. 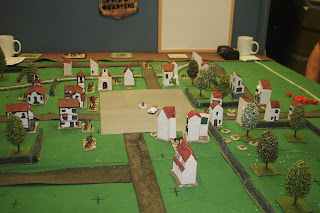 One of Dave's platoons is now broken, and the other is pretty badly trashed. The Asaltos have arrived, but seeing that the town is still firmly held, decide not to intervene. Game over.

So, a big win for the Nationalists, helped probably by the inexperience of the Republican players and some lethal dice rolling on both sides. It gave an intense game which everyone enjoyed and I probably need to bring this back more often, so players know what they should be doing.