Big is beautiful, but so is small

As the Northamptonshire Battlefields Society we've been taking Phil's 28mm Edgcote model round the shows this year, and we've had a load of good feed back about it. It is the third Northamptonshire battle model Phil has built, after Naseby & Northampton, both of which were done in 15mm.

We don't take all three of the models to shows with us. We could probably manage the two 15mm models, but the 28mm model is a car load on its own, without necessarily putting in the rest of the Society stand. What we tend to do, in fact, is take one model and then my 1460 game board as well, so we cover two battles.

I therefore had a think and concluded that what we needed were two other small models/game boards, one for Edgcote and one for Naseby. We could then major at shows with one of the bigger models, but cover the other two battles with smaller displays.

My first attempt was therefore to put together an Edgcote model using 6mm figures that fits on a board the size of my 1460 game, or about half of a pasting table. 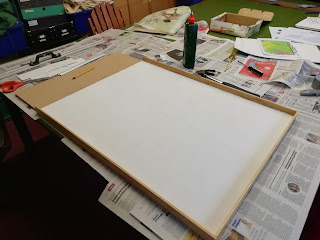 I thought that I would base it off OS maps to get the contours and lay of the land right. I did this for 1460 and built it using layers of mdf. Consequently it is a bit heavy. For this one I used sheets of modelling foam. Luckily for me Hobbycraft had a sale on, and I got a big stack for next to nothing.

I scanned in an OS map, and then got to work with Serif DrawPlus. I put in a layer for each contour line, and traced it with a pen mouse. I was then able to superimpose the grid that I needed for my board, so that I could scale up the various contour layers. 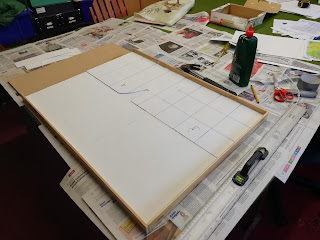 Here's the work in progress. That's a base layer, with half of the first contour layer on it. Each layer was securely PVA'd in place. 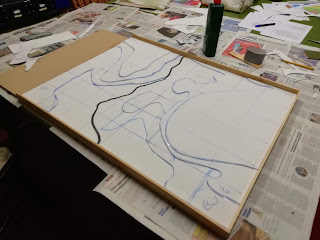 Several layers in and I'm able to carve out the track of the "riviere" that the armies fought across. 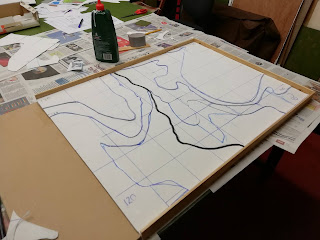 The contours mount up. You can see that I put a frame round the outside to protect the board and neaten it off. 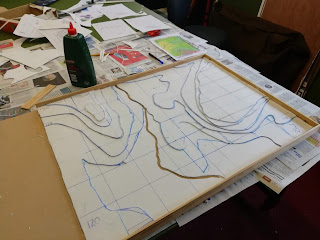 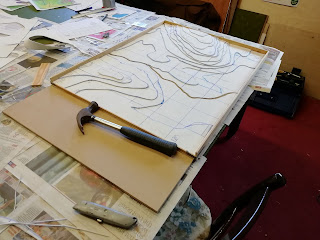 That's all the layers done. The final piece of edging frame is also gluing, being held in place by a hammer as I don't have a big enough clamp. Next I mixed up a bucket of filler from a packet of powder, rather than use ready mix. That enabled me to smooth the contours into one another by varying the consistency of the filler. NB The vertical scale isn't correct to the ground scale, as that would have increased the depth by about twice, and I thought that would be too much. I'd have had to interpolate the line of the contours to avoid any cliff edges too, and I wasn't comfortable with that as an idea. Once it was covered I made a wide spaced tooth cardboard comb and ran it across the filler to approximate ridge and furrow field systems. Could still see the felt tip pen grid through it, however. Ooo-err. 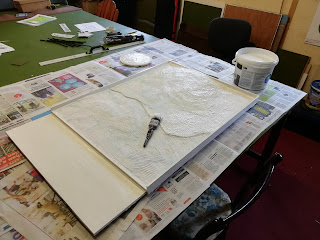 Once that dried (and it took DAYS!!!) I painted the surface with textured paint to seal it all in and protect it, as well as give it a consistent surface. And painted the endzone and frame with gloss white paint 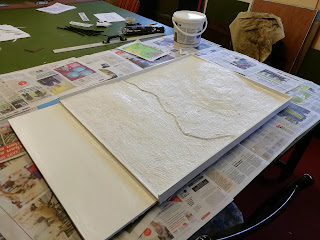 This took forever to dry too, but it covered up the blue grid lines. 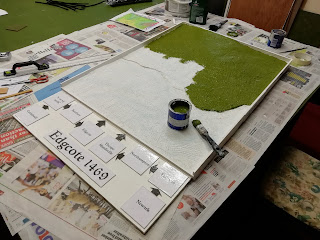 In the meantime I did some labelling for the endzone, so that when it all dried I could get right to finishing it off. Textured paint is great, as it takes emulsion paint really well. Which is good, as that's what I use to paint all my bases and boards. The place names and the arrows are aids to explaining what happened, although they might be part of a 1460 type game eventually. 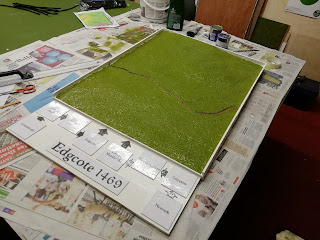 It all looked a bit green at this point. 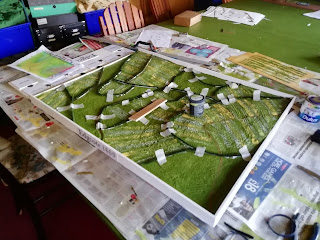 We have a good idea of where the field systems ran in medieval times, due to an archaeological atlas produced by Glenn Foard and colleagues. I was able to overlay this onto my OS grid. I was then able to put in hedges using pipe cleaners. You can get them in black, and I dry brushed with my base green. They were buggers to glue down, however, hence the masking tape. I replicated the strip fields with different crops by buying a variety of matchpots from a DIY superstore, and painting alternating strips of colour. 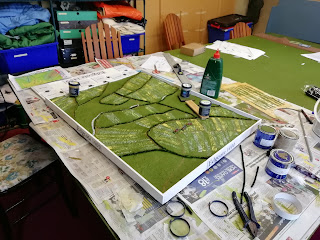 Those hedges still wouldn't glue down. The most recalcitrant were weighted down with paint pots until they jolly well stuck. 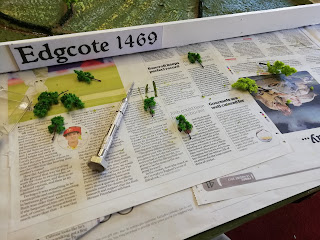 I'd acquired a couple of packs of trees from Leven Buildings (which, incidentally, I can't find listed on his website) and set to work with my trust pin drill. 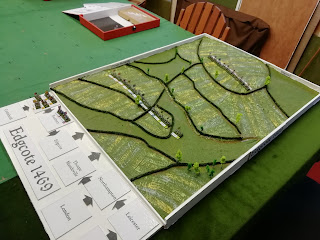 The trees mostly go on field junctions and on hedgerows, although there's a small plantation part way up one side. The trees are removable for ease of storage. 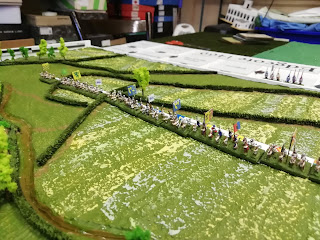 The figures are still being painted, but I've finished the main armies. They're Baccus 6mm, and very nice they are too. This is Redesdale's army 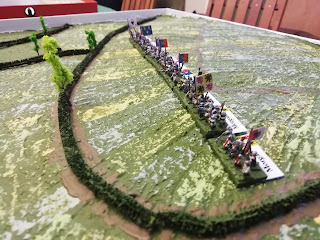 On the opposite hill stand Pembroke's forces. The banners are partly scanned from the Freeezywater books, but where they didn't have drawings I cheated and put the blazon description into this website rather than paint them by hand. It did most of what I wanted, but it didn't do quartering well (or I couldn't work it out), so for complicated banners I generated each quarter separately and then stuck them together in DrawPlus. 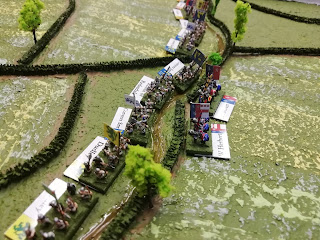 Here's Pembroke and his brother charging the rebels on the line of the stream. Each base has a label with the relevant name and heraldry. I may dispense with these, as they get in the way a bit, and they interfere with the magnetic adhesion in the storage box.

I have a bit still to do. I've painted Devon's forces, but I haven't done Redesdale's skirmishers who start off the battle. Part of Warwick's men are done (from an earlier project where they were never used), but I have to finish them, as well as Clapham's reinforcements and Gates & Parr. I've also got a bag of figures for Edward's army, complete with some little guns. Oh, and a load of tents for Pembroke's camp on the hill top.

However, I've made good progress, and I'm pleased with the look of it. It has met the design criteria, - it is fairly lightweight, easily portable, and can be set up in minutes. With some luck I'll be able to take it to a speaking engagement I have at Banbury Museum in October, or if not then at the Moulton Literary Festival in November.

Once it's done I can set about thinking about Naseby, which looks like it will present a slightly different range of problems.