Having said Falkirk was my last game of this development cycle, it turns out I lied*. I needed a game for the West Country visit, and having left it to the last minute, grabbed the nearest set of rules and cobbled together some scenario changes for Prestonpans. 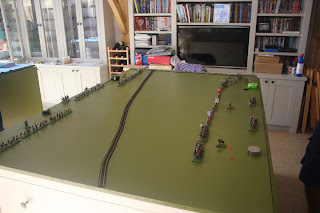 There are some small sized units which don't work well under "Va t'en Ecosse" as written, and there are some other issues with the artillery, and the fact that the Jacobites come out of the morning mist. I made some changes, although I didn't test them and didn't really get them right. And when I set the board up I put the trackway in the wrong place. I moved it for later pictures. 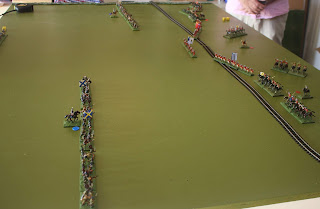 My main mistake was setting the armies up too far apart. That gave the Government forces too much time to react to what was happening, even tho' George "Chris" Murray went of lickety-split as per the original battle.

Perceiving that the centre wasn't threatened initially due to the laggardly approach of the Jacobite middle under Prince Charles, Phil & Gary bowed out their infantry to try to enfilade the on-rushing Highlanders. 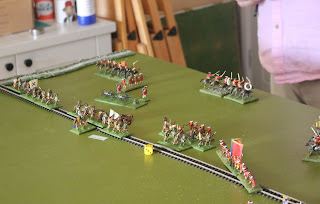 Murray's men were soon stuck in, easily weathering the one round of firing from the artillery. 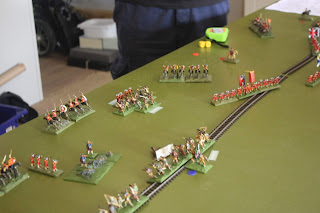 One of the cavalry units on this flank was beaten back by the charge, but didn't rout. 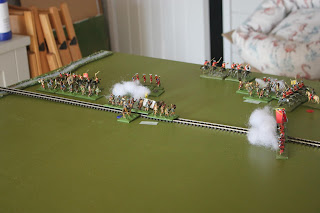 This enabled Phil to deliver some volley fire... 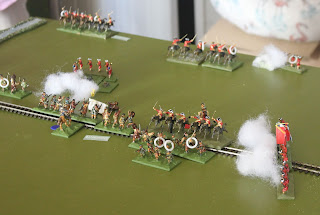 ...before charging with his reserve cavalry squadron. 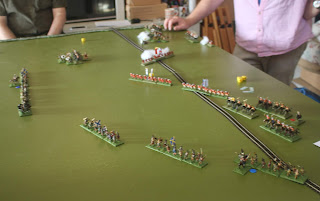 On the other flank Richard, as the Duke of Perth, went for an oblique attack, whilst Prince Charles finally made an appearance. 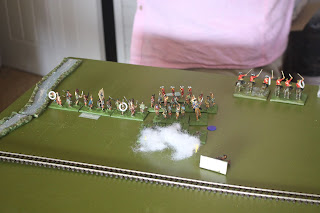 A brave attempt by the artillery guards to hold off the rushing Highlanders failed, sending them tumbling back, together with the death of their Commanding Officer. 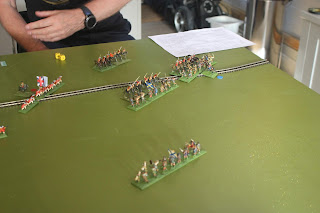 Richard succeeded in hitting the Government both the left flank cavalry squadrons simultaneously. 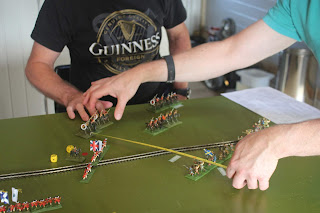 He bounced them all back, and helpfully measured the retreat distance for Gary. 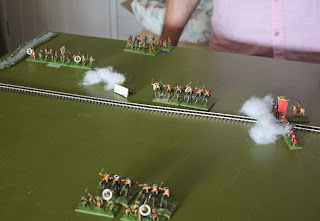 Mixed fortunes on the other flank saw the Redcoat cavalry win a melee and drive back one of the clans. 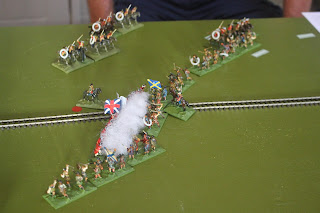 Musketry finally broke out on the Jacobite right. 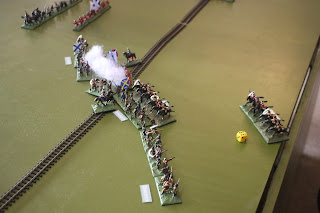 The cavalry was now putting in a charge or two, out performing their historical counterparts (passing the new "let's just get out of here" die roll easily). 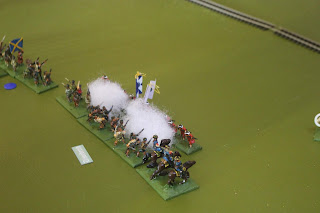 In the centre the Redcoat infantry closed on the clans and delivered a devastating volley, that rocked them back on their heels, and enabled an advance to contact. 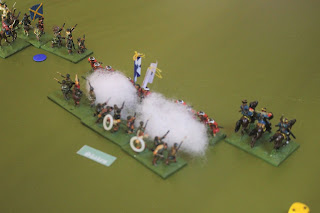 The stunned Highlanders were steadily driven back. 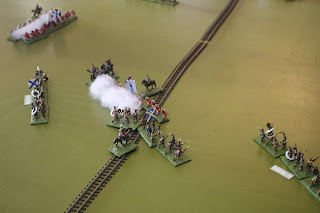 The Government left had now finally sort of collapsed. 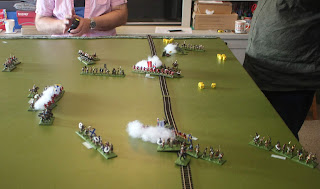 It all ended in a bit of a mixed bag. The Government forces had clearly done much better than historically, but had still taken a beating. If dinner had not been calling, and if we'd played to the bitter end, I think that Johnny Cope's infantry would have finally been ground up having put on a decent show.

In conclusion it all took longer than the 6 minutes of the actual battle and it didn't really run as expected. It is a tough call to re-jig things enough to keep the Redcoats interested without making the game something other than Prestonpans. If I ever publish the rules and scenario booklet I'll need to give this a lot more thought.


*Thus proving I am cut out for a career in politics.
Posted by Trebian at 10:01