I grabbed a few minutes between other responsibilities over the weekend to paint up the tents for Pembroke's camp on the Edgcote model, so here's a short update on the battlefield model.

The tents are all from Leven Buildings, and are a mixture of his medieval tents and Roman marching tents. I thought that the medieval tents would do as accommodation for the nobility, and the Roman ones for the peasantry. I know that the foot soldier probably slept on the ground or under a lean too made from brush wood, but these give the idea of a camp. 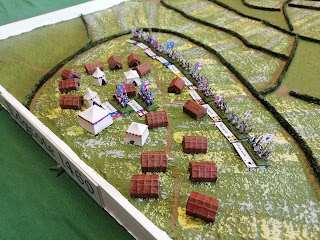 I'm not sure whether I've over done it for the number of tents I'm putting out. There's a big area on the top of the hill, however, and nothing else to put there. Well, I have some Baccus oxen and pack mules left over from other projects, so I'll put them in, with some random figures from the bits bag, probably. 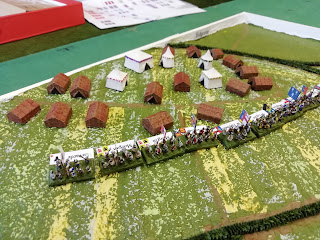 My other dilemma is whether to base them up as well. My inclination is not to bother, as the 2mm bases will make them stand a little too proud, and might stick up a bit, given the curvature of the hill. In other circumstances I would have glued them down, but, as with the trees, I want to minimise the height and any sticky-out bits for transport purposes.

I probably need to find away to add some banners, floating over the ensemble, but which ones and how I go about doing it are yet to be decided.
Posted by Trebian at 16:15