After a brief hiatus we returned to the modified PBI game we started a couple of weeks back. We had three new players, Steve (who joined me with the Italians) and Richard & Tim who took over the Free French. As none of them had played PBI recently, if at all, we didn't get through as much of the scenario as we'd have liked whilst players familiarised themselves with what was going on. 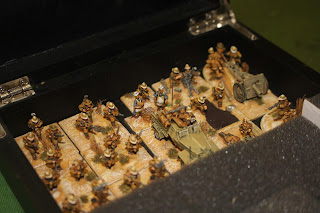 Phil brightened up my evening by showing me the box of infantry reinforcements I might get on. 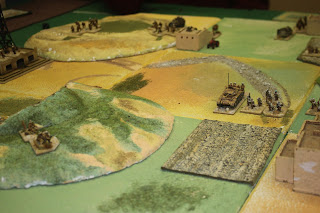 That Crusader was still dominating the centre of the table .Steve got his anti-tank rifle up on a ridge nearby and took several pot shots at it, all to no effect. 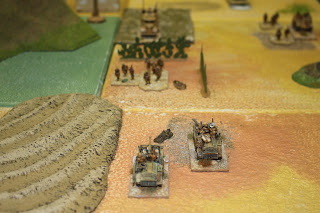 On my side of the table Tim was pressing me hard with his infantry. We both took casualties. I threw mine out of my truck. 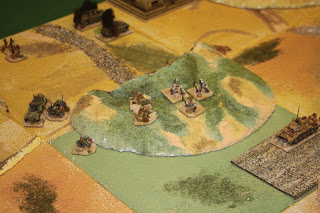 The anti-tank rifle and LMG support got close assaulted whilst I was boiling a kettle. The LMG motorbike combo skulked out of the way, and avoided the fight. 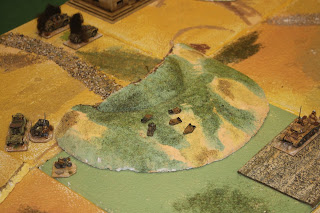 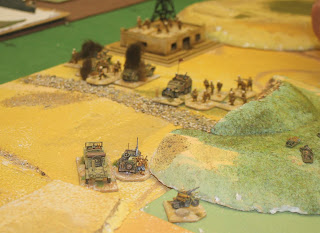 Then Richard brought up infantry to put pressure on our company commander and the field kitchen. 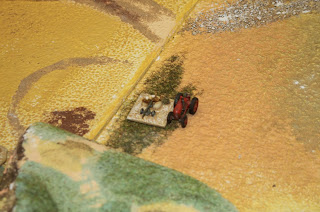 He also commandeered an old tractor and mounted and anti-tank rifle on it. 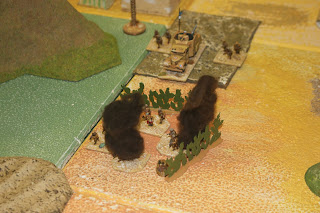 My last act of this round of the game was to plaster this square with HE. I actually hit something.

Back for more next week, when hopefully some of our reinforcements will turn up.

Email ThisBlogThis!Share to TwitterShare to FacebookShare to Pinterest
Labels: PBI