So we had another evening in the desert, left set up from last week. As it was the French turn, we, as the Italians, shouted "Opportunity Fire" and opened up with everything we had. 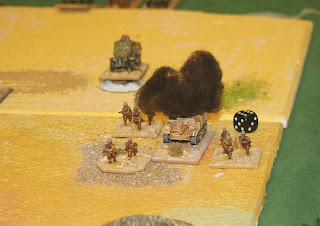 I hit that bren carrier thing with the big gun on it. Major damage, but not knocked out. 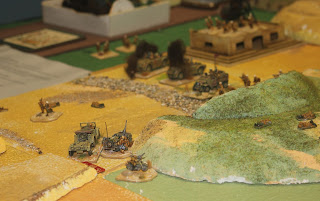 Over on the other side of the board the French were massing. The Italian Company Commander was looking a bit exposed, and we really didn't have much to bail him out with. 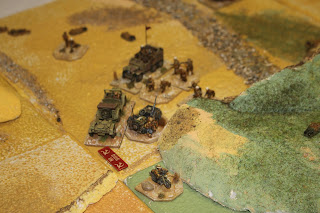 Especially when the enemy closest get enough APs to close assault. It doesn't take long for the defenders to be overwhelmed. Ignore the "Dug In" marker. It's a reminder the defenders were pinned. 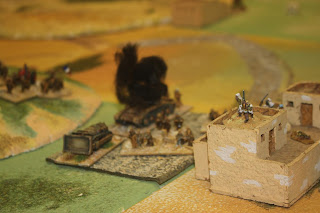 Two turns in and we FINALLY hit that bl**dy Crusader. 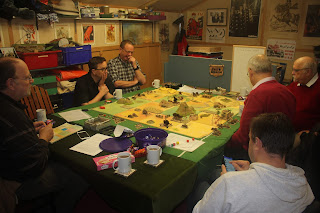 We had a big turnout for the game. There were 7 of us. Steve, Patrick and I took the Italians. Dave, Richard and Tim had the French. Phil was umpiring. 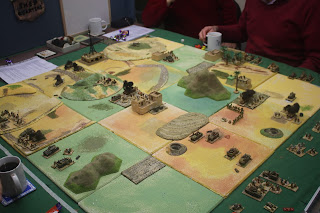 We finally got some proper reinforcements on, but the French were so far across the board we didn't have a lot of options. My pairs of trucks on the right kept up a steady fire, but never generated enough APs to dismount safely. 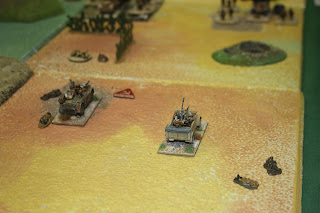 Then two of them had the crew killed, and were taken off. 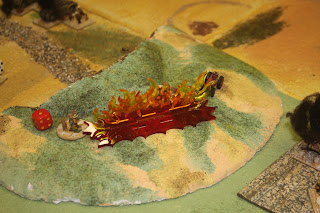 Then Steve got his infantry on, including a flamethrower. Despite his best efforts, and a spectacular acrylic game aid he did no damage with it. 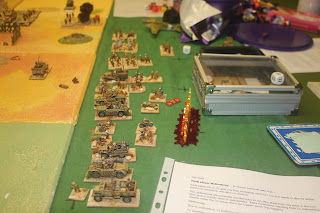 There were a lot of bases in the dead pile. 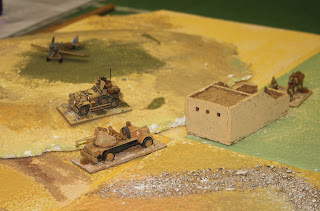 Then the French got even more stuff on. 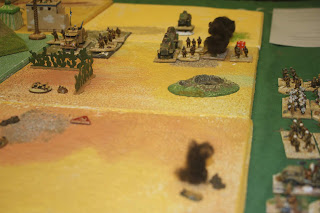 And my last truck ran away as the other one blew up.

We had failed to make much head way elsewhere. We did blow the Chasseurs D'Afrique out of the central building with HE, but too little, too late. We never really recovered from some mistakes in the first turn several weeks ago

Even with that said, it was a nice enough way to spends three evenings gaming. It all went a bit slower than expected, partly because there was a lot of kit flying about, but mainly as most people were learning the system, and with either two or three people aside things slow down.

A final note: Phil has been making amendments to PBI in small ways as he's gone along over the years. Each PC gets an automatic activation, and any activated unit gets +1APs, so it is less inclined to bog down and units can then do things too. He's toying with other ideas as well, as the vehicle HE v infantry rules are a bit poor too. I also like the idea that vehicles get a free 45 degree turn if they are moving.

Email ThisBlogThis!Share to TwitterShare to FacebookShare to Pinterest
Labels: PBI