Sooner than expected "To Ur is Human" is up on Amazon. I spent most of yesterday in frantic reading & re-reading the text and working on the page layout so everything appeared on the pages I wanted. I've placed an order for some author copies, so I'll have them at the Society of Ancients Conference if anyone is going. It was the lead time for printing that made yesterday the sort of final cut-off for finishing the edit.

It's not an enormous set of rules, - it's just over 30 pages, and the price has come in at a very reasonable £5. In a hark-back to the good old days the back cover doubles as a QRS.

You would not believe how awkward that was to do with Amazon's "Cover Creator". In the end I just did the whole damn lot as a single piece of artwork and dumped it over everything. 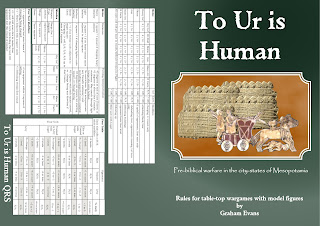 By the way, this version of the cover has at least one typo in the playsheet, - getting the tables in the book and those in the QRS in sync was a little bit trying.

I also had fun and games with the layout as I originally wrote and set it all up as A4, then discovered that wasn't one of Amazon's approved trim sizes for all of its market places, so it comes in as slightly smaller. Can't let deny Japanese and mid-Western American fan base access to my work, can I?

So, there it is, available now. I'm more nervous about releasing this into the wild than most other things I've published as they were only ever intended to be used in Shedquarters with a bunch of chums. Other things were mostly written with the intention of publication. In terms of style and content they are a half way house between rules that try to cover everything a player might do and the Neil Thomas style of what won't fit on 4 sides of paper won't bother us and leaving players to guess what is needed..

Wish me luck and place your order now. With the speed that author copies are shipped you'll probably get yours first.
Posted by Trebian at 16:22

Email ThisBlogThis!Share to TwitterShare to FacebookShare to Pinterest
Labels: Akkadians, ancient wargaming, Society of Ancients, Sumerians, To Ur is Human, wargames rules, wargaming