A Bit Chile on the Beach this evening

Having sort of said I'd publish my 1879 Pacific War rules, hot on the heels of "To Ur is Human", (or maybe not, - I've another book to write first) I thought it might be best to drag the rules out and play a few games with them. 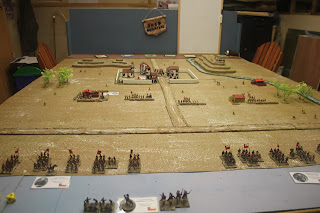 I decided to mix it up a bit and do a Chilean beach landing. The basic briefing was that, unable to force the main harbour at Lima, the Chileans had gone further north, and landed two divisions on a beach. That's the area between the blue bit and the coastal highway. The area is defended by a small, walled, town, protected by a couple of haciendas with hastily thrown up adobe walls, together with some improvised defences protecting the road. How the Chileans had managed to get two divisions ashore without being molested is a mystery to all of us. 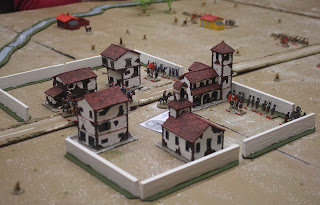 The small, walled, town was made up of European Spanish buildings and walls that once graced a Chinese walled garden. Peruvian buildings of the period tend to be not so tall on account of the earthquakes. But it still looks great. 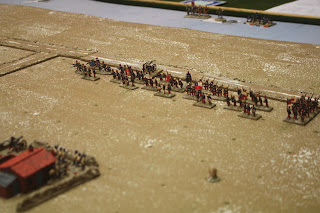 Tim surged up the beach and across the Esplanade. 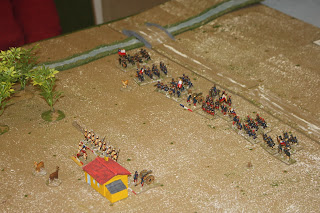 Richard did the same. 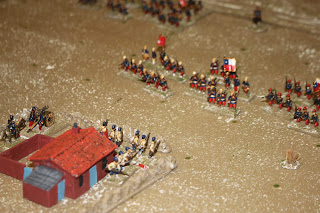 Tim deployed into Open Order, better to survive the rifle fire coming from the red hacienda. 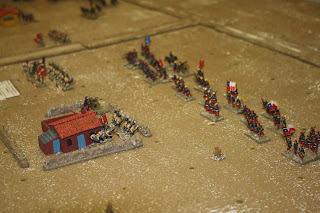 Tim was also threatening my centre. He was being hit by my defensive fire, but he came on like nothing was affecting him. 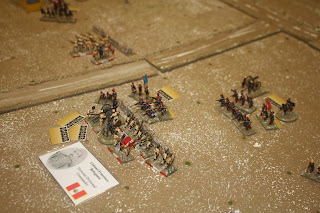 Braving the point blank artillery fire, Tim rushed the emplacement. The hand to hand over the adobe wall was brutal and hard fought. 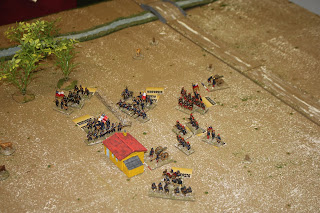 Richard drove off the infantry defending the yellow hacienda, but the Gatling Gun crew were made of sterner stuff. 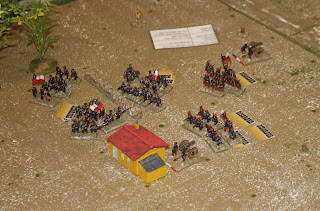 The Chileans are just unable to close, as the Gatling handles are turned, and the barrels glow red hot (query, - if you roll 3 x 1 on d8s, does that meant the Gatling has jammed???). 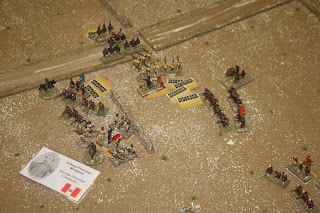 My artillery are overrun, and my other central battalion fails to deter its opponents with fire, and is driven back by an attack column. I fear equipping the defenders with the cheapest firearms money can buy might have been a false economy. 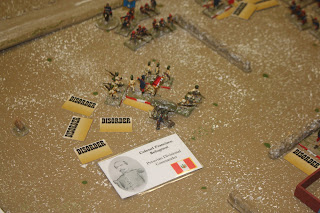 Disaster! The Peruvians are driven out of their defensive position, and brave Colonel Bolognesi is killed. 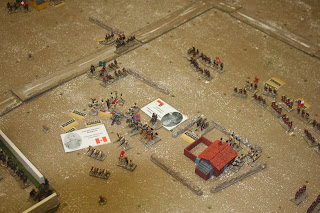 By now Phil had arrived, quite literally with the cavalry, and charged one of my other retiring units in the flank. 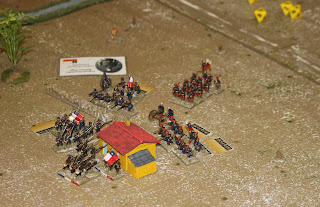 Finally the brave defenders of the yellow hacienda were overwhelmed from all sides and killed to a man at their Gatling Guns.

Pretty soon the defenders of the Red hacienda had suffered the same fate, and it was all up for the Peruvians.

Quite a handy introduction to the players, and a good work out for the changes I made after the last game. I did a lot of work on the defence and attacking of buildings and that is shaping up nicely. I also made notes elsewhere in places where the text wasn't as clear as I would have liked. Most of the wording will need a complete re-write when I go to publish, taking out my truncated sentences and abbreviated wording.