Not knowing which half

The success of "To Ur is Human" has come as some surprise. Okay, so it isn't a runaway best seller, and no longer troubles the Amazon Top 10s of anything, but it has sold more than the half dozen I expected to shift to wargaming friends, and the numbers are now at a level where there MUST be people who I have never met who have bought a set. 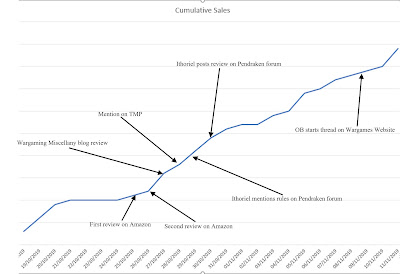 I've been tracking Amazon sales against known events in the outside world, and it looks like I get flurries of activity after someone posts something, but it's hard to tell, as there's obviously a lag between posting, reading and ordering. So I don't really know what has an effect or when.

To compound my confusion I've decided to run $5 of banner advertising on TMP (keep an eye out for it, - that's it at the top). So far about 25% of sales have been in the US, with the rest being UK & 1 copy bought in Germany, but I reckon it'll be worth the investment as it means I can also post on Hobby News, if I understand things correctly, which appears on the front page. The banner will have a direct link through to the new "Wargaming for Grown-Ups" blog page with details of the rules and how to order. As I can monitor page hits, I should be able to track how many people click through, broadly speaking. It is fair to say, love it or hate it, I find that if I get a blog post mentioned on TMP I get loads more traffic than I do from anywhere else.

As I checked on the internet for reviews on forums I don't currently follow, something odd came up. The rules are available on the Japanese version of ebay, from a UK seller called "bonzer bloke". I kid you not, have a look below: 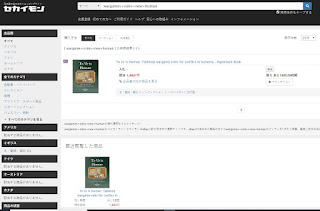 Now this is right bizarre, honestly. And he's charging twice what you'd pay on Amazon.co.jp. I know 'cos I checked. 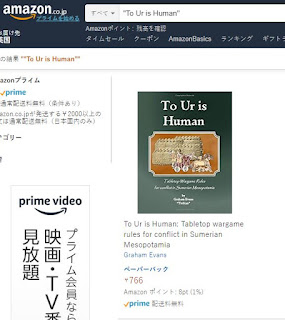 Not that this affects me, unless he's bought a copy and has worked out a way to bootleg them already. I mean, if he's waiting for orders, then shipping them in form Amazon before selling on, I think that's okay by me.

Just if you are one of my Japanese followers, I'd recommend you just go straight to the Amazon Japan website.

BTW The title for this piece is taken from a quote by a Nineteenth century Philadelphia retailer John Wanamaker who supposedly said “Half the money I spend on advertising is wasted; the trouble is I don't know which half.”

Email ThisBlogThis!Share to TwitterShare to FacebookShare to Pinterest
Labels: To Ur is Human