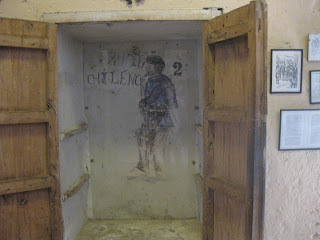 I have been beavering away at turning my brief rule notes for the 1879 Pacific War into a full set of rules over the last two weeks, and I'm making progress.

I've even been back through my holiday photos and found the one that started this all off.

Compared with working up "To Ur is Human" this is a lot more work. The rules are more complicated. 19th century warfare is more complicated by its very nature, partly because there's a lot more technology and partly because we know a lot more about what happened, so there's more detail to process. I can't really say "We just don't know, - here's my guess" anymore. I have to incorporate what we do know into the system in a workable way (having said that I know that some popular rule sets just bang in what looks right and have done with it).

And there's a lot more to be precise about. Firing ranges are longer, for example, so arcs of fire need to be properly explained. What I'm finding is that the brief half page or even short paragraph that enables me to run the game won't work out in the wild. It's quite clear as I work through examples and draw diagrams and so on that I do a number of things in a game setting that aren't immediately obvious. So 700 words in three or four paragraphs covering movement and terrain effects ends up being 2000 words over 6 pages, including diagrams. I thought that the text would be sorted by now, but I'm only about 2/3rds of the way through the mechanisms, and there's a whole load of stuff to do on why the war was fought, basics about the combatants and a chronology, and some re-fight scenarios to tidy up and include. So, quite a way to go yet.

It has lead me to wonder about including the naval rules as well. I know some of you have said adding naval rules will make the publication a "must buy". My problem is that I was going to go with the rules I used in a blog post just over a week ago. Now they gave a good enough game, but they are based on a set for larger fleet actions, and the Pacific War sea battles are more like skirmish wargames with a maximum of 3 or 4 ships aside. They might be fun, but they aren't what's going on in the late 19th century off the coast of Peru & Chile.

I'm also of the view that I need a lot more colour/chrome in them. I'm looking at ship control panels for each vessel, and a random event/critical hit system that looks more like the "File Leader" officer incident tables. This means that I'm not looking at the four page appendix that I first thought, but a fully fledged naval supplement. I reckon that it would be about the size of "To Ur is Human", and so would be about a fiver, whilst the land rules will be at least twice that. It is also several months of development work to get it all right, so that'll delay the launch of "It's Getting a bit Chile" until next summer, I would guess. And I think the naval war is sufficiently important that it shouldn't be tucked away as an after thought.

I don't need to make a decision yet, as I'm still working on the basics, as I've said above, and maybe the full design will come to me quite quickly and will fly through playtesting with no problems.