July 31, 2020
Lockdown has driven me a bit wargame crazy. As I observed in my last post I don't get on with solo wargaming as much as some people do. However, I noticed some light somewhere in the tunnel. This week we'd have some nice weather, and I have a large gazebo, AND some foldable tables. The latest guidance/rules allow for six people outdoors with a bit of distancing. What did the Quarterly Group think? 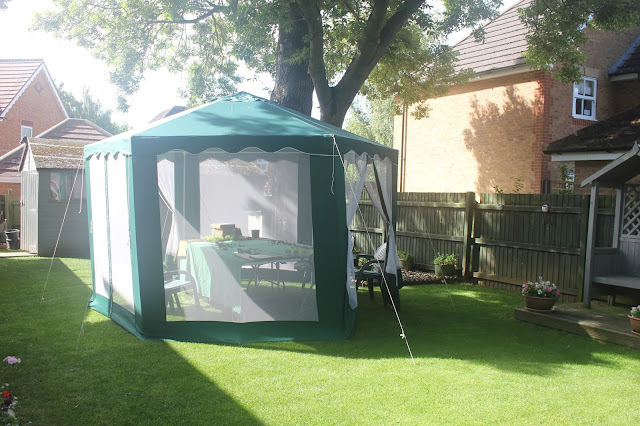 The Quarterly Group thought that sounded great, except for Gary who is locked down near Leicester. So, up went the gazebo, and out came the toys. 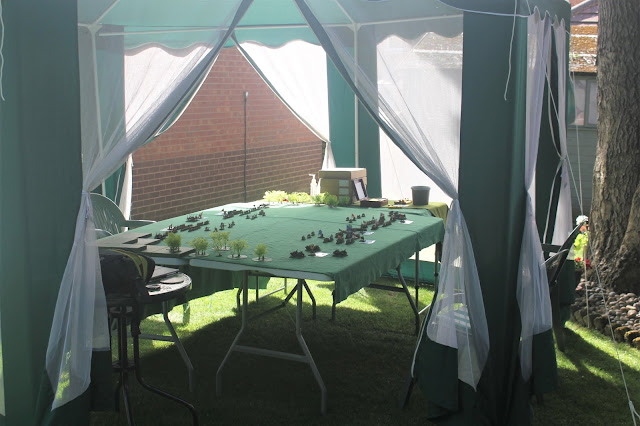 This was exceptionally good news for me, as it meant that I could get in a proper Taiping Era play test, as I've done a lot more writing than testing than usually happens. By now I should have been testing every other Tuesday night, if not more frequently, with perhaps a COW session as well. Consequently I  have lost a little of the feel for how it all hangs together. 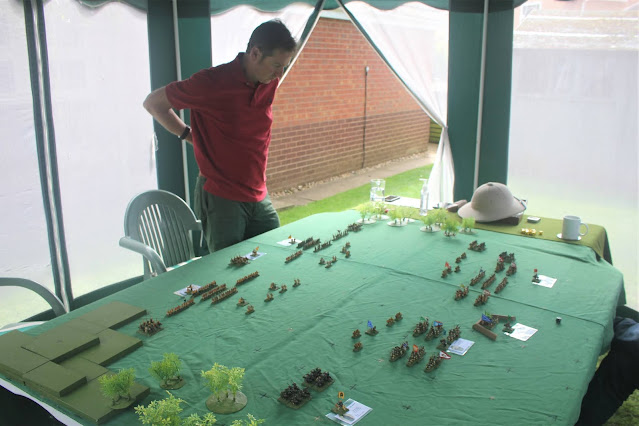 This group have mostly played Westerners against Imperialists, or EVA against Taipings previously, so I went for Taipings against Imperialists, as that should be the core of what really works under these rules. The Taipings, outnumbered but up for it, are on the left. The Imperialists, a bit more diffident but with some Mongols prepared to mix it up are on the right. Richard (standing) and Phil took the rebels, Chris and I took the Imps. I got the wing with the Mongols. 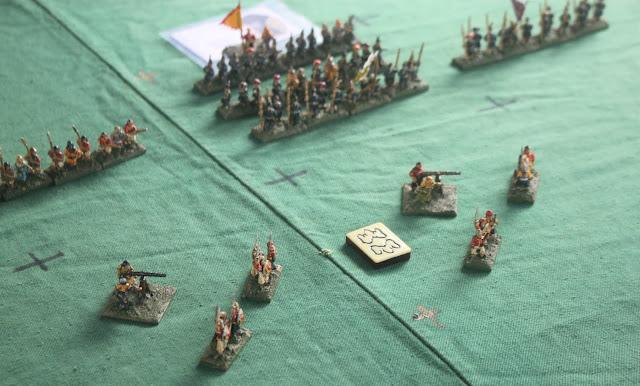 There was a bit of shooting in the middle, by our artillery, and we managed to ding their skirmisher screen. Open order infantry can deploy across two squares. No one does this if I let the players set the toys up, so I put them out like this and left them to it. 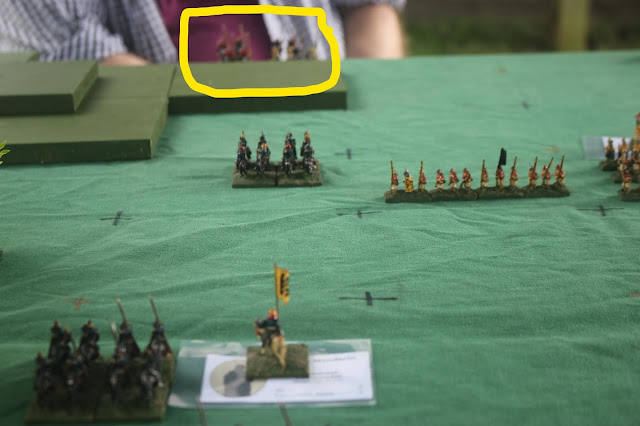 In a blink of an eye I launched a charge against the Taiping cavalry on my wing. They immediately evaded - you can see them circled in yellow at the back, out of focus and nearly off the table. My charge got a bit raggedy, as one of my units decided not to bother, despite the imprecations of their Mandarin. 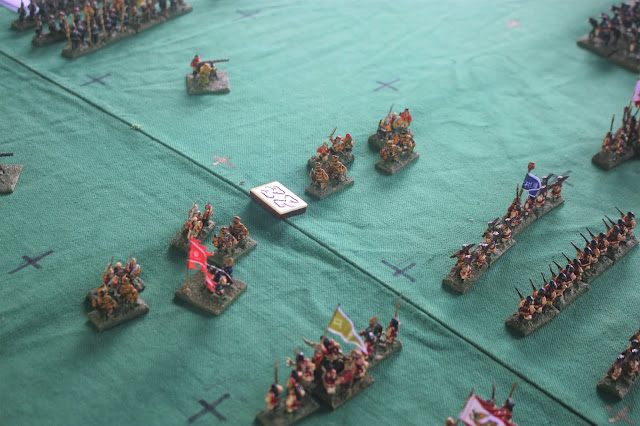 In the centre the opposing skirmishers got stuck in to one another. We had Tiger Men, so what could possibly go wrong? 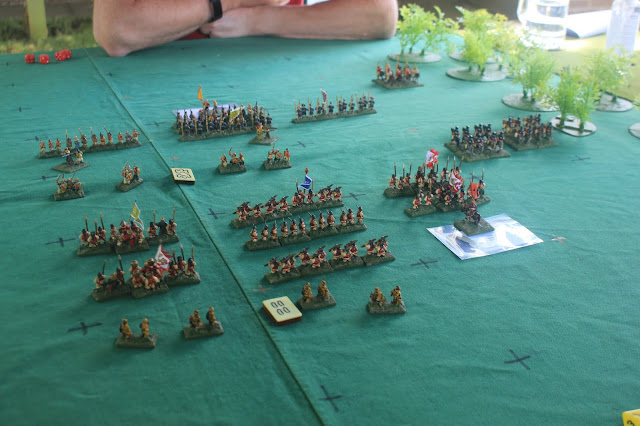 Well, quite a bit, of course, as they take a hit and are forced to retire back behind our right hand main body. 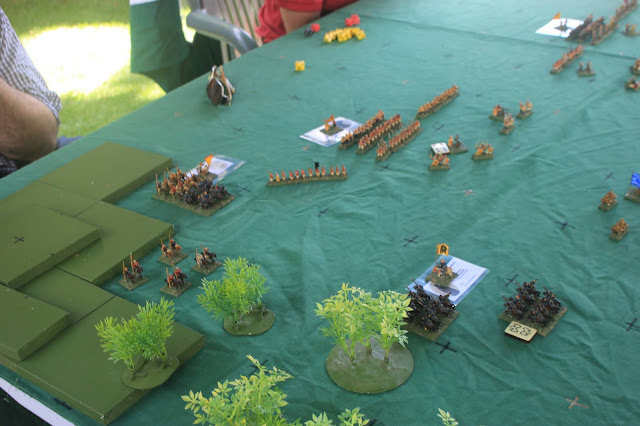 Over on my flank Richard committed his cavalry reserve to stop my Mongols running riot in his rear. This enabled Phil to bring back his unit which had evaded. One of my Mongol bands took a hit from their jingal in the centre. 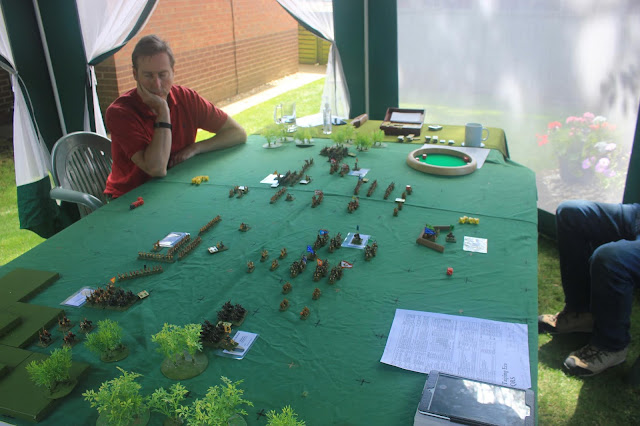 Richard's reserve cavalry beat my Mongols and pushed them back. 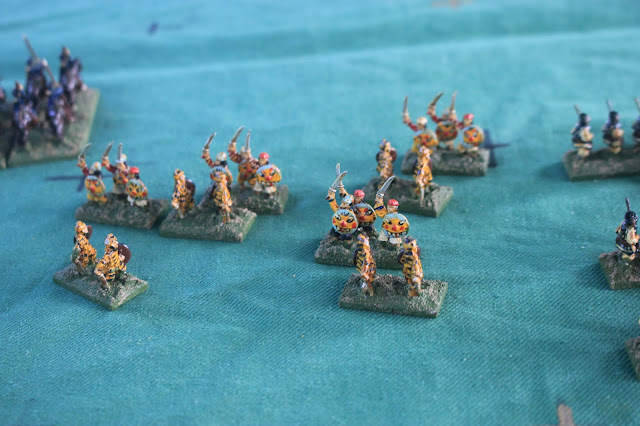 The other opposing skirmishers get into it as well. This is unimportant, as they have fulfilled their function of screening the main body from jingal and musket fire. 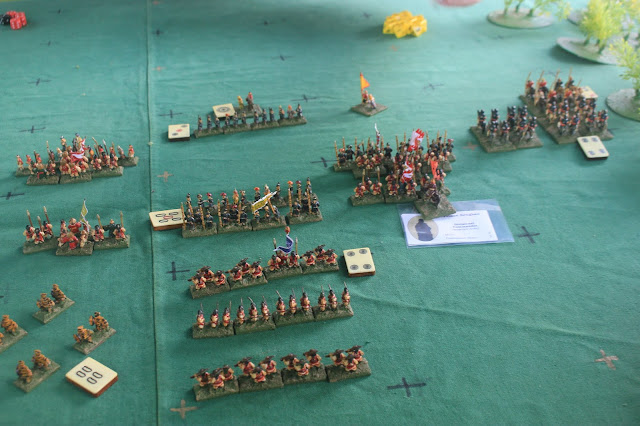 As the Taiping's Maio Allies (in grey) press forward they are met by the massed fire of several yings from the Firearms Division of the Banner Army. Much damage is inflicted upon them. 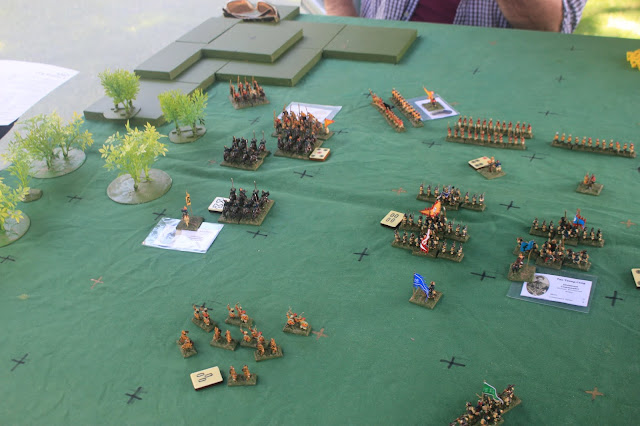 Over on my wing I pressed forwards with my cavalry to force a breakthrough on the flank. Phil was shifting infantry across to shore up his position should I prevail. 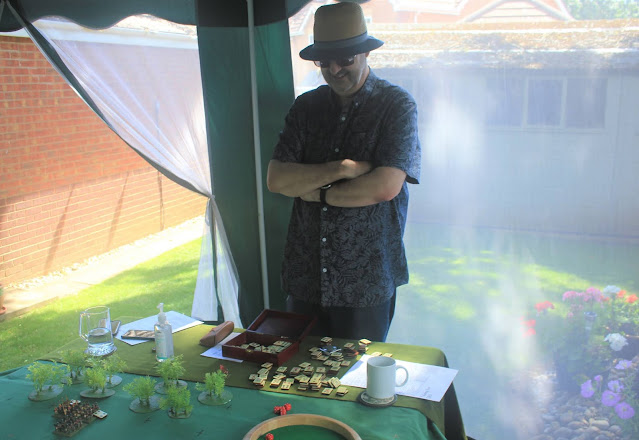 Chris had taken charge of the mah-jong box tile distribution. 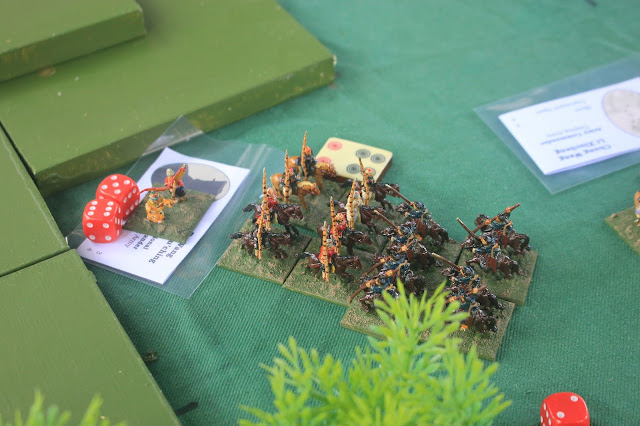 The Fu Wang lead his reformed cavalry back in a charge on my Mongols. It held up my onslaught... 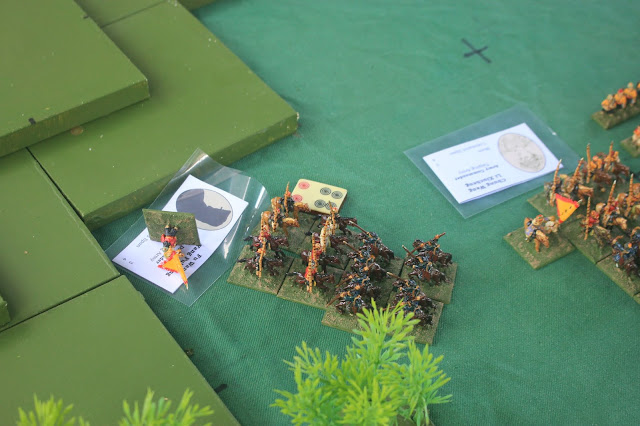 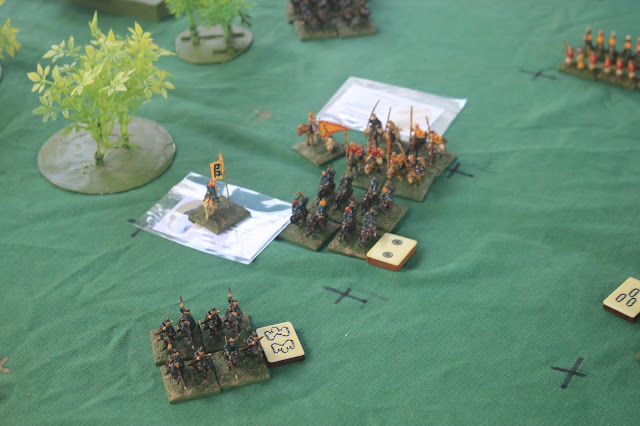 Meanwhile, Prince Li the Chung Wang was leading his men in pushing back my Mongols. 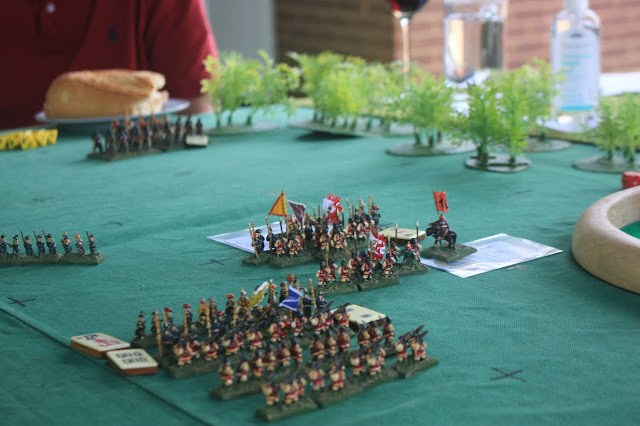 The Maio press in on the Fire Arms division. Ignore what appears to be a baguette and glass of wine in the background. I can assure you this game took place in England, not France. 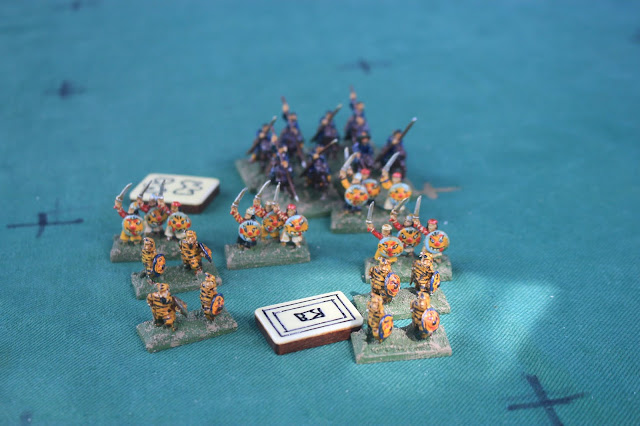 My Tiger Men had been given a kicking by the Taiping sword and buckler men. So much so, in fact, I was forced to send a unit of Mongol horse to ride them down. 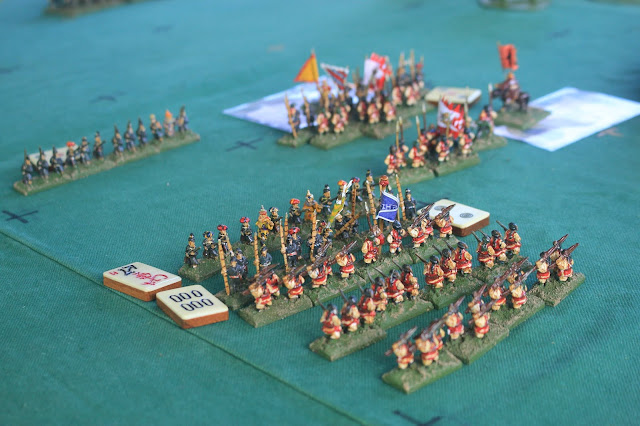 The first line of musketeers have taken a pasting from the rebels. Perhaps these gunpowder weapons from the West are not the future, after all? 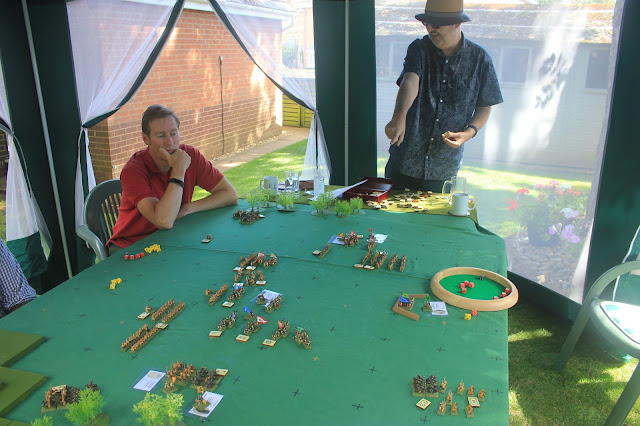 Chris quickly points out to Richard what he has been doing wrong all this time. 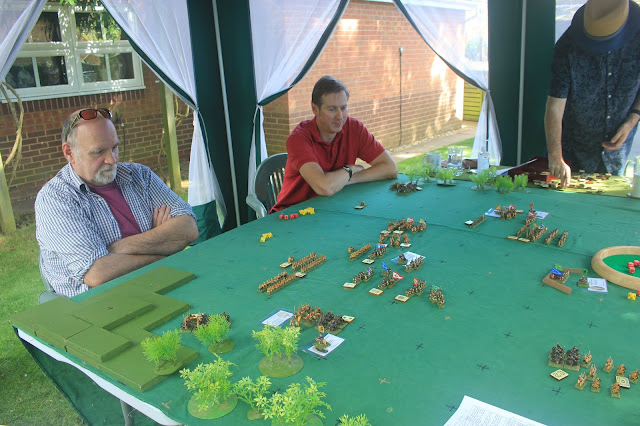 Not withstanding Chris' taunts, Phil and Richard look pretty pleased with their progress. 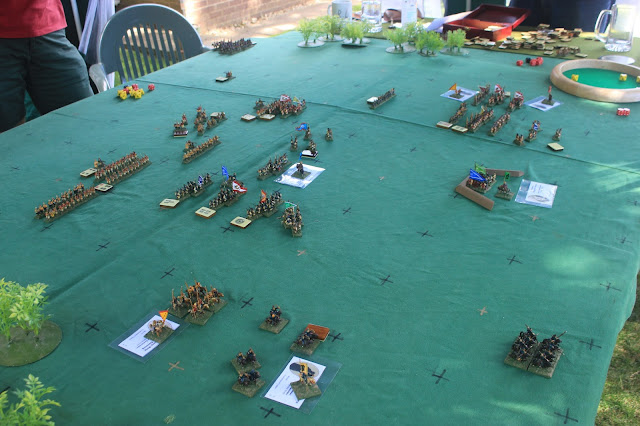 Things suddenly aren't going well for me. Prince Li has broken one of my cavalry units, and my infantry have all suffered from musketry and jingal fire. 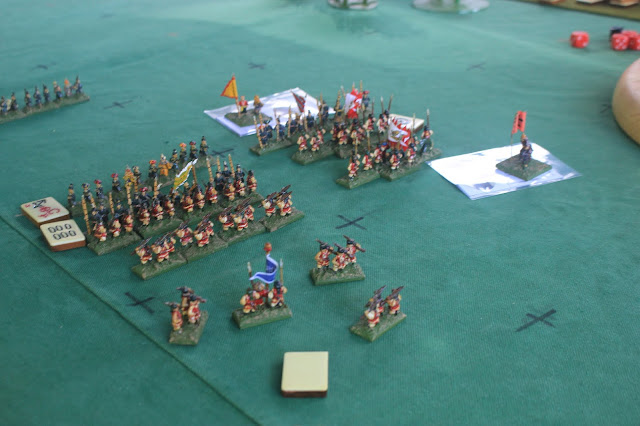 On Chris' flank one of his firearms yings turns and flees. The emperor will be displeased - if anyone deigns to tell him. 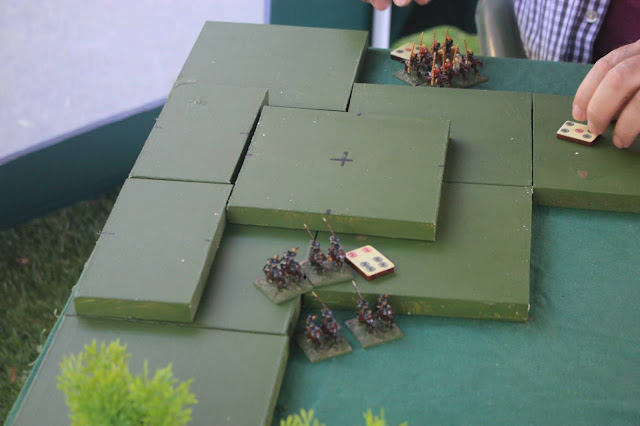 I do finally break a Taiping cavalry unit on my left, chasing them into the hills. 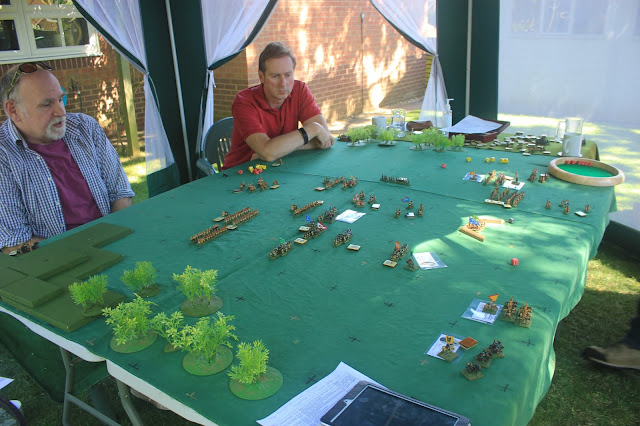 However, as you can see most of our stuff is now going backwards rather than forwards. 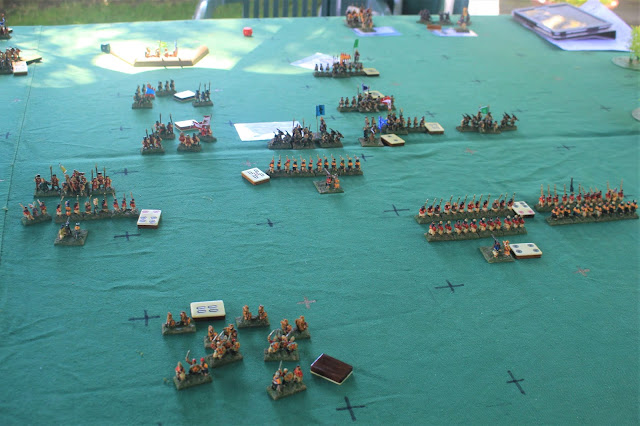 So, as our final unit of Tiger Men are chased off the table, it is clear that we have lost the day, and the Taiping Rebels surge on towards Peking.

A very satisfactory game and play test. It is true that we were all a bit rusty, and decision making was slower than normal. I was really rusty with the rules, despite my earlier solo game, but I think everyone ended up happy.

The massed, multiple units in squares worked well, and having less firepower than is normal when you have Western forces about made it a more close up and brutal game. Luckily for me the core system held up really well, and there were only some items of detail and clarification required. I had the full rule book on my tablet, but I have to say I prefer having a printed rule book when I need to look things up.

Enough of game one. What did Richard have for us?