August 26, 2020
The largest battle of the 1860 campaign in China was the attack on the bridge at Palikao on the 21st September. Here the British and French forces met the might of the Qing Empire, with Mongols, Manchus, Green Standard and Bannermen in abundance. It was a stunning success for the Europeans, and the French commander, General Montauban, was created the Count of Palikao by Napoleon III afterwards.

The documentation for the battle is a bit all over the place, but I reckoned I had enough to give it a go. I had two issues. I probably didn't have enough in the way of Mongol Cavalry, and I probably needed the entire length of my table, plus a bit more, and I was alas using the far end to store Battlefield Society literature.

Even so, I think I made a decent fist of it. The Allies are marching along the length of a canal, leading up to Palikao Bridge, with the French closest to the canal. The British are off to their left. The French are to engage the centre and left of the Chinese position whilst the British turn their right flank, being in possession of the only battlefield cavalry the expedition has. The frontage of the battle was about 3 miles, with the Chinese holding three villages. The area was also wooded. In the end I was unable to find a good map of the area, so I made a number of guesses. 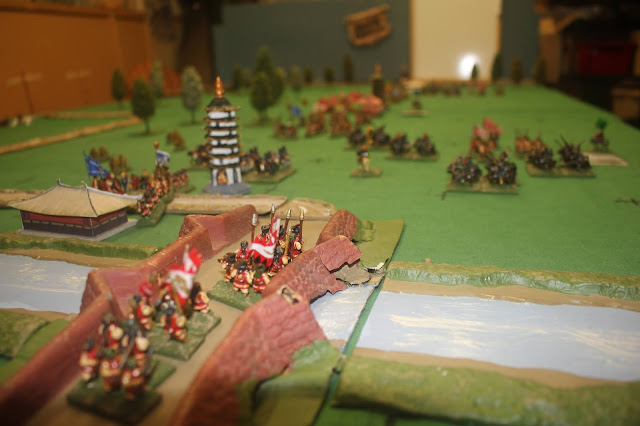 My Bellona bridge stood in for the eponymous bridge of the battle. It needs some repair work. It is occupied by some Imperial Guard Banner troops. 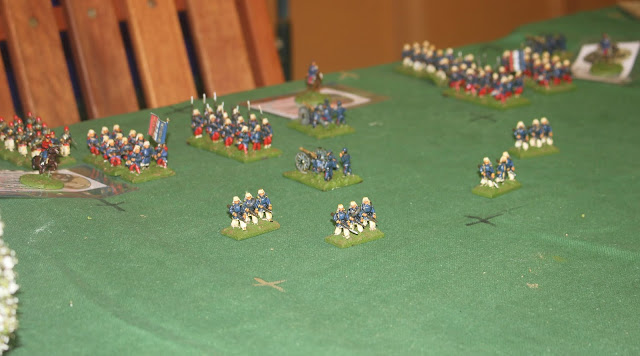 This is the French corps advancing onto the table. In the actual battle the French commander sent forward half his Chasseurs, together with the voltiguer companies from his line battalions, and merged the rest of the Chasseurs into the line regiments to bring them up to strength. I just deployed the Chasseurs in open order to get the same effect. 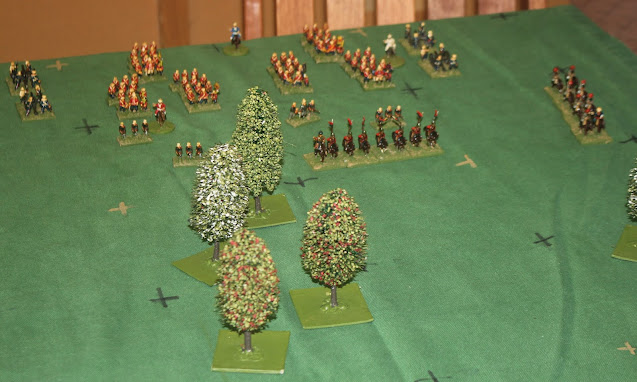 Over on the left you can see the British, with Probyn's Horse in the centre, and Fane's on the right of the picture. 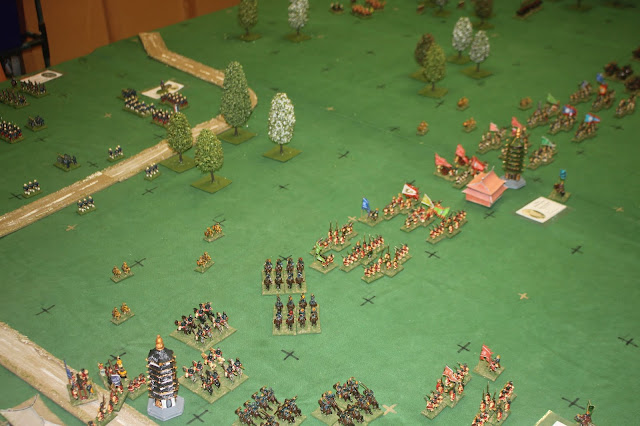 As the French advanced, the Chinese commander diverted some of his horse to support the centre. 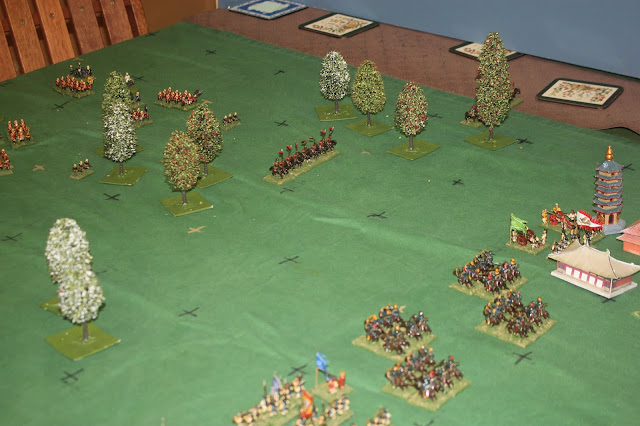 Although heavily outnumbered, the Indian "Irregular" cavalry advanced. I put irregular in inverted commas, as they seem to fight like line cavalry in this engagement. 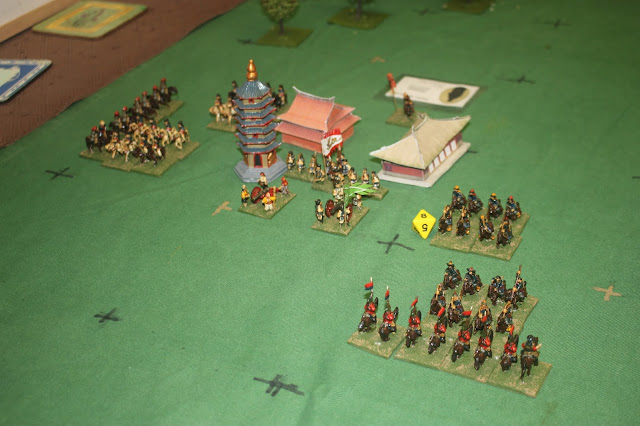 As I'm soloing this I some times forget to take pictures. Fane's horse have managed to charge some Manchu cavalry in the flank. Probyn's have been charged by the Mongol horse, but one of their units refuses to charge home (I've left the dice they rolled to pass their "Moral Vigour" (MV) test next to them as a reminder they can't be moved). 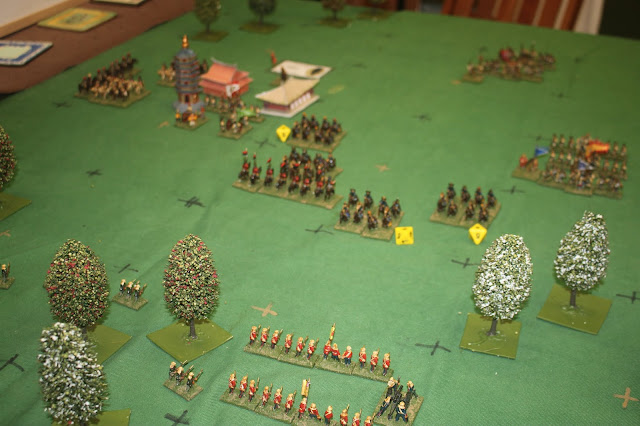 In fact it is a bit of a bust for the Mongols on this flank, as the other two units refuse to charge the British infantry advancing in line towards them. 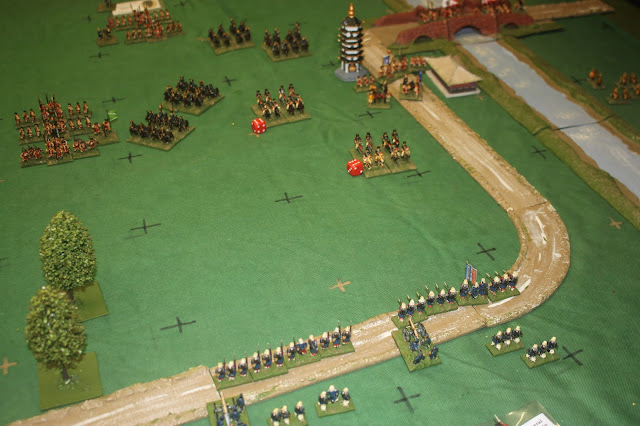 The Manchu horse facing the French were also a bit leery of charging. Things weren't going well with the Chinese. 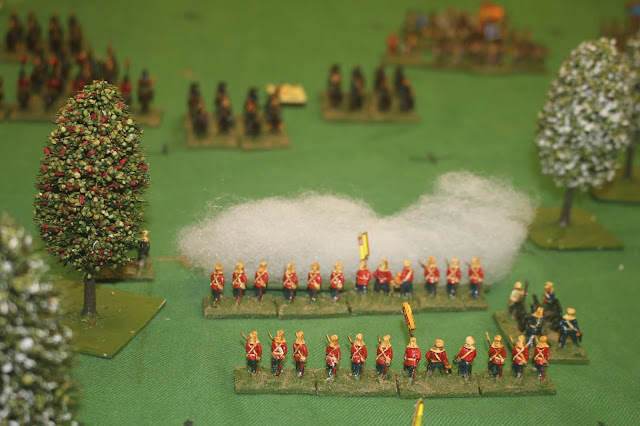 The British foot opened fire on the Mongol horse that initially wouldn't charge. As I was losing track of who'd done what I deployed some of my smoke markers from my WSS game. 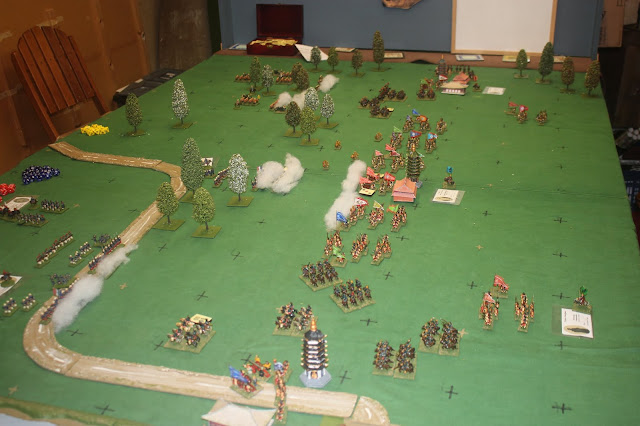 Firing had broken out all along the frontage. The Europeans were getting the better of the duel. 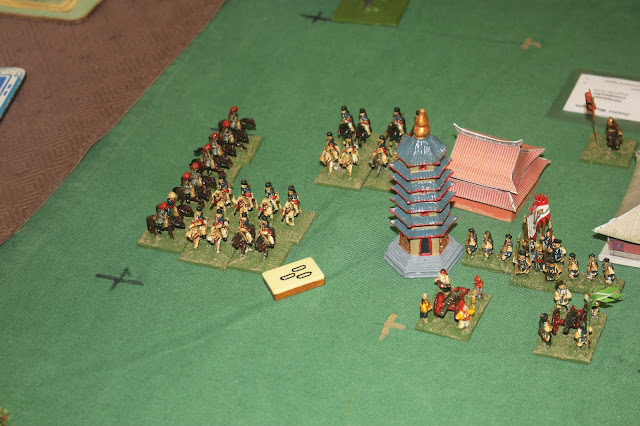 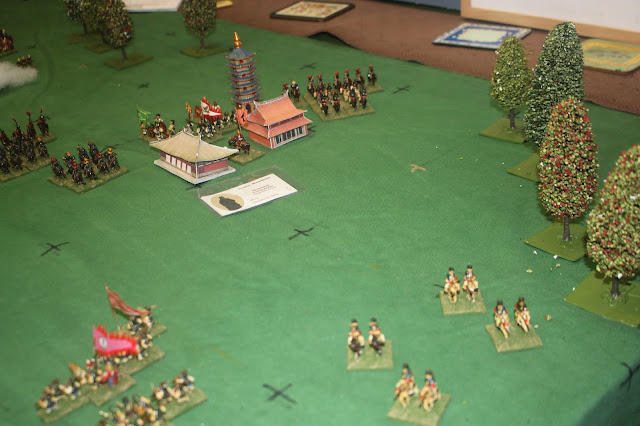 A cascade of disastrous MV tests means they break and flee, but their colleagues pass their test and stand. 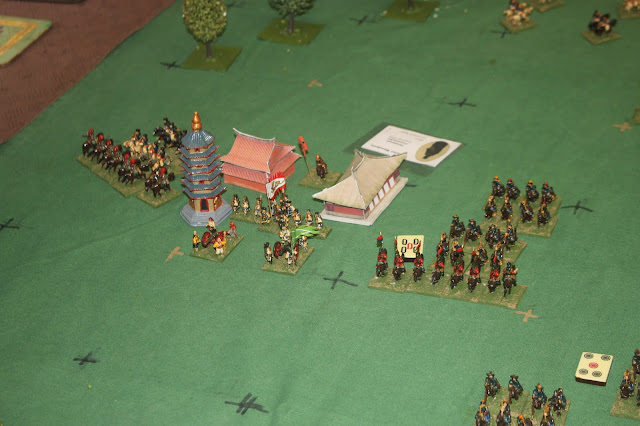 Probyn's are finding the Mongols a tougher prospect. Although they lose the close combat, they are braced in position by the supporting unit. 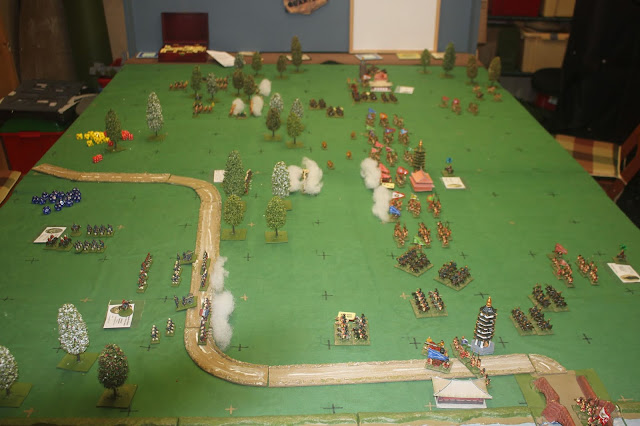 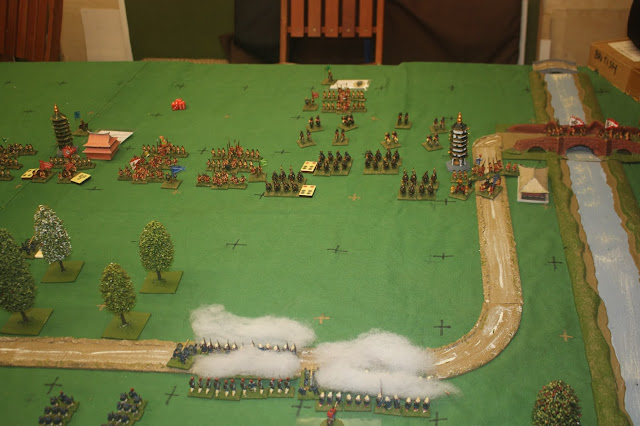 More volleys from the French infantry repel their mounted opponents. Historically the French were forced to form square, although some troops survived by lining the ditch at the side of the road. The French also did considerable damage with their artillery firing canister or grape shot. This is one of the places where I may not have got things completely right, in that it was too easy, both here and on the left flank, to deploy in line with flanks secured. Then, with rifles, develop sufficiently heavy fire to repel the cavalry. I don't have a problem with rifles shooting off cavalry, even pre breach loaders, but the inability of the cavalry to flank the position is a problem with the layout. 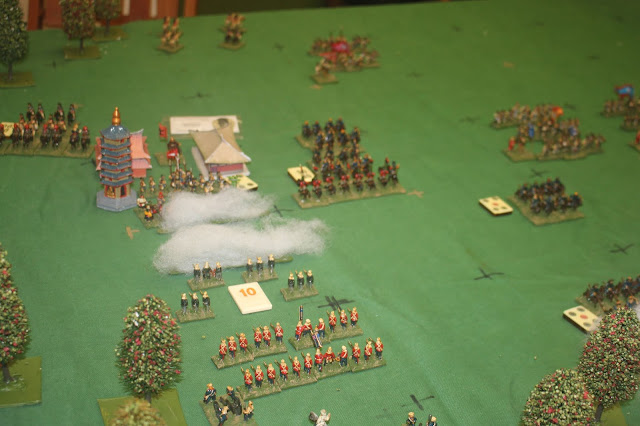 With their cavalry driving back their opponents, the British infantry closed on the infantry and guns defending the village. The 60th Rifles performed excellent service as a skirmisher screen. 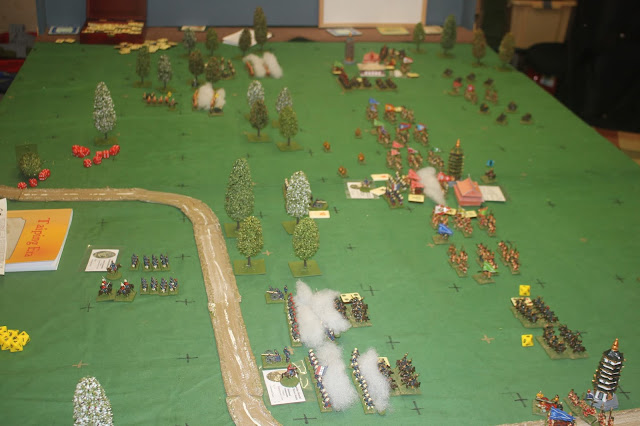 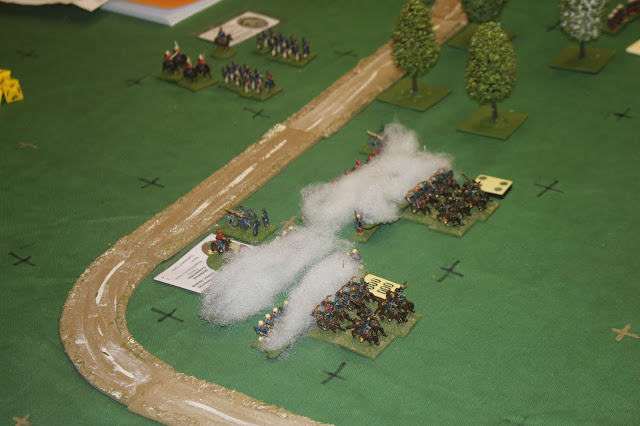 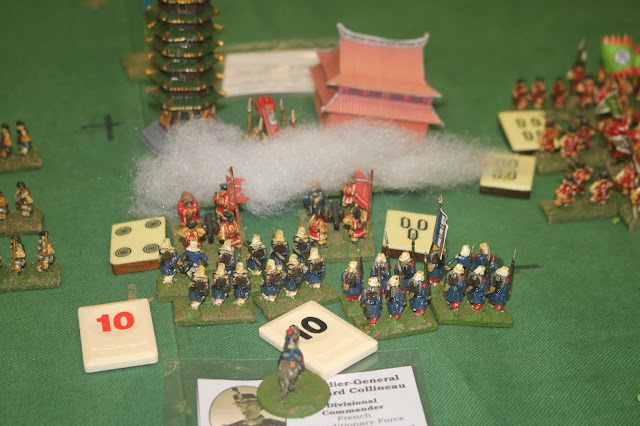 In Attack Column the French infantry press home their charge on the village in the face of artillery fire and musketry. 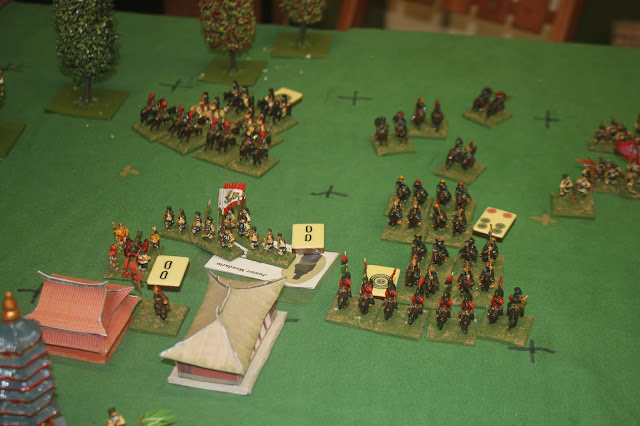 The Chinese right is crumbling, as Fane's horse continue to press home their advantage, and Probyn's drive their opponents back. 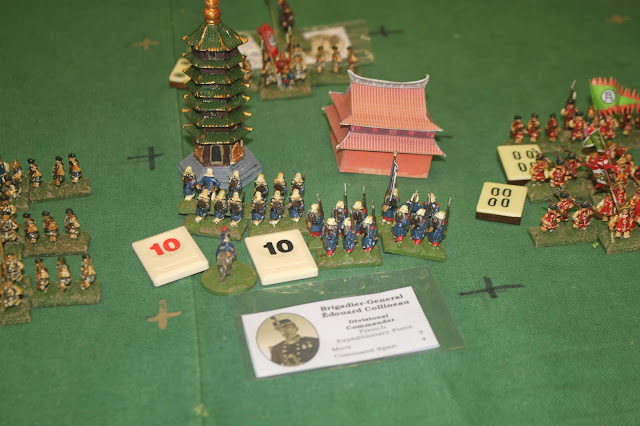 The French capture the village in the centre. Many cheers of "Vive l'Empereur" and "Vive la France". 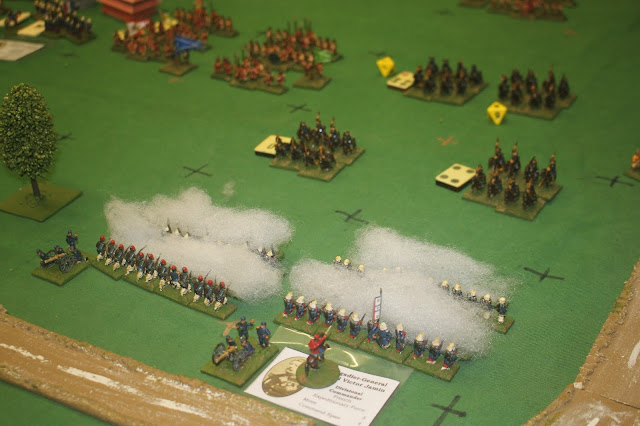 The Mongol cavalry is driven off by the French on the right. 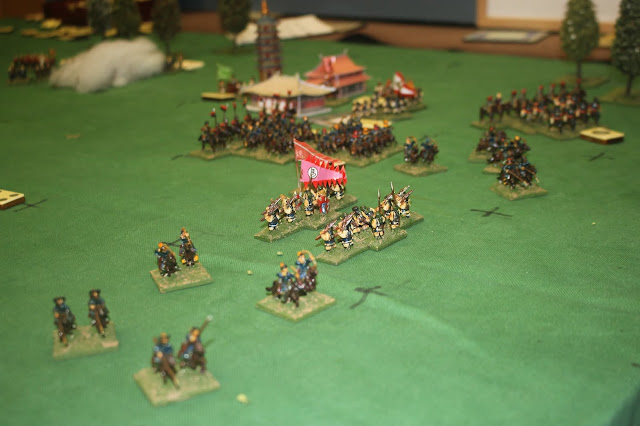 Whilst over on the left more and more of the Mongol horse starts to leave the field.

I hasn't finished by the time I wanted to stop for the evening. I'd been at it for 2 hours, excluding set up time, and that's more than enough of my own company for me to endure. I'm really pleased at how much has happened in two hours, with me moving all the bits and with lots of figures and terrain on the table. I will hopefully find time to go back and finish off the game.

The issues with the game were in the set up, the rules performing admirably. It is hard to see how the Chinese can win. Their defensive position is deep, but it is not tremendously strong. They really need good strong walls and ditches, and massed artillery. Either that or a lot of space to develop the use of their cavalry. In any event, the technical advantage that the Europeans have with the modern (for the time) rifle - the British are using the Enfield - means that they can engage the enemy at range and cause a lot of damage before closing. They didn't even need to deploy the Armstrong guns. Or at least, not so far.

For those of you who don't own them yet, the rules are available from Amazon and Wargame Vault, for the very reasonable £14.99. Go on, treat yourself.