I'm working my way through my back log of plastic figures at the moment. I found a box of Hat Hoplites, and as you can never have too many hoplites they were next on the list.

The last time I painted any hoplites was a while a go. At that time I was using metal florists' wire to make spears. I experimented with hammering the end flat and then filing it into a point, but honestly it was too much like hard work. My hoplites (and phalangites too) are therefore armed with what looks like, on close inspection, to be 8 foot barge poles.

Since then I have moved over to using the plastic bristles from a yard broom. That's a stiff broom, not a soft one. The diameter of the bristles is the same as the wire I was using, and they take paint just as well.

Handily they come pre-cut to a standard length, which is useful. You just need to snip them off of the broom head when you use them. I use wire cutters for that - easier than a knife - but recently I found it easy to cut off a whole block using a mini tool with a rotary cutting disc. 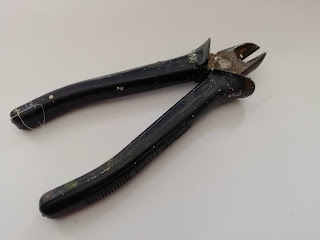 When I first started using these I just did the same as I did with the florists wire. This time round, however, I experimented with a bit of modelling on the tips.

I tried this out with the standards on my recent WSS paintjobs. It is really simplicity itself to produce viable looking spearpoints.

All I did was take a pair of pliers and simply squeeze the end flat. Unfortunately this leaves them with a slightly ridged surface, depending on the gripping marks on your pliers. I tried using a vice with a flat covering of the jaws, but it was too fiddly, and in any event, it turns out once you paint them you can't really tell.

Anyhow, once you have squeezed them flat use a pair of nail clippers to snip off the sides to make a point. The curved edge of the clippers gives a leaf shape to the spear point.

And that's it. The work of seconds to produce fairly decent looking spears with spearpoints. This will be my chosen method going forwards, but I don't think I'll go back and replace the original barge poles. At least, not any time soon.