This Tuesday's game was a step up in the level of complexity, moving from a simple 1d6 system to a refight of Maharajpur using the Indian Mutiny supplement for my "Taiping Era" rules. 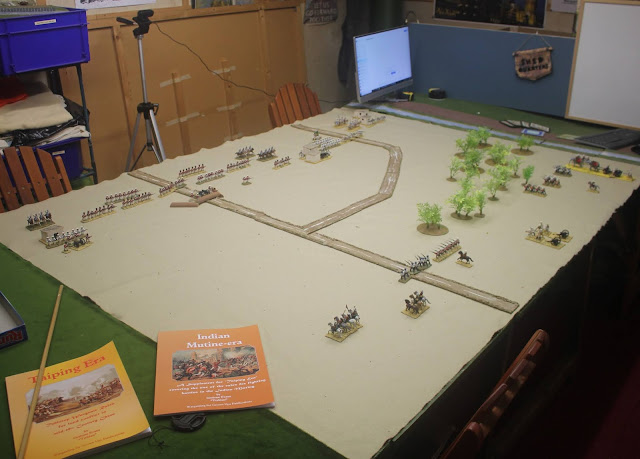 Not knowing how many players were going to dial in (we're using Skype) I put the figures out, and set the camera up behind the mutineers, as this gave the best all round coverage (and is also closest to the electrical outlet for the PC). In the Mutineer set up the Sepoy forces cover their right flank - left of the picture - and the Nana Saheb's palace troops the left flank. I'd painted up a Nana Saheb figure and flag bearer especially for this game. They occupy a strong position, with guns emplaced in villages and a battery dug in on the main road. The British deploy with a small force on their left, under Major Stephenson, and the rest under General Havelock on the right, concealed by the trees. Havelock's plan was to outflank the mutineer position on his wing, then roll the line up. 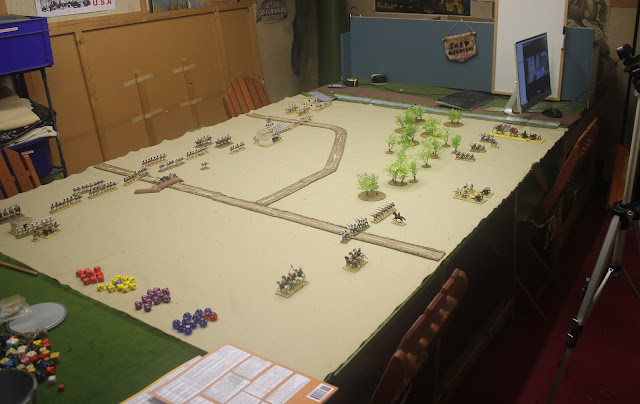 Once Richard and Steve had dialled in, with no other players it was easiest if I played the Mutineers and they split the British, so I shifted the camera to the other side of the table. 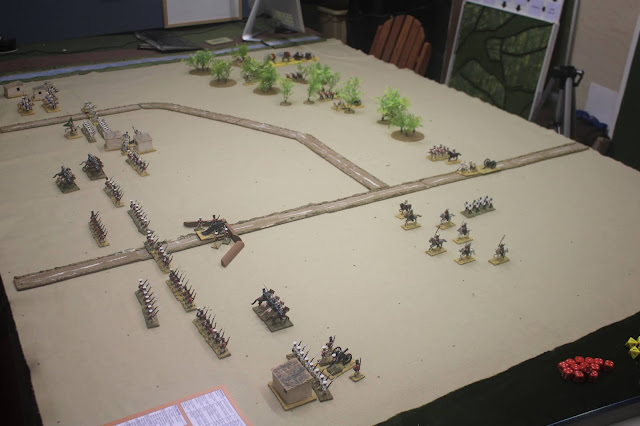 Steve adopted an aggressive approach to keep the Sepoys pinned whilst Richard worked his way through the trees. 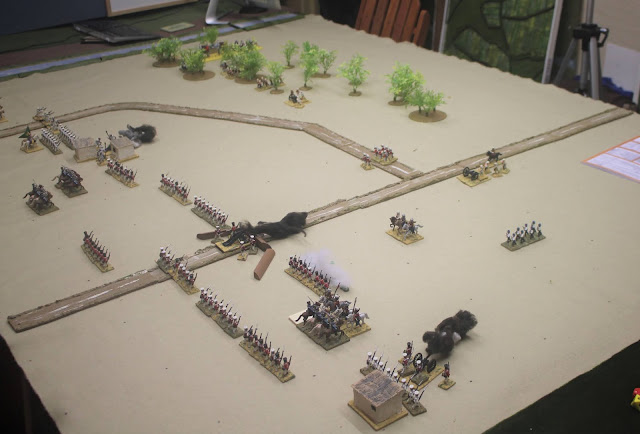 Soon Steve was well stuck in, charging in with his Irregular horse, and driving back the Sepoy Cavalry in his way. The Sepoy artillery opened up, but was initially ineffective. 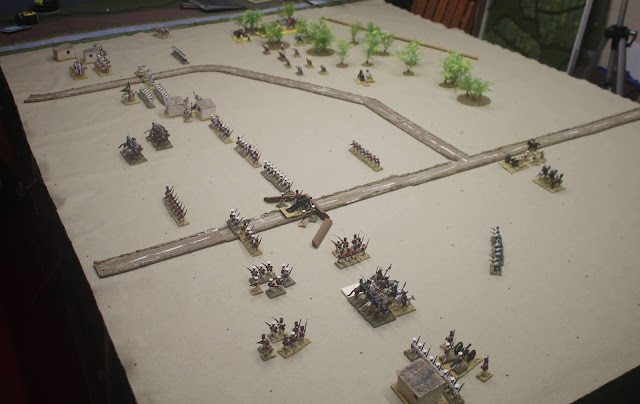 Steve deployed his infantry into line to develop his fire power, and unlimbered his artillery, as Richard's men emerged from the woods in Open Order. 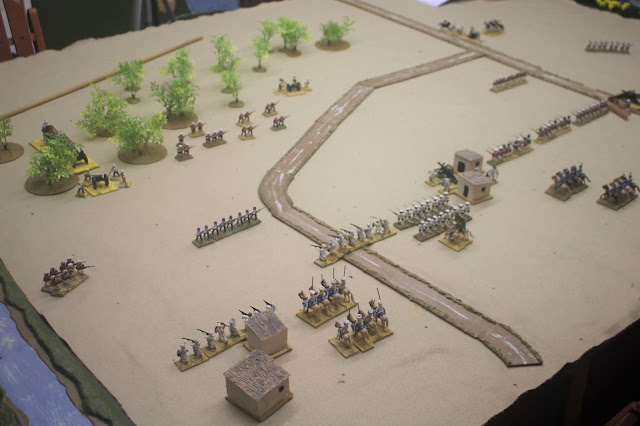 Richard had deployed the "Elephant Gun" and pushed his Sikhs wide, into an attack column, whilst forming up his Madras Fusiliers with Enfield Rifles in order to give his opponents a few volleys before closing with the bayonet.

It was all kicking off now, with everyone firing who could. Some unexpected firing from the Palace Troops and their matchlocks gave the Fusiliers a momentary check, although they (supported by accurate sniping from the Open Order Highlanders) inflicted a lot of hits on the infantry in the open. 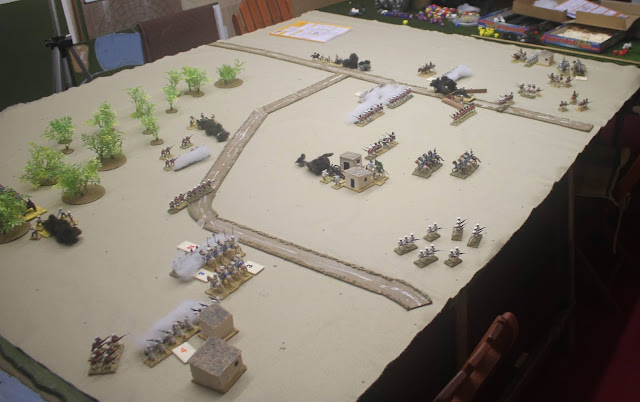 The Sikhs were ordered to charge the village, but decided not too immediately, much to Richard's chagrin. The Palace Cavalry launched a charge at the Fusiliers, who stood their ground and delivered a withering volley, as some of the Palace Infantry started to stream to the rear.

The Palace Cavalry were repulsed in a brief action. BTW You can now see Nana Saheb and his standard bearer directing fire from the village.

On the other wing, the Irregular Horse has chased the Sepoys off, but the second battalion of Madras Fusiliers have got themselves bogged down in front of the guns, and simply can't advance. They're taking a lot of damage from the close range artillery fire. The Sikhs on their right are being taken on by two Sepoy battalions, and are finding it hard going. Can Steve hold on whilst Richard breaks the other wing?

The Sikhs and Sepoys charge each other, but retire after an inconclusive round of combat. This gives them some much needed breathing space. The Fusiliers on the left are still unable to advance, and now have got in a firefight with some Sepoys. On the far side, the Palace Cavalry has started to break and retire. The Sikhs finally charged in, and cleared the village. The Sepoy cavalry that remained headed off to shore up that flank. 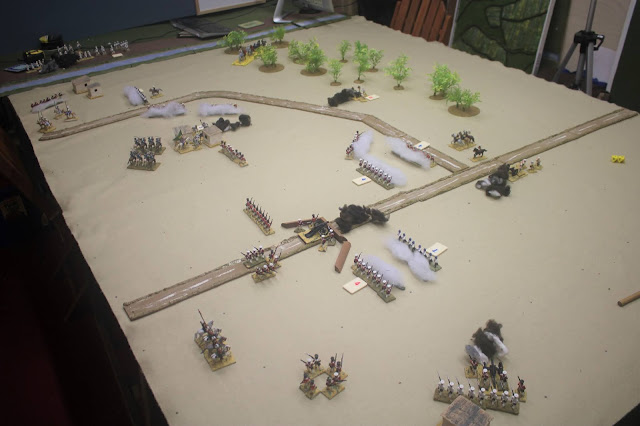 On their right the Sepoys have got a bit more aggressive, and are driving Steve's troops back. Richard, however, has now got all of his men formed up, and is delivering heavy fire into the Palace Troops. 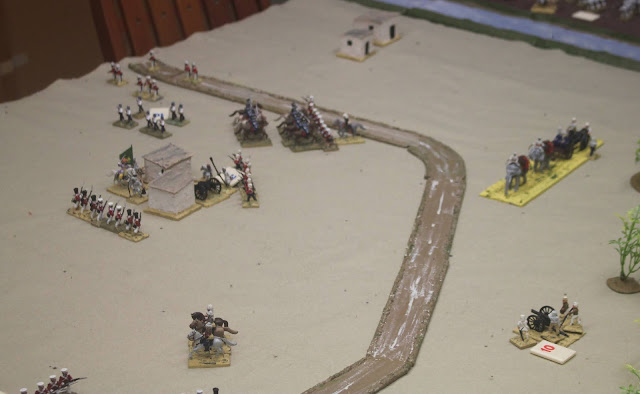 The Sepoy horse try to clear the Highlanders, but they shoot them off as the battalion on their left charges into the village, routing the defending artillery. Richard has even limbered up the Elephant Gun, and is moving it into the centre to provide fire support if needed. 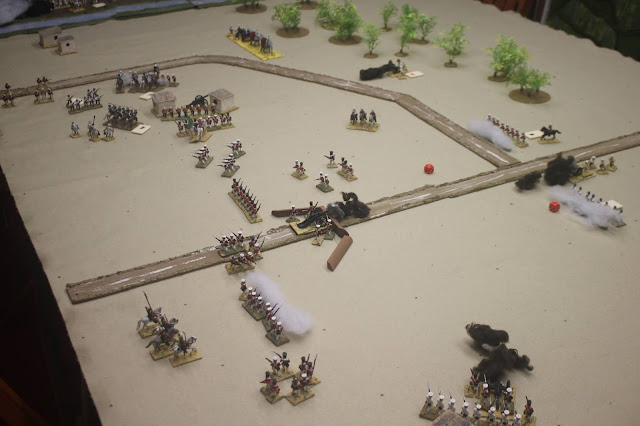 Steve has pulled back to the T junction. His job is done, as Richard is now rolling up the line as planned. Game over.
That took us just about three hours, slightly longer than expected as I had to remind myself of the rules as I've been working on something else recently, and as said above, I did have to re-wire the camera. The game is also slowed as I have to move round the table and move everything, and the rules do require a bit more dice rolling. Even so, a satisfactory evening's entertainment.
I'm really pleased with how the IM rule supplement has turned out, as the game was not originally written with that conflict in mind. The catastrophe mechanism you get from the EDNA (Ever Decreasing Number Allocation) mechanism can make things flip really quickly when it looks like you've been getting nowhere. The tendency of some troops to behave in a dogged fashion but get bogged down has a realistic feel to it.
Next week, a return to Sumeria, I think.
Indian Mutine-era Indian Mutiny wargaming