The game in Spain was mainly amongst the ruins

Another Tuesday, another game in Spain. With temperatures plunging and me all on my own in Shedquarters, there was need for fan heaters to keep me warm. I was joined for this game by Ian, Jon and Richard.

As I'm still playtesting I set this game up with much closer terrain than usual, but a multi-zone wrecked town in the middle of the table, and cut back on the amount of artillery to force the use of different mechanisms and tactics. The game had a couple of Anarchist units holding the smoking ruins, whilst two brigades of Nationalists with some tanks tried to capture them. The Republicans had some off table reserves, but these needed a joker to activate them. 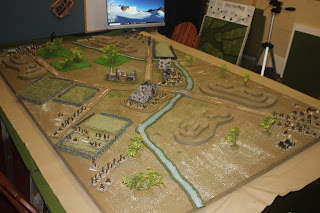 This is a pregame picture, which shows the board, but has too many toys on the table. Most troops arrived on the roads. 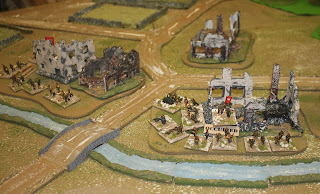 Here are the defending Anarchists. You can see I have made markers to show when units have occupied buildings. I've redone all my status markers with a brown background so they blend in better. They'll be available as an appendix in the rules, "Send Not To Know" when published, and probably also as a download. 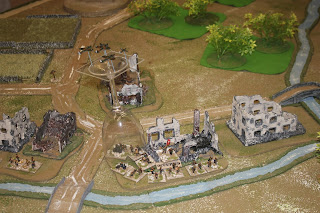 First turn of the game, and the Nationalists get an airstrike. Perhaps that's the tail end of what flattened the houses. Note to self. Need more aircraft. 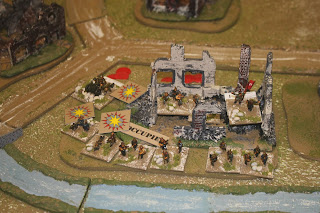 New blast makers too, with a brown background. Less intrusive than the white backed ones. 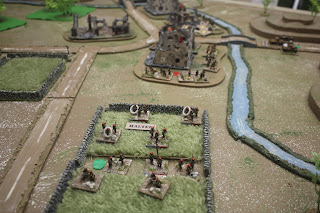 The Nationalists' first move was to drive their armour up the road (in the background) and machine gun the troops who had just been bombed. They followed this up (because of the card mix they had drawn) by bringing on a battalion of Carlists. 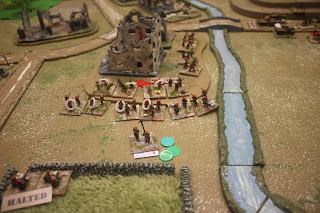 These, inspired by righteous fervour, stormed across the field and assaulted the town, only pausing to deploy their machine guns to provide cover. 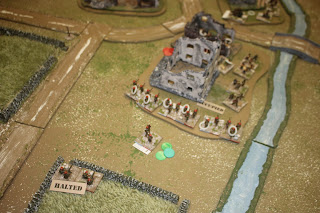 Partly because I forgot the rule about firing when close assaulted (sorry Jon), the Carlists managed to get a foothold on the edge of the town, driving back the defenders. 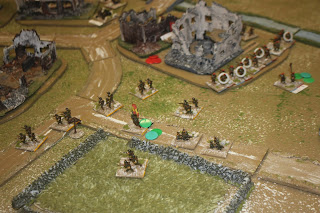 The Carlists were followed by a battalion of Regular Army, who advanced cautiously in skirmish order. 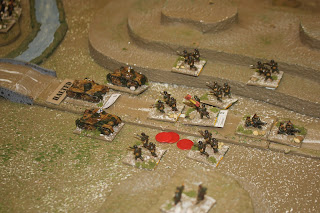 Another battalion finally caught up with the armour on the other road. 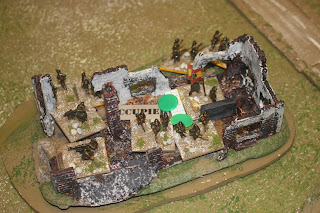 The previously mentioned Regulars now leap frogged into the unoccupied building to the rear of the Anarchists' position. 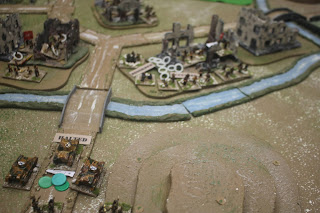 At the end of the turn, the Panzers had done a good job of shooting up the militia in front of them. They had recently gone through a checkered experience, having been forced to retire by a failed Terror Test, after the bombing. The absence of any Nationalists to exploit this slight failing, they recovered themselves, and re-occupied the ruins. Ian was trying to line up an armour supported close assault. 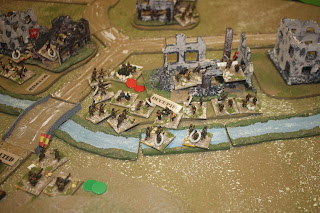 Ian got most of his ducks in a row, and stormed the town, supported by his machine guns. Alas the only way he could do it from the position he was in was to attack in skirmish order. This mitigated some of incoming fire (as did the armour support), but a poor dice roll and the less than optimal formation saw him thrown back with heavy casualties. 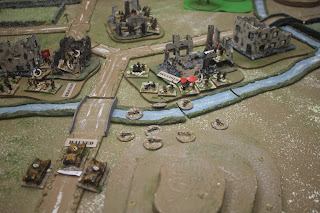 The unit then failed his "It Tolls For Thee" test, and decided to retire from the board completely. 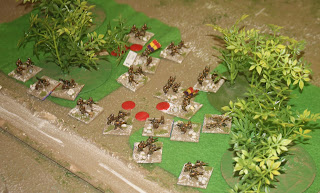 As his militia held on grimly Jon was able to bring on a couple of battalions of Popular Army infantry to bolster the position. 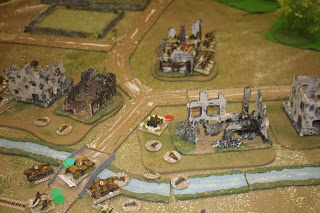 The second attempt on the village didn't gain entrance, either, but inflicted enough damage for the militia to remember an urgent appointment elsewhere, abandoning their anti-tank crew to their fate. 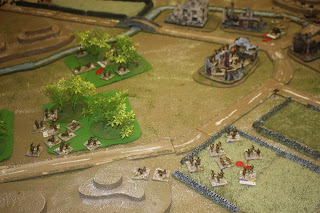 Jon's plan at the other end of the board started to take shape, as he spread out his battalions, taking his time to get into position. 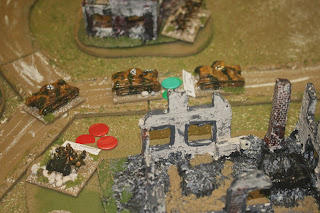 Ian took another bold action, and stormed down the road with his armour, by-passing the anti-tank gun as it had performed all its actions for the turn. 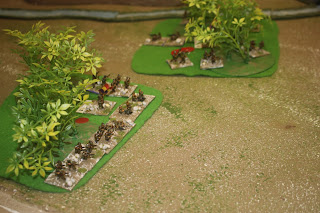 Methodically Jon starting to form his troops into firing lines. Richard pushed his Carlists through the position they had taken, and over ran the anti-tank gun. 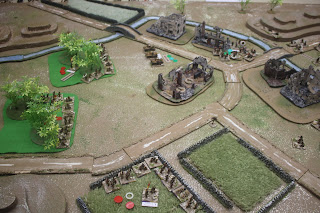 The tanks moved out into an attack line, and machine gunned the far olive grove. Jon, however, held his nerve and concentrated his fire on the buildings in the centre of the table. Because he'd taken his time to get in place he was able to unleash bouts of heavy fire. They started to inflict hits, but because the Nationalists had chosen to bring up their armour instead of reorganising to re-allocate their hits (effectively you can halve the number of hits on a unit by turning temporary damage into permanent hits), Jon was able to put in three rounds of firing from each of his three battalions from fairly close range. This caused every base in the unit to become overloaded, and the unit was destroyed. 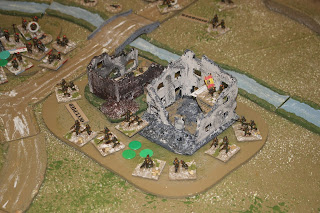 Still, the Nationalists were able to bring up a unit and occupy the first buildings captured by the Carlists. 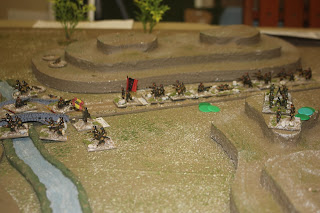 And, finally, the Falange turned up to claim victory.
A hard fought game that didn't quite get to a conclusion, alas. Perhaps I need to start earlier in the evening, or resolve to run games over two evenings. The whole process takes a bit longer on-line as players can't see exactly what they've got and you get a lot of questions about what is where. The SCW is also a bit misleading. I mean, it looks like WW2 but it isn't really even late war WW1 in terms of military co-ordination  and competence. Players sometimes expect Blitzkrieg and they're getting bite and hold. I think in this case, despite holding most of the objectives that the Nationalist bolt is well and truly shot. Jon had another reserve column that didn't even make it on to the table, so I think in another turn of the cards he might be able to claim a win.