With The Legion In Spain 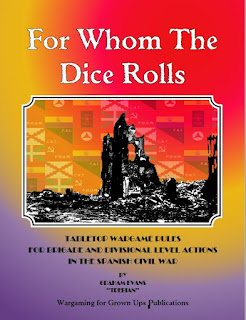 I tried another two hander of "For Whom The Dice Rolls" with Jon F this week. This time I ran a scenario based upon Franco's 1st Column under Lt Col Asensio during the drive on Madrid, trying to take two villages and a river crossing, in the face of some militia, hurriedly rushed to the front by the Madrid Junta.

I seem to be making this excuse a lot these days, but I was a tad rushed off my feet, so I only had time to send Jon his force listing and an outline briefing, rather than the full pack and detailed map my players have been used to getting recently.

Luckily I had enough time when I'd finished sticking in the plants we'd (that's me and  Mrs T, not me and Jon) had picked up from the Garden Centre to take a couple of quick photos and fake up a flyover by a Condor Legion recce flight: 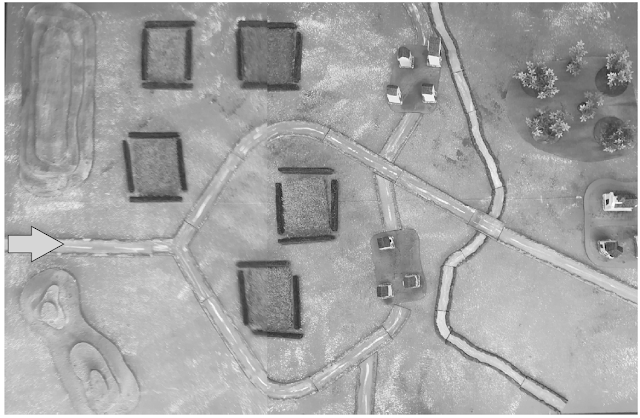 Thus armed, we were ready for the game. Asensioi's column has 1 x SFL Bandera, 2 x Tabors and 1 x 75mm battery, all with trucks. I had three militia columns, plus a battalion of Civil Guards, but I was closer to the objectives.
And fired up with revolutionary zeal. 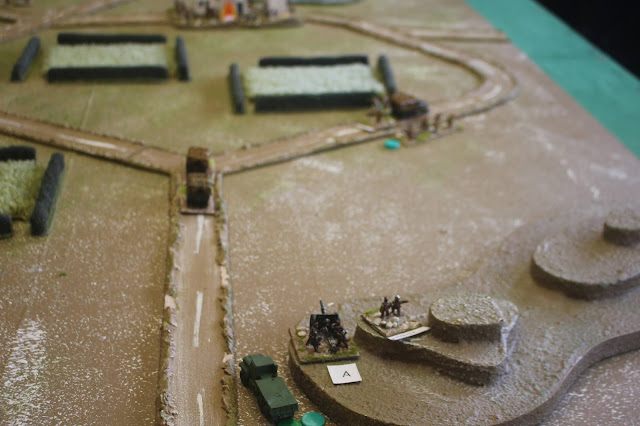 Jon has got his basic tactics sorted now. He identifies his first objective, deploys his artillery, and starts to shell it, in order to pin the defenders. He then rushed up a Tabor in a truck, and debussed. I thought he could have pushed up further in safety, but the smell of burning trucks from the Guadalajara games still lingers in the nostrils. 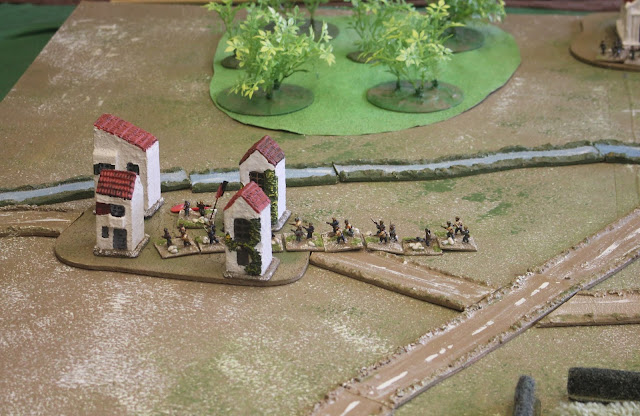 Mean while a column of Anarchists marched into the other objective.... 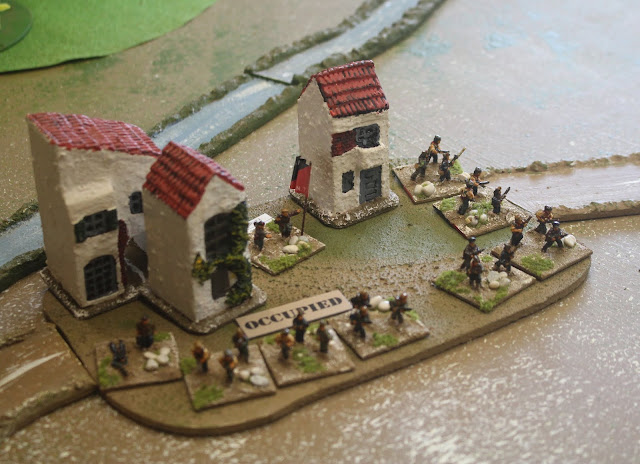 ...and set about fortifying it. 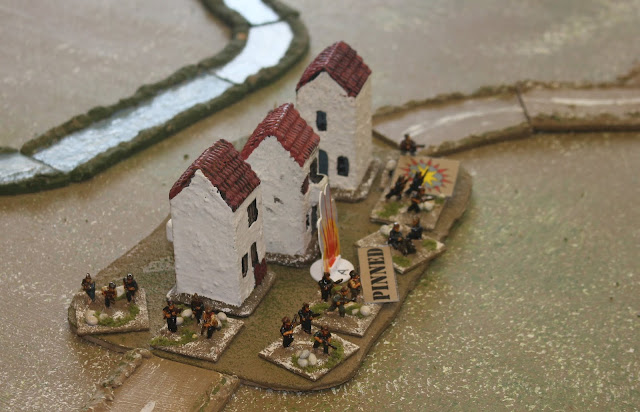 Jon continued to shell their colleagues in the other village. 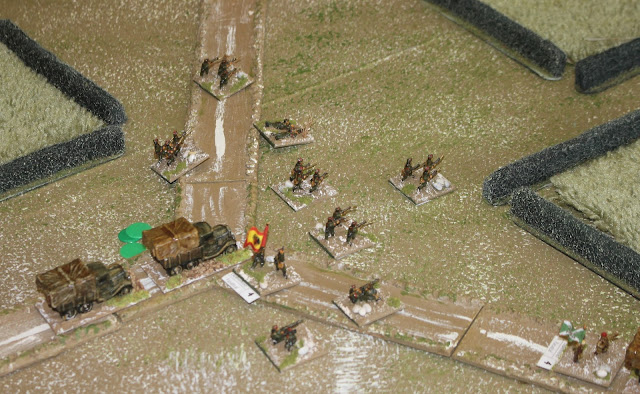 The Legion Bandera now roared up in their trucks and leapt out. 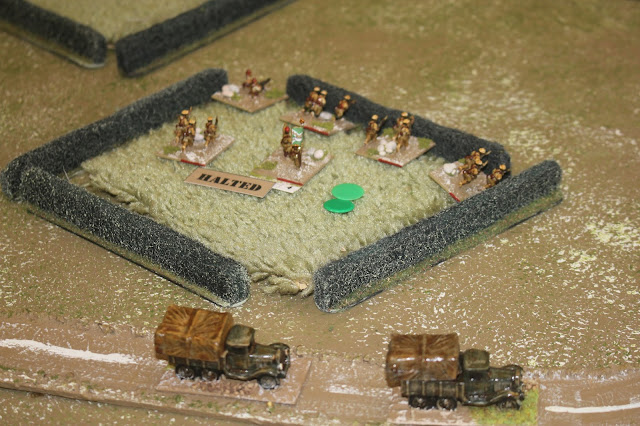 The first Tabor advanced across the field, whilst the other Tabor zipped past in their truck. 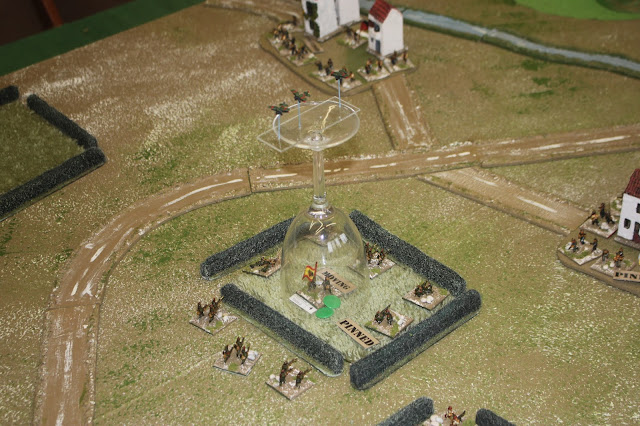 Then a flight of Republican fighters turned up and strafed the Legion, to very little effect. 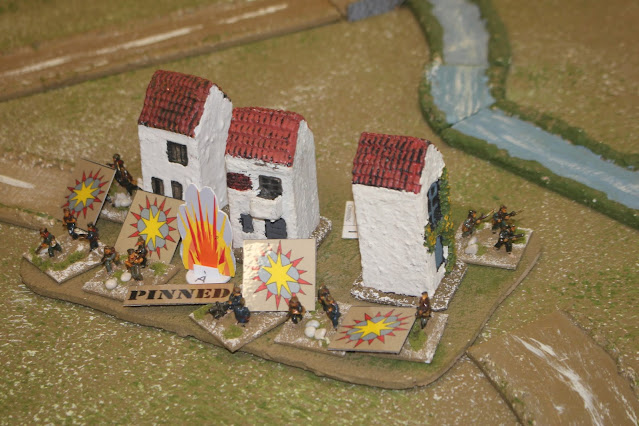 Jon kept on pounding the village. 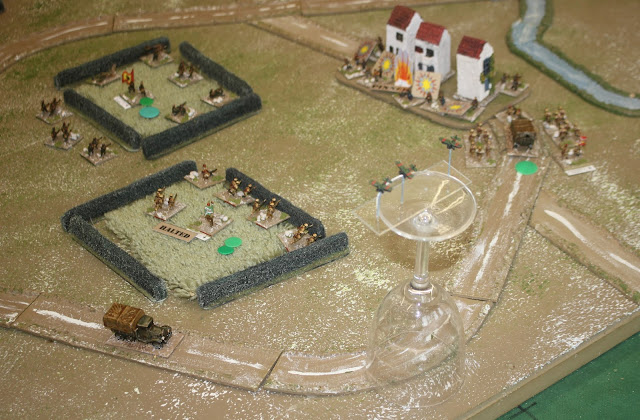 My second airstrike arrived, and missed everything. Curses. 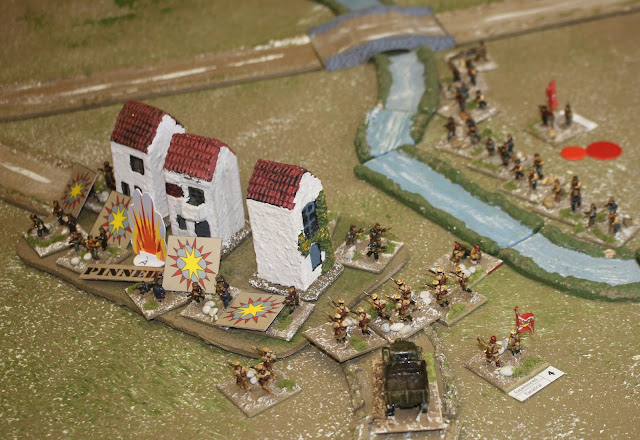 The 2nd Tabor stormed up to the village in trucks, and debussed, forming a firing line. They seemed contemptuous of the workers just across the river. 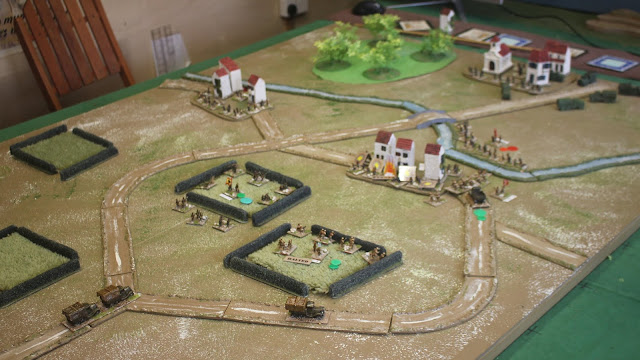 This is a wide angle picture of where we were at this stage. 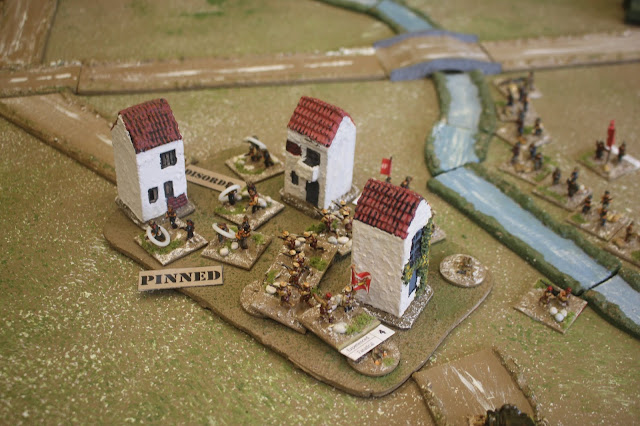 Jon survived a round of shooting from the militia across the river. He then lifted the artillery bombardment, delivered a couple of rounds of small arms fire, then rushed the village. 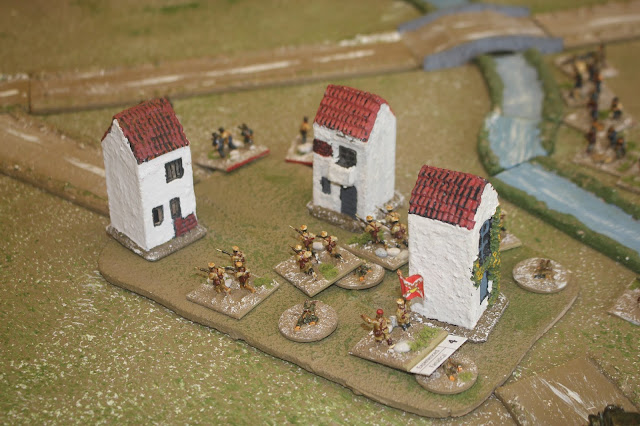 It was all over fairly quickly. 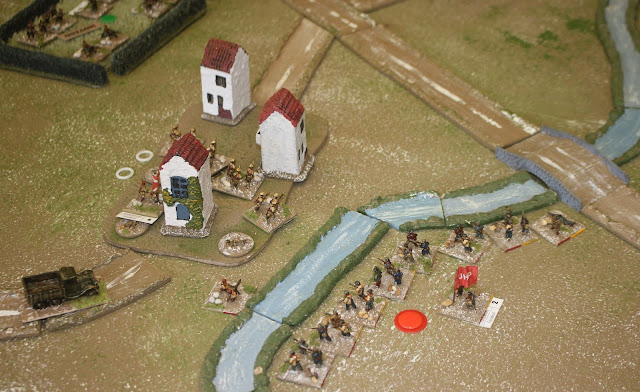 The workers across the stream did inflict a small amount of damage.

Only to be strafed by the Condor Legion for their pains. This caused them to retire. 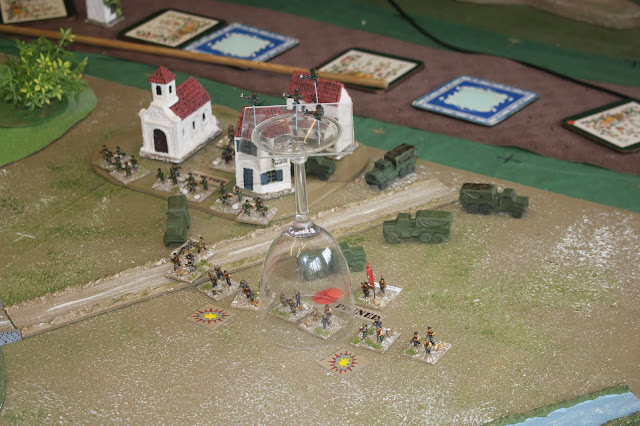 Where they were caught by the second wave. 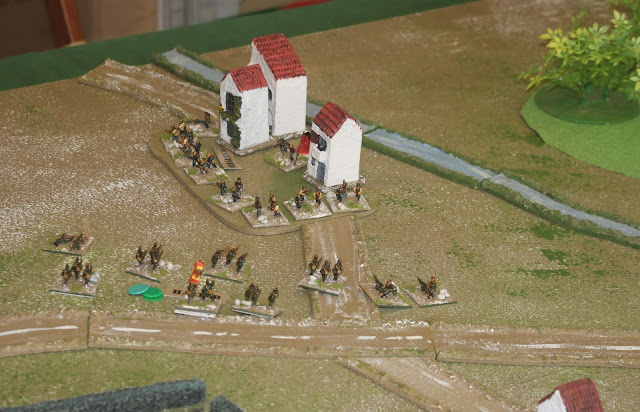 The Legion, not to be outdone, advanced on the other village. 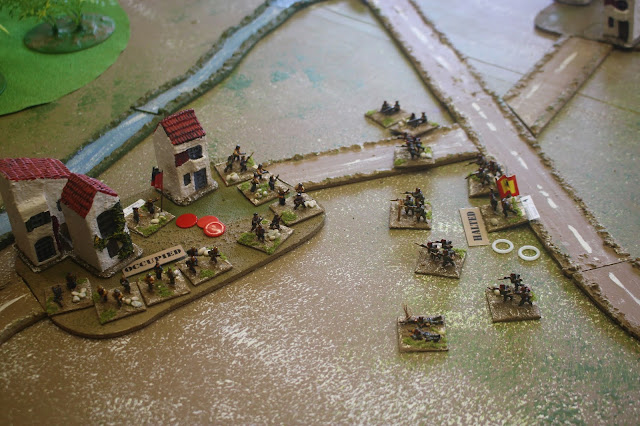 There was a brief exchange of fire, then they rushed the village. 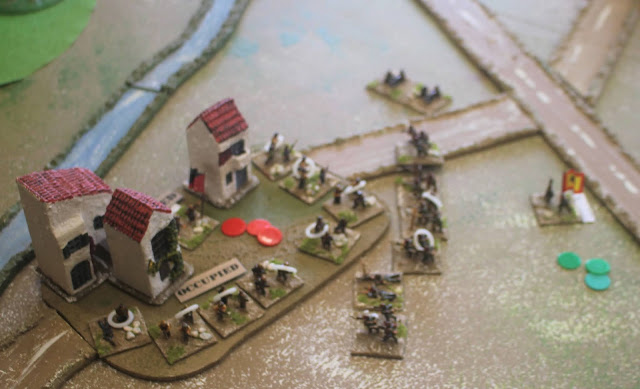 A brief round of fighting saw them repulsed. 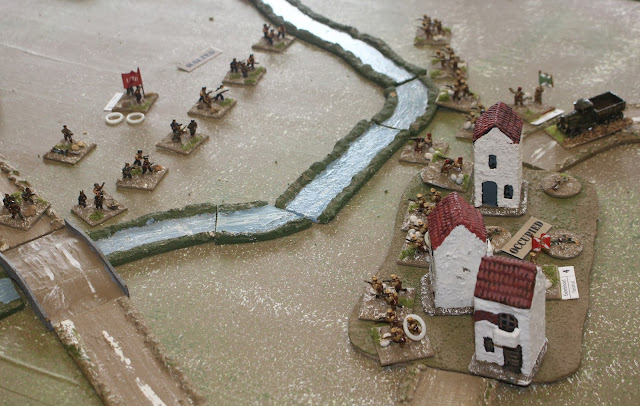 On the other flank, the militia returned to the fray. 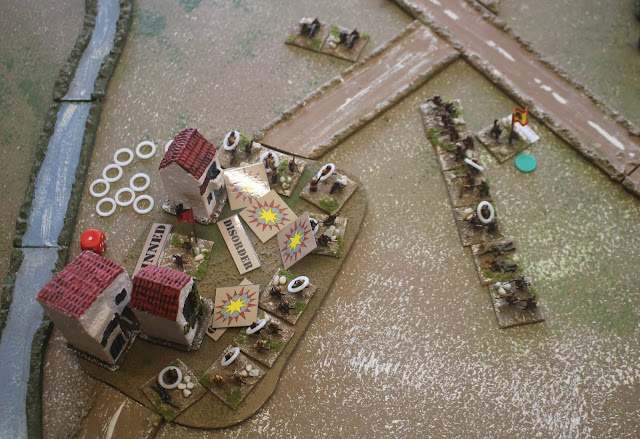 The Legion put in some more fire... 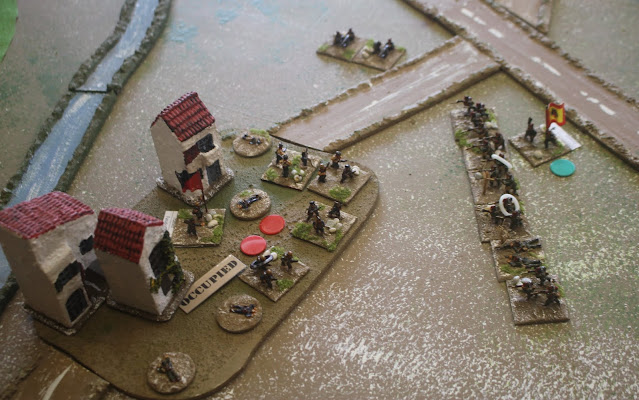 ... I reorganised, consolidating my losses. 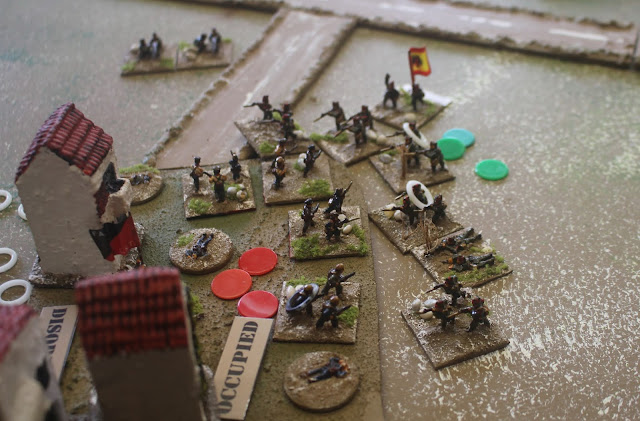 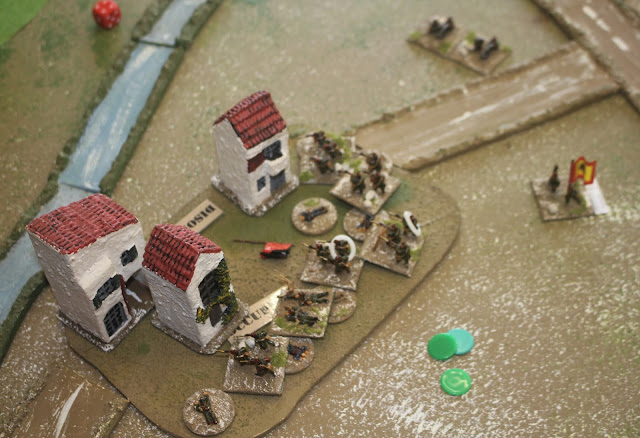 Second time was the charm, and the anarchists died to a man. 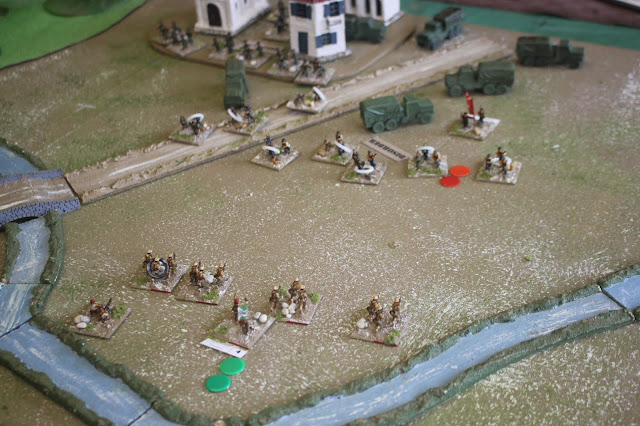 On the other flank, the Moors drove the workers back from the river. Apparently it was only a stream, and easily crossed. 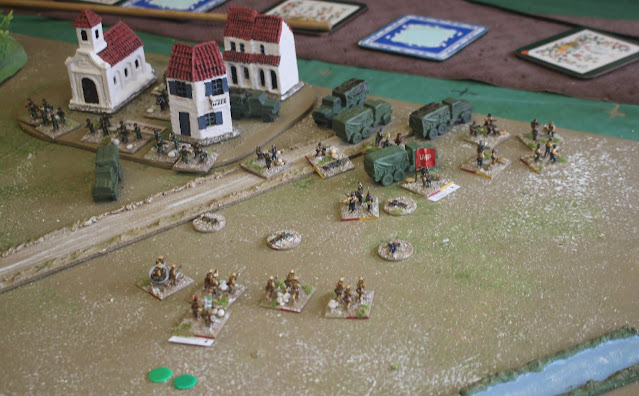 The Tabor delivered a quick burst of firing, and then rushed the militia, who fled back to their trucks. Game over.
The game was set for 2 1/2 hours, and Jon had to take the villages and bridge by then, which he did with 30 minutes to spare. He was helped by me rolling 78 d6s, and only getting two sixes at one point. He pushed his luck, and succeeded marvellously. He didn't play a perfect game - another 11 hits from a par dice roll would have destroyed one of his Tabors, and let me get my Civil Guards up to counter attack. As it was my army was broken before they even moved.
There's a need to modify this scenario, but it is a valid one, and probably needs to be written up properly.
I enjoyed it, even if I did get clobbered.