Richard has taken a break from organising games the last few week, due to having some shelves built, but this week he was back with the next round of aerial shoot 'em ups on the Western Front. 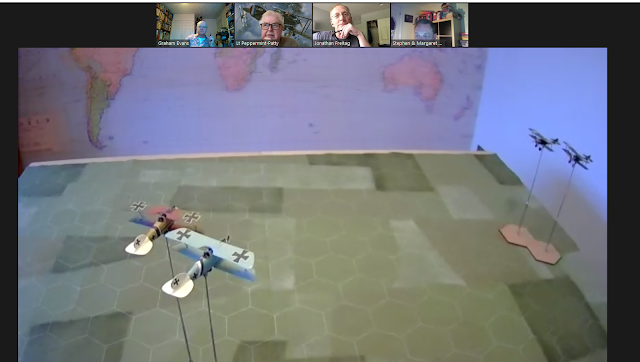 Two patrols returning to their lines sight one another. Jon F and I were Germans in our brand new Albatross DV's (all our previous aircraft having been shot to bits in the last game, and our planes on the ground bombed to matchwood). I'm in light blue. The British were Ian and Steve, in Sopwith Pups. 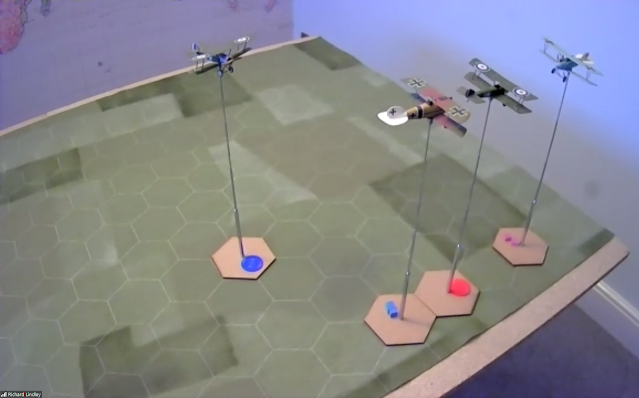 In a few turns of clever flying Jon and I had Steve in a pincer. The DV's are a lot easier to fly. With the DIII you had to climb so that you could dive to get speed to do anything other than simple turns. You still can't string a series of complex manoeuvres together, but at least you have more in the locker when simply flying straight. 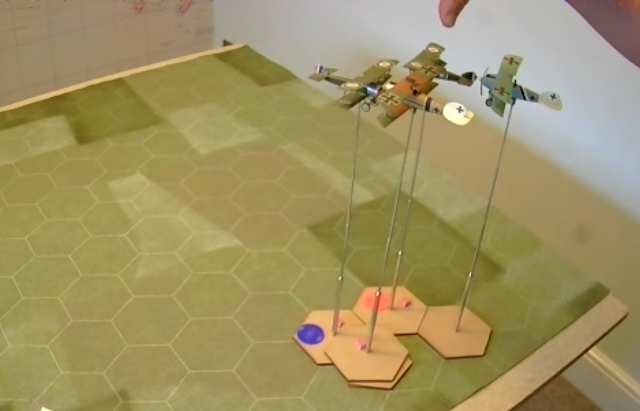 It all got a bit jumbly, down in that corner, but I ended up on Steve's tail and gave him another blast from my dual MGs AND DID NOT JAM. The game's a lot more fun when that doesn't happen. 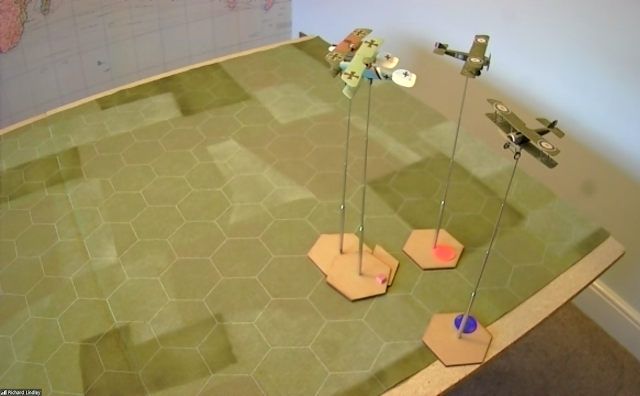 Steve Immelmanned me, but I side slipped out of the way. Ian flew off the edge of the table. 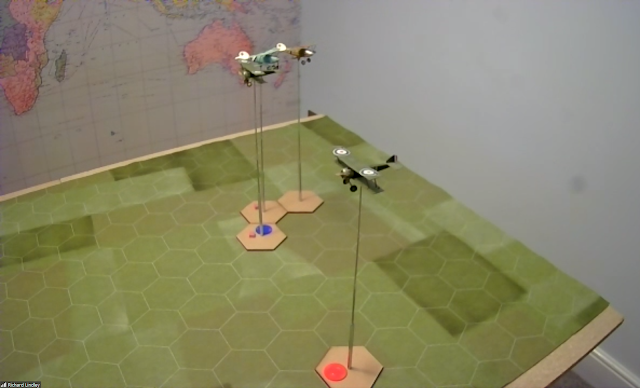 Richard had to shuffle us four hexes up. I am loath to criticise the umpire, but I think it might have been better if he'd done it at the start of the move, rather than half way through. 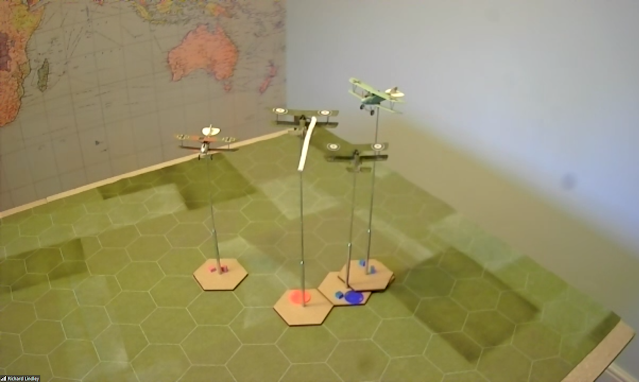 Another quick turn, and I was on Steve's forward starboard quarter and unloaded into his engine, causing a fire. 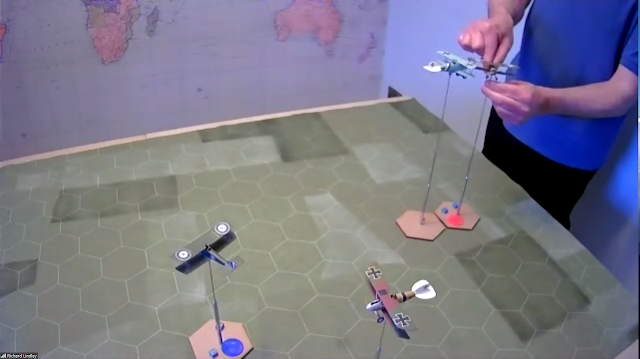 Steve dived and dodged past me, to put out the fire, but using my new found mobility I did a right wing over and caught him amidships. 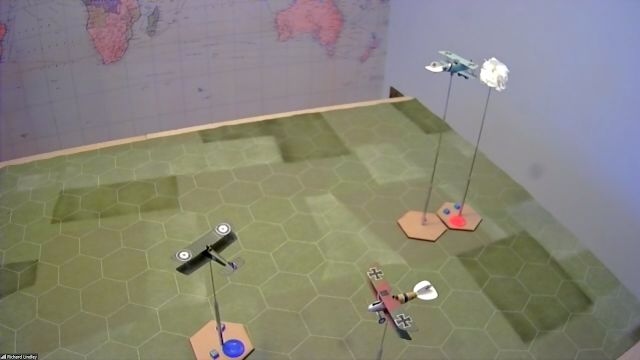 Which saw his plane explode into a ball of flame and smoke. As Richard put it "I don't think you're getting out of that one, Steve". Meanwhile Jon was hot on Ian's tail. 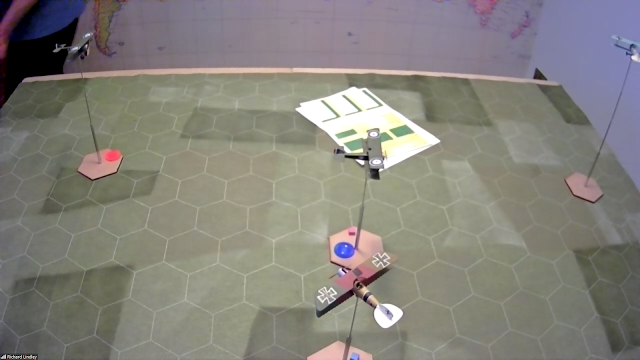 Steve returned in a brand new Pup. This meant a tricky decision time. I now had another kill to my name, but I had used half of my ammo and had taken a couple of hits. The desire to land safely and bank the kills was quite strong, but it was important to maintain face. 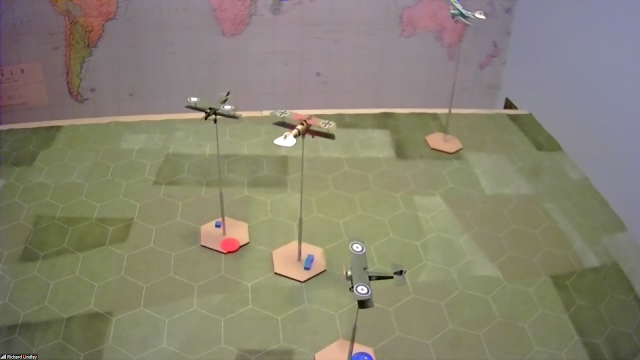 I needed to stay out of Steve's way, until I could get behind him, so I started to circle out wide to the far side of the board, and kept an eye on my height so I was at a different level to the British planes, preferably above. I could then dive down and use the added speed to do even cleverer stuff. You learn these tricks from flying poorer quality planes. 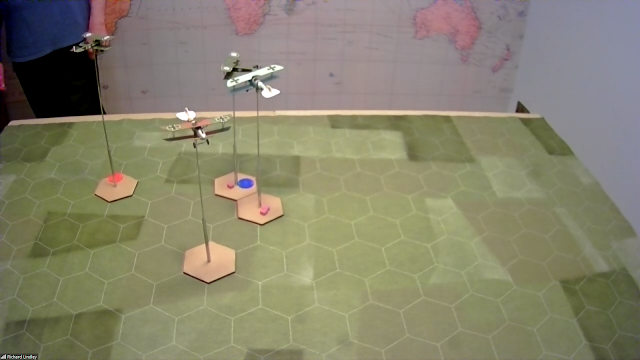 It worked, and I got round Steve as he tried to Immelmann me again, and raked the side of his plane. This was a bit tense, as I needed to keep a close eye on the climb and dive markers on the bases, so I didn't get caught out. Down to two rounds of firing left. 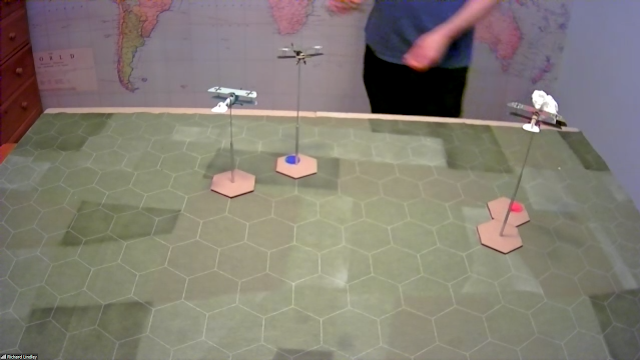 I dodged in front of Ian, and dropped a level to draw him away from Jon, who was closing on Steve. He got a couple of hits, and added to the damage I'd done earlier, Steve's plane exploded again.
I now felt honour had been satisfied and I could head for home.
At the end of the game we Germans were in good shape. Jon now had enough kills for "Ace" status, and I've now survived two games. The future is looking quite bright, but it is a fragile brightness. One unlucky hit and you're a ball of flame.