COW Preparation - A Game of "It's getting A Bit Chile"

COW is happening this year. Lots of restrictions, reduced numbers and sessions, food pre-ordered, sanitiser everywhere, but it is happening. Better make sure I know what I'm doing for my sessions.

I'm running a game of "For Whom The Dice Rolls" and also "It's Getting A Bit Chile". I'm confident with the former, but haven't done much IGABC recently, so I thought I'd better run a game of it. 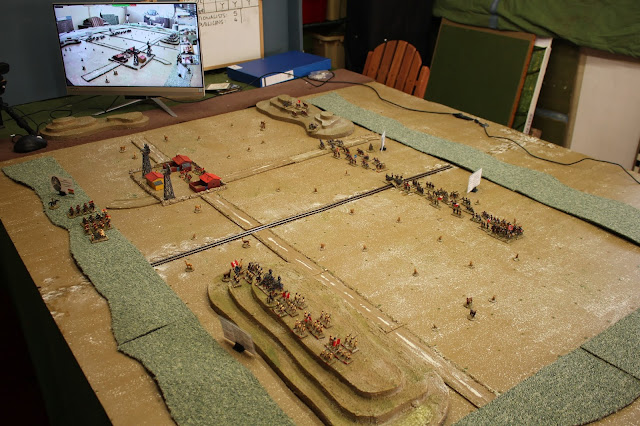 The game had the Chileans on the right who had to capture the hill and buildings on the left. They were commanded by Jon and Steve. The Bolivian/Peruvian Alliance had to hold these and capture the hill in the far corner. Ian was the Peruvians, and Phil, when he arrived, was the Bolivians.
Both sides were allowed to deploy up to 3 squares in, to get things moving. Ian decided to sit on his hill and wait for Phil to arrive.
I had set the Chileans the harder objectives, and compensated them by making them "top quality" (something I rarely do), and gave the Bolivians "old rifles". 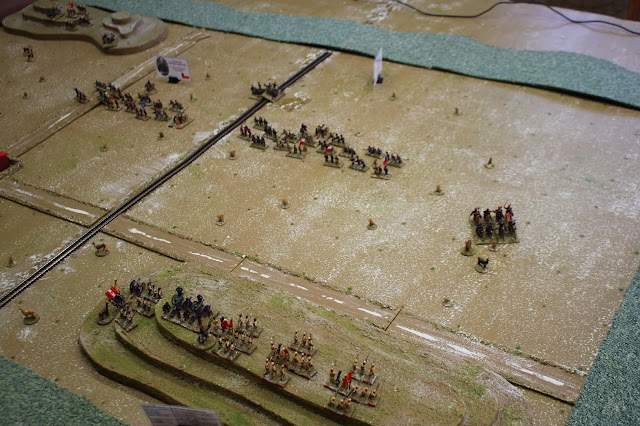 Jon put everything in open order and advanced, sending his cavalry out wide. He deployed his artillery too, but neglected to ask me to point them at the enemy, and found they were out of arc when he tried to line up a shot. Steve deployed his guns on the Chilean hill, and posted an infantry battalion to defend it, then advanced with everything else. 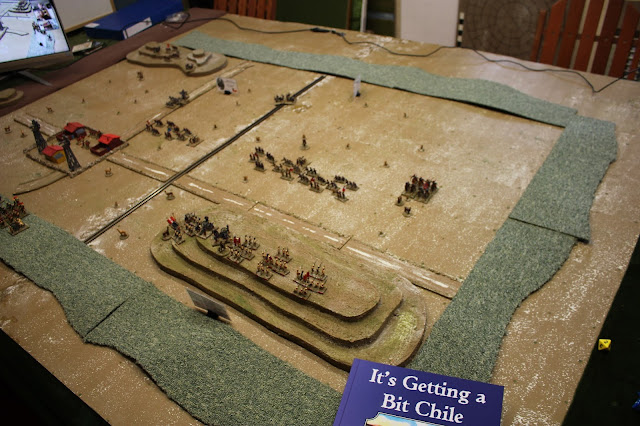 The Chileans pressed on hard, hoping to steal a march whilst most of the Bolivians had not yet arrived. 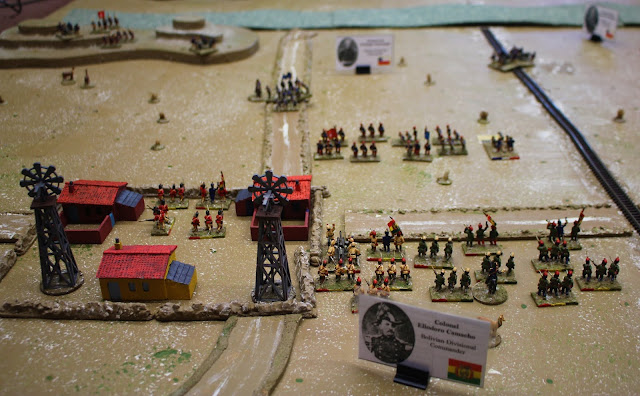 Too late - Phil arrived with the metaphorical cavalry 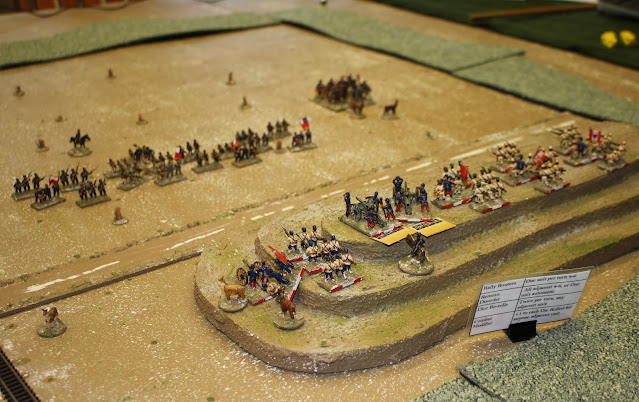 Jon's artillery realigned itself, and hit the Peruvian guns on the ridge line. 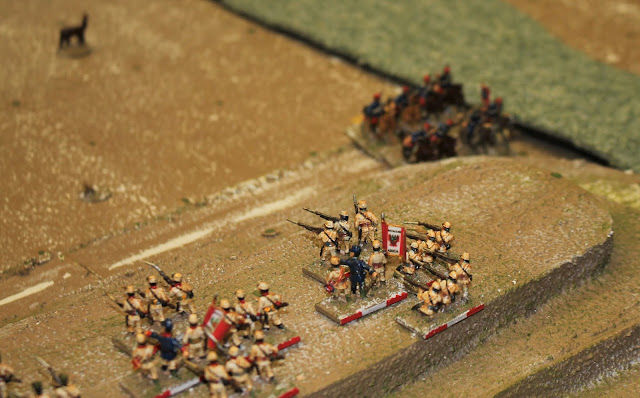 The Chilean cavalry succeeded in getting out wide of the Peruvian position, only receiving one hit/disorder marker in the process. 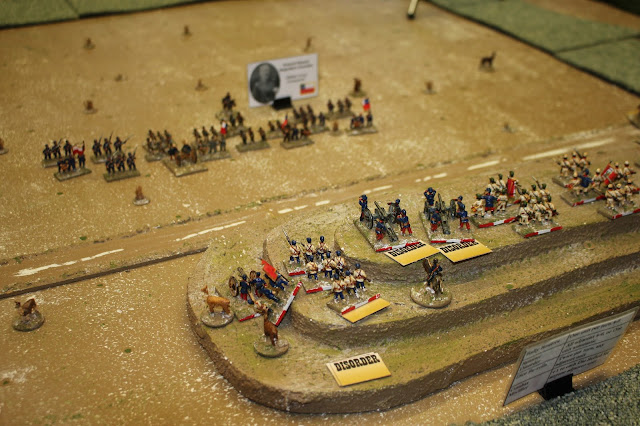 The troops were now in rifle range, and a fire fight ensued. Ian's commander stationed himself on the left of the line, and was kept fully occupied recovering the troops from Disorder. 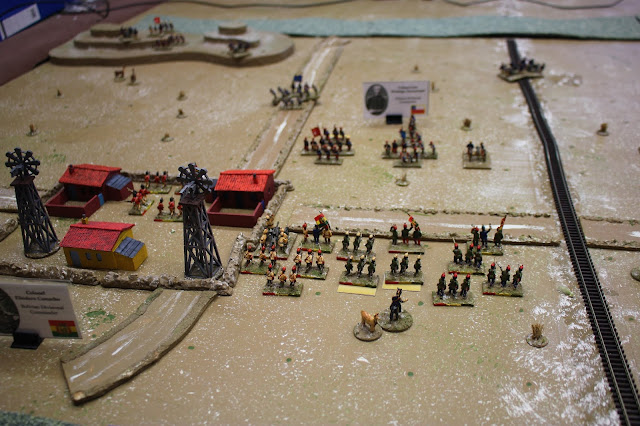 Firing had also broken out at the other end of the Allied line. Steve had been shelling the officiana speculatively to little effect. He needed to get everything lined up and concentrate fire, otherwise the potential damage was absorbed by the buildings and walls. 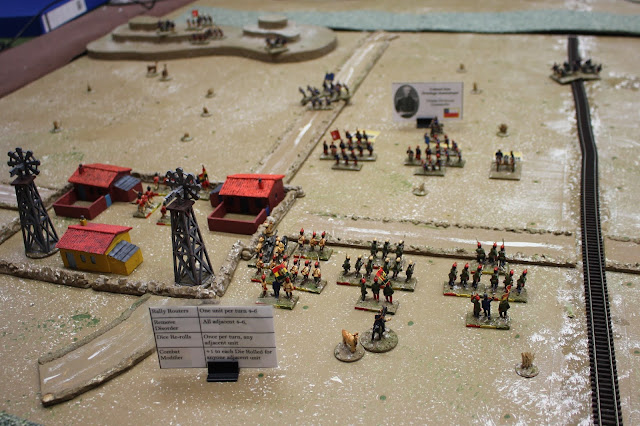 Phil reformed his men into a firing line, and his increased volume of fire had an immediate effect. 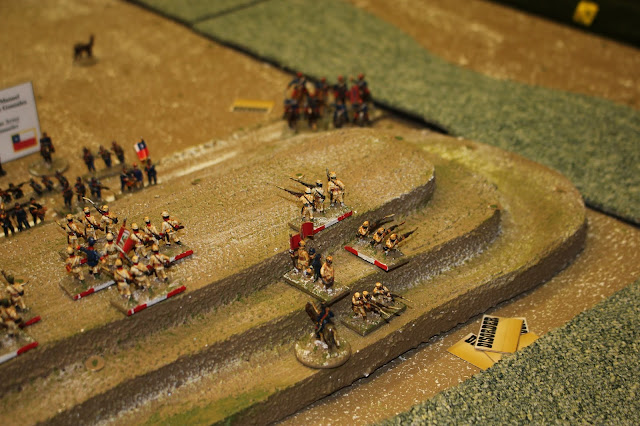 Ian had reacted to the cavalry flanking manoeuvre by forming square (!), instead of just wheeling his firing line and despatching the horsemen with sustained volleys. This meant that he was immediately subjected to every rifle man Jon had in range opening fire. They sustained a lot of hits, and staggered back down the hill in considerable Disorder. 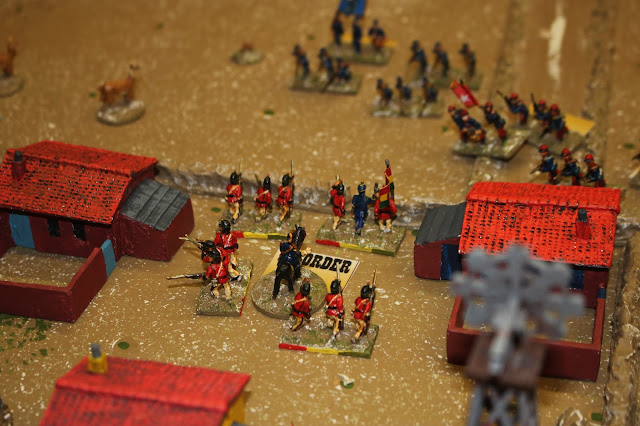 With the officiana under serious threat, Phil moved his General into the compound to remove some Disorder and inspire the troops. Steve was lining up a couple of battalions for a bayonet charge. 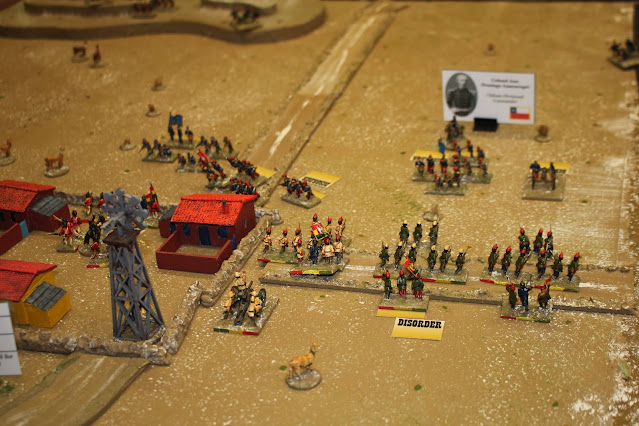 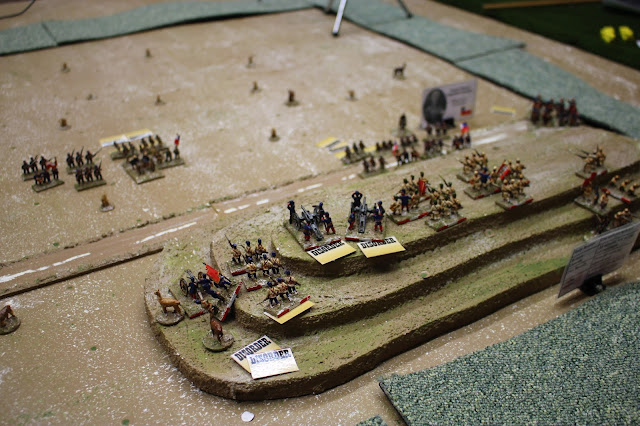 The fire fight intensified on the other flank as well, Ian's General being the only thing stopping his left flank collapsing. 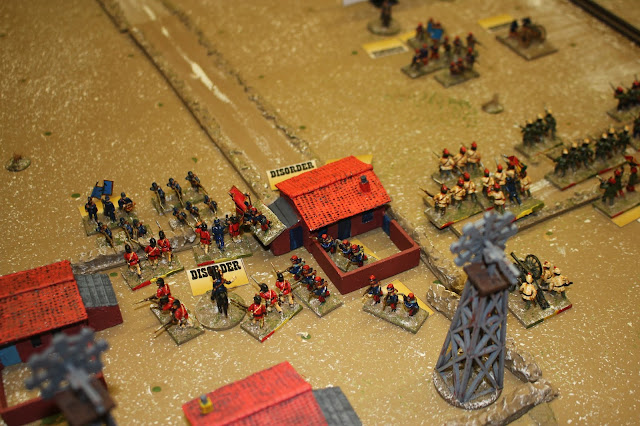 The Chileans stormed into the compound. A brief round of vicious hand to hand fighting broke out. 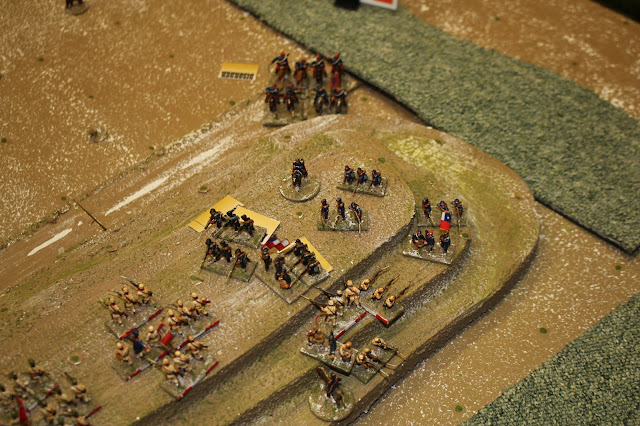 Jon pushed his infantry up on to the right hand end of the ridge. He'd taken a bit of fire, but was now in prime position to take the fight to Ian's troops. 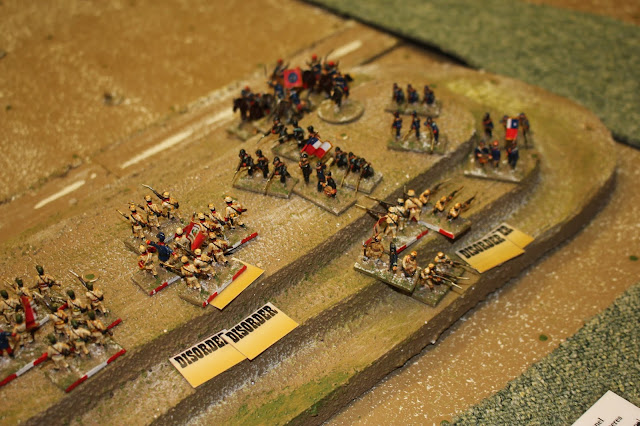 Join's firing caused a lot of disruption, and he moved his cavalry up to support his foot. More significantly, Ian galloped his General up to this end of the line to bolster his failing square only to be wounded, and forced to retire from the field. This meant he could no longer automatically remove Disorder, and had to rely on rolling sixes. Without him there the square would be quickly broken. 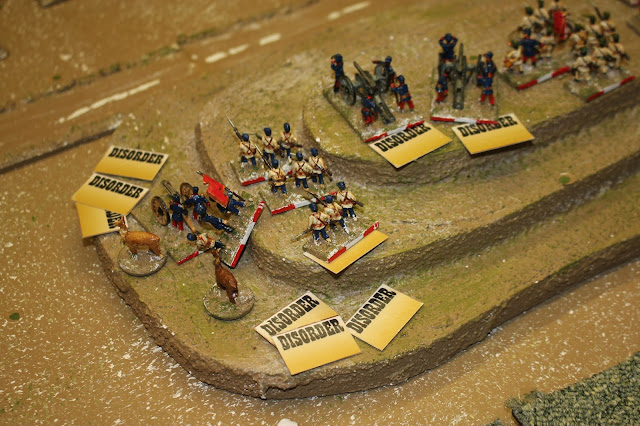 The Disorder continued to pile up on Ian's left. It didn't seem to bother the llamas. 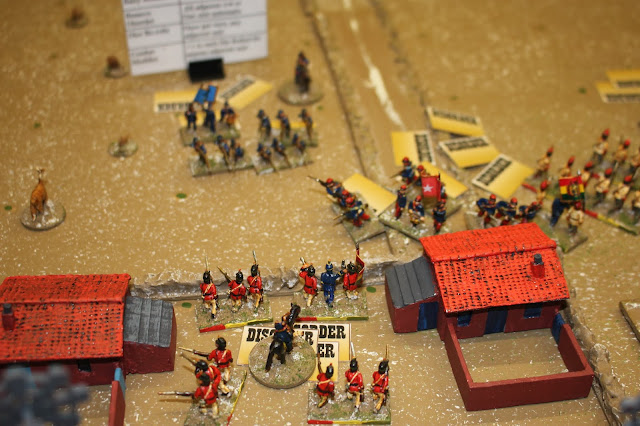 Phil finally threw back the Chilean assault troops in some disarray. 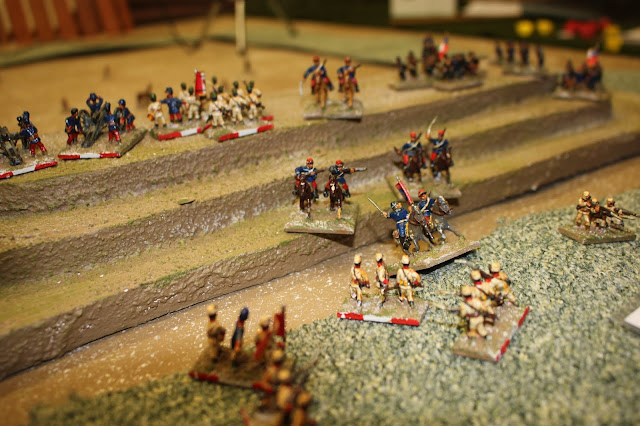 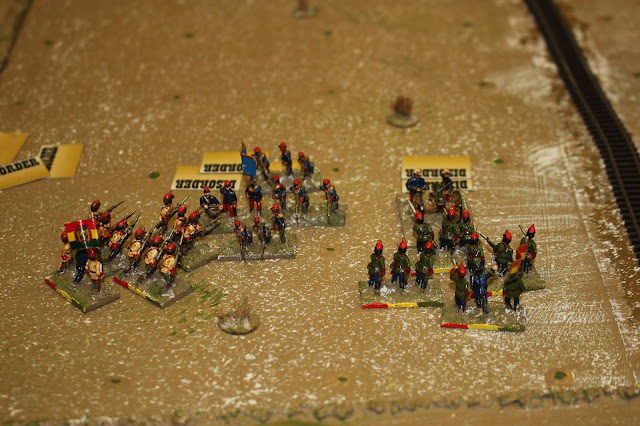 On the other wing, Phil's Bolivians closed with the bayonet. 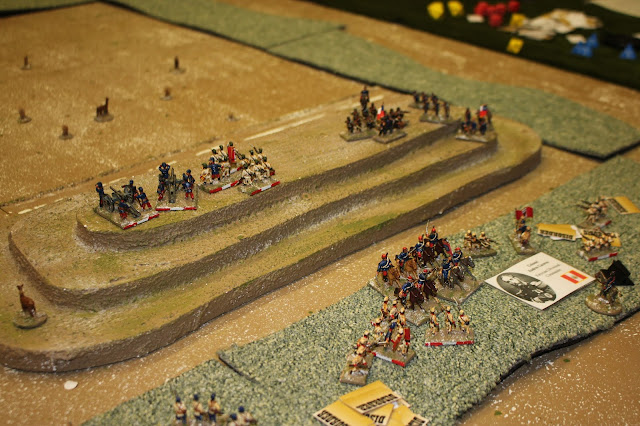 Ian's left now collapsed and fled, without their General to remove Disorder. 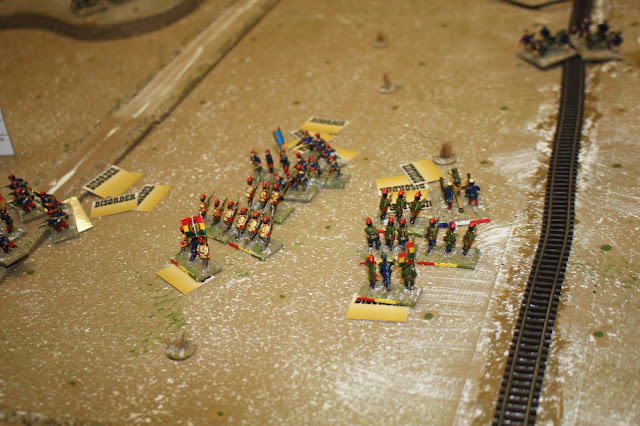 Phil's Bolivians both won, and the Chileans holding Steve's left were heading back at some speed.
So, as we ended the game the Chileans were holding one of their objectives, with the Bolivians clinging on to the other, but with no prospect of taking the Chilean hill. Strictly this was a draw, shading towards a Chilean victory, with Ian's command broken, if Steve could hold on then Jon could swing round and take him in the flank. In addition, the Chileans could now focus two full artillery batteries on the Bolivians, which would probably prove decisive.
Well, I enjoyed it. Lots of action, with the outcome sitting on a knife edge in both locations. A really useful refresher for me on the rule system. Whilst all my rules are different - I really try not to recycle the same mechanisms over and over again - there are similarities in places, and I have to concentrate hard on exactly how I solved certain problems in these rules compared to the SCW set, for example.
Good to get these boys out again.
BTW Jon beat me to the punch with a lively account of the action over on his blog.