ECW in the USA

Jon has been so impressed by the professionalism shown by me and Richard in our game presentations* that he has been nervous about putting on anything himself. However, with a bit of gentle persuasion he finally cracked, and tentatively offered to put on an English Civil War game, and wondered if that would be okay.

Of course it would! We're always up for a bit of King v Parliament (or as it is known in our group "baddies v goodies").  Jon put a matched pair of armies on the table in a fictional setting he dubbed "Edgecote Moor", which apparently is very funny. 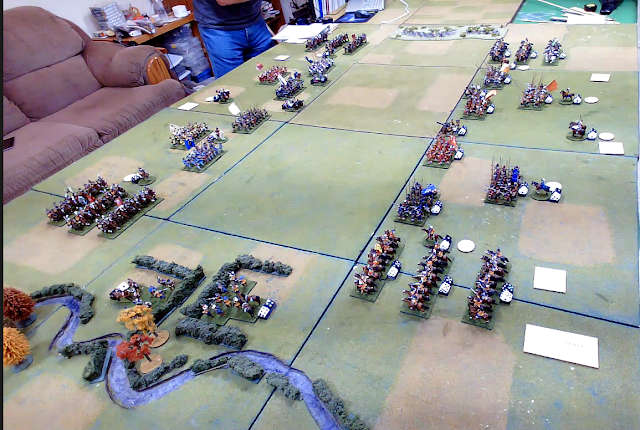 Here we are, Parliament to the right, Charles Stuart (TMOB**) to the left. I have command of the Parliamentarian cavalry near the stream. Will has the infantry in the centre, and Phil has the right wing cavalry and infantry. Richard has half the Royalists facing me, and Ian is facing off against Will/Phil. The quick plan is to refuse the left, whilst Phil uses the big right hook. Richard has Rupert's cavalry, so the longer I can put off the inevitable, the better. 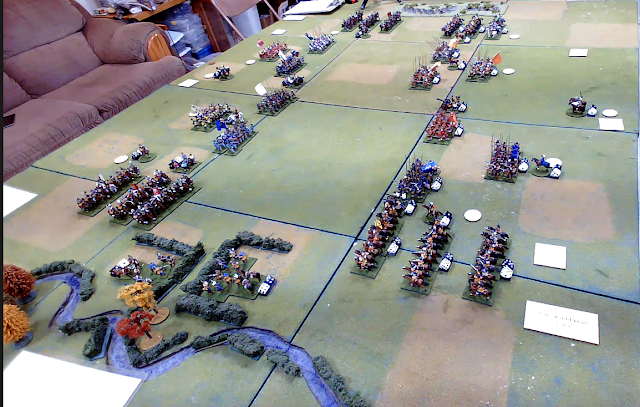 The action starts on our right. There are some artillery exchanges, and the cavalry approaches each other. 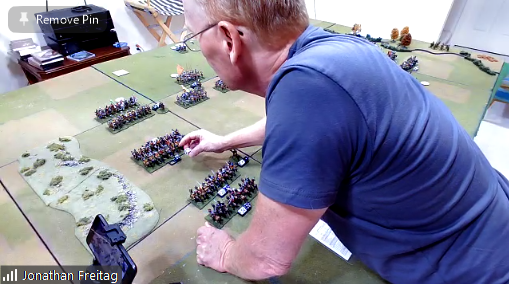 Jon gave us two cameras to switch between, one at each side of the table. I had problems focussing on this end, as I couldn't get a full screen for this one. 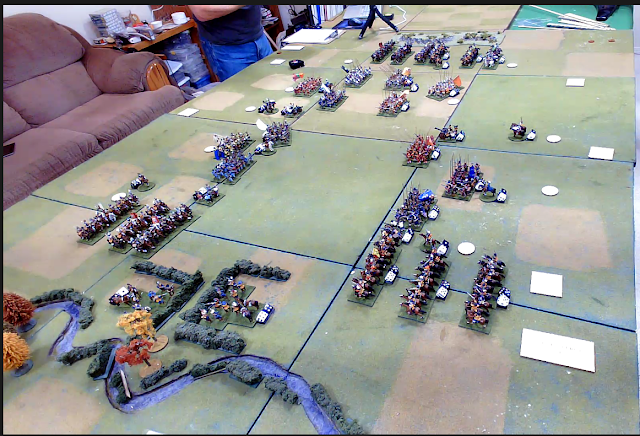 The cavalry on our right closed. Phil pushed his infantry up, and wheeled his second line foot to threaten the flank of Ian's cavalry. 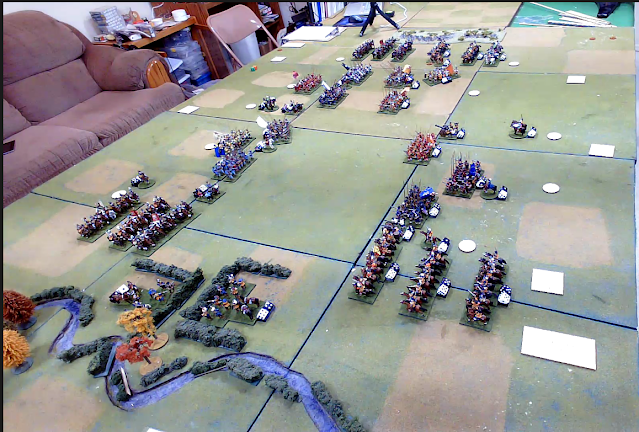 Phil wins the first cavalry fight, and sends Ian's front rank back, disrupting those behind him. The dice behind the units represents the unit's "Combat Effectiveness". The white one is the current CE, the black is the maximum. The CE falls if you get hit and you can recover it, but if it falls too far, then the maximum you can restore to reduces, and that is shown on the black dice. This is quite similar to the MV system in "Taiping Era", so rolling low numbers is a good thing. 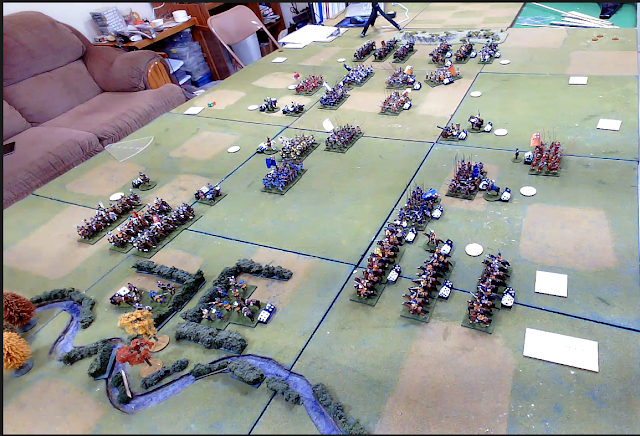 The infantry close with each other. Well, the Royalists advance. Will's red infantry suffer a "double six disaster", and fall back in confusion. In the hedge rows the dragoons bicker at each other to no great effect. 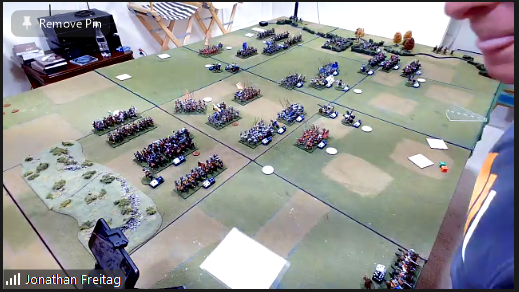 Back up at the other end the cavalry are grinding into each other. Ian's first unit has now retired back to the base line. 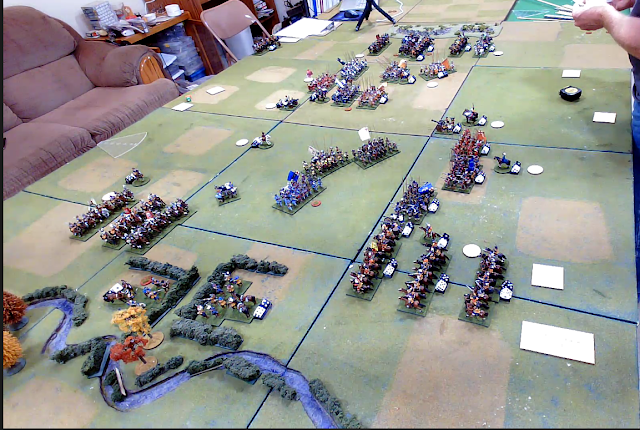 The infantry are in range of each other, and some firing breaks out (NB I like to see some smoke markers in online games, so you can keep track of where the shooting was going on when you look at your pictures.). Will's red regiment has moved back into the line. In the distance Phil is steadily gaining the upper hand. How long can Prince Rupert hang back and let the rest of the army crumble? Richard is pushing forwards his infantry and artillery to try to gain some form of advantage before he charges. 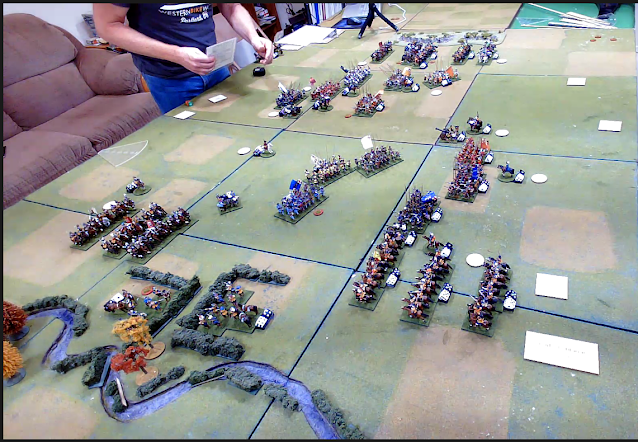 Phil is also getting on top in his infantry fight. 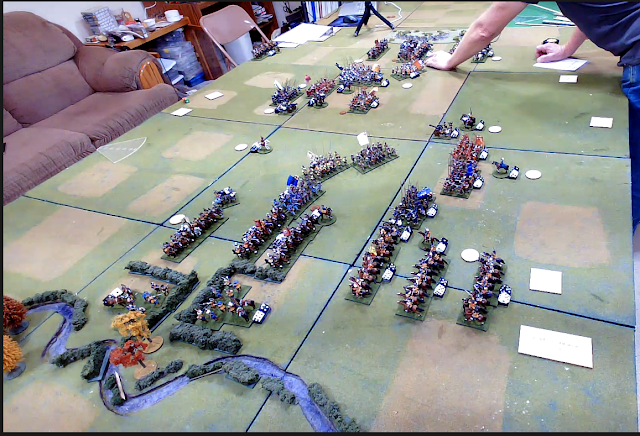 Richard finally rumbles forwards with his ferocious battle cry "This should be fun". His infantry and Will's are exchanging fire. 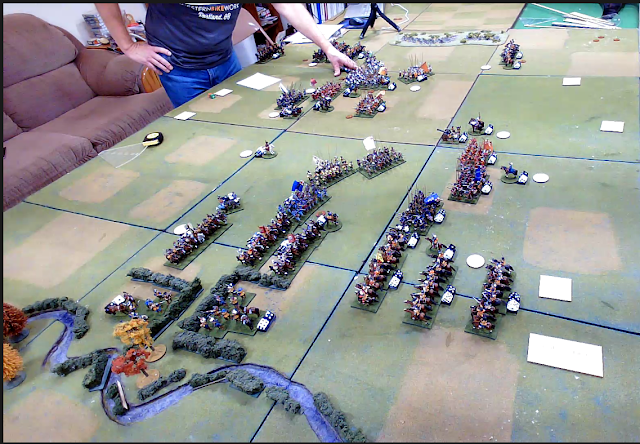 Jon in classic "Did you mean this unit?" pointing pose. 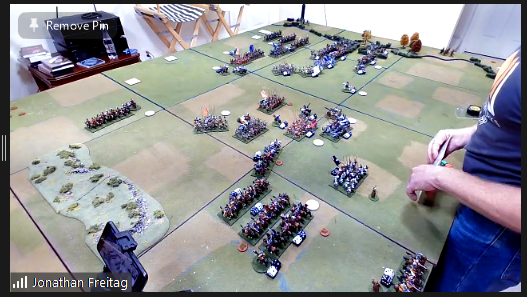 Phil has driven Ian's cavalry further back. He still has some trotter cuirassiers in reserve to exploit his success. 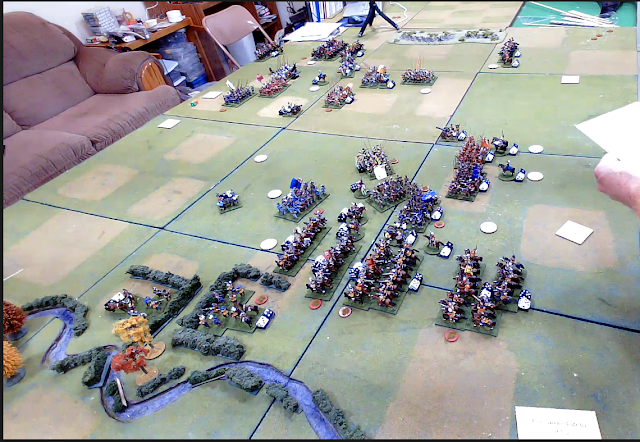 The cavalry on my flank is now in action. Richard charged, and I counter charged. Richard also chucks one of his infantry units in as well to soften up Will's line of foot. 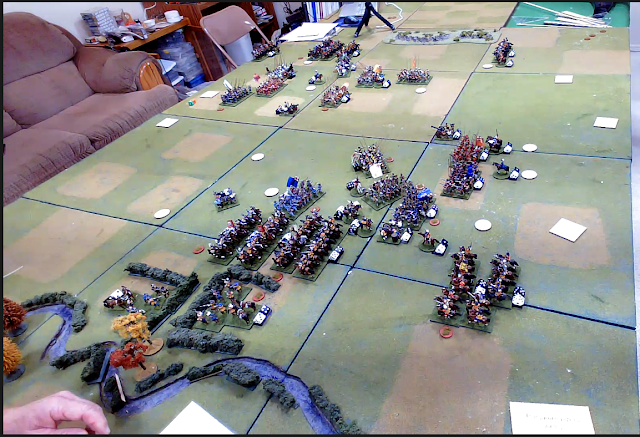 My patience is rewarded. Rupert's cavalry is driven back, and Rupert dies in the action. 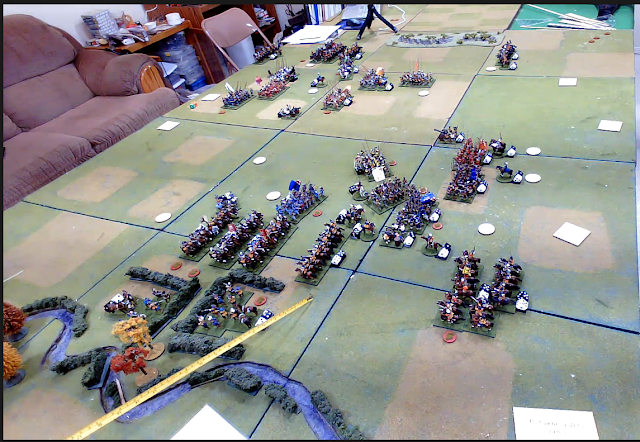 The ripple effect of the front line being driven back causes problems in the supporting ranks. 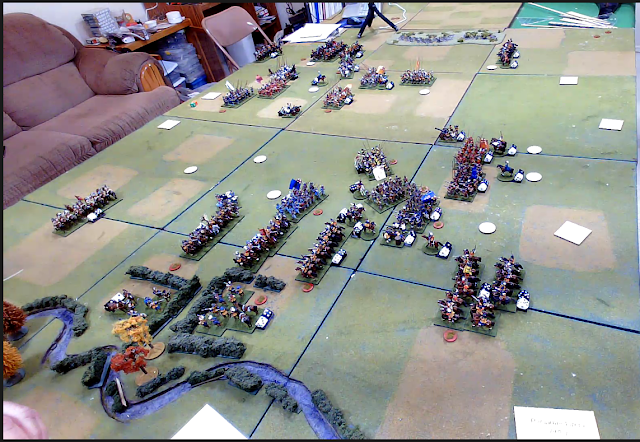 I follow up and Richard's men fall back further. 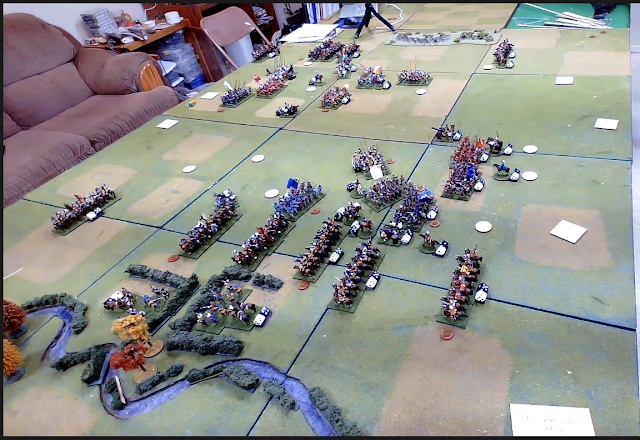 I press forwards with my support line. 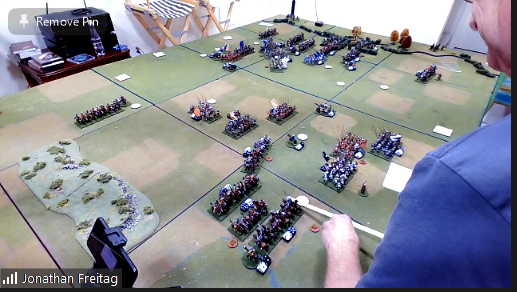 Phil is close to a big breakthrough on his flank. 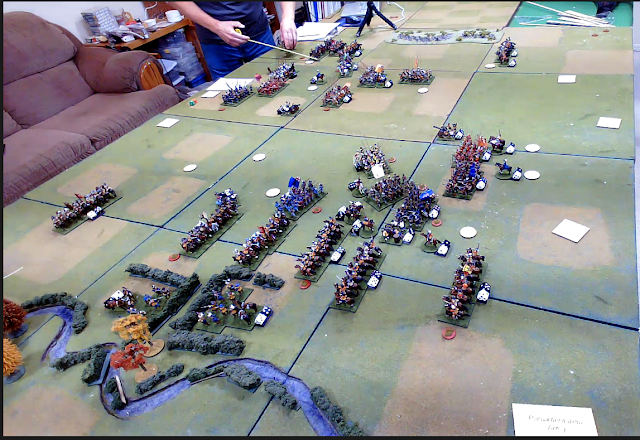 In the distance Phil's infantry is also breaking through. 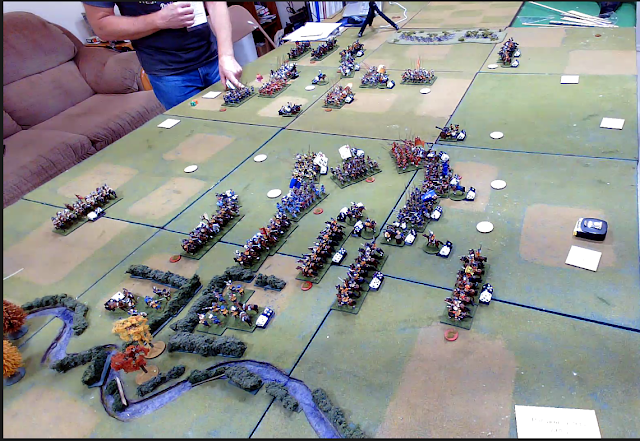 Will throws in the rest of his infantry and drives Richard's men back. 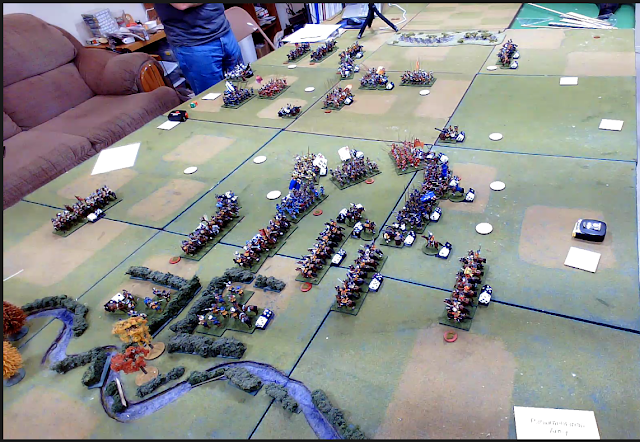 Phil has destroyed the Royalist left flank, and Will and I are driving forwards on our own left. The Royalists are in full retreat. Game over.
An excellent game, and a good debut for Jon's basement in the Monday Night Group setting. All his worries about wi-fi signal and the difficulties of running a game came to naught and we all had a great time.

The rules were Jon's own home-grown set "A Reign Cut Short", and played really well. I think there's a lot more depth in them than we managed to drag out on the evening. My only critical comment is that there can be a little too much dice rolling (says the man who has written some BOD games). You roll to hit, then roll for reaction, then (if the reaction is unfavourable), you roll for the distance you retreat. I would drop one of those sets of rolls - almost certainly the random movement roll - but then I'm not exactly sure what Jon wants to see on his table, and if it works for him, who am I to argue?

Jon has offered us more ECW, which would be lovely. Some whispers of some refights too. Excellent.

* Which does make me wonder about where he used to work.....