The week before last Graham Fordham died. One time Committee member and Treasurer of the Society of Ancients, regular at wargame shows and in competitions he succumbed to cancer, compounded by a series of strokes on the 9th July. He was 64. He leaves a wife, Alison, and a teenage daughter, Tamara, who were with him when he died. Both will be well known to show attending wargamers as well, with Tamara being a very fine DBA player.

Graham was one of the four "Northamptonshire Grahams", who together on one occasion with the  "Three Chrises" famously played a game  together with a Phil and a Will. We were apparently victims of the infamous county bye-law that rationed first names or required that they rhymed.

Graham was not a regular opponent of mine by any means. Our wargaming interests did not overlap significantly until I started to dabble in the Wars of the Roses due to the Northamptonshire Battlefields Society, of which more later. I last met and spoke with him, at the Alumwell show in March 2020, the last wargames show before this wretched pestilence blighted our lives. It was the first time he had been out with our full Edgcote model, for which his "Fluttering Flags" had provided the banners for both armies. The picture above was taken there. Phil and he had, together with Alison and one of the Chrises, travelled the world attending the World Wargames Championships as the SOA Ancients Competition Team, so this wasn't the furthest wargaming trip he'd ever made, although sadly it was his last. This was one of the few occasions since I'd started doing show stands with Phil where Graham was a full day helper. Otherwise he could always be relied upon - in between competition games of Bolt Action - to turn up and sit on the stand and provide cover for a break for one of us. It was also a convenient location for the Fordham family to meet up and stash their various coats and luggage and purchases for the day. When he travelled with us he could always be relied upon to provide a large catering jug of coffee, which, alas for me, I do not drink.

His funeral was held this Tuesday, and was attended by not just family but wargamers from round the country. More would have been there if they could. Our friend and MNG regular, Ian, travelled up from the West Country to do the service. Eulogies were given by Graham's brother and Phil, who spoke  eloquently and with humour about their shared love of wargaming and how Graham and Alison had met. Will, who gave the reading, finished it with a request that Phil's remarks should be published in Slingshot. Ian commented, in his reflections, that in the situation described in the Bible passage, Graham would have devised a plan and had a go.

There are things you learn at funerals, or add to your knowledge of people. Wargamers can know one another for years, know everything about their armies, but not know the name of their spouse (if there is one), if they have children or what they do for a living. I knew Graham was a chef. I didn't know that he worked in a Michelin starred kitchen, nor that he and Alison once ran a restaurant together. I didn't know his passion for cookery started in school, although I did know he joined the Royal Navy as a chef. I didn't know that he volunteered for the Royal Navy Display Team, and amongst other things that meant taking part as a member of the Field Gun Team squad. Nor did I know that he loved football. Luckily for him the last game he watched on TV was the England / Ukraine semi-final, alongside Phil.

The service ended with a photo montage to music. I'm proud that the photo above featured in it, as it captured Graham, alongside his closest friend, Phil Steele, doing what they both loved, and what had brought them closely together. It caused a few manly tears to be shed. As Phil remarked, that was when it really hit him that they would not be making any memories together.

After the service there was opportunity for reminiscence. Phil reported that Graham's painting desk had uncompleted figures on it for his Wars of the Roses army. Not finishing your lead pile is no insurance against the Grim Reaper. Graham had a great love for the medieval period and heraldry. His and Alison's wedding was medieval themed, and Tamara was named, I think, after the medieval regnal queen of Georgia. As for the heraldry, Graham researched the coats of arms for the Battlefield Society's posters for the Battle of Northampton (also used in our 1460 Game), and would happily talk at you on the subject for long periods of time. I know he did me.

As it was a Tuesday, we were due a wargame in the evening. Some of our members were unable to attend, due to their close involvement in organising the service - Ian would have been on a train, heading back West, and Will and his wife have been fully involved supported Alison and Tamara through this difficult time. The rest of us kicked around the idea of postponing it, but I took the view that if I knew anything about Graham at all, it would be that if you could play a wargame then you should do. So we did. 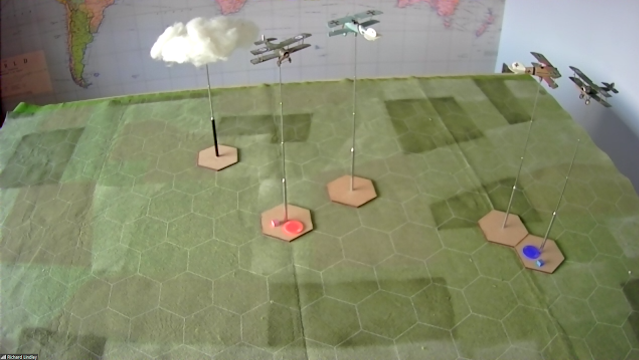 We fought an epic and tense two hour plus dog fight, in which lots of damage was inflicted, especially on Steve, but no one was shot down, and the game ended when Jon & I had to retire as we had run out of ammunition. I remarked, not for the first time, that I am never playing the game again having lined up several close range shots, three of which missed completely.
But in the great scheme of things that doesn't really matter. One of the great things about wargaming is the friendships we make a long the way.
Farewell, Mr Fordham. Rest in Peace.