Five years ago or more I developed a set of card driven quick play rules for ancient games. The first version was called "Rapid Raphia", and was well received. It never really took off, and my interests went elsewhere. However, I was still quite pleased with them. When West County Richard last visited he was talking about the next Society of Ancients conference and I didn't have anything to offer. Perhaps these might fit the bill.

Question is, are they actually any good still? Well, to find out I thought that I'd better get them out and have a go. Luckily, MNG member Chris A was off work this week, and was coming round to take some unwanted storage off my hands, so he stopped by for a game. 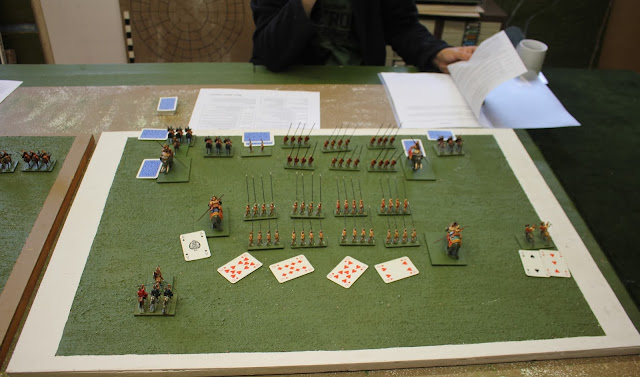 We played Raphia again. I got Ptolemy (bottom of picture) and Chris was Antiochus. I won the initiative first move, and pushed across the board to get my phalanx engaged asap.
In "RR" each player gets a deck of cards each. They are played blind, at first, and the cards you play give you movement and also count for combat. Some of the niceties are that for some troop types only one colour card counts for movement, whilst the other counts for combat. 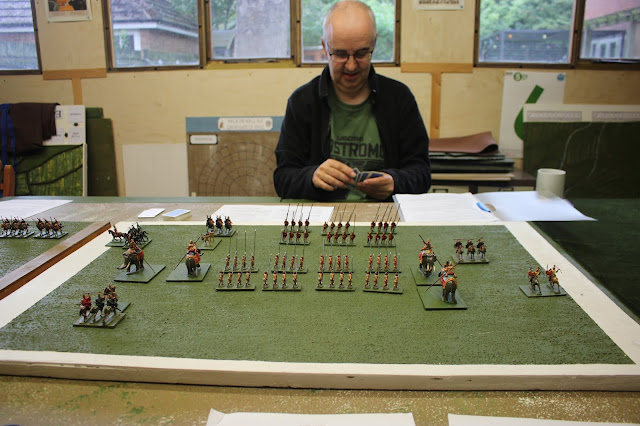 The game system gives a lot of decision points and choices. Winning the initiative can get you on the front foot and dictate the pace and direction of play, so won't necessarily suit players who prefer to be reactive. Chris is being thoughtful here. 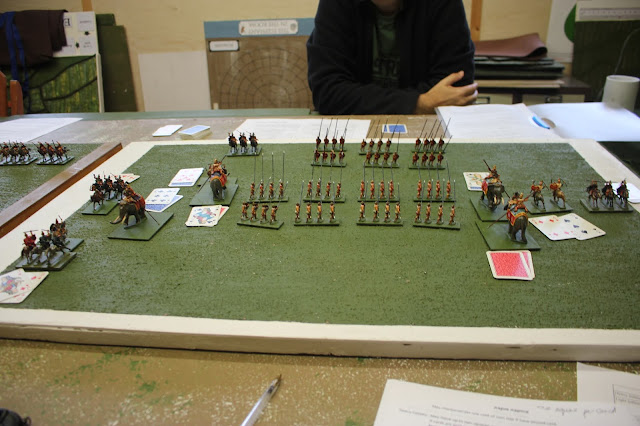 Chris went for a centre refused/dual flank attack approach.  This works for Ptolemy, as the phalanx is the strong point. You just have to hang on to the flanks. 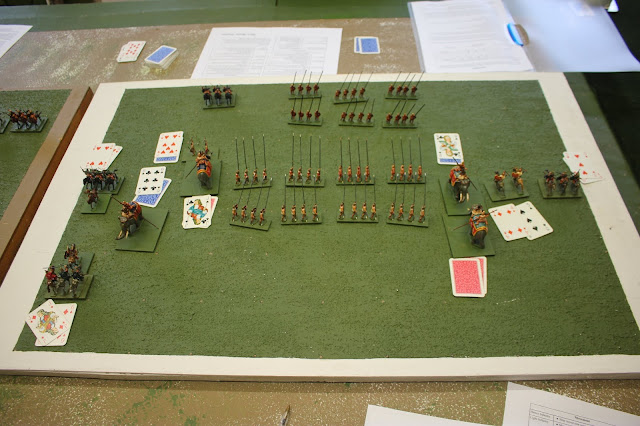 As you can see, when Chris had the initiative, lots of action out wide on both sides. 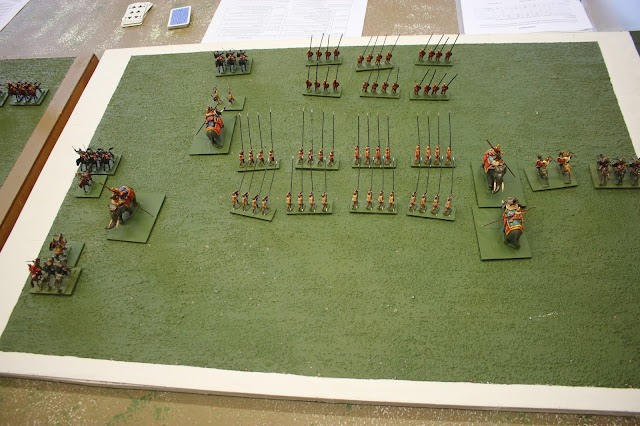 Not so bad for me, however, as I'm keeping his manoeuvrable troops away from the phalanx flanks. 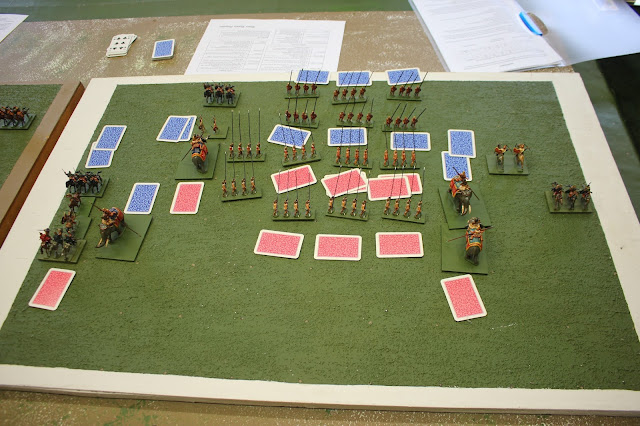 Next turn I went for a big push in the middle. Being on his base line means if I can push units back and off the table they're lost. 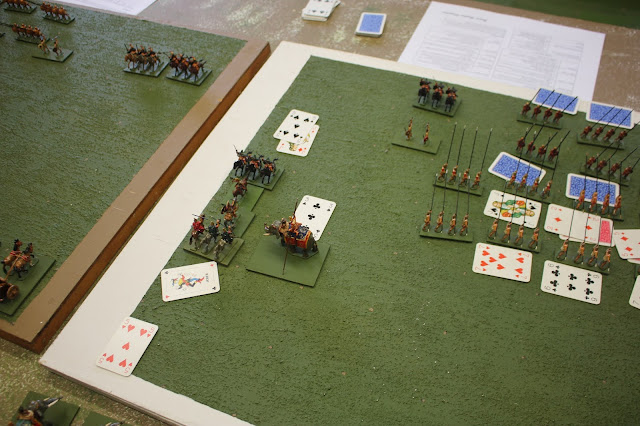 On my left, I'm a bit exposed as Chris' elephant gets in on my General and his Companions. 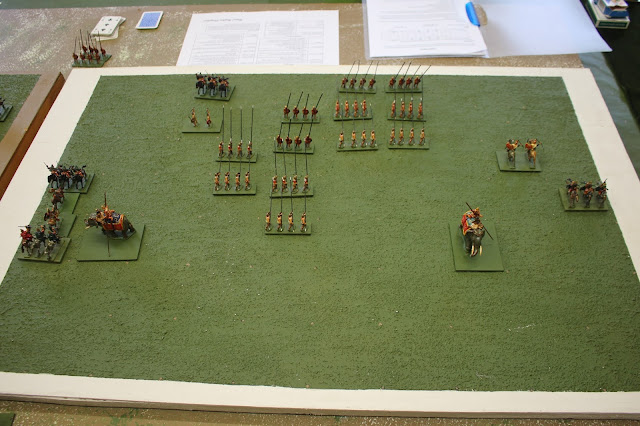 Things were going okay, however. I lost an elephant, but drove two pike units off the board. 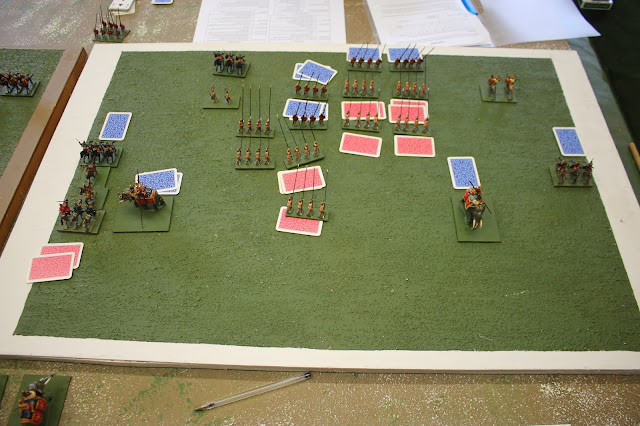 Next turn, same again. I just need not to die on the left, so high value cards going in there to shore it all up. 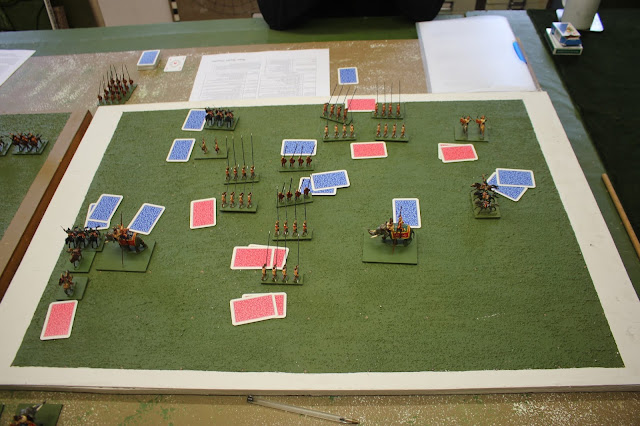 Two more pikes bumped off the table, but my Companions have been destroyed. Chris has a pop at Ptolemy, but he makes good his escape (or at least, will do). 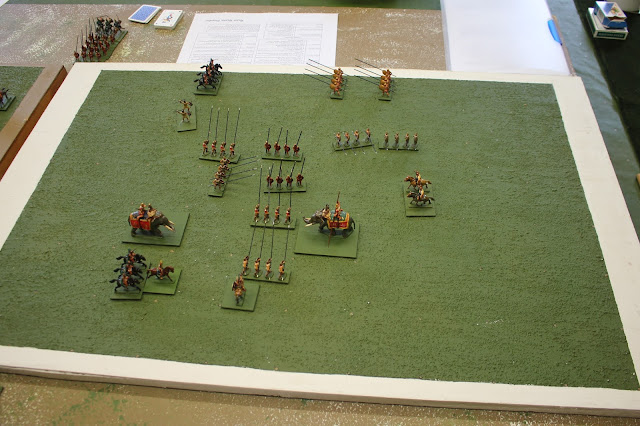 We swinging around for the final phase of the battle. I'm ahead by a unit or two, so it is looking okay. One more, and Chris has to take an army break test each turn. 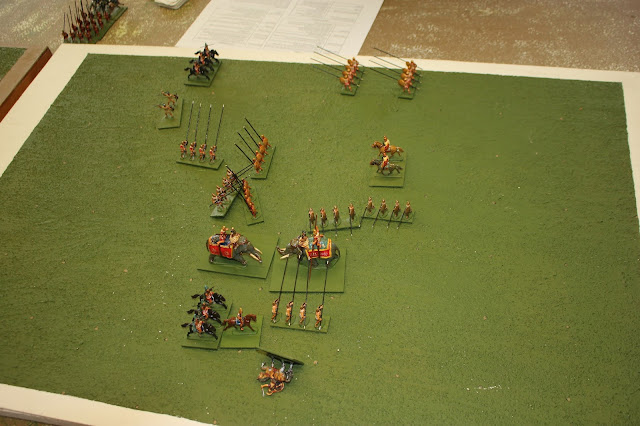 Alas Chris is able to attack my General again and he dies. This triggers another army break test. A card is flipped, and the army breaks and flees.
It is playing really well. A few notes to tighten up some of the wording, but generally a believable and challenging game. It took just under 2 hours, so not the fastest of fast play, but I'm re-learning and Chris is learning from scratch.
Having tried it once with an encouraging outcome, I had another go, this time across Zoom, with Jon. 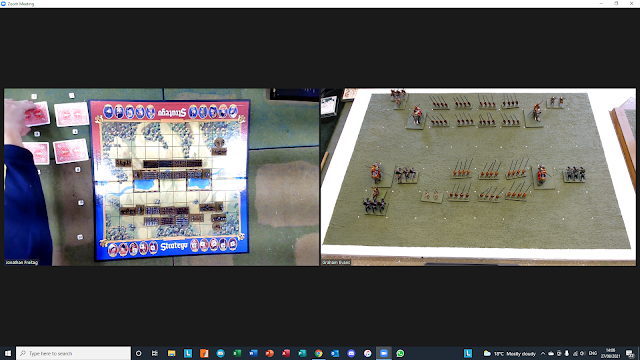 To keep track of what is where and the cards played, we each set up a board (same scenario). Jon is using Punic Wars 6mm figures on a Stratego board. He's using number chits to keep track of what cards are being played on what.
I'm Ptolemy again, at the top of my picture on the right. Both boards are aligned same way round in the pictures. 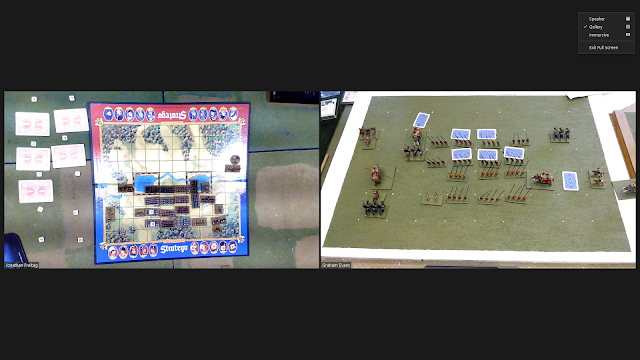 I have the early initiative, and I'm going for it again in the centre. Jon, cunningly, is refusing to get caught on his base line.
This time round the wings are a lot quieter. Keeping the initiative, I make use of the bonus move allowed to get up and in the flank of the enemy phalanx with my elephant. I haven't got the sequence of play exactly right to make this truly devastating, but it looked pretty good. 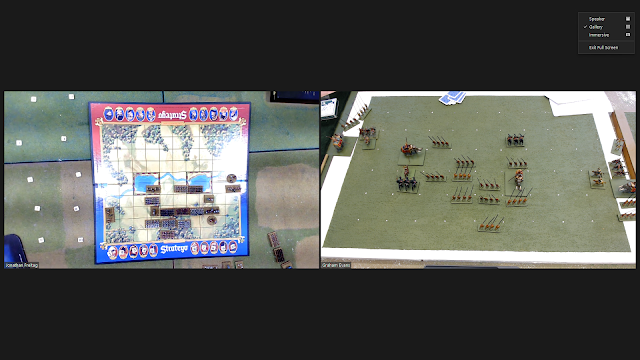 I'm well ahead of the game at this point. I've killed 5 of Jon's units to 3 of mine. One more, and he's taking break tests. This is partly due to my clever placement of cards to attack Join's units without them, which means they can't defend themselves. 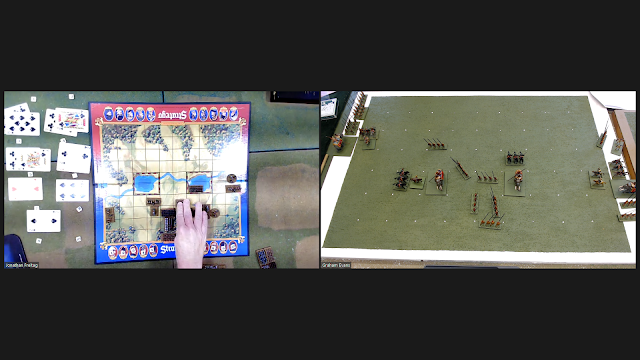 As a Hail Mary Jon chucks in a King (important card) to win the initiative, and so determine the sequence of combats. If he can get this right he might just be able to get his kill count up to 6, and keep as many of his units out of my clutches as possible. 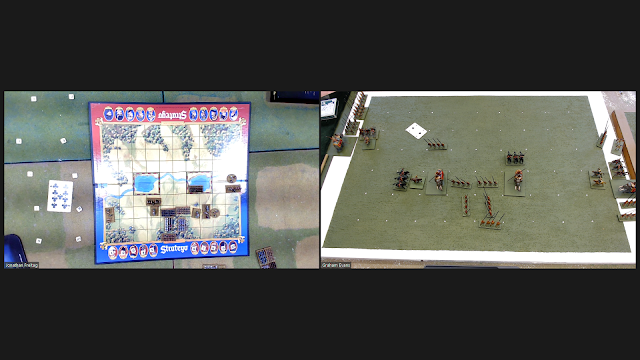 His tactic works, and he gets me up to 6 dead 'uns. However, I get one as well, so we are both at army breakpoint. We do a break test simultaneously, flipping the top card of the deck. If it is less than the remaining units (6 each) the army routs. I get a 2, and Jon gets a 9.
B*gg*r it. Lost again.
Jon said he enjoyed it, and will play again if we can find a slot. This is not really a Monday Night Game. It is strictly a two player as opposed to a multiplayer game, so won't translate to that environment very well. It is certainly a nut cracker of a game, which requires a lot of thought to make the right decisions. It has bluff and risk tasking. I reckon it's a cracking little system.
Hopefully coming to an Amazon store near you soon.