Back up in the air

Time for us to revisit the Western Front air war. If you recall in the last game I'd made a hash of flying the new Fokker Triplane, landing in in a field with heavy damage, but walking away unscathed. Now we were back the following day, and the British were on a special mission, using a 2 seater, escorted by a couple of fighters. 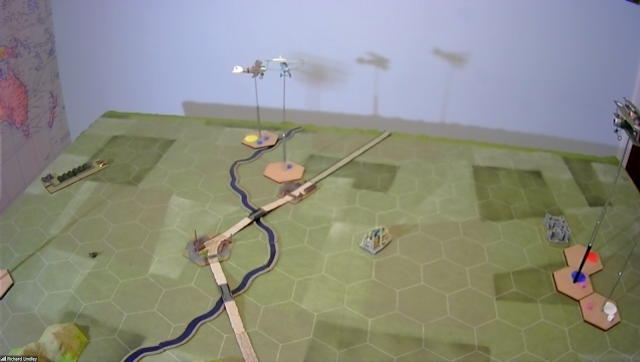 Jon, Chris K and I had the Germans. Jon is off picture to the left. The British were Ian and Richard, with the 2 seater flying a pre-programmed course. I'm in the light blue Albatross DV. What are the British up to? 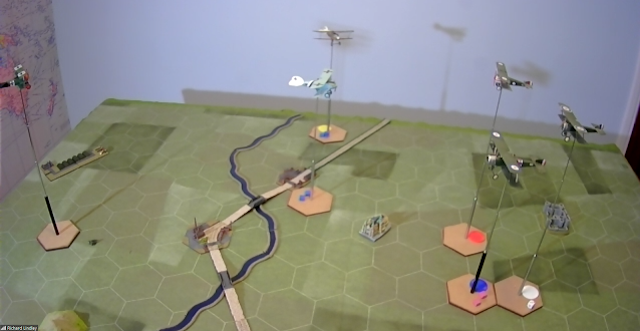 Jasta leader von Freitag appears in a new Fokker. I started to climb, (blue cubes) then noticed the 2 seater was diving (pink cubes). I signalled my colleagues I was going after it. 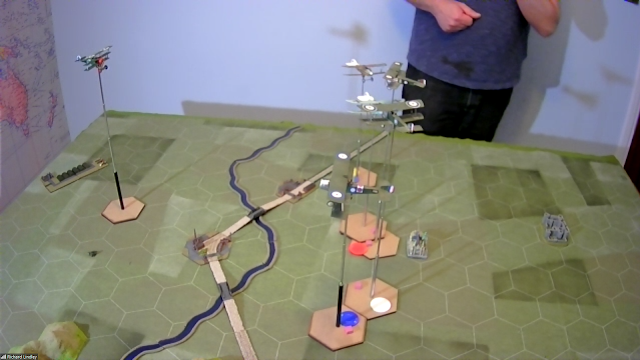 It's all getting a bit busy, as I start to dive, and navigate past the escorts. I need my companions to take on the fighters, or they'll be on my tail sharpish. 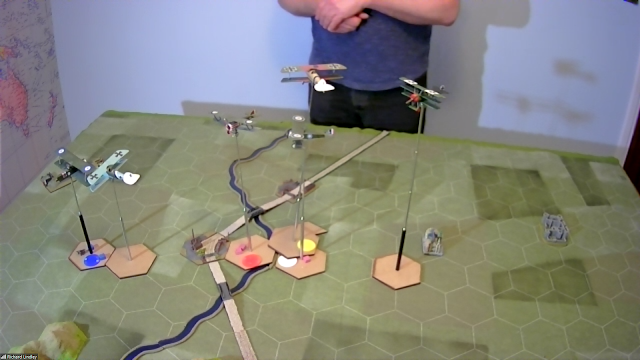 I've got down to the level of the 2 seater. I am told it's doing photo recon...of my landed Dr1 from the last game!!! (see small aircraft model on its base). I'm also in close, and give it a burst of fire. The escorts are dropping a level too...I need my colleagues to start diving, not hogging the cloud line. 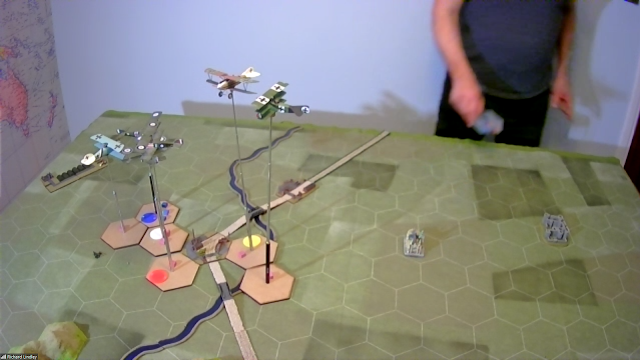 I'm now in on the observer/rear gunner, and Chris and Jon have started their dives. The 2 seater is starting to climb...but I've shot a lump off it's tail, so it is struggling to do so. 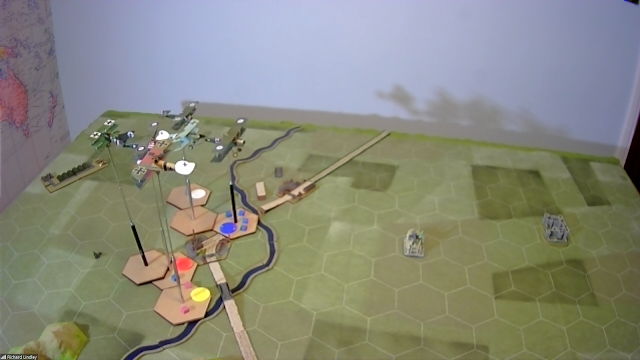 I'm on its tail, flying level, gambling I can shoot it down before it climbs above me. 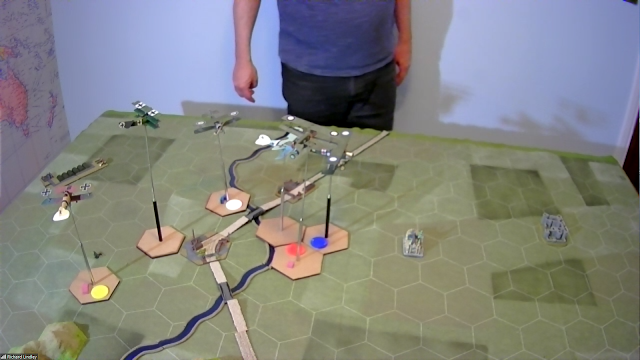 The target is forced to level off, and I keep on its tail. Elsewhere the rest of them are all over the place. I take some fire from Richard, I think. 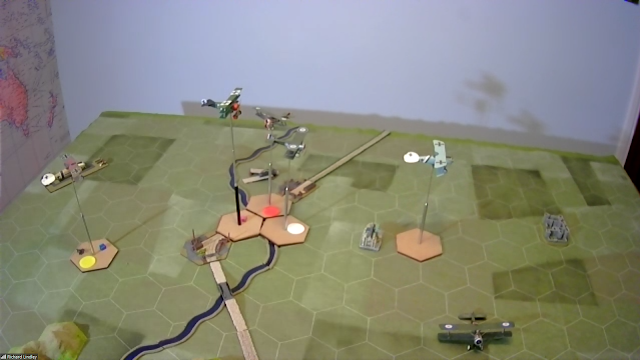 More damage forces the 2 seater into a spin, and it crash lands. Richard is now on my tail, and I'm starting to feel the effects. It would really help if the rest of the Jasta could get lined up and shoot at the escorts a bit. 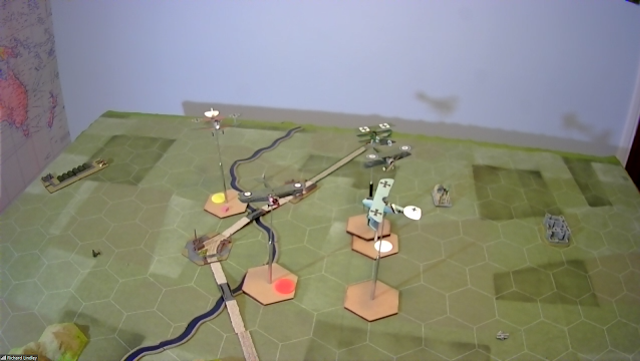 My single mindedness has got me in a bit of a fix, as I try to turn back to the airfield and avoid the escorts. My colleagues seem singularly unable to close with the enemy. NB I now have 3 kills, so I'm approaching Ace status. I really don't want to get shot down and be killed now. (BTW you can see the large 2 seater model on the ground has now been swapped for a mini-plane). 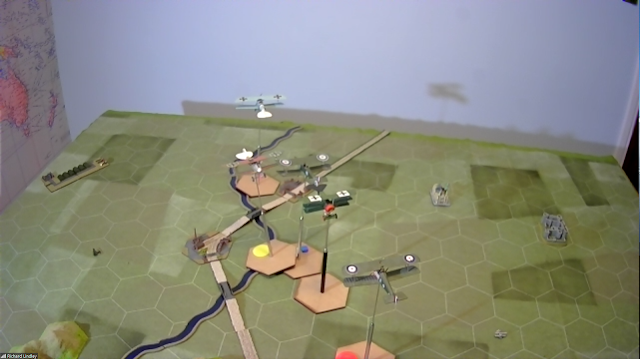 I manage to break through the swirling mass of aircraft, as Jon and Chris finally line up shots on Ian. Richard, however, is on my tail. I loop over to face the pursuing Richard, but surprisingly he turns to the right, heading for home. Chris has gone nose to nose with Ian, and stuck a couple of bursts into his engine, which stalls and starts to smoke. 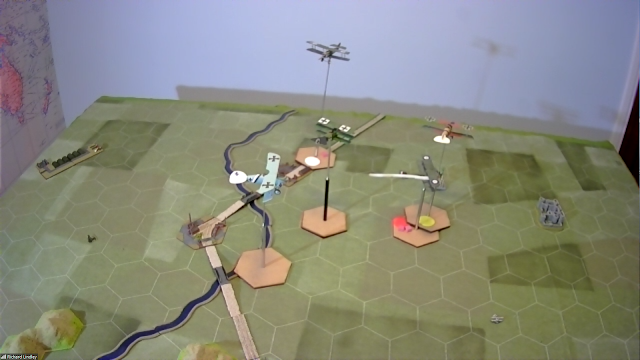 Ian's plane is diving, as he circles round, hoping to land and restart his engine. I've evaded Richard now, so this looks like a comprehensive German win.

In the un-screenshotted end game, Ian landed, and survived. Chris circled down to machine gun the crashed British recce plane, then crashed himself, clipping a tree and ripping off his wings. He has survived the crash, losing an eye and gaining a limp. He claims he will fly again. I got behind Richard, but he kept climbing out of reach, which was fine by me. I didn't want him to turn and get on my tail.

All set up for a rescue attempt on Ian and the surviving crewman from the 2 seater. Watch this space...