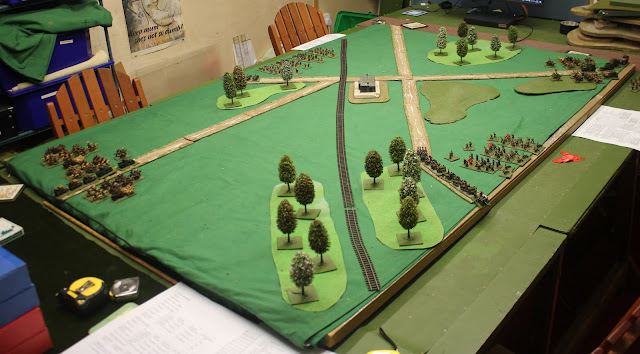 The Reds and Whites are both heading for the station, but mainly they need to smash their opponents. The Whites are marginally stronger on the table, with an extra infantry battalion and cavalry regiment. However, the armoured train "Победа*" is in the vicinity, and is steaming to the aid of the Reds. Both sides have some artillery, and some armoured cars and other bits and pieces.

The Reds are on the right, and were pushed round by Chris K on the instructions of Richard's MNG and SOA. The Whites to the left were commanded by Ian and Jon, and moved by Phil and Tim. 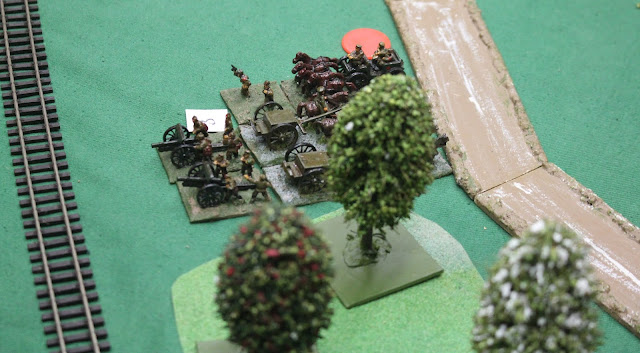 The Reds got the initiative turn one, and rushed up their guns and deployed them. 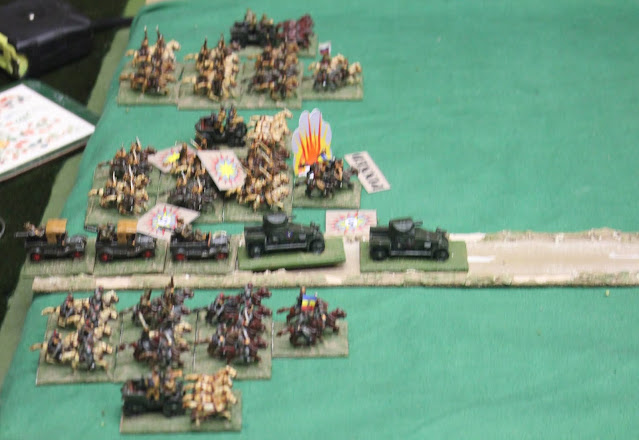 They then opened up on the White cavalry over on their left (bit of a wobbly picture, I'm afraid, but the only one I have). 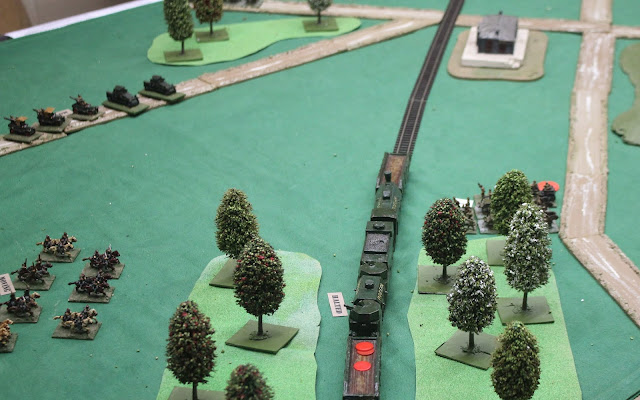 The Whites moved their armoured cars and MG trucks up the road, and ordered one of the cavalry units to move in on the woods on the Red left. Just then, earlier than expected, the Armoured Train arrived.

For game purposes, the only bit that counts is the gun car. The rest is window dressing. 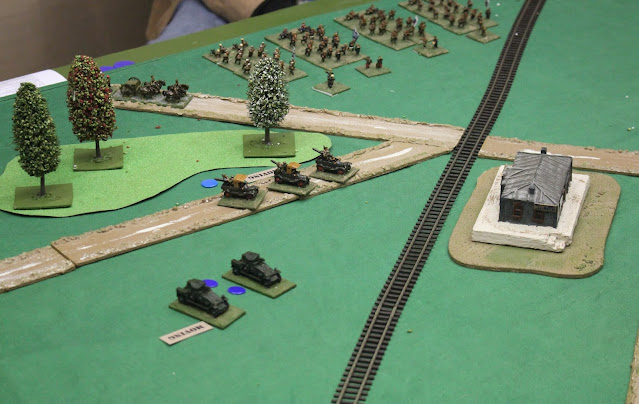 The Whites then move their motorized section into the middle of the board. In common with earlier games, their slower moving infantry is standing on the baseline. 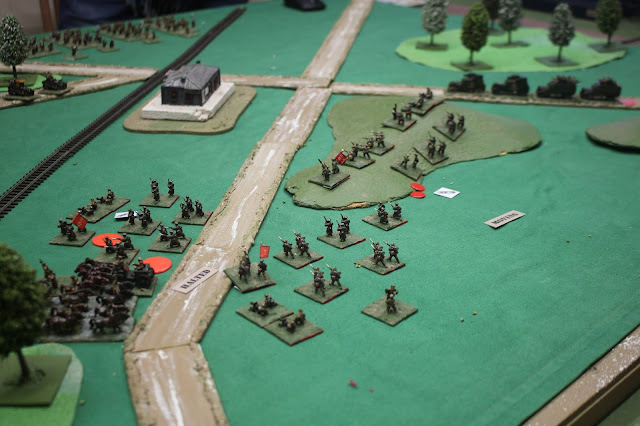 The Reds deploy their infantry into skirmish order, and move up, accompanied by their motorized section, which includes an extra infantry battalion in armoured trucks.. 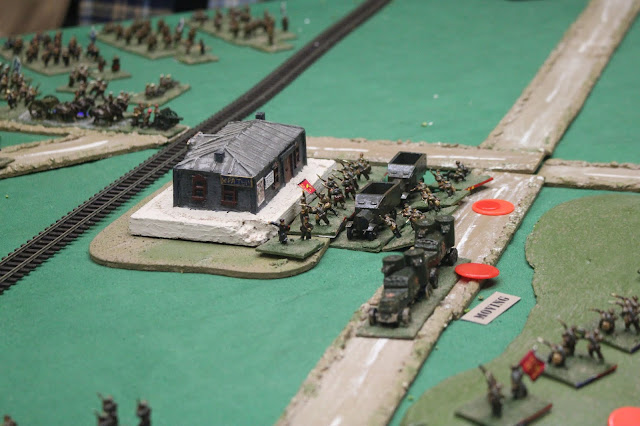 The motorized infantry rush forwards and move into the station. 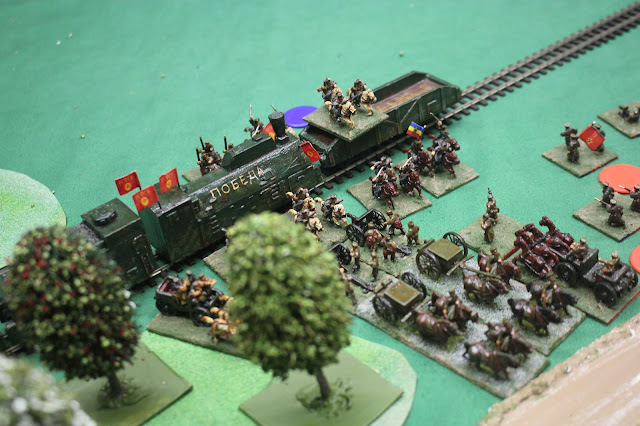 The White Cossacks charge the Red Artillery. The train has now acquired its identifying flags. 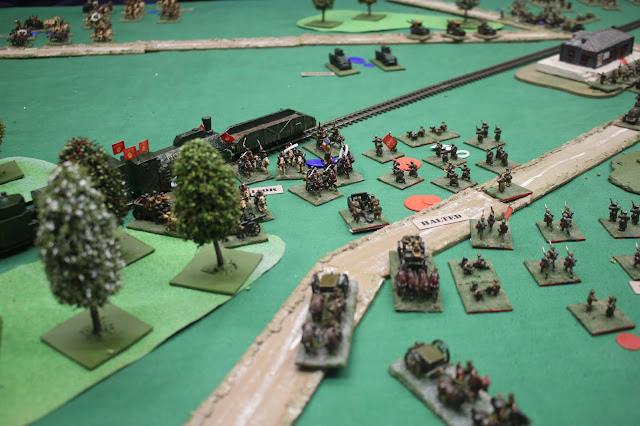 Despite firing at point blank range, the guns cause insufficient damage to stop themselves being overwhelmed. 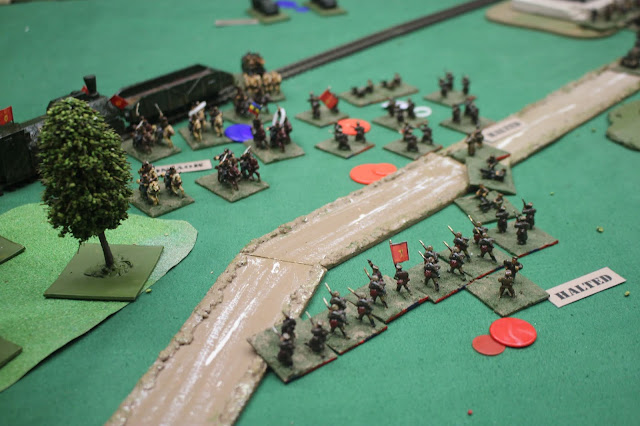 The cavalry, alas for them, have shot their bolt for this turn, having used their three activations. One unit of Red infantry forms up and opens fire. They cause a lot of damage. 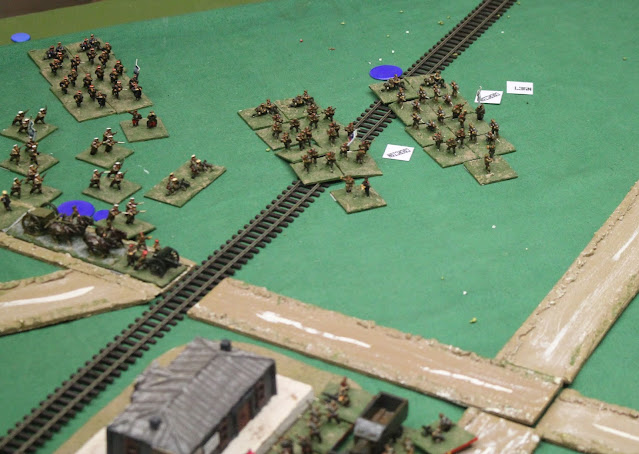 The White infantry move off, although a little reluctantly at first. 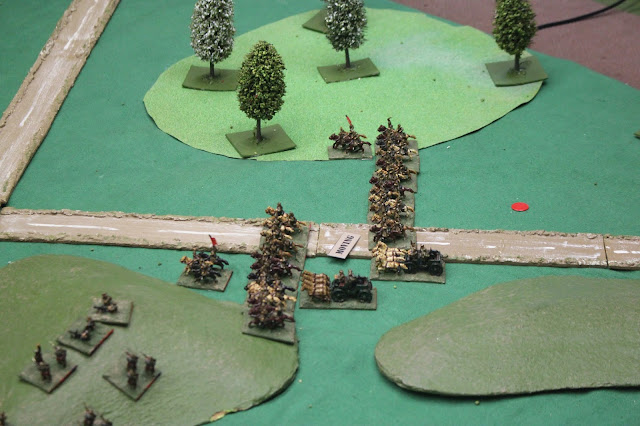 The Red Cavalry form into line, and start to roll forwards. 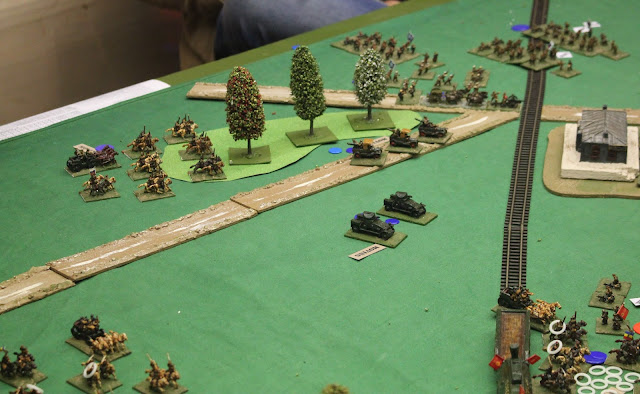 Jon moves his other unit of Cossacks along the back of the table edge. Everyone is really worried about the armoured train, and its two big gun turrets. 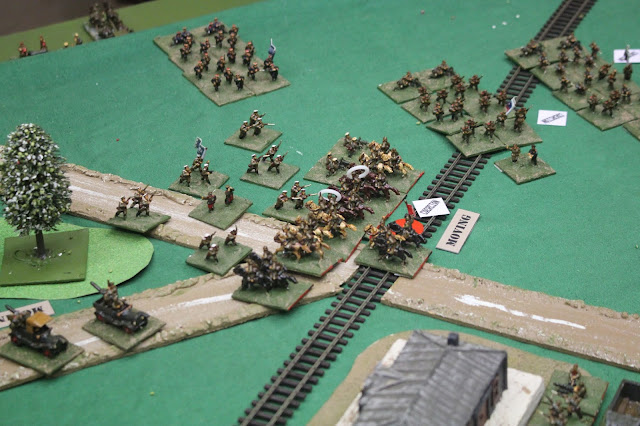 Richard MNG launches his first line of cavalry in a charge at the artillery accompanying the elite white-capped enemy infantry.  They destroy the guns. What could possibly go wrong? 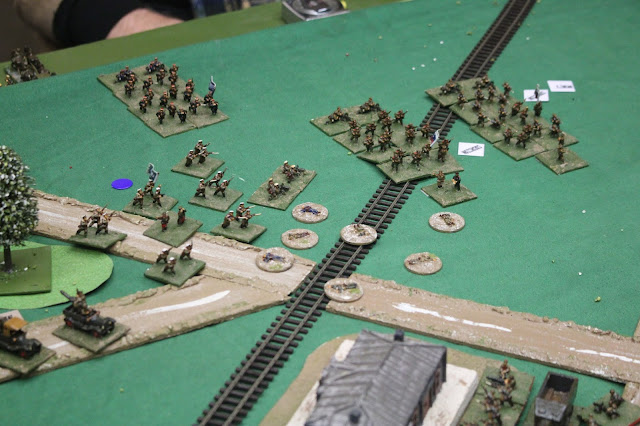 Pretty much everything. A round of close range fire from the White Caps effectively wipes them out.
Lessons we are learning: Being near infantry in the open that can shoot at you isn't a recipe for a long and happy life. 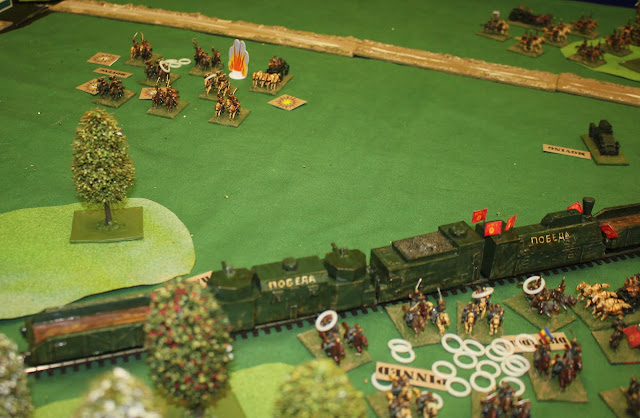 The train opens fire all round. The cavalry near the camera have so many unallocated hits there is probably no way back for them.
(Note to Red player: whilst it was effectively a Zombie unit and could do nothing, it still earns an activation card for its command phase. All that is needed here is for the infantry to follow up onto the position.) 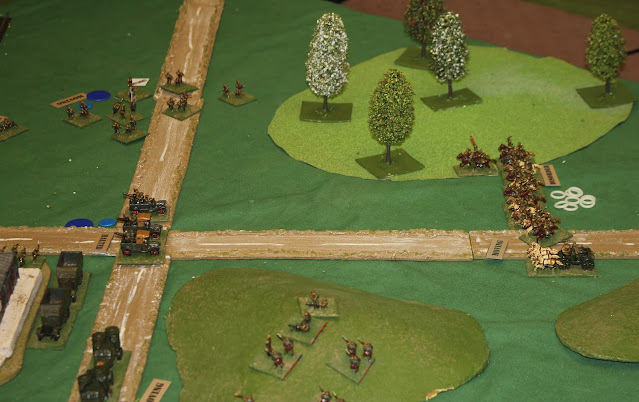 Jon has put his MG trucks on the cross roads to dominate the centre of the board. 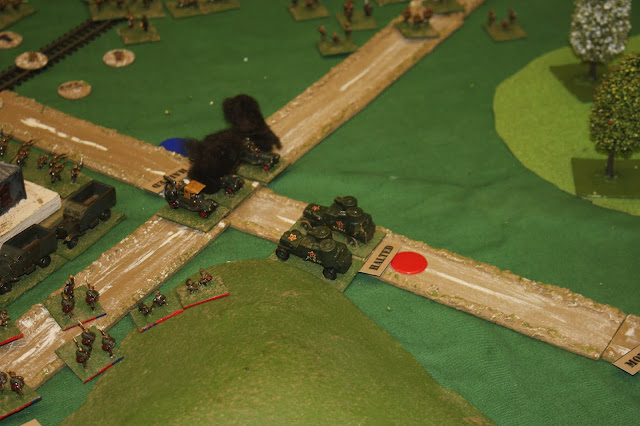 All well and good, but the Red armoured cars hadn't had their activations. Their concentrated fire did a lot of damage. 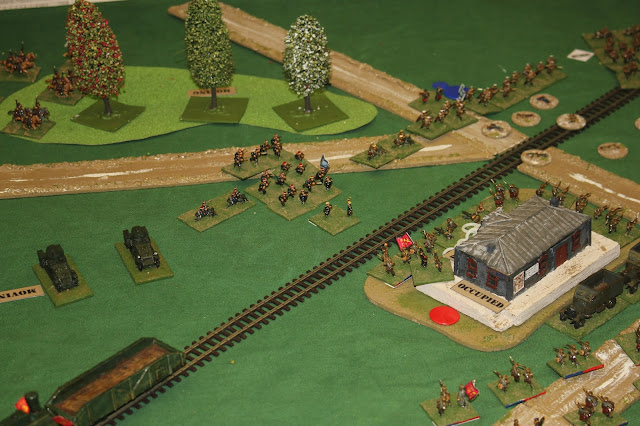 The Whites moved up on the station, and subjected it to some heavy fire. 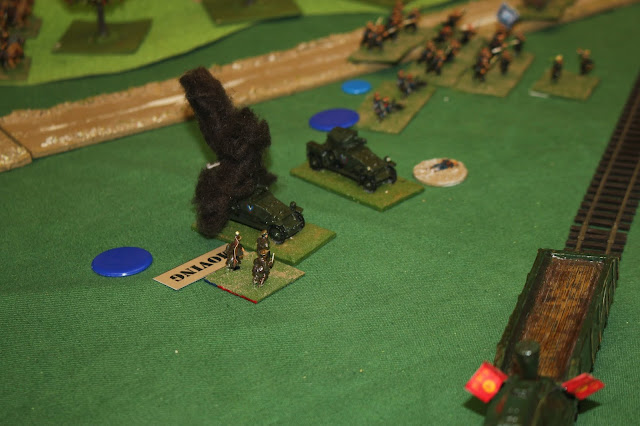 The brave martyrs of the Revolution close assaulted the White armoured cards, with mixed results. 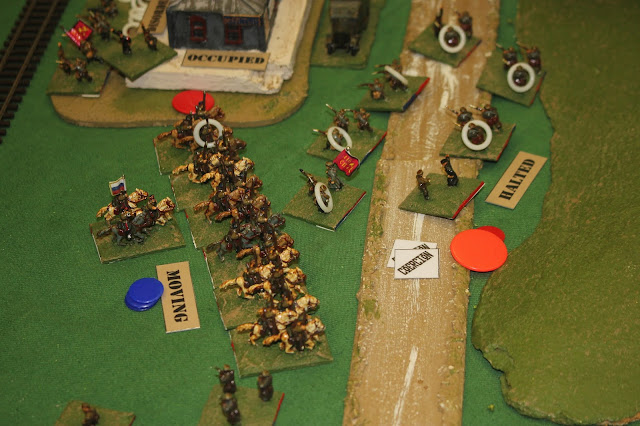 In preparation for the attack on the station, the White cavalry cleared away the Red infantry supports. 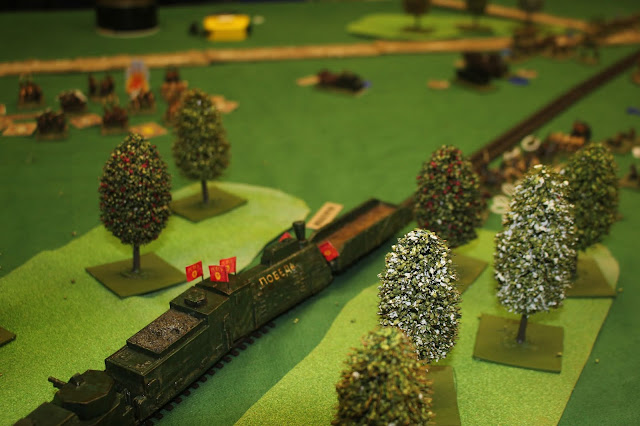 And then, as the turn closed, the train slowly started to steam away, called to responsibilities elsewhere.
Another game with a lot going on. Multiple cavalry charges ending in bloody ruin, exploding vehicles and massacred artillery men. The game certainly doesn't lack for incident.
The first run out of the train went well, but there is still work to do there. Some of the other bits and pieces need attending to as well, and I know I got some of the NYET/DA! / Coercion sequence wrong at one point. I think as we carry on with this series of games we will see styles of lay evolve, and games may become less frenetic. I think players need to get their infantry more involved, and wean themselves off chucking all of their activations into mobile troops that then run out of steam and end up out on a limb.
There's already a battle report up on Chris K's blog, which you may like to have a look at. You'll find it here.

* That translates as "Victory". I chose that as a name as it can then be used for both sides. I can't see the Whites using a train called "In honour of Comrade Lenin"