After a hiatus last week we were back on the Western Front for another of Richard's continuing series of aerial combat games.

After the last game the British aerial reconnaissance teams had been shot down whilst on a secret mission. In a desperate attempt to recover the pilots and the film, the British have sent out a rescue mission of two Strutter two-seaters, supported by some fighters. Can the fiendish Hun thwart the brave fellows?

Speaking as a fiendish Hun, I hope so. 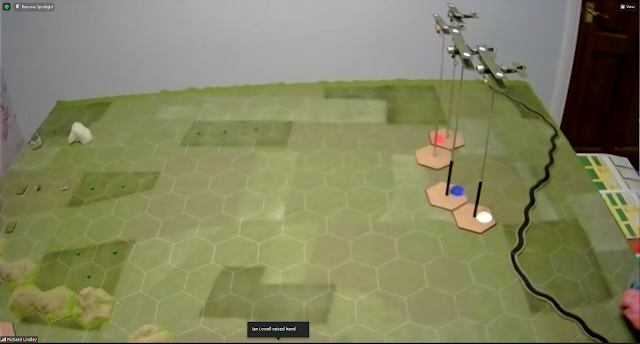 The British wing arrives. They don't know where the downed pilots are. They're hoping they're in or near the dark green areas, as those are the places it is safest to land. Time is against them, as the Germans have troops sweeping the countryside for them. Ian is flying the two Strutters (White and Blue), accompanied by Richard and Steve. 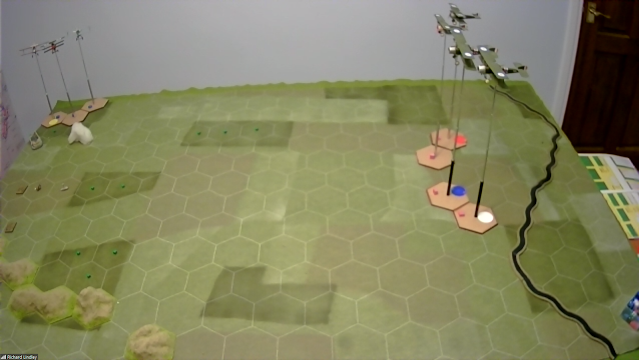 The Germans arrive. Jon is in the centre in his triplane, Chris to his left, me to his right. 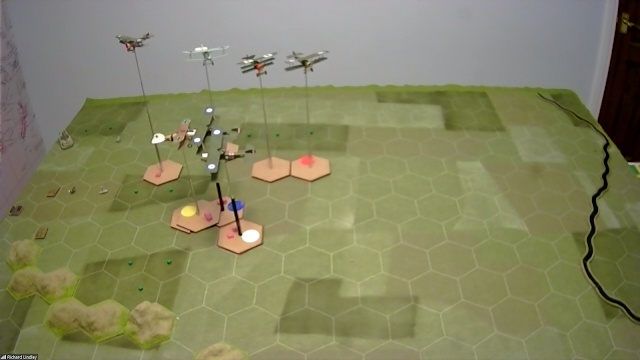 Several turns on, and I (in the White tailed Albatross) am diving to get down to the level of the Strutters. My colleagues are trying to take on the escorts. 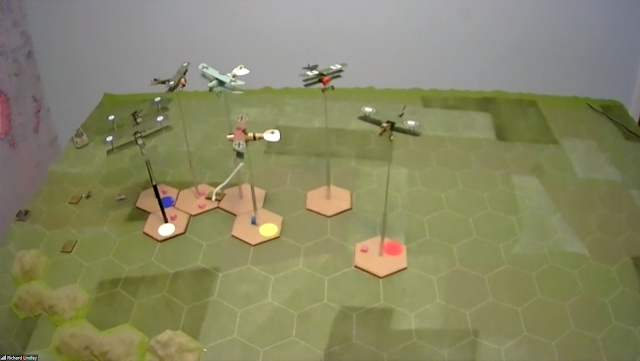 The grounded pilot lets off a flare, so we all know where he is. We are circling round the position. I open up on the white-token Strutter, and rip some holes in his fuselage. Or maybe not. I really need to write these things down as we play. 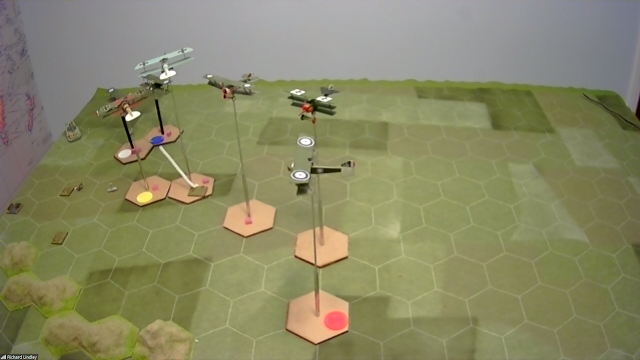 The Strutters have dropped a level below me, so no shot this turn. Everything else is getting a bit cagey. 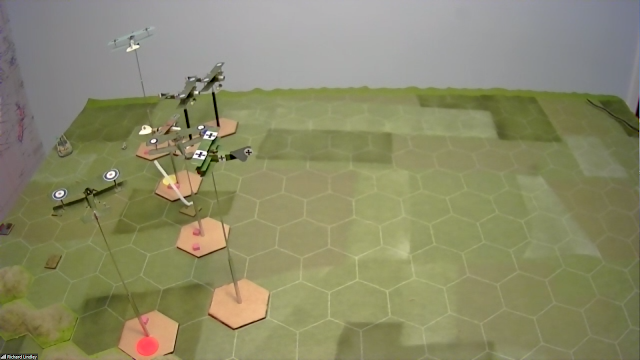 I miss time my turn, and am now on the inside of the Strutters. As we have to dive in order to get down to the pilot's level, there is a danger I will overshoot the rescue planes. Meanwhile Jon has a clear shot on Richard. 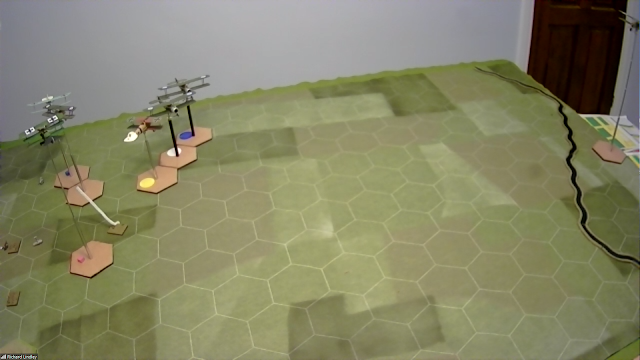 I succeed in turning in on the Strutters, and hit the white one again. Alas a different part of the plane - you really need to pick up multiple hits on the same area in order to shoot one down. Plus I am now flying away from where I want to be pointing. 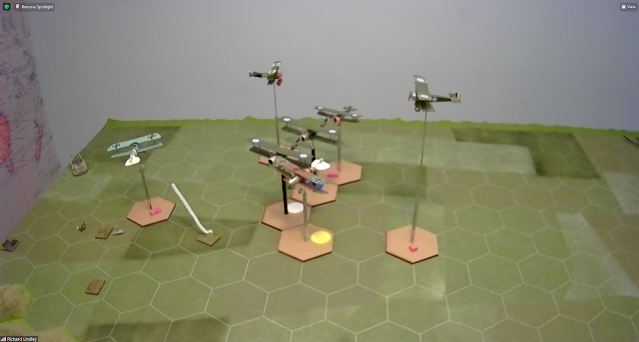 I pull a rotary turn to get back where I want to be, but overshoot the Strutters, who now get to shoot at me. 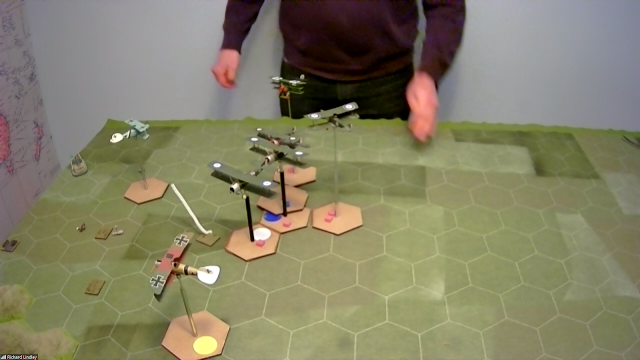 I pull away and circle round, clarifying with the umpire where I need to be and at what height to strafe them when they land. 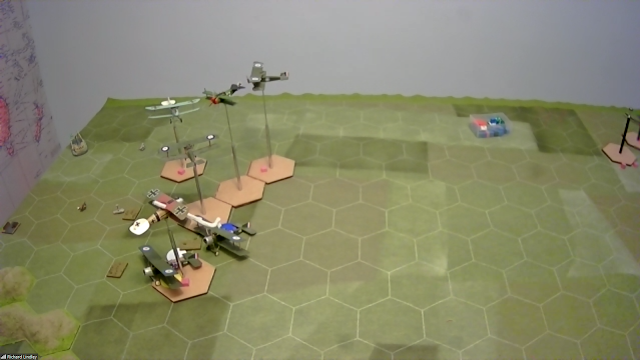 It's all a bit close and tangled up. Richard knocks Jon's triplane off its stand, and it loses its top wing. I run in and shoot up the blue token plane, but only after a near miss as the pilot on the ground fires a flare gun at me. Unusually for Ian, when given a minimal chance of succeeding, he fails to hit me. 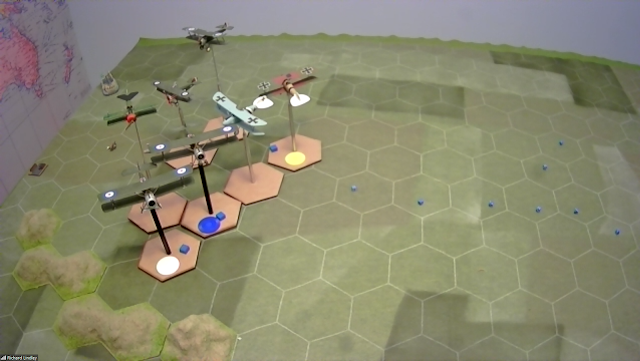 My strafing run now means both Strutters are damaged, and take an extra turn to climb a level. With the hills it'll be a tight squeeze to get up and away. The blue dice mark out the areas where it is dangerous to fly, due to trees. 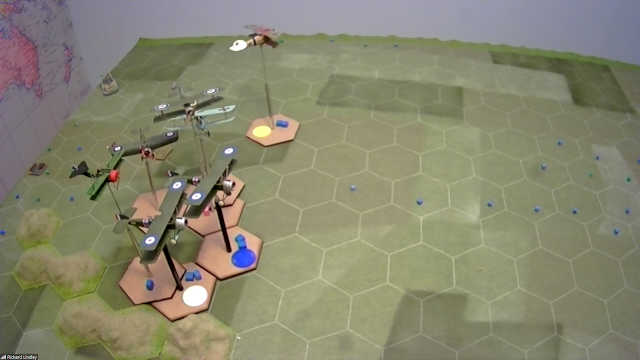 Everyone is diving into and through each other, except for me. I reckon I know where the Strutters have to fly to escape, so I'm circling out to cut them off. 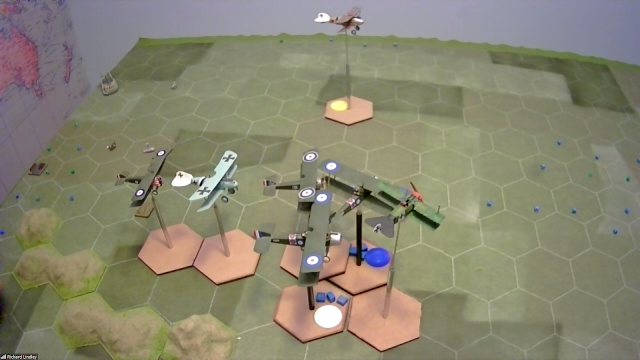 Chris is being tailed, but his pursuer's guns jam. 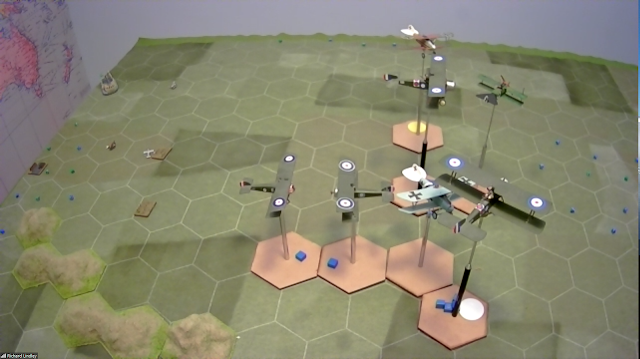 Ian has split the Strutters up, but one is coming my way. Another shot, but a miss this time - unlike the Strutter's rear gunner (now the plane has a crew of two, following the pick up). Jon takes some real damage from the forward guns, too. The triplanes are nifty but fragile. He's going to need to fly for home shortly. Chris has also taken some heavy hits, and is starting to look for a place to land. 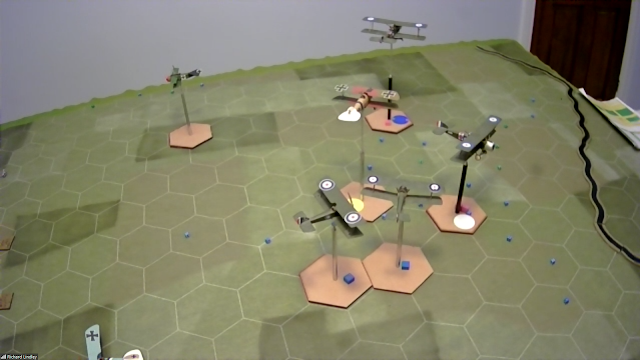 I misread Ian's move, and get caught in a three way shot. Ouch! I was unlucky because I had previously hit the white token plane and put it into a normally fatal death spin, but it being Ian he pulled out of it with ease, and was able to shoot at me instead. Jon, as you can see, has abandoned me, and Chris has landed. A long range shot hits the blue token plane, but not enough to shoot it down. 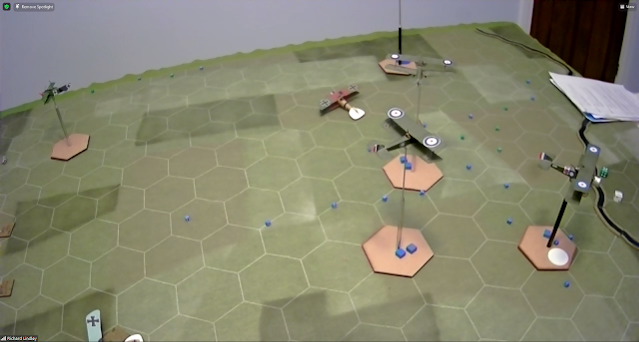 The result of the shooting on me is a pile of wing hits, causing the plane to fold up. This was what we never achieved on the Allied planes, as our hit dice spread them about too much. Jon takes pity on me, and allows me a dice roll to escape. On a 10 he lets me survive, but badly injured. All the Allies claim a kill, but the white token Strutter has to make a forced landing, so I get a kill too.
And the random roll for the recce film turns out with a no usable photos result.
My! What a lot of thrills and spills. By turns this system is rewarding and frustrating, but it keeps us amused for an evening.
Next week, back to Russia.