More Ivan in the Open

After a brief diversion into something that looked like the end of the Great War, we were back to the open steppe for our latest game of "It Rolls for Ivan".

Before I get on with the game, a quick update on the progress of Ivan from table to print. I said earlier I reckoned it would be January, but that turns out to be wildly optimistic. Following Mike Ingram's death and Phil's illness I've taken on more with the Northamptonshire Battlefields Society. My priority at the moment is to revise the way NBS works so it can continue to do what it does effectively and professionally with reduced reliance on single individuals. I can't be the next Mike Ingram and I can't do what he did. What I need to do is revise the way we manage what we do so that we have a solid base for the future, and not just following in the wake of a man who in respect of Northamptonshire's history was a force of nature. My own publishing efforts need to go on the back burner for the meantime. My long stop date for publication is the end of June, so I can run a game at COW, but my preferred latest publication date is the start of May, so I can take copies ordered directly from me to Partizan on the 22nd. Fingers crossed.

Right. The game. We were down on numbers - although we did welcome a new member of the MNG - so I went for a smaller game, with a Regiment/Brigade a side plus supporting units. 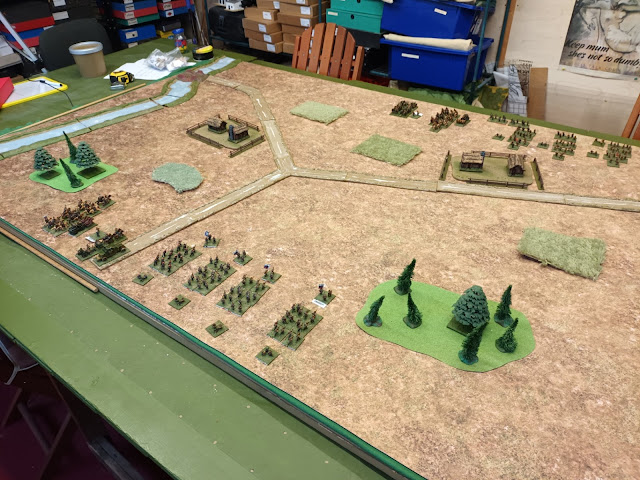 This is what the table looked like, although the units aren't in their starting positions. The Reds are in the distance, and will be arriving across and alongside the bridge. The Whites are about in the right place, only the cavalry ended up being deployed on their right, not on the left as now. Richard took command of the Reds. Newbie Vincent took overall command of the Whites, assisted by Ian who was late to the party. Chris K was in Shedquarters and pushed the Whites around, mostly, until Ian turned up when we swapped sides. 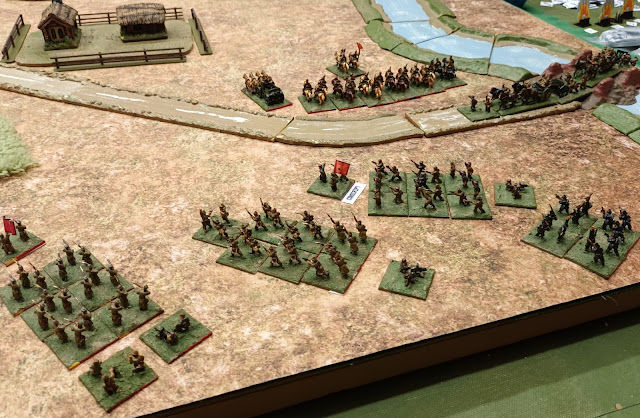 Here are the Reds, advancing on to the table. The aim is to capture the two stanitsas (villages) and defeat the opposing forces. 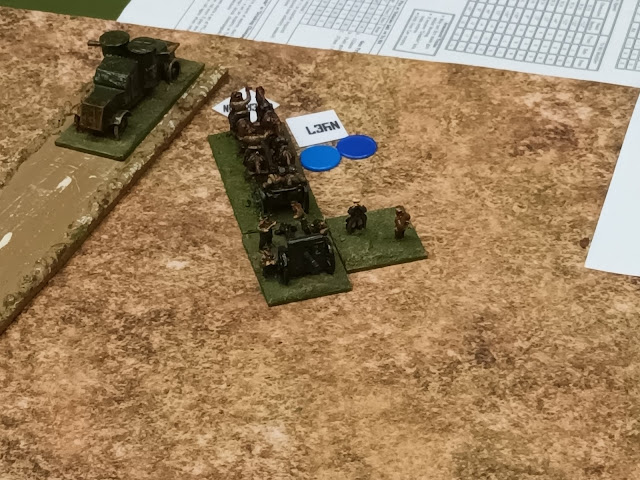 The Whites got their artillery on the board early doors, but once they unlimbered they weren't too keen on doing anymore. 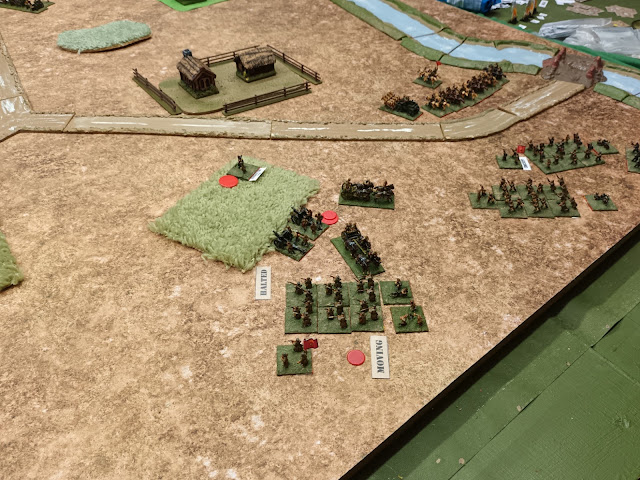 Richard moved his artillery up and unlimbered it, and started to push his infantry up. 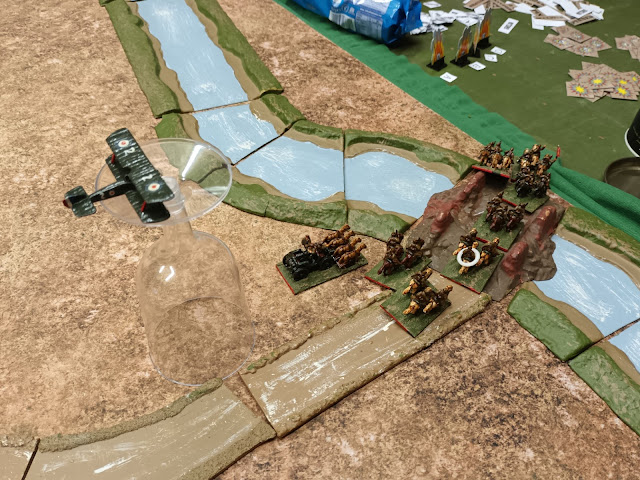 Then the Whites received some air support. Sweeping down upon the Red Cavalry it let off a few burst of MG fire, inflicting a hit. The Cavalry failed their terror test and rushed back to the bridge. 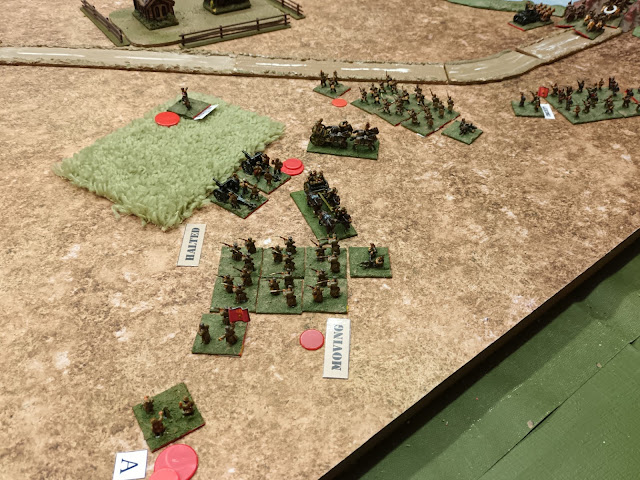 Red Richard responded by ordering a unit to head for the nearest stanitsa. He quickly deployed his light infantry mortar, and opened up on the White artillery. This was a mistake on my part. I applied the rules for the heavy mortars to it, making it much too effective. 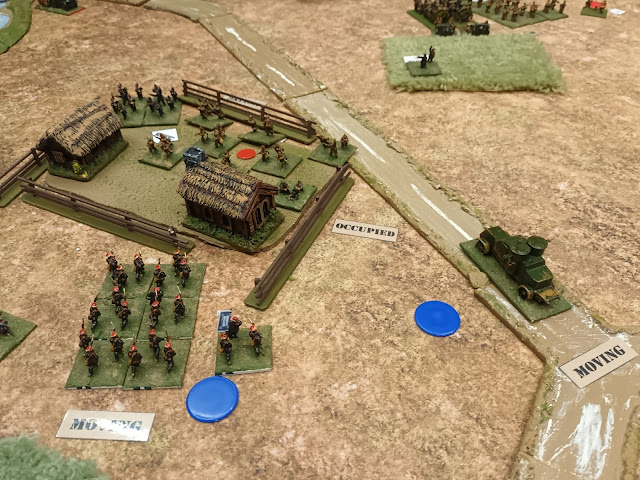 Seeing the Reds occupy the stanitsa, the Whites immediately responded by sending up their armoured car to machine gun it, whilst close assaulting with an Officer battalion. This was also supported by the battalion's machine gun platoon. Despite the Red infantry having "Occupied" the stanitsa, the Whites were in a good position here. All they needed to do was inflict a hit or two from their MGs, and roll broadly comparable dice and they'd be in, if the defensive fire wasn't too effective.
Well, the defensive fire was useless and missed, but then, so did the supporting fire from the Whites. And then Richard outscored Ian, for the first time in ages, by a wide margin. That meant that Ian had nothing going in his favour, except a slight advantage in Will To Combat. 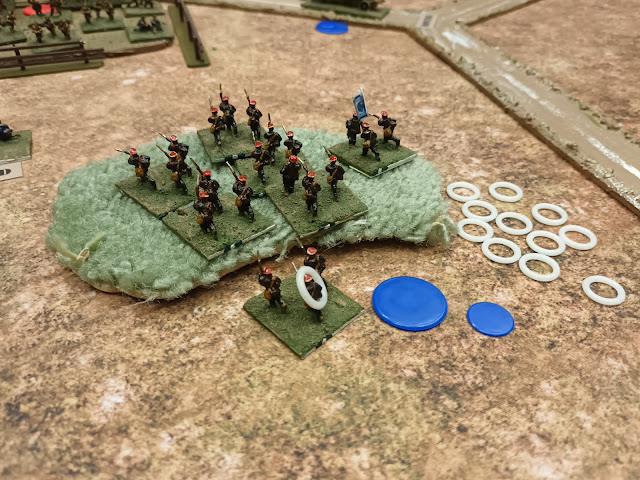 It wasn't enough, and he was repulsed with considerable casualties. 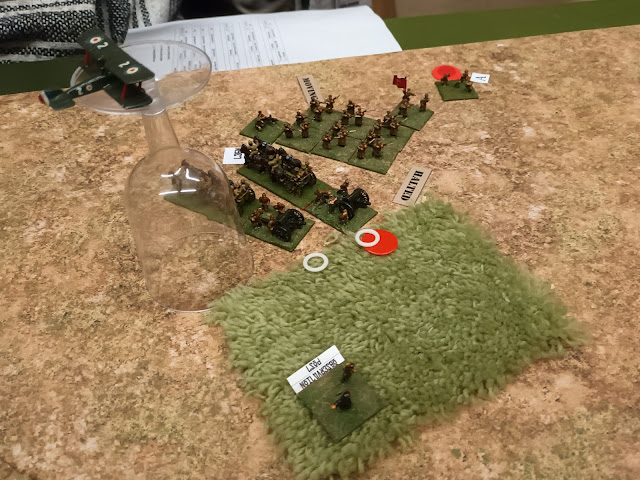 But what's that sound? Yes, it's another one of the White air force's Camels coming in for a strafing run as part of a recce mission. Spotting the Red guns they can't pass up on such a tempting target. Hits are inflicted, and they too fail their terror test and rush off in a panic. 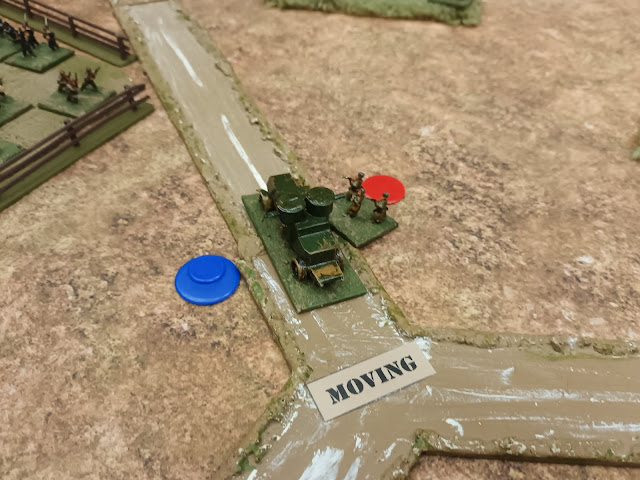 With the armoured car having used all of its activations, the Reds send forwards a brave team to try and disable it. 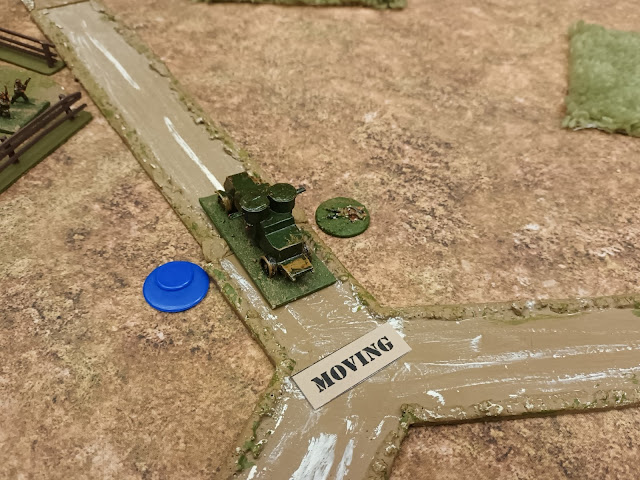 Alas they die in the attempt. 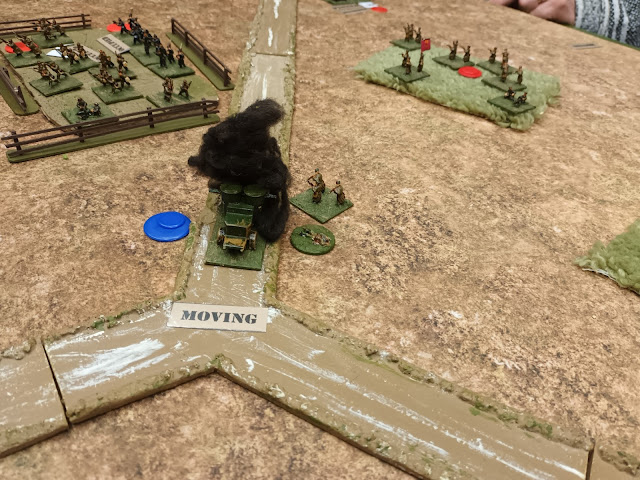 No worries. More brave comrades stormed out of the wheat field, and this time succeeded in destroying it completely. 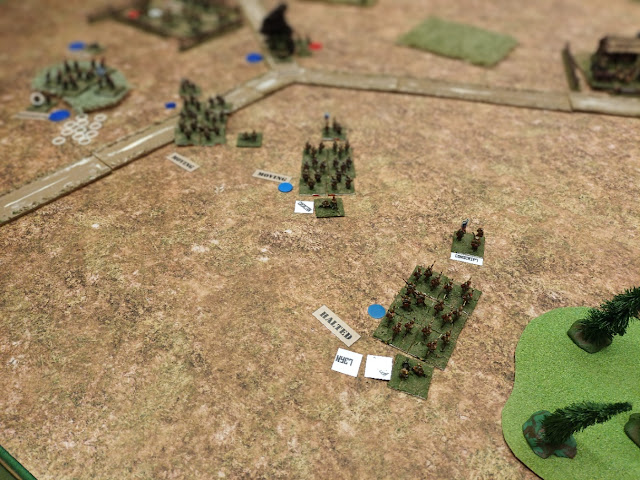 Time for the Whites to move up some supporting units. Over on the right, out of shot, the White cavalry has tentatively made its way to the other stanitsa. 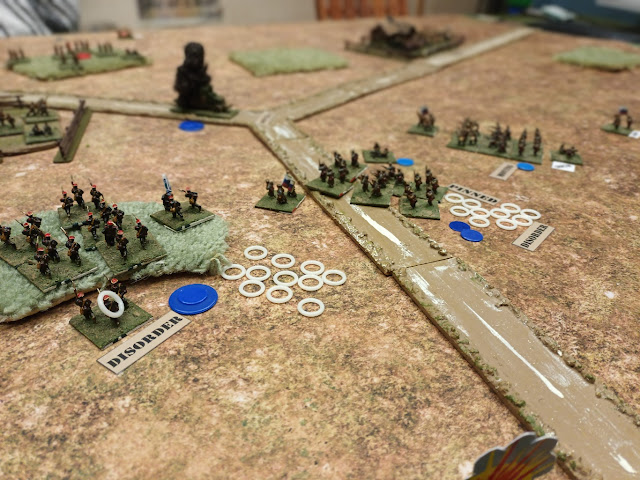 Another solo assault on the village results in another bloody repulse. 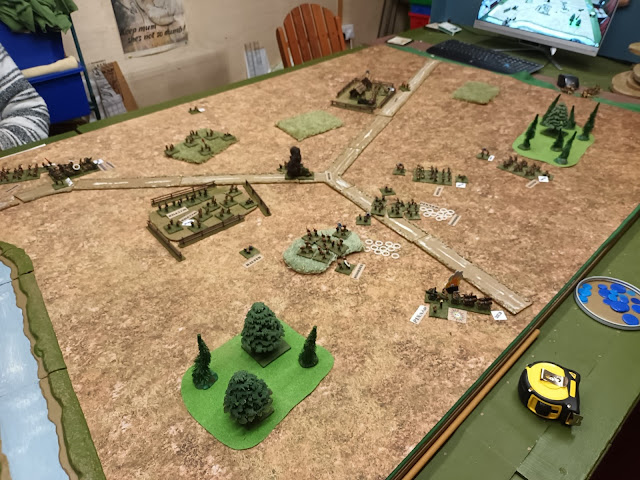 Pause for a long shot of the table. The Reds firmly hold the stanitsa by the river, but the Whites are dismounting in the far one. Elsewhere a stalemate has possibly ensued. Who can break it? 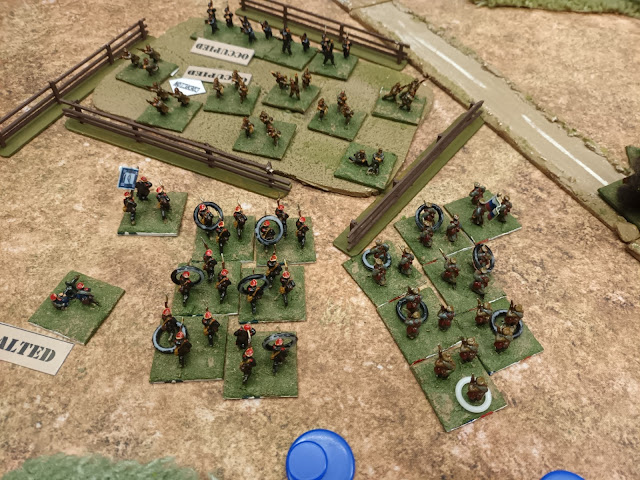 The Whites reorganise both their weakened battalions, and send them in for a combined assault. The Reds in the stanitsa may prove even tougher this time, with the Cheka detachment having turned up. Richard spent most of the game trying to get the Cheka out of everyone's way, so they wouldn't force him to coerce a unit. The Nyet/Da! - Coercion rules have changed for this game, to try and make players up the game tempo a bit. Richard was keen for this not to happen. Anyway on this occasion it worked having them there "in support". Their encouragement tipped the edge, and the Whites were driven off again - despite inflicting hits with their supporting MGs this time. Not so badly mauled as at the last attmept, but certainly second best. 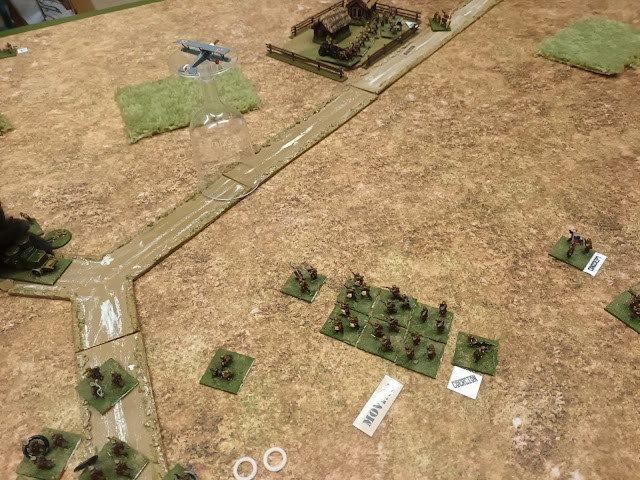 But now! What is this that from the sun glints in West? Why, 'tis a Red Warrior and his airborne steed! Alas, he's a little bit off, and strafes an empty stretch of road... 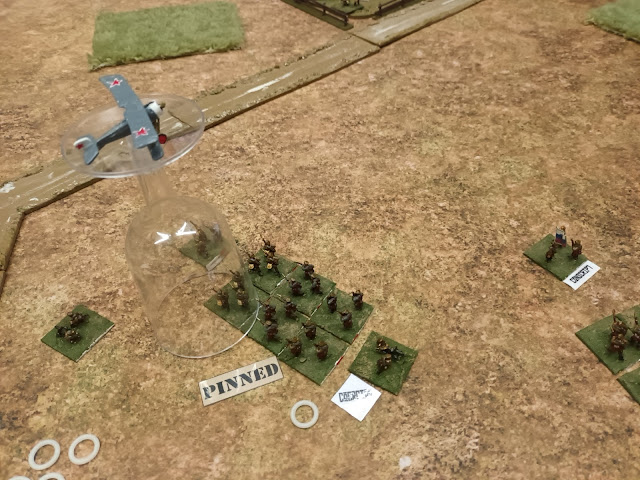 ...or was he "getting his eye in" for a second pass at a more juicy target? 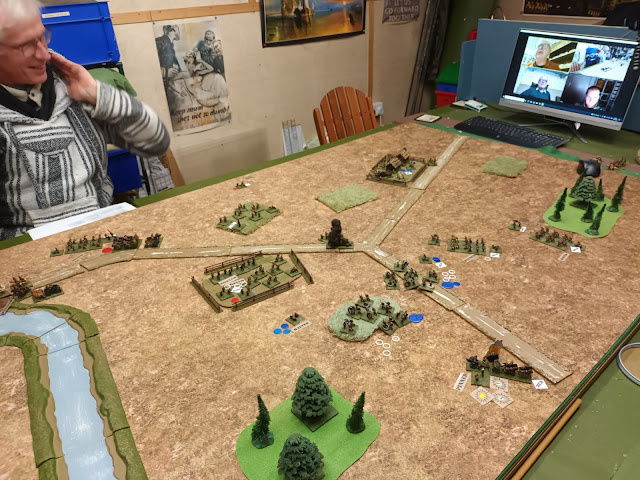 The centre has slowed a bit. Richard has rallied back his artillery, but his cavalry are still milling around at the bridge. 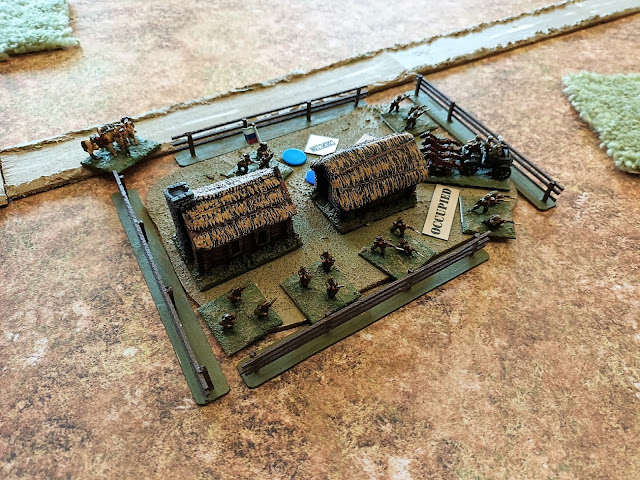 The White cavalry seem to be well set in the stanitsa that isn't under threat. Probably looting the place for vodka, bread and salt. 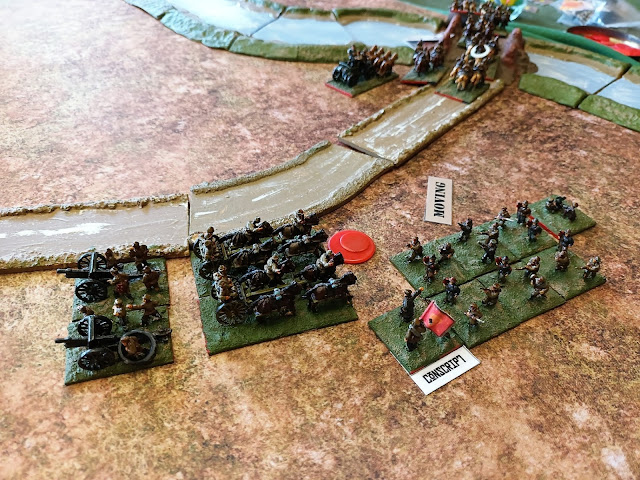 The Red guns are back in action, but currently not hitting anything. 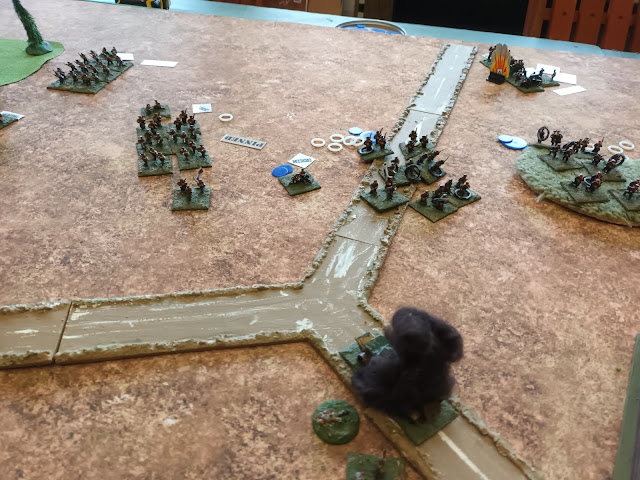 The White centre all looks a little forlorn, and bereft of ideas. 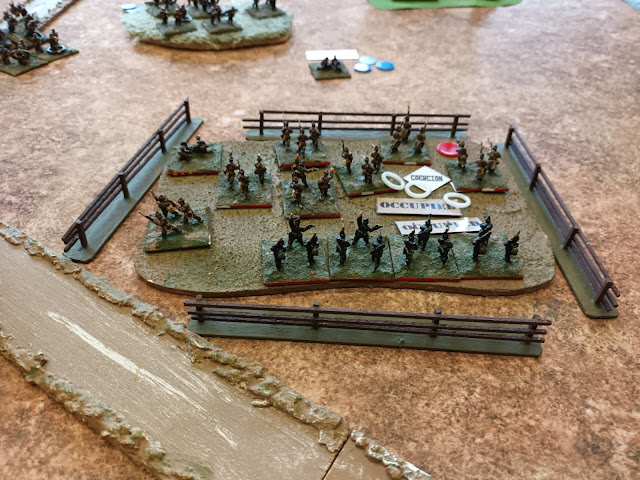 The Red troops make themselves at home in their stanitsa. They already seem to have pulled down the buildings!
So we ended it there, after about a 2 1/2 hours. We took a while to get going, partly because Vincent was completely new to the system. Having said that, he picked it up quickly. Games over Zoom also always take a little longer if they are multiplayer. I was also a little rusty on the more open warfare, given our recent bouts of trench warfare.

The Nyet/Da! rules are closer to what I want now, but still aren't perfect, and there is an issue with close assaults against armour. Theoretically I like the odds, but the million to one shots are coming up nine times out of ten, which is not ideal.

Still, it passed an evening. And the new mat looks nice.