Or what Edward did next.

The year after Edgcote Edward IV was faced by another rebellion instigated by Warwick and Clarence. A rising in Lincolnshire ended with the not-really-a-Battle of Empingham, or Losecote Field as it is often called. Empingham is near Stamford, just across Northamptonshire's northern border, about as far from Edgcote as you can get, really, from a county perspective. Mike Ingram used to argue that the battlefield was once in Northamptonshire. I'd like to be able to discuss that theory with him, but alas that will never happen now.

Like at Edgcote the rebels were heading from the North to join up with Warwick and Clarence. This time they were using the Great North Road, rather than the more central route that goes via Northampton, so were further east. Rather than dither around like the year before Edward is a huge ball of unforgiving energy and headed to intercept the rebels. The father of the rebels' leader. Lord Welles (a possible candidate for Robin of Redesdale) was already in the King's hands, which didn't bode well for them.

In this scenario Richard reckoned the rebels outnumbered Edward about 1.5:1, but numbers are really tough to gauge. For the game Edward was played by Jon, with Will to help him out. The rebels were me, Ian & Phil. 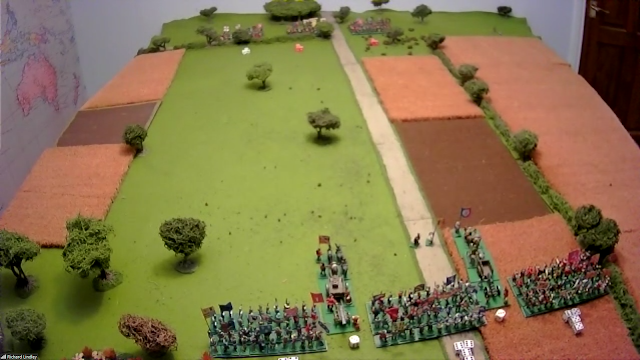 Edward is near the camera. The rebels are in the distance, behind the hedge. Richard had done a rules re-write, doing away with his detailed army data sheets and using dice to record unit condition. 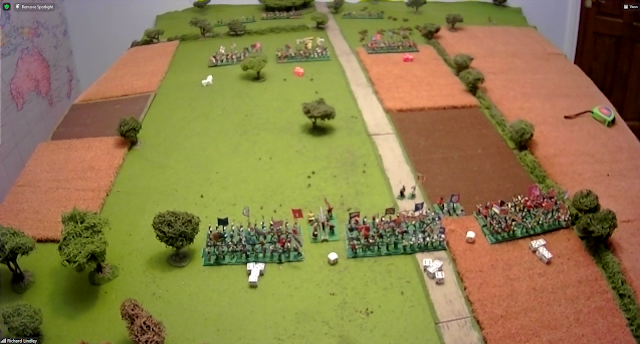 The Royalists moved up and deployed their artillery. We started the long walk to contact. 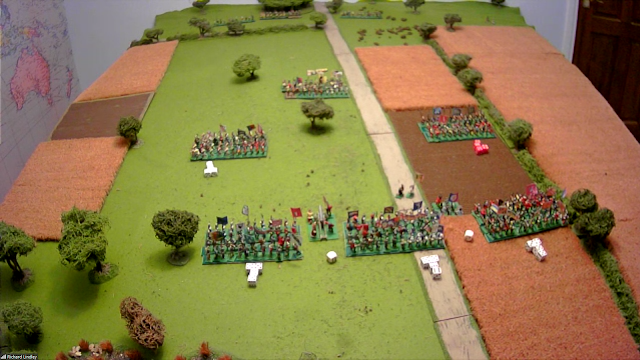 During the approach march the Royalists focussed all their artillery and two battle's worth of archery at our central battle, which was mine. I was soon taking a lot of damage, and then finally I took a three-hit shot, which not only does a lot of casualties, but also sends you backwards. 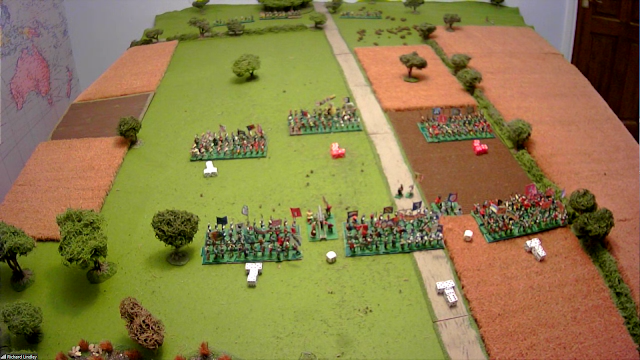 Undeterred I galvanised my men into action, and moved closer. I now started to shoot, having conserved my ammunition. Turns out I shouldn't haver bothered, as most of my archers were now dead. 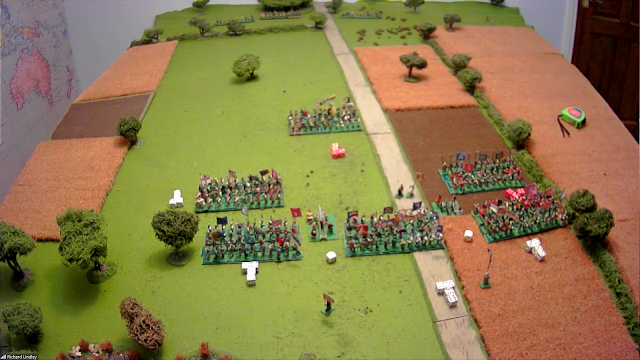 My colleagues closed with the King's troops. We had hope here, as they were mostly undamaged due to the focus on me. 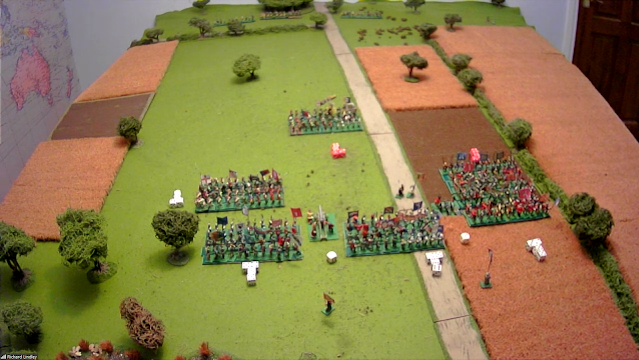 Will immediately charged Phil on the right of the picture. Jon stood and continued with the archery. 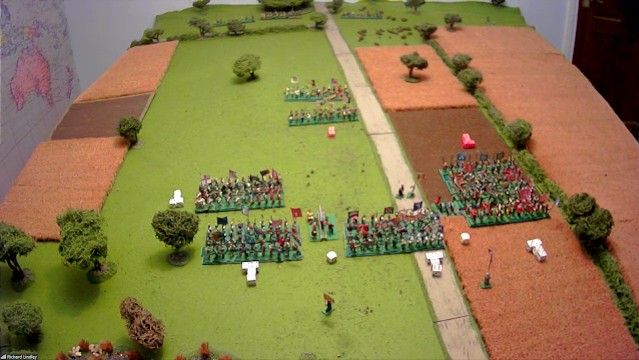 My archers had finally had enough from the artillery and everything, and headed for the rear. At this point Jon decided to execute Lord Welles. That's him on the road, standing next to the axeman. 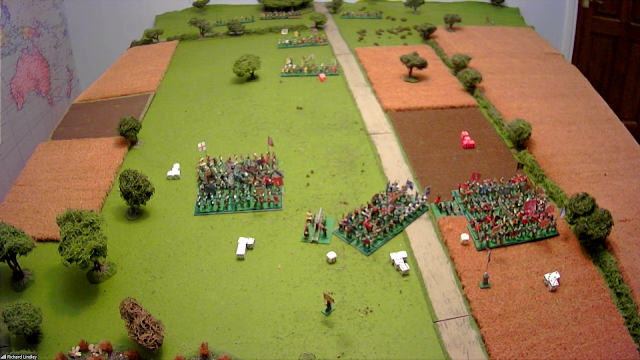 My attempts to rally my men were partially successful. Well, I'd stopped my melee troops from fleeing any further.  Jon swung Edward round to attack Ian with two battles, leaving Will to cope with Phil. 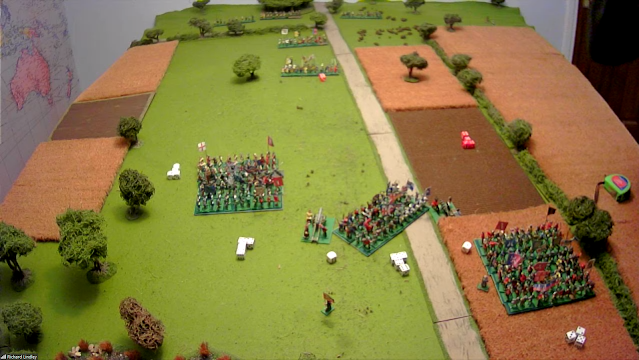 What happened next was Ian was driven back, out of reach of the central battle, and Will was also pushed back. 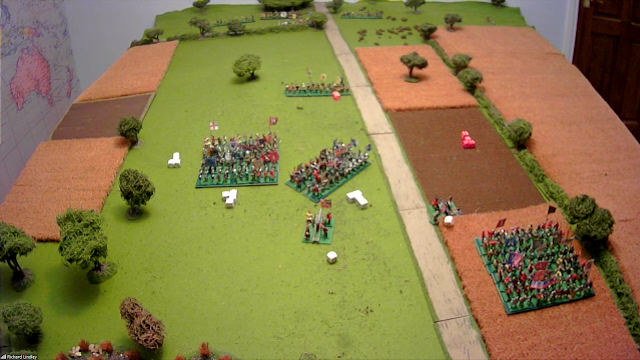 My archers have now fled for good. My other men are creeping slowly forwards. Jon is closing in on Ian with his central pincer move. 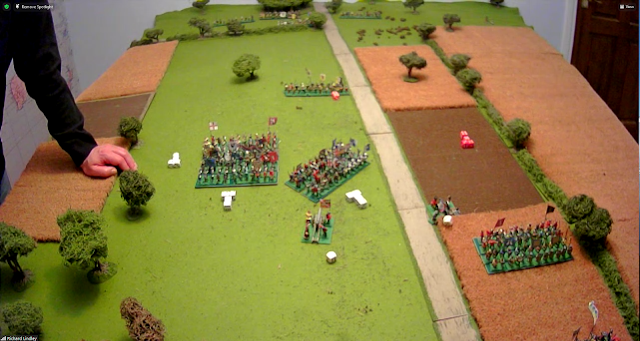 And then we have some luck. Phil does the triple hit thing on Will, and pushed him back. 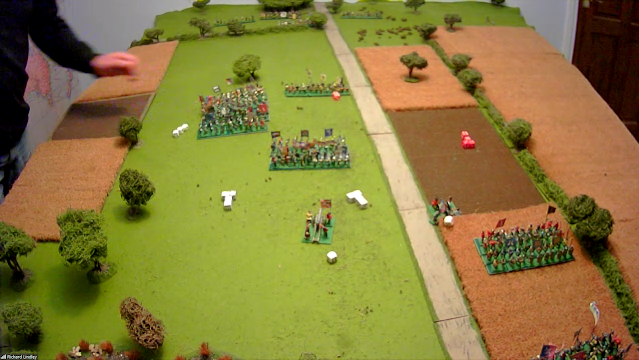 But on the other flank, however, Ian is steadily giving ground, and then breaks. 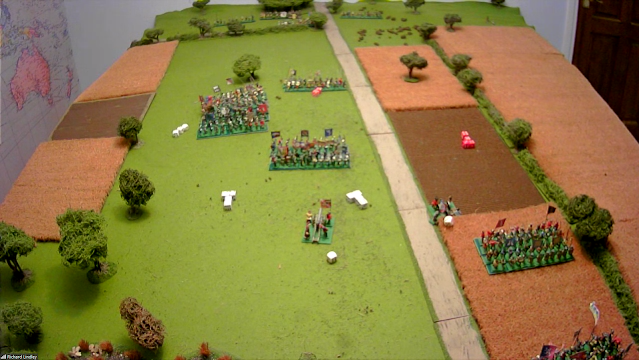 It's not obvious from this picture, but Ian has now failed a morale status check, and so have I, so we're down to Phil, victorious on his own and able to make good his escape. Big win for Edward.
More of a battle than its historical predecessor, which was scarcely a battle at all. We probably know even less about Empingham than we do about Edgcote (although I haven't had a proper look at it yet) but it shows Edward at his most decisive and least forgiving. Historically he tops Welles before the battle even starts. The net result of the battle is that Warwick and Clarence flee to France and Warwick becomes a Lancastrian. Six months later he's back with an army and it is Edward's turn to flee.