Part two of the epic struggle for the railway crossing. We had Chris in Shedquarters to add to the fun along with the participants from last week. Will had sorted his IT problems out, and took over as Red Commander, with Phil and Chris as his minions. The Whites were played by Richard and Patrick. 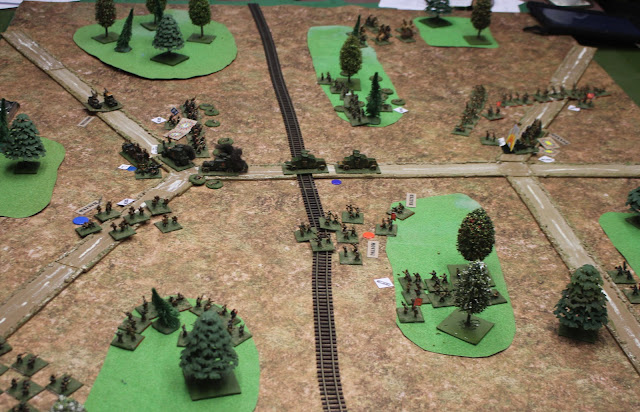 The Whites had the initiative on the first resumed turn. They pushed their armoured cars on to the objective, and moved some conscripts out to contain the Red left wing, that was looking ominous. 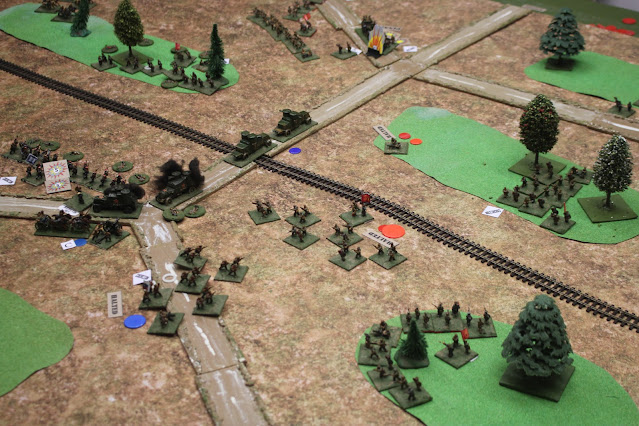 The Reds pushed forwards in the centre, and deployed an MG platoon to try and knock out the White armoured cars. 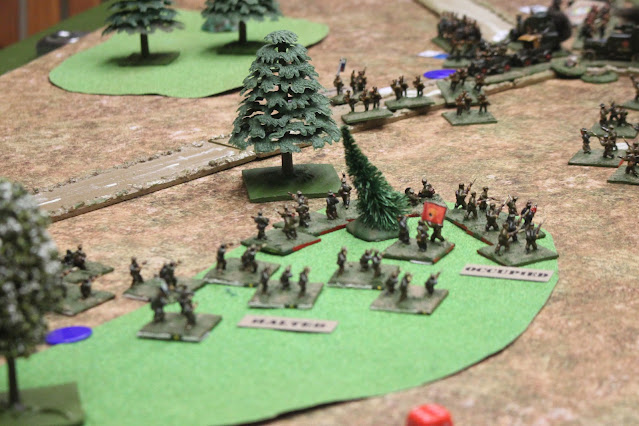 The Whites infiltrated some conscripts into the wood on their right to try and force the Reds out. 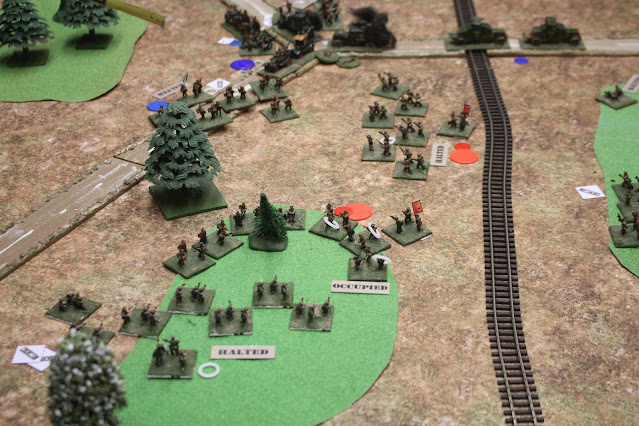 There was an exchange of fire to no great effect. 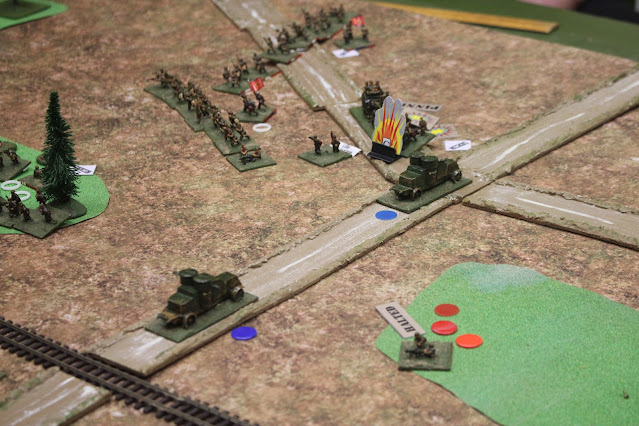 The commander of the lead White armoured car got carried away, and rushed up the road excitedly, straight into an artillery bombardment. 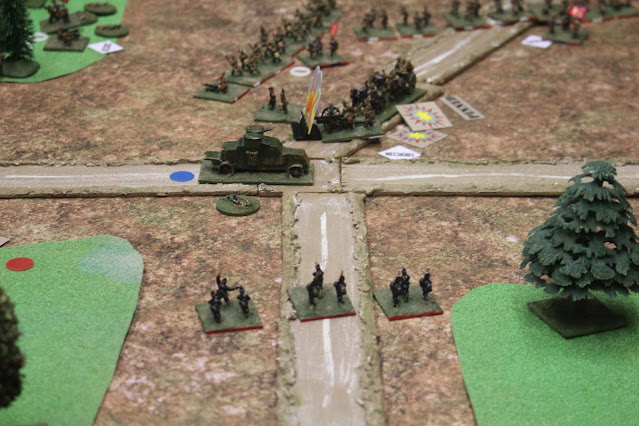 The Cheka company showed some surprising bravery, and launched an unsuccessful attack on the other armoured car. 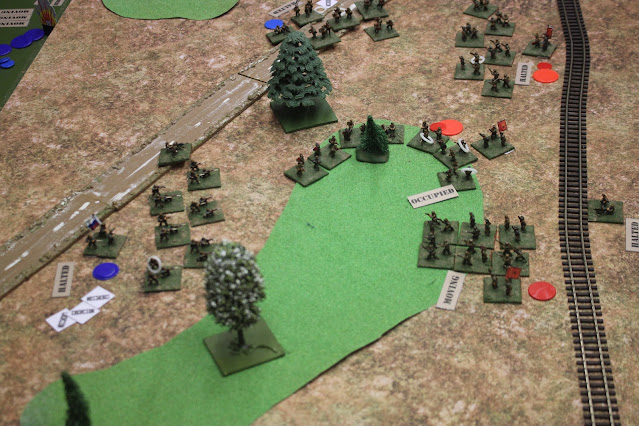 Chris, commanding the Red left wing, drove Patrick's conscripts out of the wood with a bayonet charge. 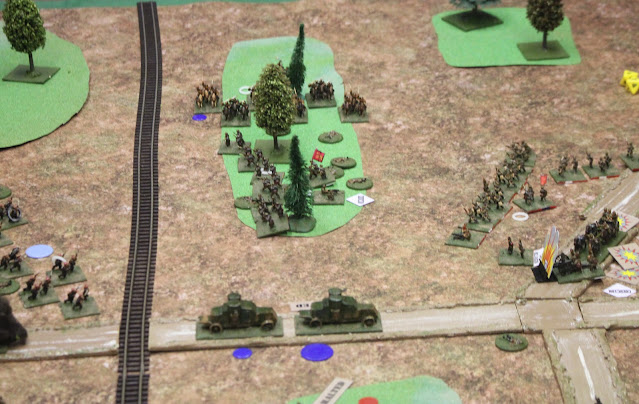 In the centre, the over-excited armoured car withdrew in haste to avoid damage from its own artillery. 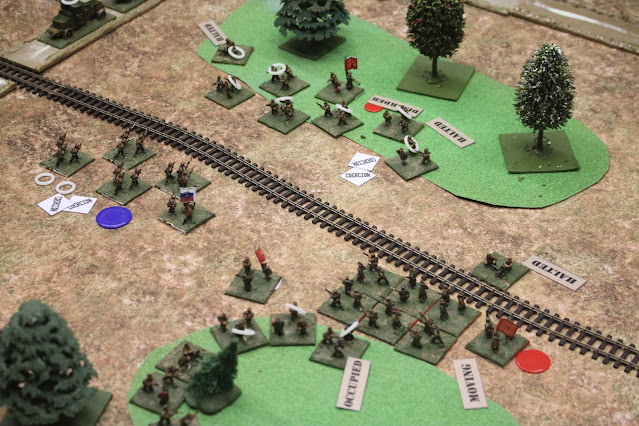 Having cleared the wood, Chris eyed up the Whites in the centre. 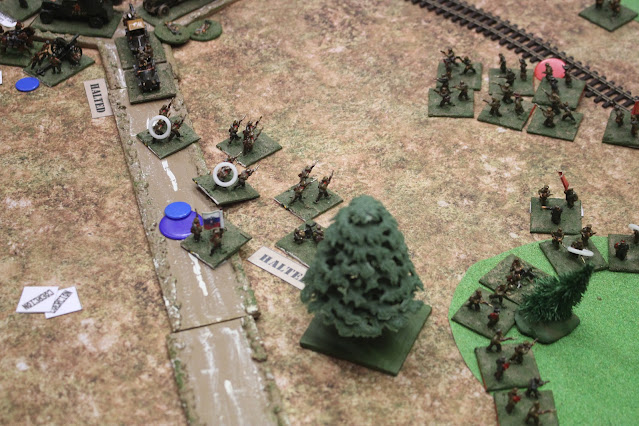 The Whites retreated back out of charge range. 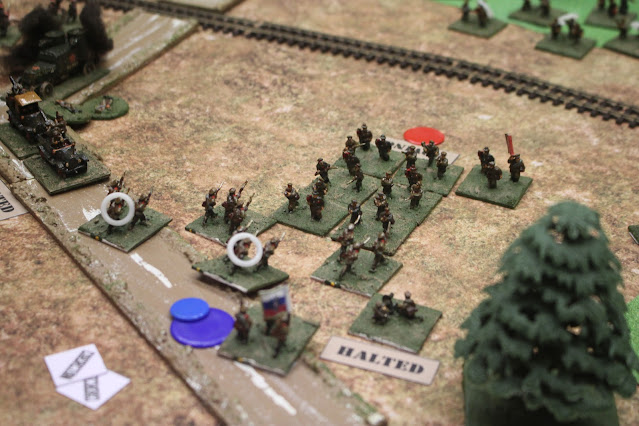 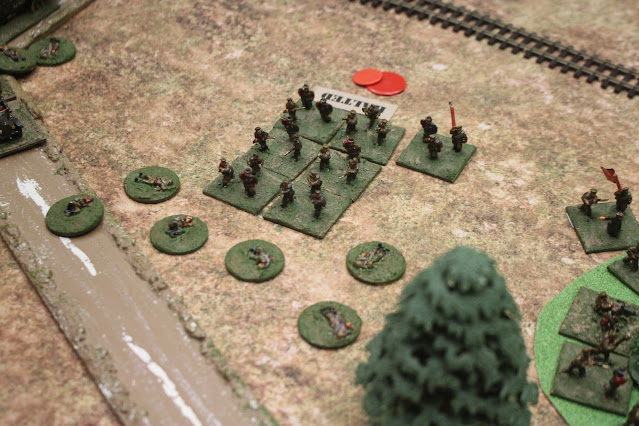 ... and routed the Whites comprehensively. 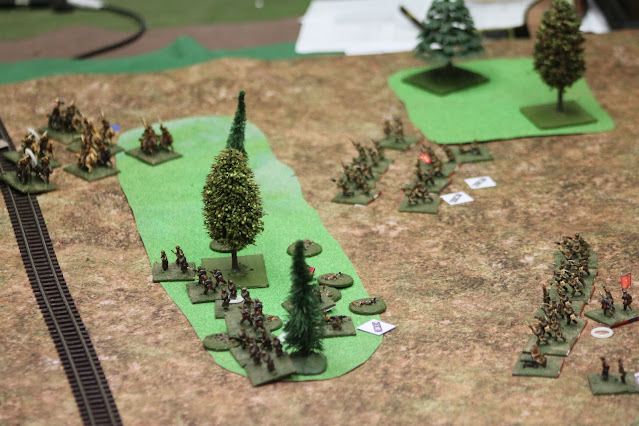 On the Red right Phil sent out an infantry battalion to drive off the White Cossacks. 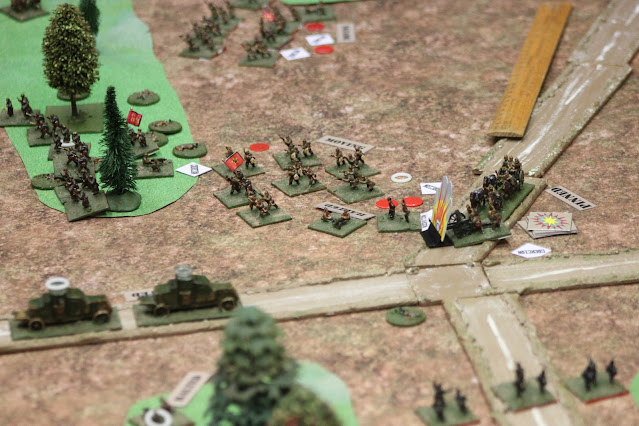 The armoured cars, under fire from several MGs, started to suffer. One of them took engine damage and was immobilised. The other took hits to its turret area, slowing its rate of fire. 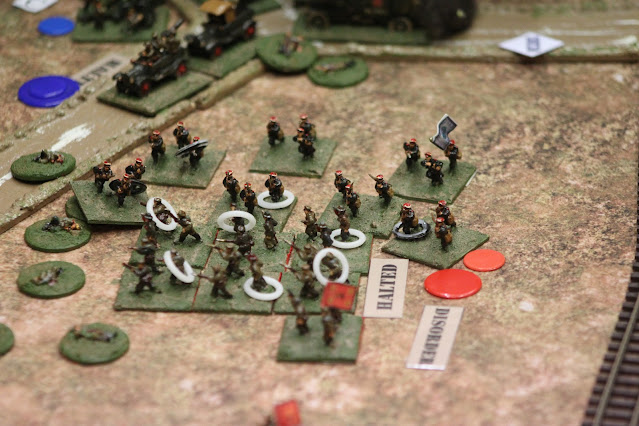 The Red victory on their left was short lived. The remnants of the last Officer battalion rushed them with the bayonet after they had been shot up by the Model T gun cars. 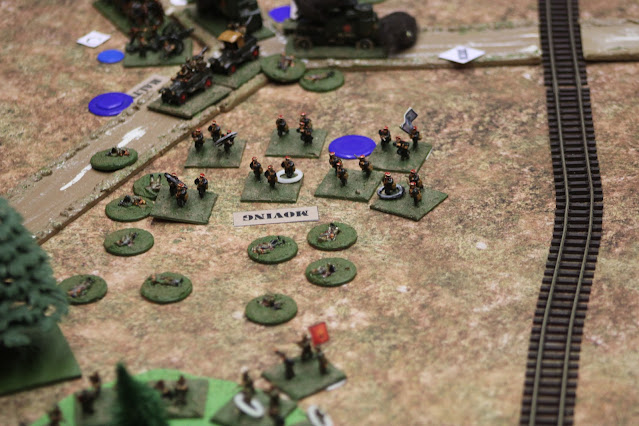 It was all over quite quickly. 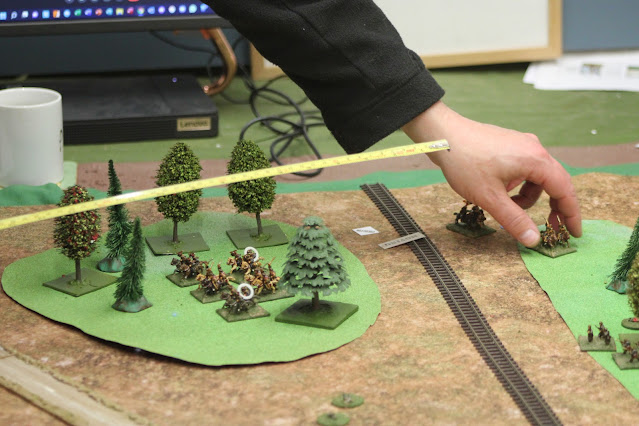 The White Cossacks evaded the infantry sent to hunt them down. 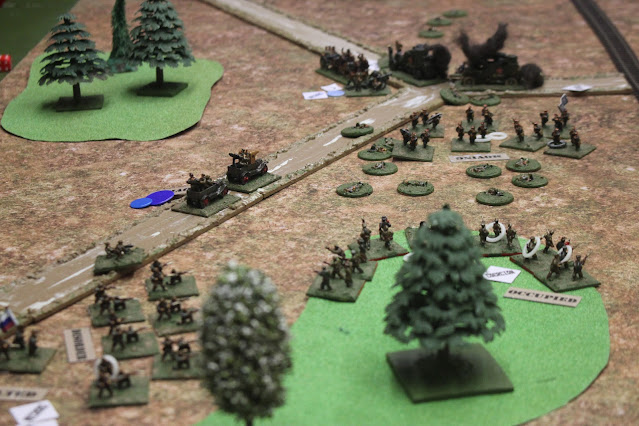 The Red infantry in the wood on the right looked a little beleaguered, but the conscripts on the left of the picture were having morale issues 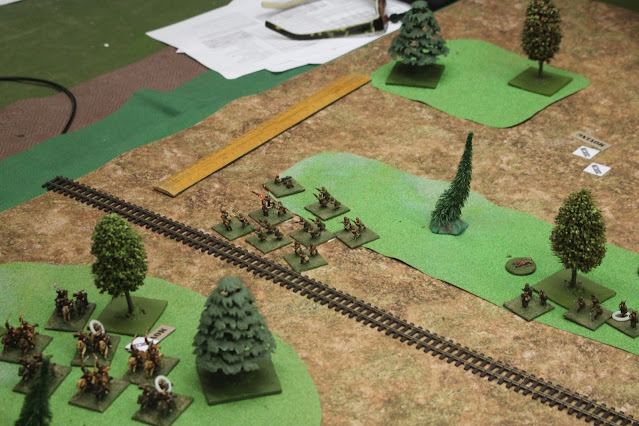 The Red infantry on their right continued their advance. 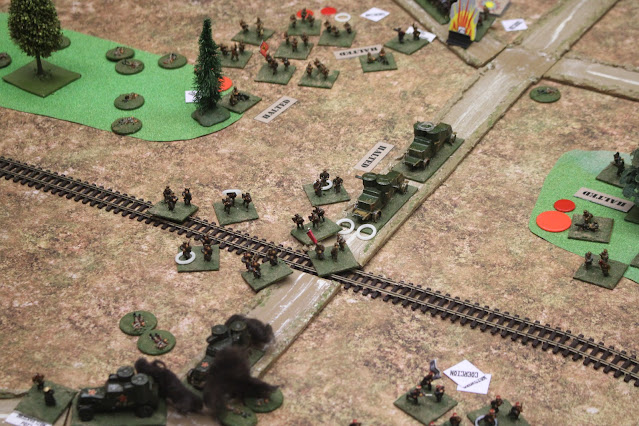 As the end of the game neared, the Reds sent forwards an infantry battalion to take the crossing, and cut off the armoured cars. 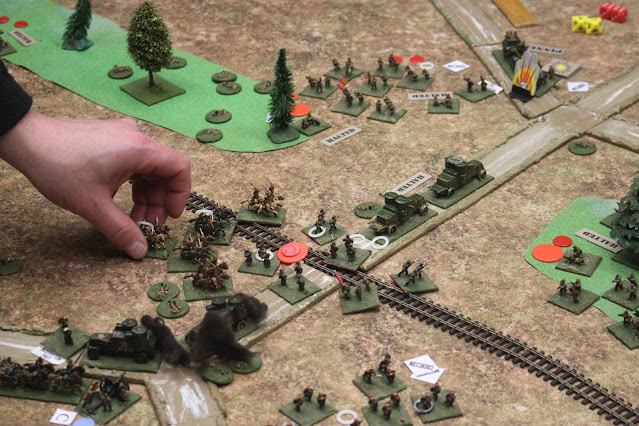 The Whites launched a cavalry charge to dislodge them. 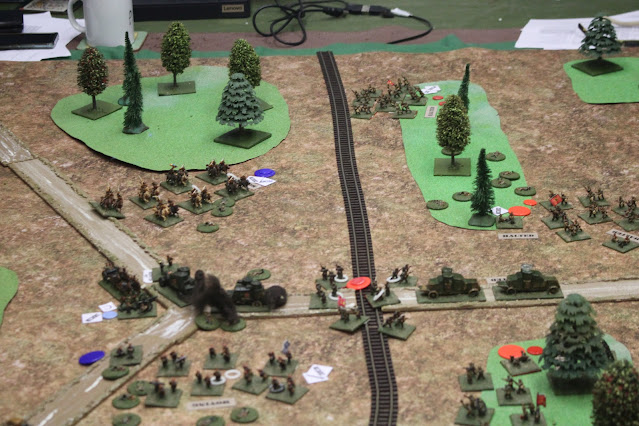 However, their nerve failed them, and they were driven off. 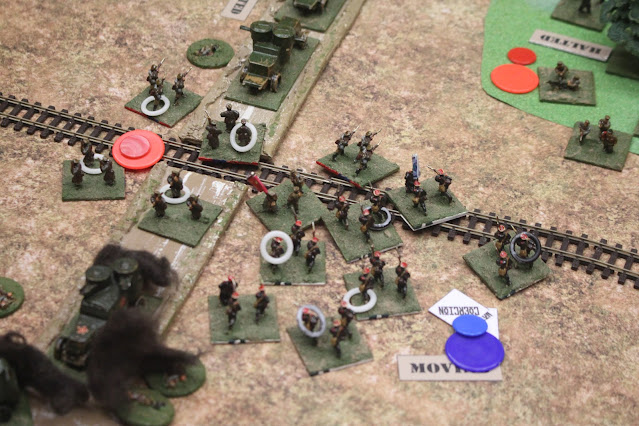 Alas, they had merely paved the way for a final bayonet charge by the Officers. In a bloody encounter they routed the Reds, and secured the centre of the table.
This left us with a Pyrrhic White victory. They held the objective, but had suffered considerable losses and their conscripts were all bordering on mutiny. The Reds had taken damage too, but were in better shape. The Whites also had the problem of how to extract their armoured cars that are under increasing pressure and are suffering more and more damage.
There is probably more play in the scenario. We got through another three turns but play was slow in some areas as the decision making got more and more critical. It would have been much faster if we'd all been in the same room. We were using Google Meet, and the inability of it to run two cameras without added software is a bit of a nuisance. If we'd had Zoom with cameras at each end of the table things might have gone quicker.
I had made a few changes to the armour damage and movement process since the first half of the game last week, and I am much happier with the results and the narrative that the game now gets.
I now need to get back to writing up the rule book. The first draft is done, but there's still much too do, especially as I'm making changes still. The end of March is fast approaching and it looks like I'll miss another deadline I've set myself. My time seems to disappear these days, and I spent a lot of my writing time these last few weeks working on a talk for the Northamptonshire Battlefields Society as well as working on related issues.
Busy, busy, busy.