The wheels of wargame rule writing and design grind exceeding slow, it seems to me at the moment. I had a breakthrough in one area last week. That broke the log jam, and several chapters have subsequently flowed from the keyboard. Time to try out some of the new thinking.

This week gave us a White cavalry raid in strength, opposed by some Red local militia, supported by an armoured train and some cavalry

We had a good turn out. Chris, Phil & Tim were in Shedquarters, and Jon, Richard, Ian, Steve & Vincent were on-line.  Jon was the White commander and Richard the Red. The Whites are at the far end of the table. They have to loot the villages and station and exit this end of the board. 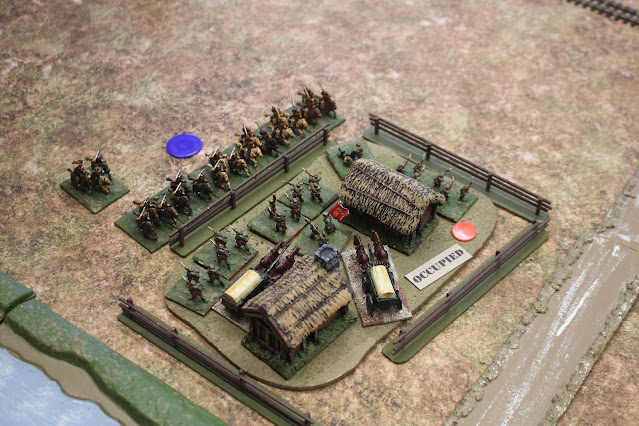 Steve started aggressively by rushing  the stanitsa by the bridge. 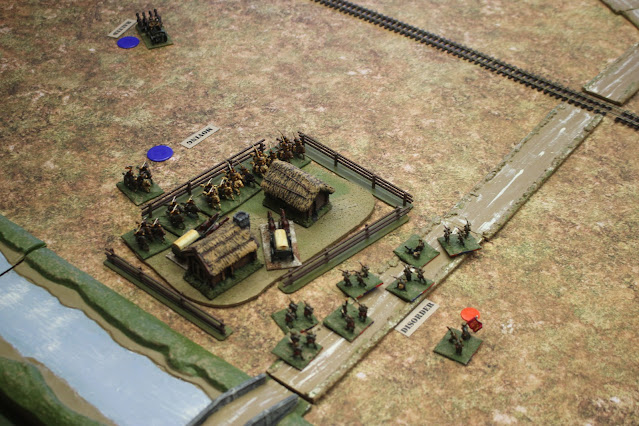 The local militia fled in disorder as the Cossack hordes descended upon them. 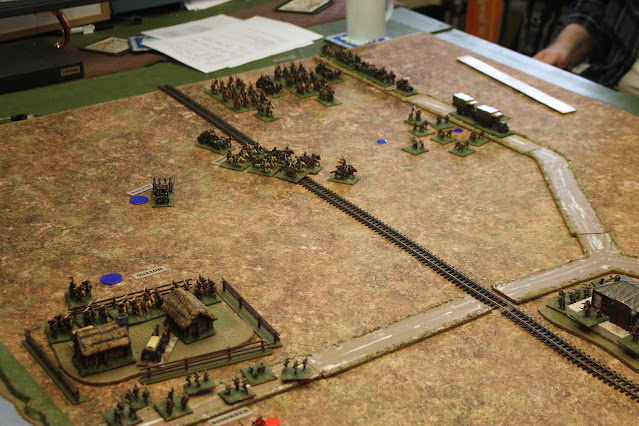 Jon had Phil move up the mobile infantry. Phil debussed as well, a little early to my mind, but he normally knows what he is doing. 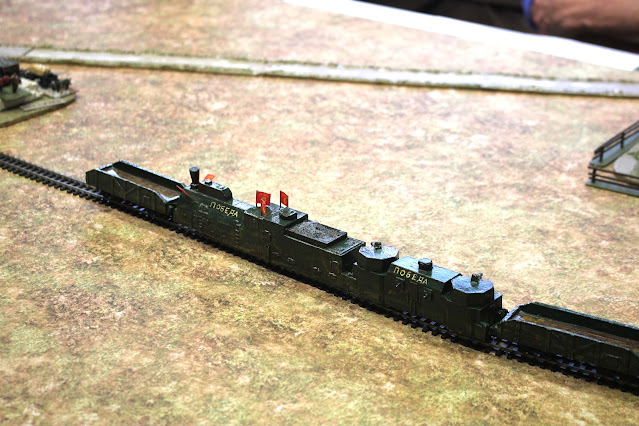 The turn flipped to the Reds, and the armoured train "Victory" arrived. 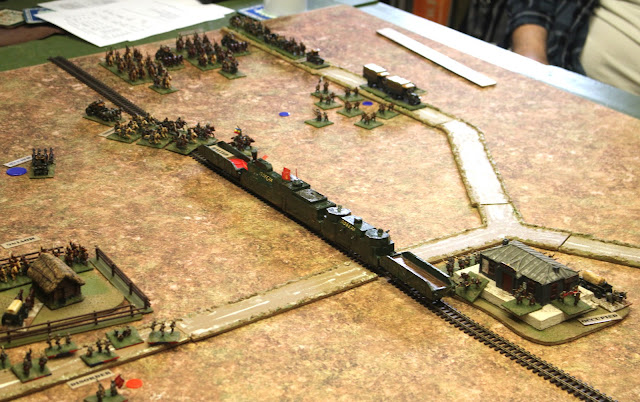 Richard made his intentions clear by steaming it straight up the board, and stopping in the middle of the White forces. He then opened fire with his field guns at the columns of White cavalry. Jon was not amused. Probably rightly so, as he had pointed out months ago that making cavalry arrive in march column made them very vulnerable. My view when I set the game up was that my first few actions as White commander would have been to get them deployed for action.  The game is about prioritising choices, but I can see his point. 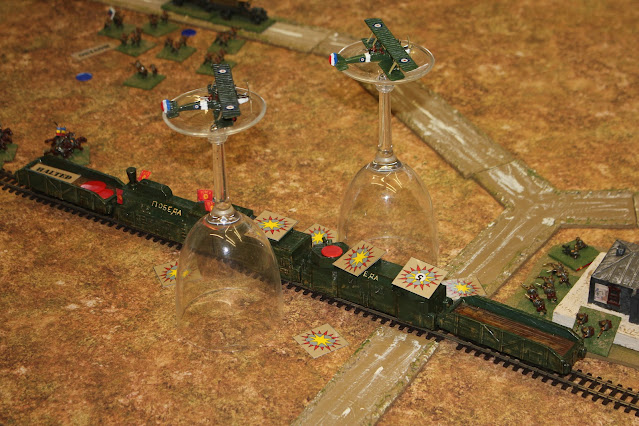 Jon's reaction to the train arriving was to play a Joker. That enabled him to roll up a bombing run. He lucked out on his selected target, hitting it square on, and fairly smothering it with Blast Markers. 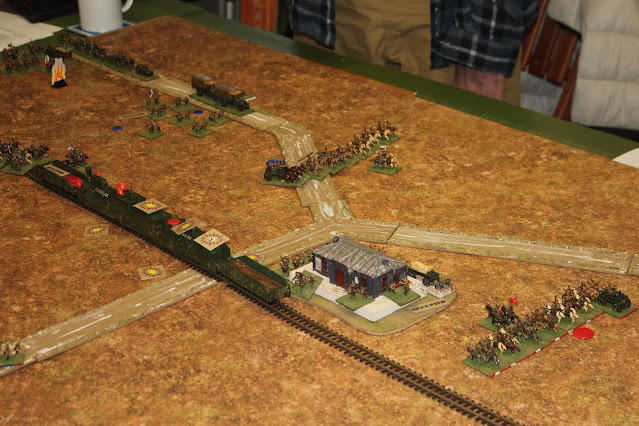 The Whites - Ian I think - brought up his other cavalry regiment to threaten the other side of the station. Chris moved some cavalry up in response. 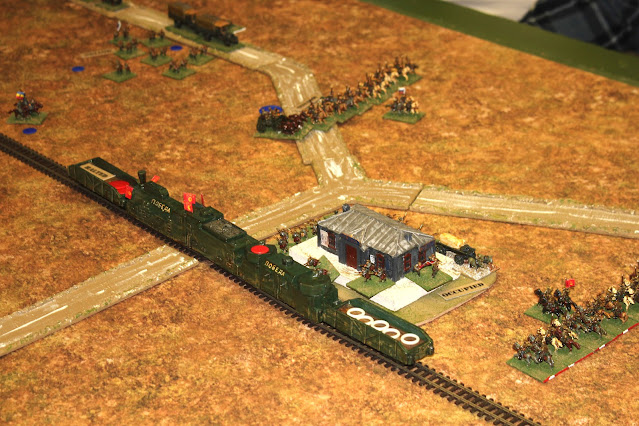 The results of the bombing run are resolved. The train has sustained quite a few hits, so its commissar orders it to retire. This decision was not in Richard's hands. The elite Railway Security troops don't look like they'll get a chance to disembark. We're only half way through turn one. 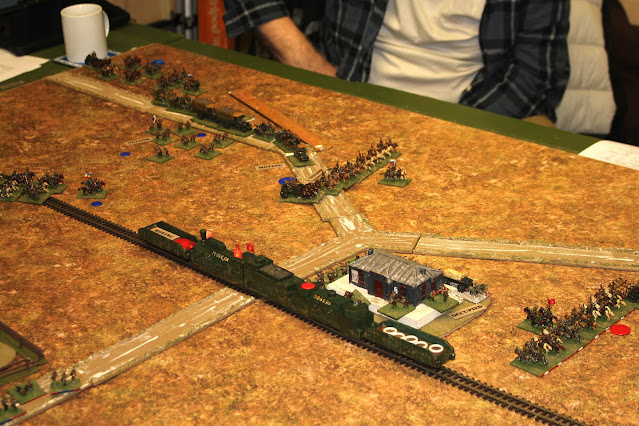 Jon moves up his artillery, and Ian has retired his other cavalry out of the beaten zone created by the armoured train in the distance. 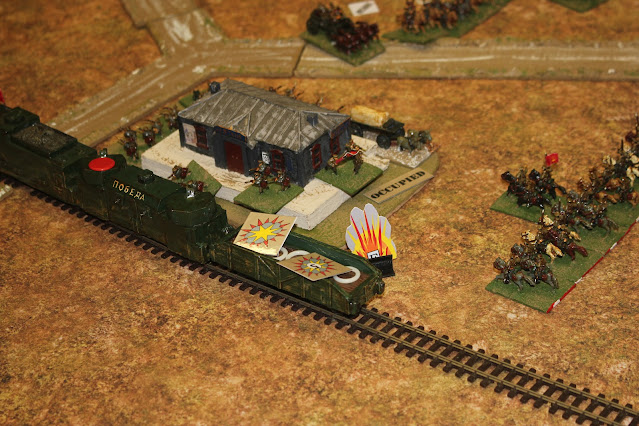 Jon's artillery opens up on the station, overshoots and hits the train. It isn't having a good day. 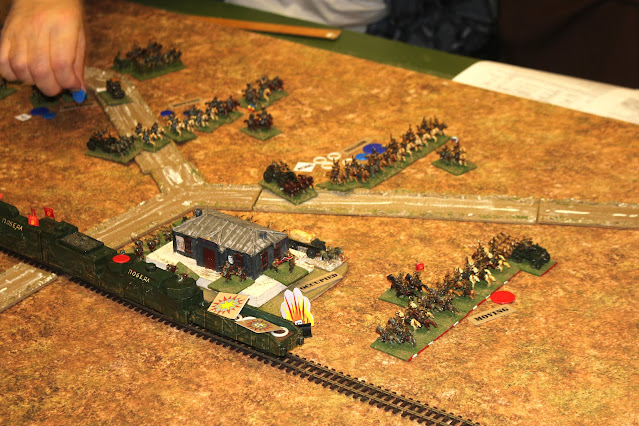 The infantry in the village open up at the White cavalry. 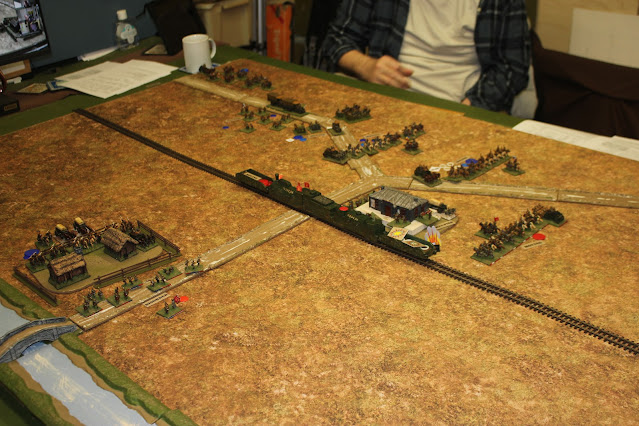 Everything seems to be going on over that side of the railway line. 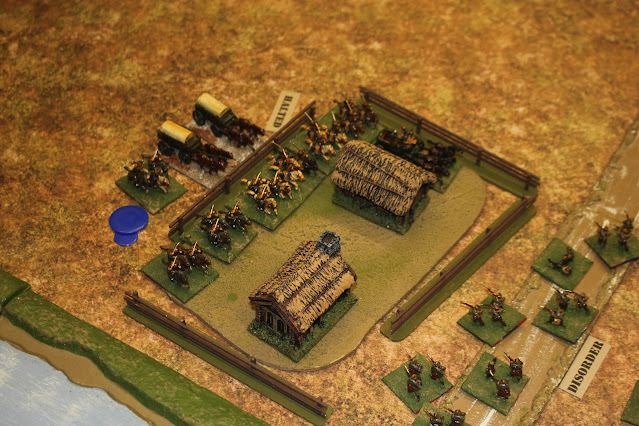 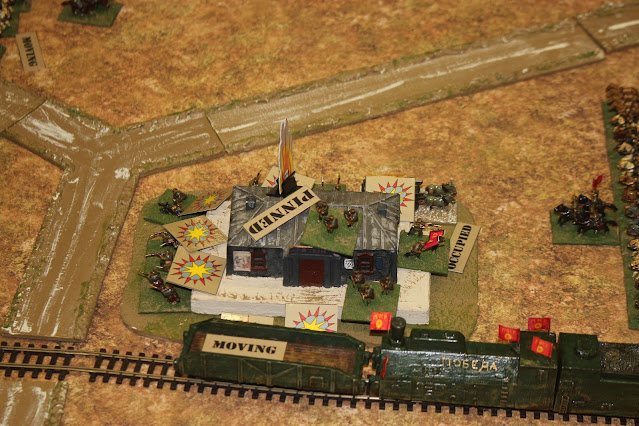 Jon corrects the aim of his artillery, and pounds the station. He gets in enough fire to pin the battalion defending it. 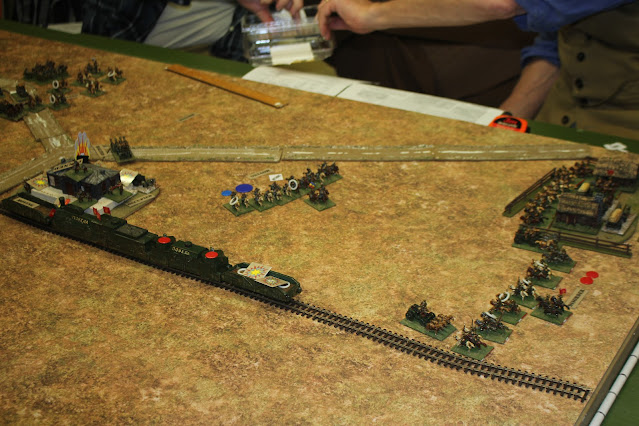 The cavalry by the station have a melee, and the Reds are driven back. Richard tries to slow the follow up with the MGs of the retreating train. They aren't too effective. 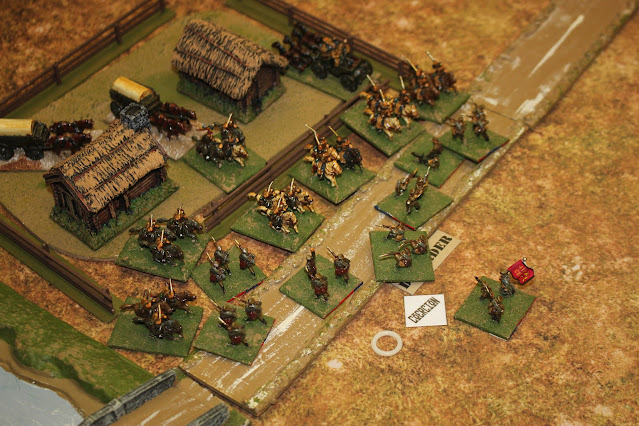 Having secured his loot, Steve rushes the Red infantry, who haven't been given the opportunity to reform as there's been too much going on elsewhere for the Red leadership. 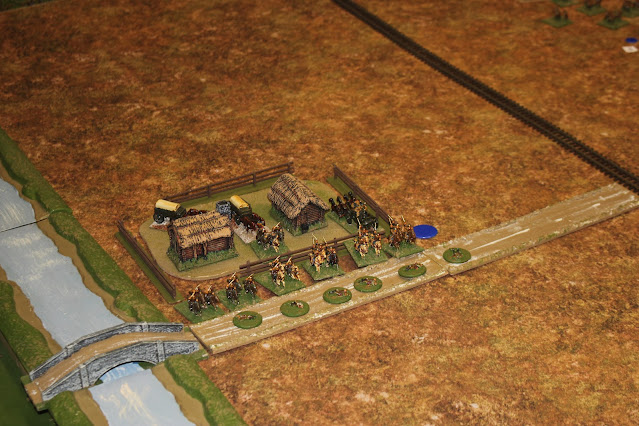 The melee is short. 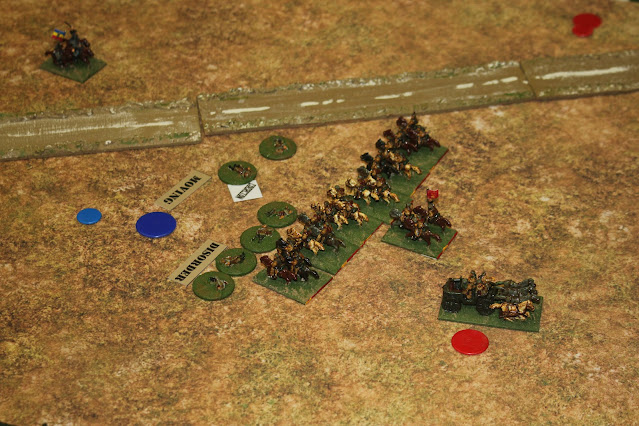 The Reds launch a counter attack with their reserve cavalry in the village on the edge of the table. It is very effective. With the bombardment on the station lifted and the train in retreat Steve tries to repeat his earlier trick, and rushes the infantry defending the area. 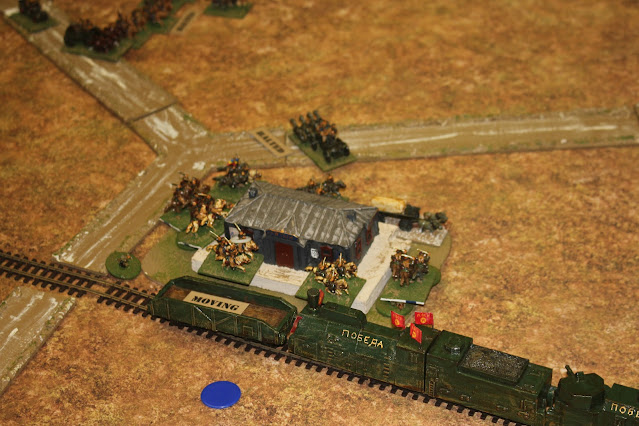 Again the Red infantry perform miserably when confronted by the might of the Cossacks. 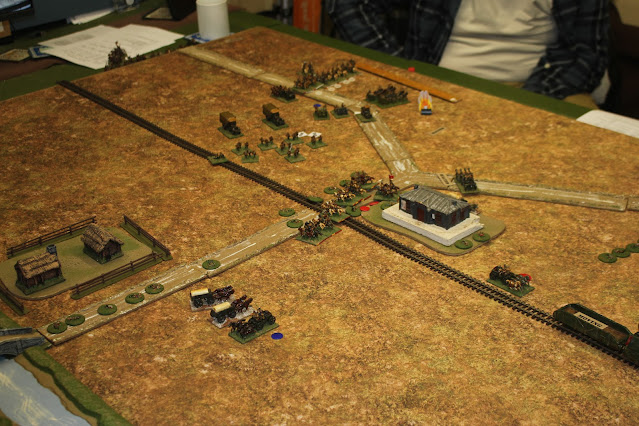 Alas for Steve, he is counter attacked by the Red cavalry, and finds he has over extended himself. The Whites are a bit light on troops now, as they've had to withdraw one of their units to deal with partisan activity in their rear. 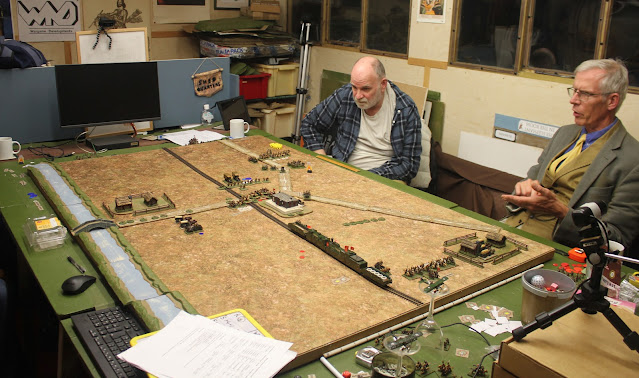 We stopped there. A quick tot of the victory points gave the Whites a 5 point lead. My feeling is that if it had played through they would have nudged further ahead.
A really useful game for me. The new train rules are close but not quite close enough, and I need to do more work on its activations and how you knock it out or force it off the board. The new Off Table Asset rules worked okay too, and they will persist. I need to work on some more variations of the relevant event mix, but otherwise they're good to go.
As might be expected for its first real appearance in a battle the armoured train attracted all the focus, to the detriment of the plans of both commanders. I had got the balance off a bit, and if he hadn't been lucky Jon would have been really up against it.
With eight (8!) people involved, excluding me the game was at bursting point, even if one or two of the people in SHQ were simply lead pushers. That did lead people to making the occasional odd decision, simply because when it came for them to do something they went for the big option rather than the small and simple one.
Still, a lot happened and what did happen looked right. We had bombers attacking a train, we had Cossacks sweeping through a village, we had a properly managed combined arms assault and we had partisans causing havoc.
Sure looks like an RCW battle.