Basic Battle of Dreux. Sort of.

Following some recent reading (see belwo), it was time to give my French Wars of Religion armies a run out. 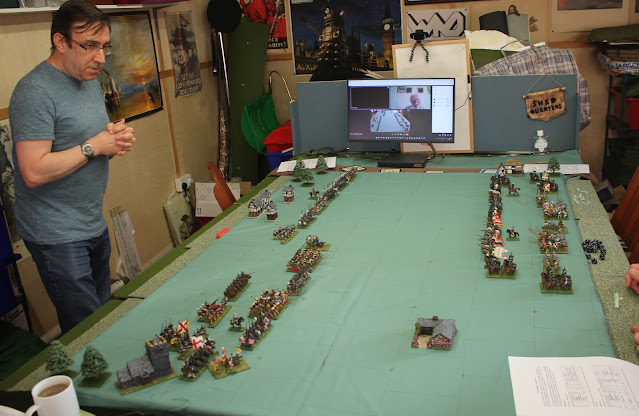 These are some of my oldest adult armies that I started to build when I was a student over 40 years ago. On the left are the Catholic Royalists, and on the right are the Huguenots. This was the first battle of the Wars, and has lots of elan.
Tim took the right wing of the Catholics, and online Richard the left. Chris ran the Huguenots until Phil arrived. Richard was having camera problems, and Will just dropped in to say hello. Jon said he'd be a no show due to DIY responsibilities, but he fixed them sharpish and joined as an observer and rules guru.
For rules we were using Basic Impetus with some of Jon's mods to put them on hexes (off set squares for me) together with bits from Basic Battles and Basic Baroque. A bit of a lash up really. It's a surprise to me it went as well as it did.
Winning the initiative, Tim pushed his wing forwards. Richard decided to hold back, hoping that he could delay the combat on his wing whilst Tim brought the rest of the army into action. 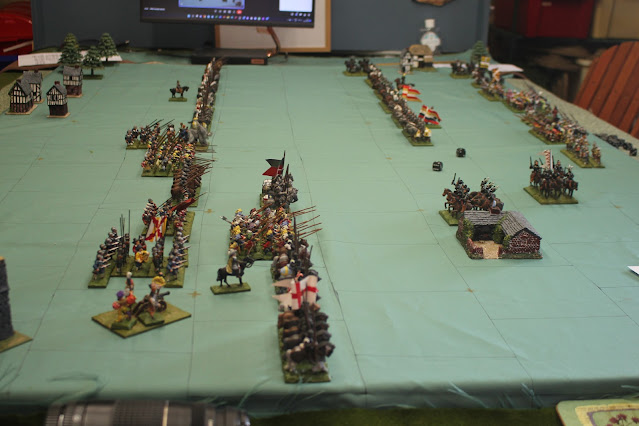 As the Huguenots advanced, Richard changed his mind and moved up in line with Tim. 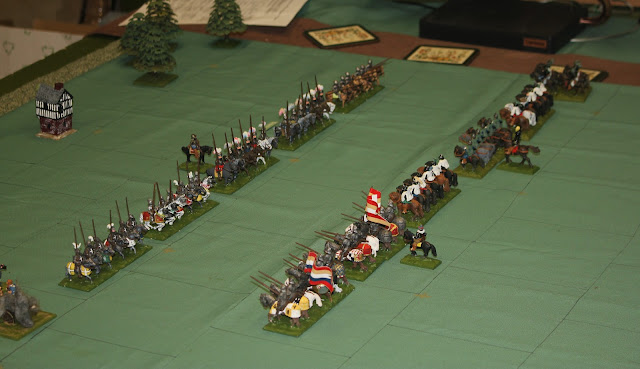 This is what it is all about. Massed ranks of heavy metal. BTW there's so much cavalry in this battle that I had to use most of my collection. The Millers in white cassocks should have lances not pistols. 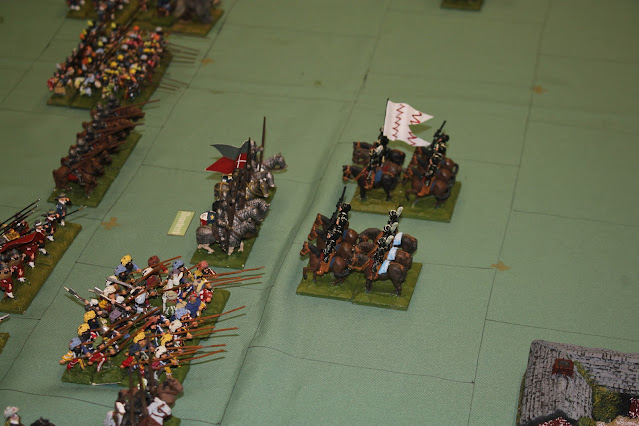 On the other wing Chris' reiters closed with Tim's gendarmes and pistoled him. 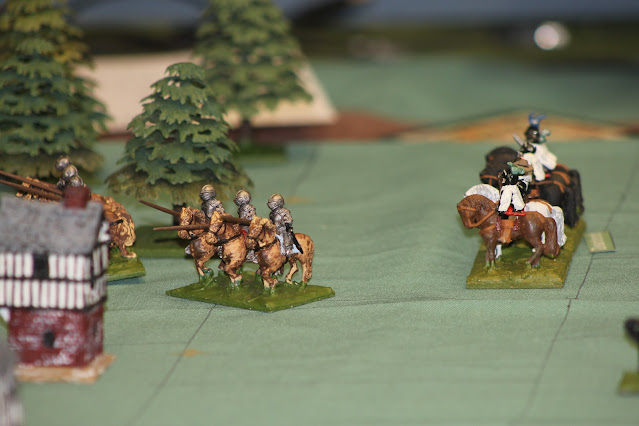 The first full on contact saw some Catholic Chevuax Leger routed by elite Huguenot gendarmes. The elite status rules from Basic Battles are a bit too much, I think. 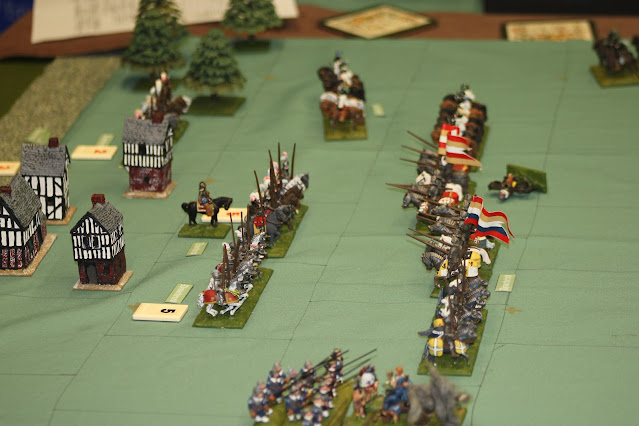 The rest of the Huguenot cavalry charge in (except for a unit or Argoulets who fire their carbines effectively) and throw the Catholics back. Alas! The Admiral Coligny is slain, and the gendarmes mostly fail to follow up and fight a second round of melee.  For this game I modified the Impetus/Fresh rule and said you only lose your impetus bonus if you take a hit to your VBU in melee. 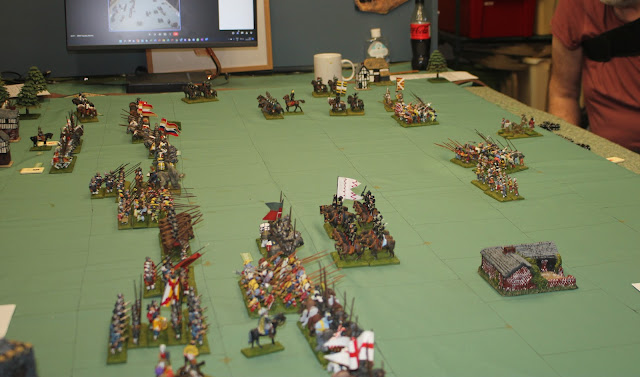 At the other end of the board, Tim counter attacks with his gendarmes against the reiters. If you look closely you'll see a second gendarme unit of to the left rear of the unit with the green/red flag. 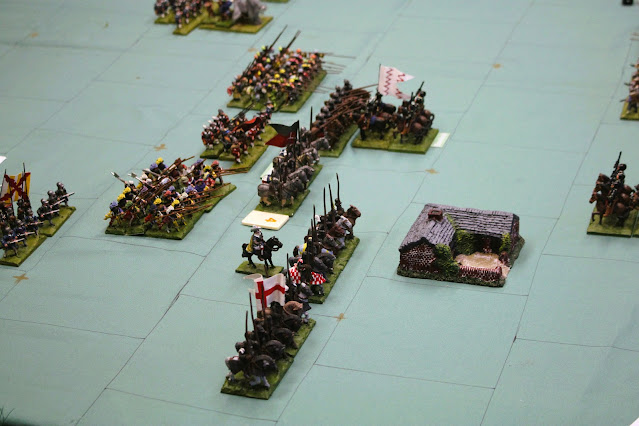 One unit of reiters is driven back, but the others hold their opponents in check. 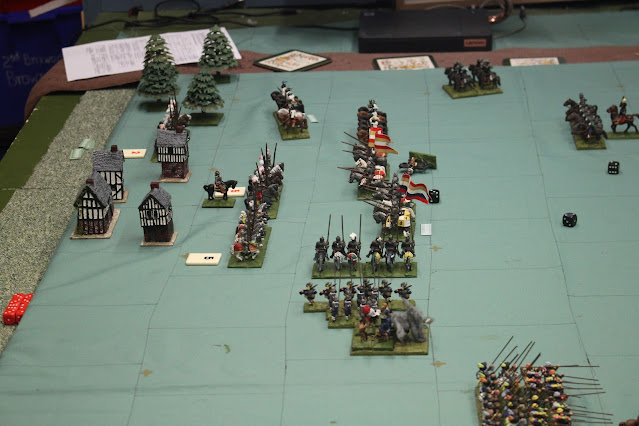 It's all over the place at the other end, as Richard hurries stuff into place to stop a Huguenot breakthrough rolling up his line. 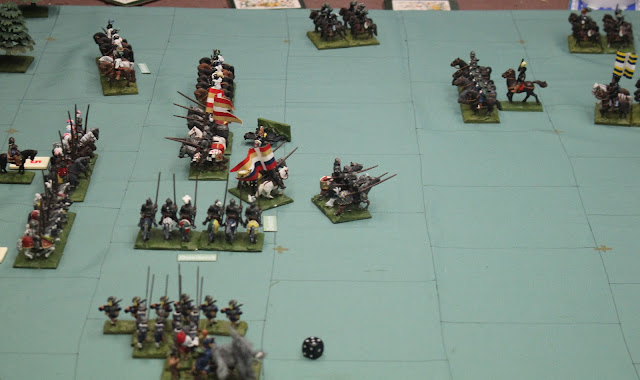 He manages to break one of the Huguenot units. 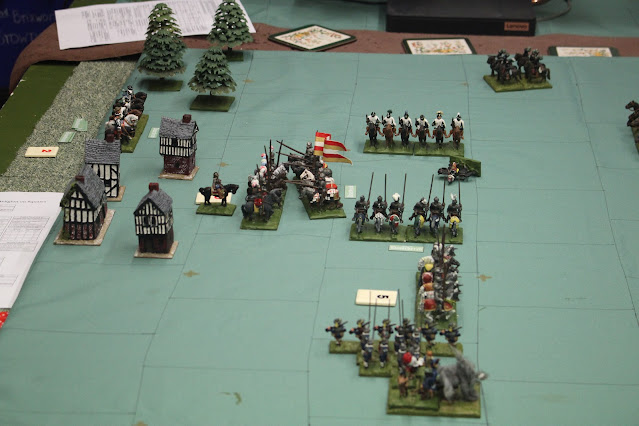 Phil is still charging where he can, and brings round a spare unit to stop Richard breaking through. 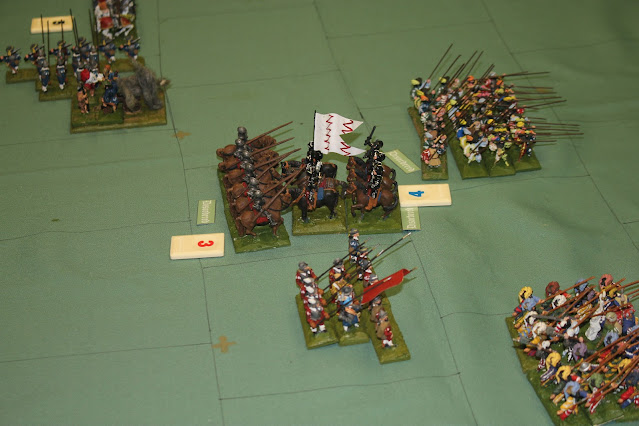 On Tim's wing the gendarmes and reiters continue to tough it out, whilst the Catholic Swiss and Landsknecht surge forwards. Richard is shouting "They're our best troops! Get them involved". He's not wrong, and it's a shame I applied the large unit rules incorrectly to their detriment. 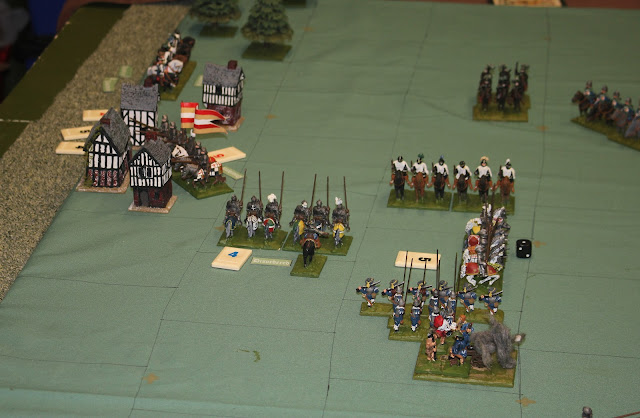 Phil routs one unit into Blainville and follows up. He pushes back another, who retire out of the way. 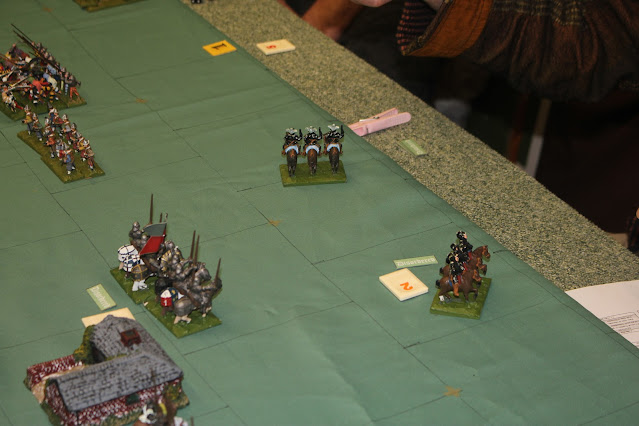 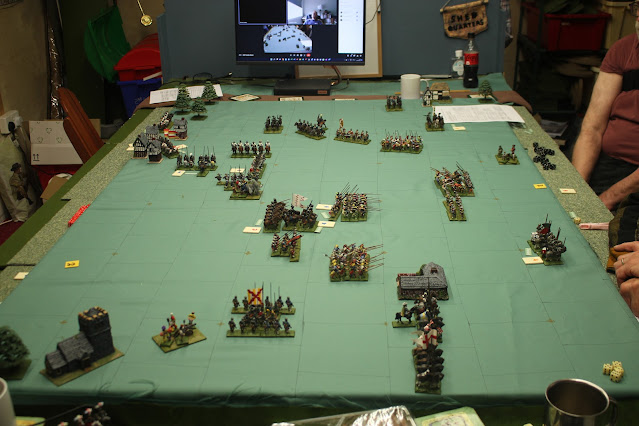 It looks chaotic. It was. 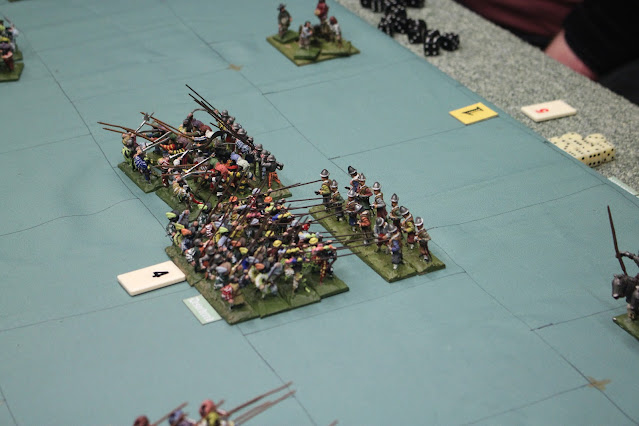 Whilst the Huguenots bring up their Landsknechts, the Swiss launch a charge on the Huguenot arquebusiers. Their defensive fire is effective. 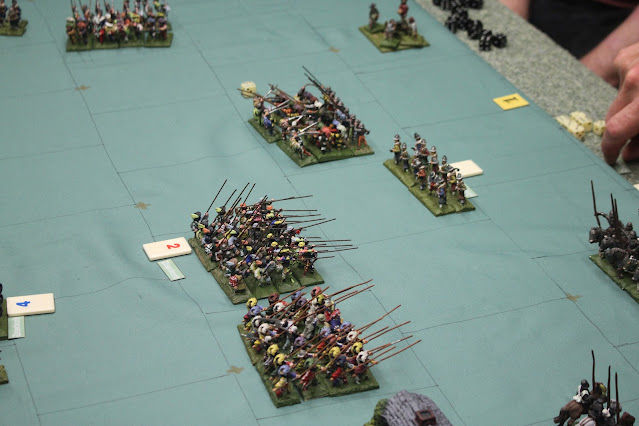 So much so that they then WIN the melee, and the Swiss are forced to retire. 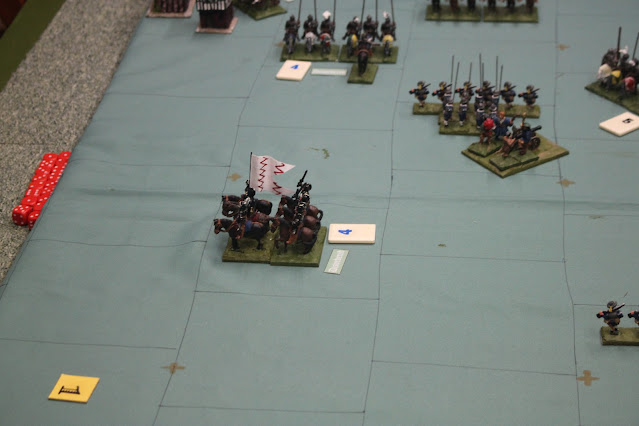 Tim's other reiters beat their gendarme opponents and pursue towards the table edge. 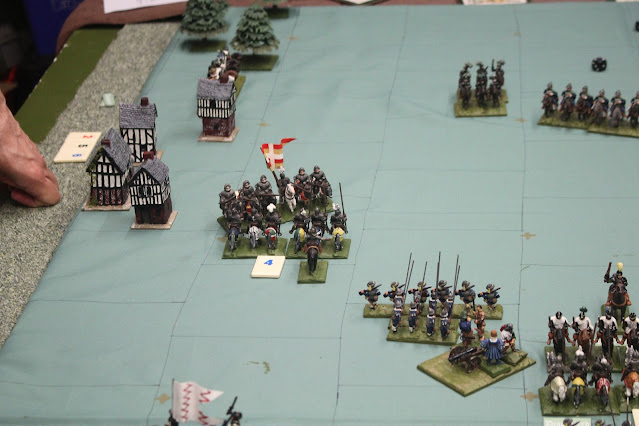 Phil charges out of the village in Disorder (very Gallic) and on the right of the picture his gendarmes push Tim's men back. 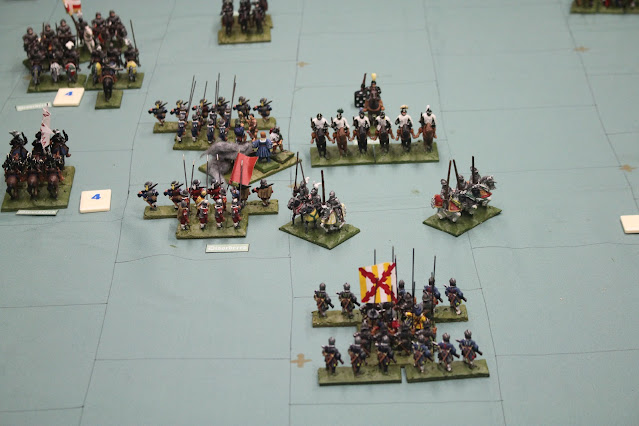 Phil's Millers break them in the next round of combat. Tim has positioned the Tercio of his Spanish allies to stop them rampaging all over his wing. 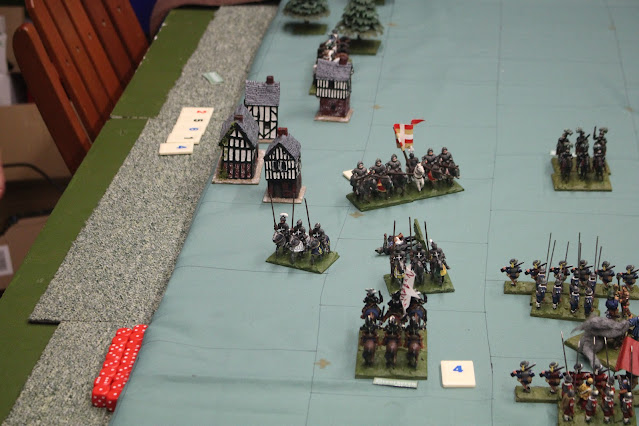 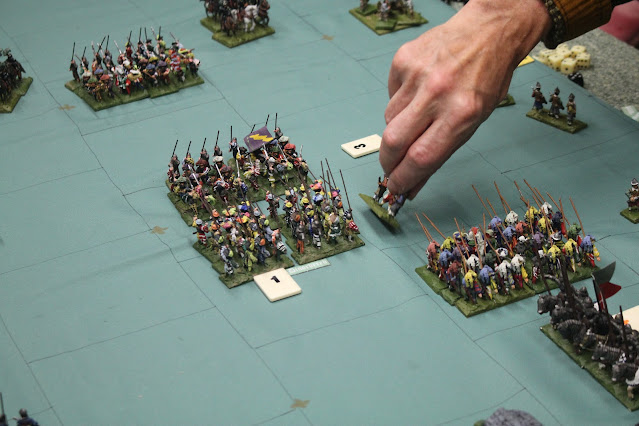 As the Swiss and Landsknechts grapple with each other, the gallant Huguenot foot is overwhelmed by the Catholic German Mercenaries. 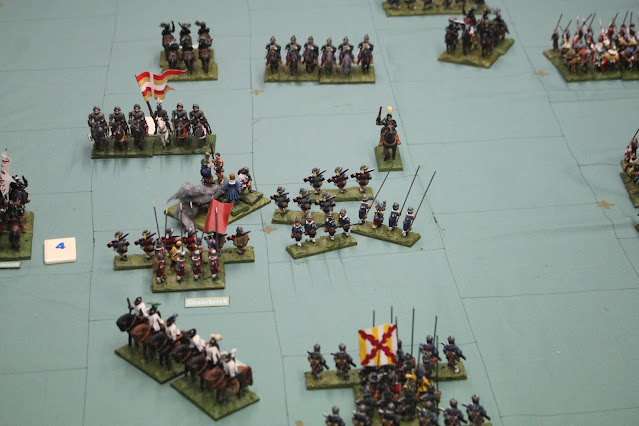 The Catholic centre is collapsing quite badly. 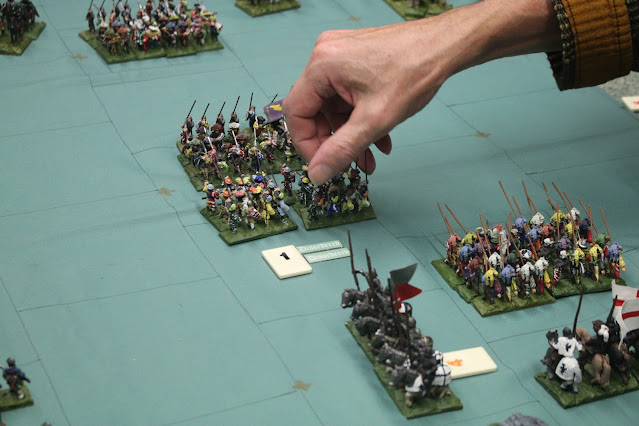 And then their Swiss decide to retire as well. That's it for the Royalists.
As night falls the Huguenots have control of the field and the Catholics retire, covered by their Spanish allies and their remaining landsknechts, supported by their last two gendarme units.
Not a bad recreation of the battle. The Huguenots lost historically, but came very close to pulling off a major victory. Their major problem would have been there wasn't an umpire short changing their Swiss. Whoops.
BI with mods looks to me to work very well for this period. I will use them again, and I shall go back to squares, pure and simple. The surgery required isn't major, but I do need to look at troop classifications and elite status. I kept all gendarmes the same for this game, and made the Huguenots elite. That meant they ignored 1 hit per combat and had a +1 modifier in the Cohesion test. It doesn't look much on paper, but it makes them pretty much unstoppable. I need to have two grades of gendarmes instead I think.
I also got the large unit rules wrong, and also should have applied bigger modifiers to the shooting/melee of regular infantry with musket & pike.
Which is a way of saying that I will use these again with changes, but not enough to make me able to claim I've written a new set and can publish them. The core VBU/Impetus mechanism is great and I'd want to keep that, so anything I published would look like a straight rip off. Which would be correct.
Footnote. The reading I referred to above is two books from Helion. These are The New Knights and One Faith, One Law, One King.

The former is about changing cavalry tactics from about the time of this battle to the end of the 17th century. It is by a French writer so has a good European context. It suffers from some Helionesque idiosyncrasies, but is one of their much better books. The latter is about French armies in the Wars of Religion. Both are very good books and thoroughly recommended.