Out on the road with the Northamptonshire Battlefield Society stand for the first time this year. Following Phil's stroke last year we've had to rebuild the team and revise our approach slightly. Phil was our point man on shows, using the many contacts he'd built up in his long career in wargaming and show attendance. Whilst his recovery continues he isn't back yet to firing on all cylinders, so until he is we've had to call in some new volunteers.

The set up team is now me, Chris K (seated, who helped out last year) and Vincent, the Society's Treasurer. Vincent describes himself as a figure collector, although we have inveigled him into playing a game or two with the MNG. He let slip part way through the day that this was the first wargames show he'd ever been to. 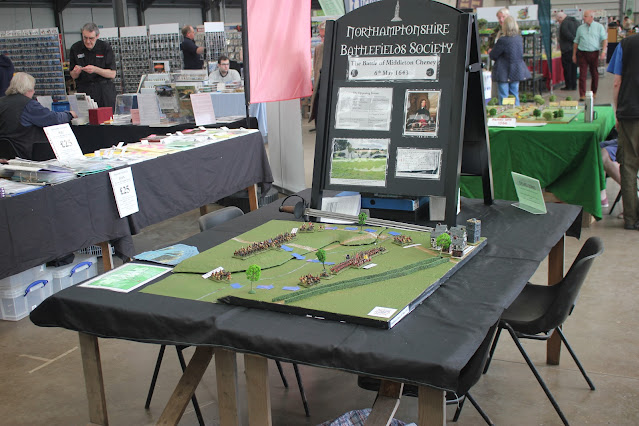 With our big display models which Phil built safely secured in his lock up, behind a lot of other stuff, I put together a 15mm model of the obscure ECW battle of Middleton Cheney, using my Peter Pig armies and some carved polystyrene. Phil's models have a lot more figures and look a lot nicer, but they really need him to set them up, and with his upper body mobility restricted they will have to wait until he has completed his recovery before we get them out again. 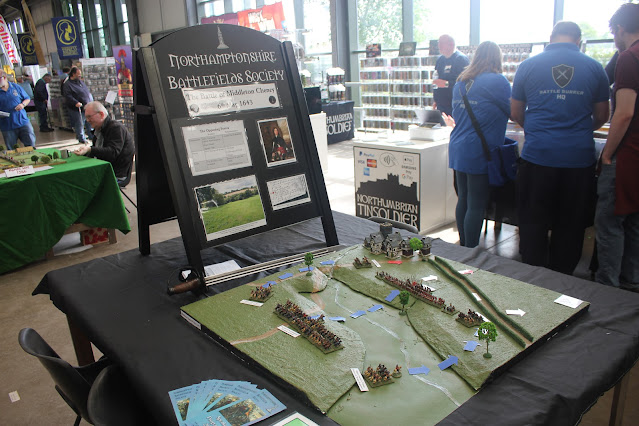 That said, I think this does justice to what is really a skirmish rather than a battle. The figure scale is about 1:10, and the board represents about 600 yards square. The first show with a new battle model is always a bit of a challenge whilst you work out what to say to people in terms of the battle narrative. 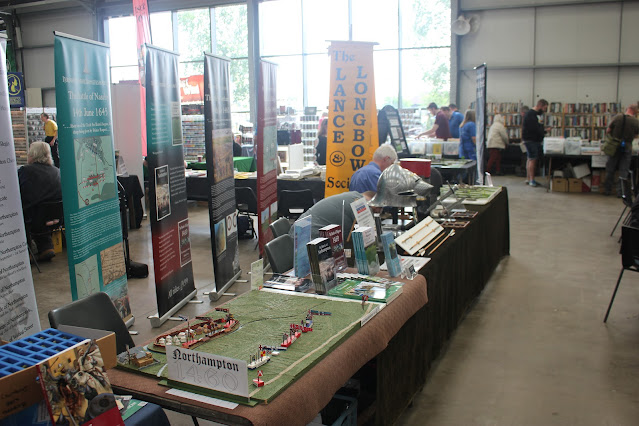 Chris and Vincent decided to bookend the stand with two battlefield models, which is a new configuration but worked quite well, I think.

We had a steady flow of visitors at both the stand and model. Vincent did sterling work as a newbie, and dealt with the interested and enthusiastic and the period bore with unremitting good humour.

I did a tour of the hall, which was replete with the normal 28mm+ table groaners.

The Billhook boys were out in force, with nice figures and a positive attitude to involving the public. 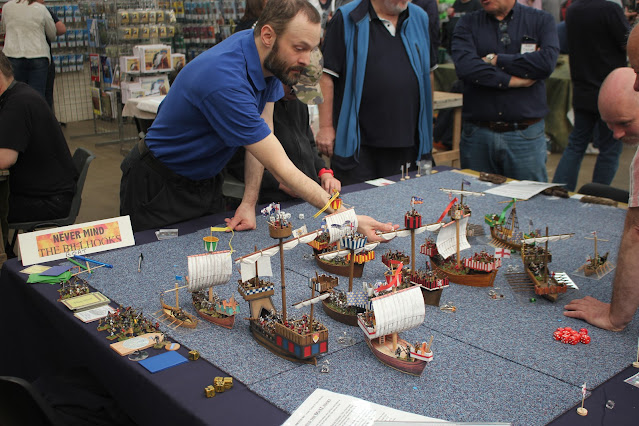 They were running a good looking sea-borne variant "Never Mind the Boathooks". 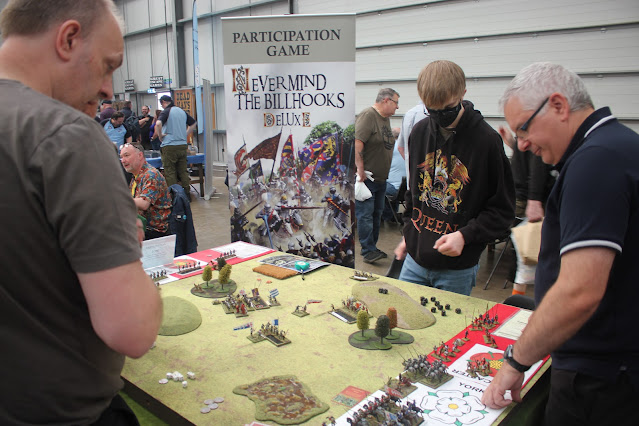 They were running a conventional game, too. I don't know what the battle is, but that's Lord Grey of Ruthin in the middle and there's lots of cavalry on the edge of the table. I suspect it might just be a small generic skirmish designed to show the rules off to their best. 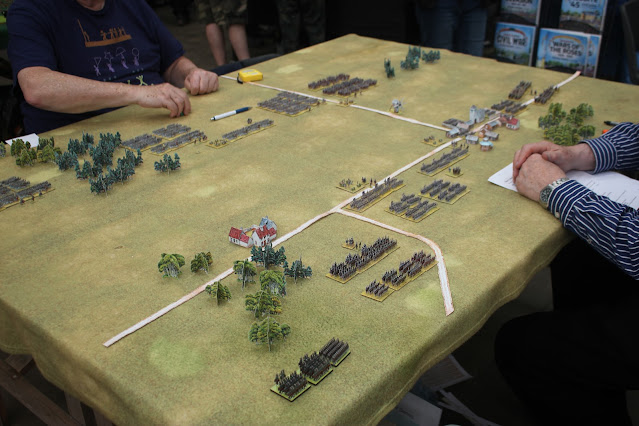 Two guys were playing a Napoleonic game with a combination of Paper Soldiers and Wofun. 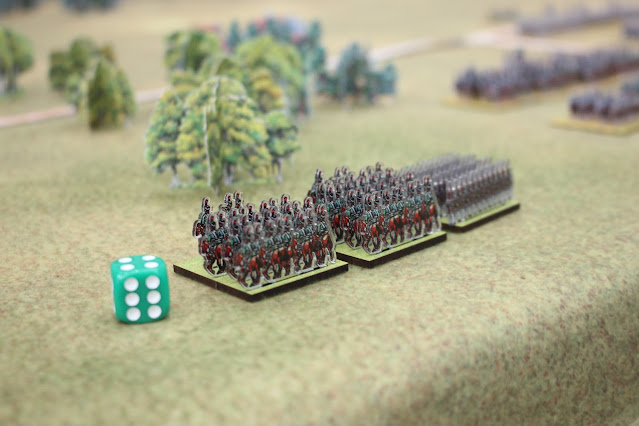 As you can see they had shrunk the figures right down. I think I prefer the paper ones. 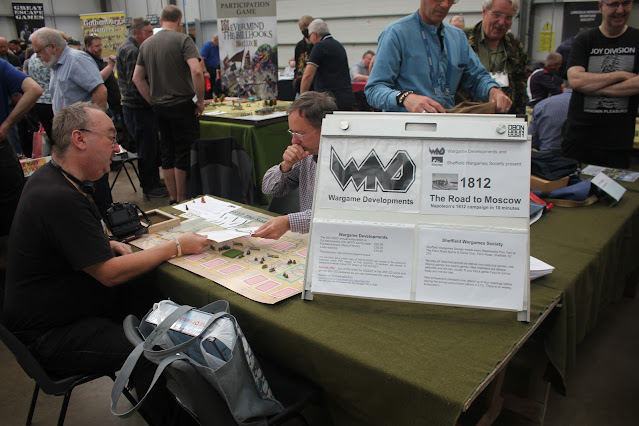 WD were there with 10 minute 1812. They had a lot of people play the game, and they are well manned to take the time to talk to people. 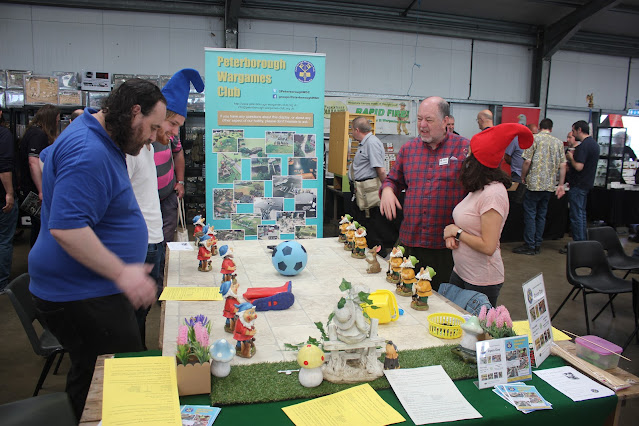 The Peterborough boys were there with Garden Gnomes. Well, why not. They usually do something innovative. I couldn't pause for long, but it looks like they were using the paving slabs for area movement. And they have nice hats.
[On a side note, Peterborough used to be in Northamptonshire. One of the county's stately homes, Lamport, is where the English Garden Gnome Craze started in the 19th century and they have the oldest gnome in the country. The Peterborough team were not aware of this.] 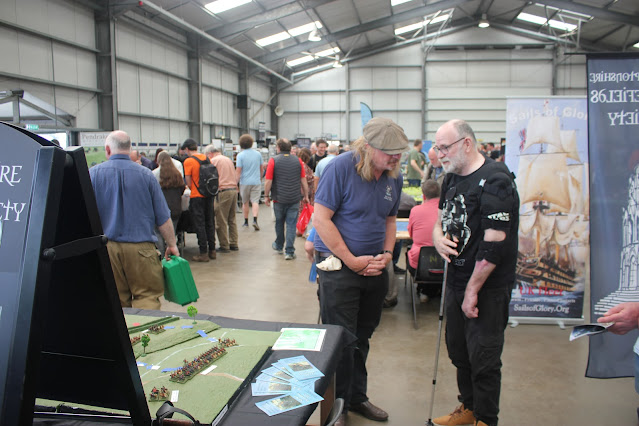 Phil joined us once we were set up, courtesy of our other Chris. He did a turn talking to punters and catching up with old friends. The good wishes and concern shown by other members of the hobby was quite touching at times.
It was a very busy show. One of the organisers said they'd had one of the biggest door numbers ever.
I checked out the trade stands, who all seemed to be doing good business. Considerable evidence of wargamers severely missing out on the opportunity to bore traders to death over the last few years.
I had no real intentions of buying much - except for one beauty I'll discuss later - and I didn't pick up any books for the first time ever. I don't get what Helion are playing at. The books on show I was interested in are cheaper online from their own website. Surely if you've carted all the stuff to the show you want to sell it don't you, not have someone go and sit down and order it on line from their mobile phone (not that I did, having left mine at home)?
The price of 1/72 plastics has spiked due to Vladimir, and I baulked at paying £9 for a box. Then I thought, get 'em while you can: 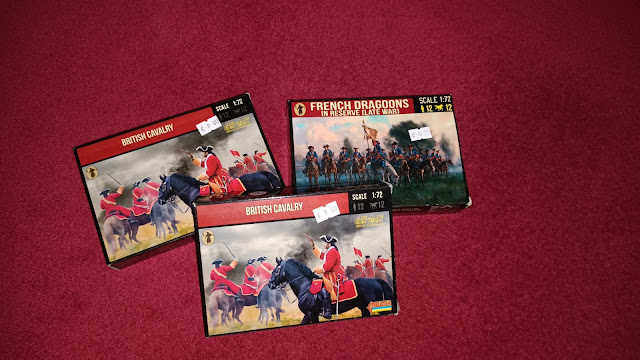 So I picked up some WSS cavalry. Not sure what units they are for yet. The dragoons were a bargain at £8.25.
Next to the Syborg 3D stand, to pick up one of these: 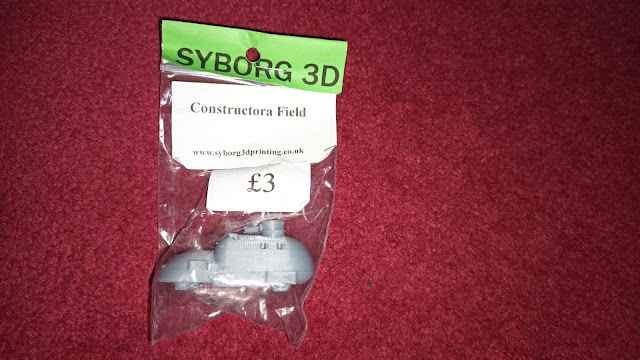 Whilst I have way to many armoured cars for the SCW, who doesn't want the one that looks like a jelly mould. I can justify this in case I ever do a Barcelona Anarchist game.
Finally I hadn't realised that Syborg do WW1 aircraft. They are inexpensive and only require you to glue the two halves together. So, cheaper and easier to build than the Skytrex/Red Eagle alternatives. 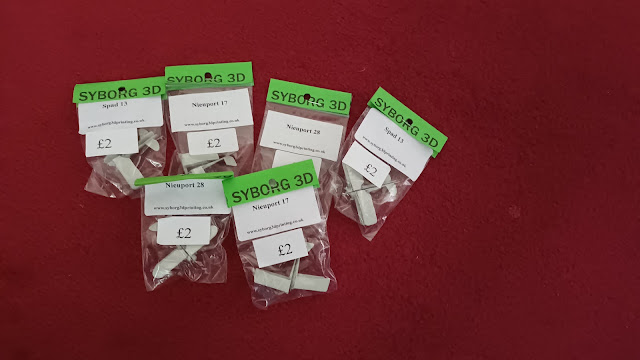 Consequently I bought a load to bolster the air forces for my RCW armies. All round I was pleased with my haul.
On top of all of that we had a good clear drive there and back, and were comfortably home in time for dinner.
In conclusion a good outing for the team all round. I'd have rather that we didn't have the Middelton Cheney model in a main walk way, especially as there were a few wheel chair / mobility scooter users at the show. Previous years we've been opposite our main stand, but as we had downsized the table requirement they were able to tuck us in a place other games couldn't go.
I expect we'll be back in October.
Good to be out on the road.
Middleton Cheney Partizan